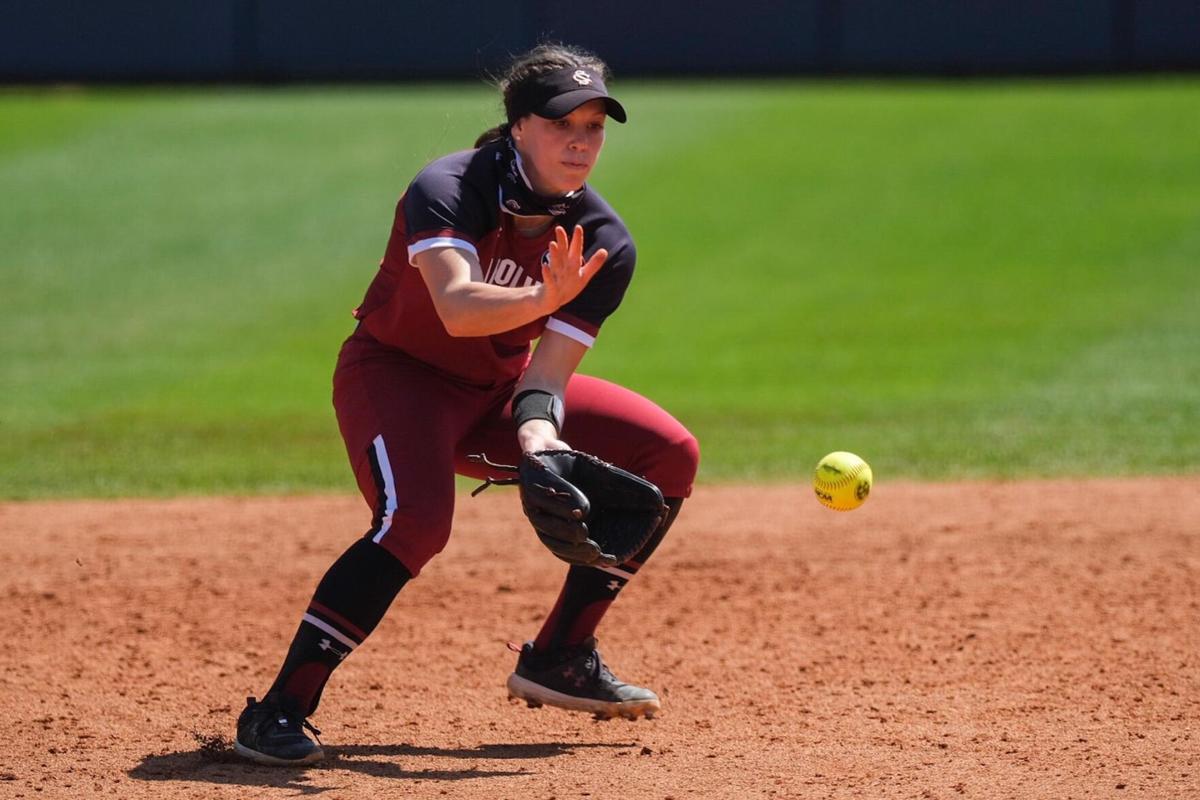 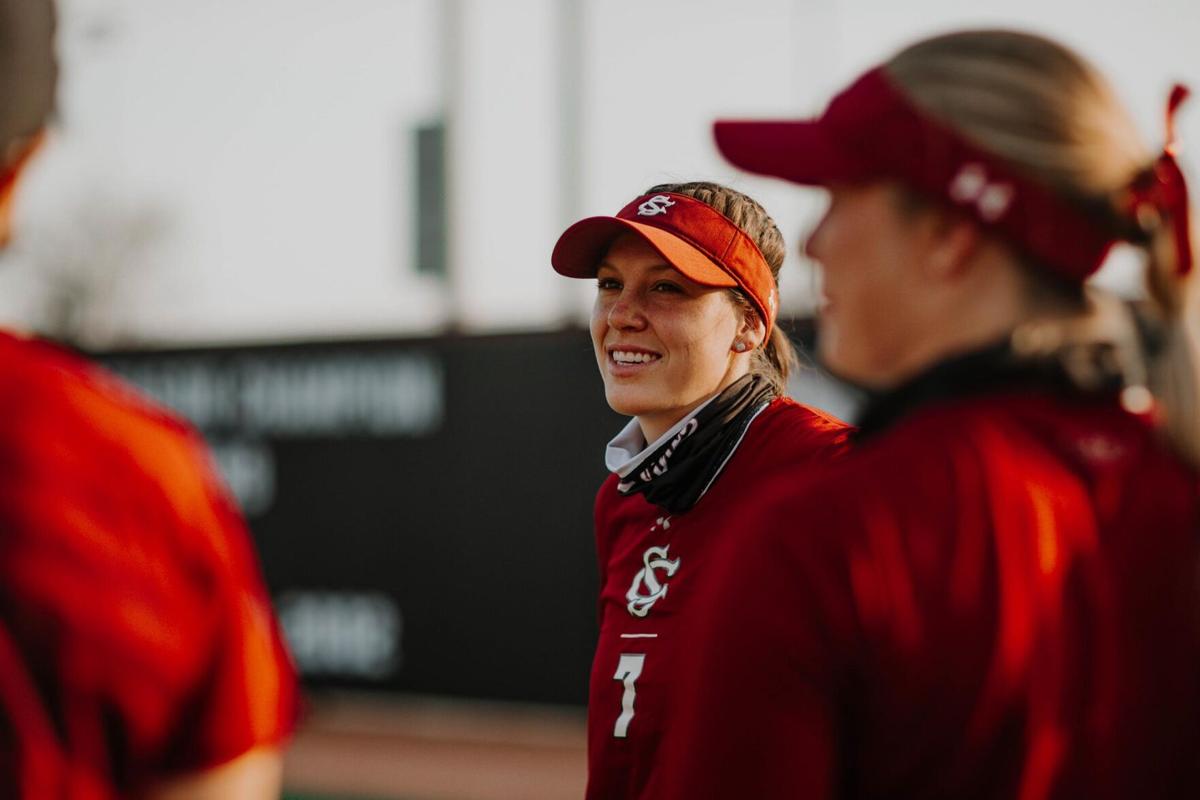 Mackenzie Boesel (7) is tied for the most home runs in South Carolina softball history with 33. File/USC Athletics 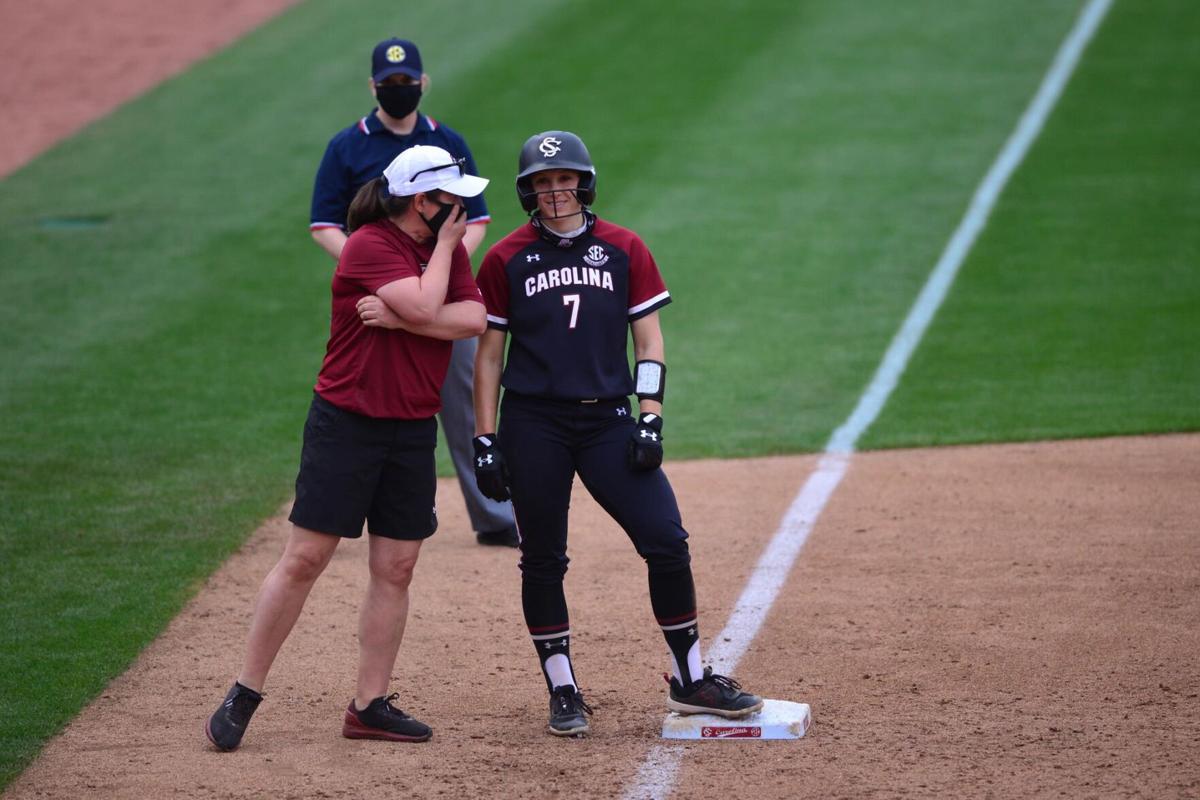 COLUMBIA — You don’t think she wanted to?

Mackenzie Boesel knows she’s currently in a three-way tie atop South Carolina’s career home run list, although as she said, she doesn’t recognize herself as a record-holder until it’s all hers. Standing at the plate with one on and one out against Furman in the fifth inning of a 1-1 game on April 14, she could imagine that neon yellow softball sailing out of Beckham Field to relegate Alaynie Page and McKenna Hughes to second place and make herself No. 1.

But the Gamecocks, in a rare scuffling season, needed to win, and while a homer certainly would have accomplished that, Boesel didn’t also become the Gamecocks’ career leader in doubles and walks by not knowing the percentages. Her swinging bunt was misplayed, she reached base, then Cayla Drotar drove in the go-ahead run a batter later as USC pulled out a 4-1 victory.

“Mack makes it easy. She doesn’t make it about her,” USC coach Beverly Smith said. “She could have been up swinging for the fences. She drops a bunt because she recognized we needed a runner on base. She’s just gone about being a great teammate and doing what the situation calls for.”

That’s being a leader along with the three other graduates who decided to return this season after COVID-19 wiped out last season. That’s calling a players-only meeting after the Gamecocks, who have reached a program-record seven consecutive NCAA Tournaments, began SEC play 0-11. USC broke through with a final-day win at Ole Miss last week, propelling it into a doubleheader sweep of Furman and a massive series hosting No. 19 Tennessee this weekend.

That’s being the same star player she’s been for each of the past four seasons, a four-year starter at second base and also USC’s career leader for assists by a second baseman. It’s been a terrific individual season for Boesel thus far, but she’s the first to say she’d give away every one of the bushel of awards in her personal satchel.

“I’d definitely take a few wins and trade them right now,” she said.

It hasn’t been easy seeing a team with this much talent struggle the way it has, although there’s plenty of season left, and with the Gamecocks’ track record of NCAA berths, a late charge could keep the streak alive. Boesel, who challenges for another school record every time she picks up a bat, has had to readjust her thinking.

This was going to be a year of highlights, start to finish. Boesel was going to return to USC last fall anyway to complete her master’s degree in Sport and Entertainment Management, so when the NCAA granted everyone an extra year of eligibility, she had the perfect opportunity. Finish school, take a few electives to cruise through the spring and play another season.

Instead she’s had to be more of a teacher, a mentor, a guide to the whopping 10 freshmen on the roster, instructing them in the day-to-day intricacies of being a Division I athlete and stressing that the group of soon-to-be departees is leaving the program in the new class’s hands. Doing that in a winning season is difficult.

Doing that when the Gamecocks started 0-11 in conference was a comprehensive exam in patience.

“Of course it’s hard. We want to win and we want to do well,” Boesel said. “But we know how good this team can be and we know what we have so we’re just waiting for that turning point and I think we saw it at Ole Miss. I’m really excited to see where this team takes it to the rest of the SEC.”

Smith has turned every stone she’s found and was happy to see the players take action with their own meeting, but has preached the same message throughout. It’s not where they started.

“We’ve talked a lot about believing in the way this story can end,” Smith said. “I know it doesn’t feel the same as it has the last few years. We’ve had to go through some tough times.”

Boesel has had to put on a cheerful face while a despondent team celebrated her records when they were notched, although each party quickly returned to brooding over the losses. She definitely appreciated it but was wishing for more of the post-win gatherings.

“We just try to point out the fact that we are good. That we’re here for a reason,” Boesel said. “I try not to think about the individual stuff and focus more on the team stuff because I know if I’m focused on the team and doing what I need to do to win, then that stuff’s going to come with it.”

Smith tries not to think about the inevitable day.

“Sometimes I look out there and think about, ‘What am I going to do without Mackenzie Boesel on the field next year?’” she said. “She has been a staple for this program. Talk about somebody who came in prepared and ready. She would be the most prepared athlete I’ve ever coached.”

But she will also recognize what a stalwart Boesel has been. Another record she is pursuing is becoming the first four-time Academic All-American in program history, and if she does so, she’ll do it with a 4.0 grade-point average throughout.

If there’s any justice, Boesel will nail her final exams, then swat her record-setting 34th homer as the Gamecocks complete their resurrection and make the NCAA Tournament. It would be a perfect ending for a model student-athlete.

And if she has to again choose between a chance at that home run or sacrificing herself to enable a victory, she’s already decided.

NO. 19 TENNESSEE AT SOUTH CAROLINA