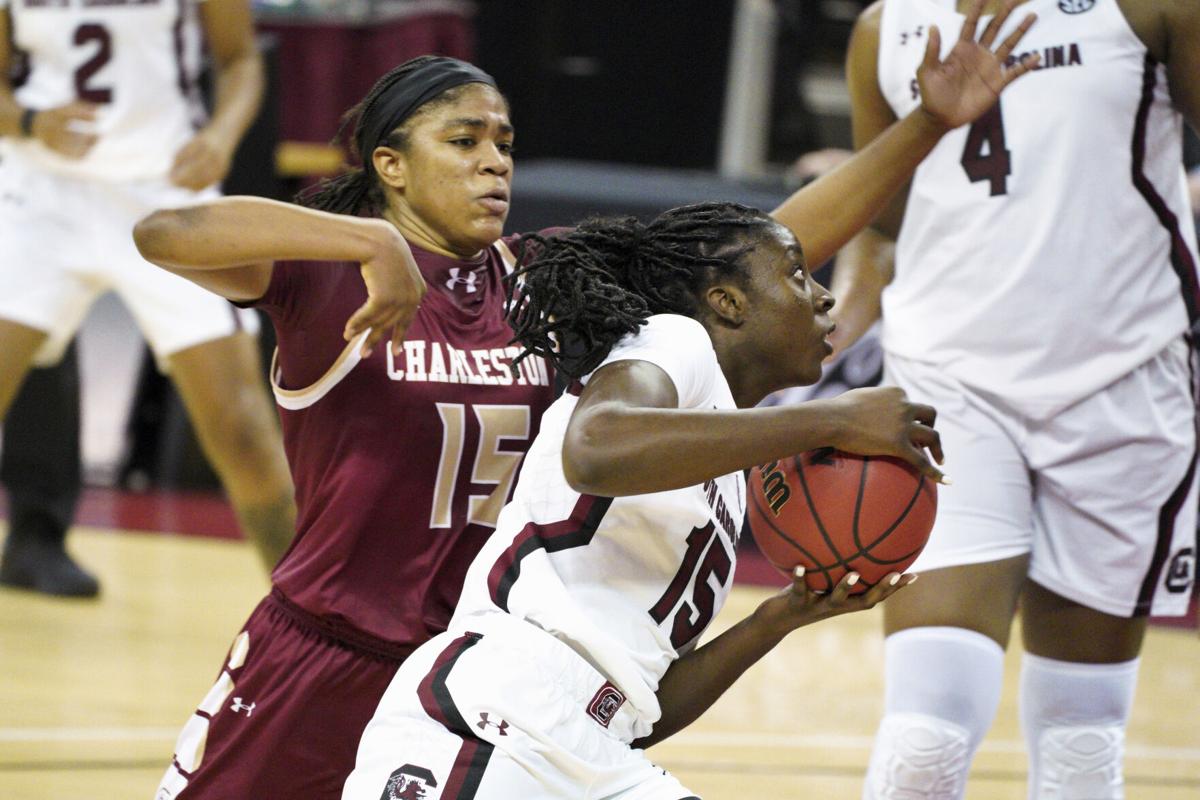 Laeticia Amihere was at full strength as were the rest of the No. 1 Gamecocks in a season-opening rout of College of Charleston on Wednesday. Sean Rayford/AP 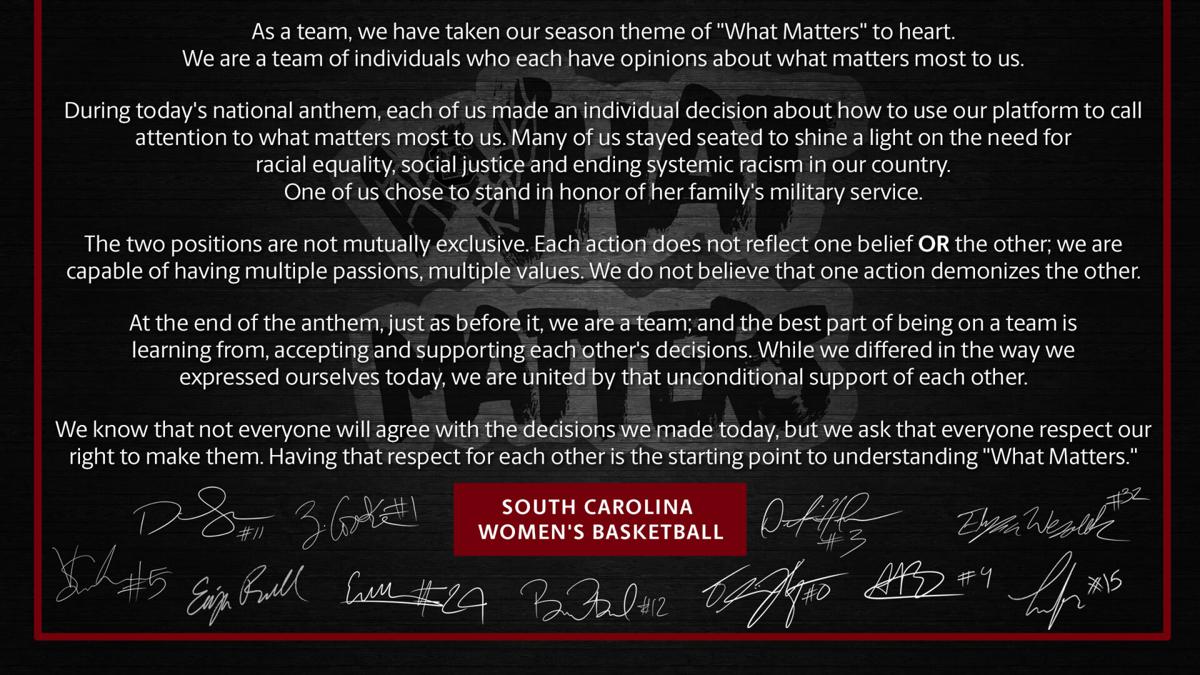 The Gamecocks released a statement before many kept their seats for the national anthem. File/USC Athletics

The top-ranked Gamecocks eased into the season with a 119-38 drubbing of College of Charleston, extending their school-record winning streak to 27 in front of a sellout crowd of 3,500 (limited because of COVID-19).

Now the Gamecocks head to South Dakota for a three-game tournament this weekend. Coach Dawn Staley, eager for this moment ever since the pandemic scuttled her chance to hang a second national championship banner in Colonial Life Arena, was thrilled to get back on the court but had to eye it with a coach’s view.

The result was never in doubt, not with three starters, including National Player of the Year candidate Aliyah Boston, playing for her. But it was different.

There was no more Ty Harris at point guard, a four-year starter who dazzled with elegant simplicity and instinctively knew who, when and where to pass to even if she never saw a lane. Ditto the ferocious passion of Mikiah Herbert Harrigan, a forward who started every game last season and was as lethal with her rebounding and post jump shot as she was with her hair-trigger temper.

Could Shane Beamer be Gamecocks' next football coach? Former USC players hope so.

Different doesn’t mean bad. As much talent as Staley knew she had going into last season, she was putting three freshmen into the starting lineup. There was no telling how that would work, as even the legendary A’ja Wilson, the current MVP of the WNBA, only started one game as a freshman (and it was not good).

Staley’s experiment worked well. Really, really well. Boston was a unanimous National Freshman of the Year while Zia Cooke and Brea Beal combined with Harris and Herbert Harrigan to post a glittering 32-1 record.

This year, there was no curiosity. The chemistry stayed intact despite losing Harris and Herbert Harrigan, the team filling its spots and at least staying constant with its “all for one, one for all” mantra.

The effort and gumption weren’t questioned Wednesday, but the play could have been sharper. The Gamecocks started the second half with their 10th turnover, something that never sits well with Staley, the measuring stick for all point guards. Boston was basically ignored, but because of how the game proceeded — USC was constantly running past the overwhelmed Cougars, removing the need to set up in a half-court offense and dump the ball to its star player.

What did Staley think after seeing her players in action for the first time in months?

“There’s a lot of talent, no doubt about it on our team, but the things that separated us was the intangibles,” Staley said. “I do believe our players who are on the roster now will have to grow into that. Until they get some experience, I hopefully don’t want it to be an experience where we lose.”

There was no chance of that Wednesday. The Gamecocks led by 17 points before Charleston ever scored.

“I know I just have to help be a leader on the team, and that’s what I’m doing,” Saxton said. “COVID messed a lot of things up for everybody. Really exciting to get back on the court and back in the feel of playing the games.”

Fifteen turnovers glared, but the domination in transition, rebounding and ability to score was more than enough. The Gamecocks will play three games in three days beginning Saturday with more chances to smooth any wrinkles.

“We gave up 18 offensive rebounds. It’s not the number, it’s how. They were taking balls out of our hands,” Staley said. “You see the void of a Ty Harris, because Ty Harris can have those kind of conversations in the locker room and the huddle. As coaches, we have to fill the void until everybody picks up something they can be responsible for.”

Every player except junior Elysa Wesolek remained seated for the national anthem. The coaches and support staff stood.

The team put out a statement at the same time.

“Many of us stayed seated to shine a light on the need for racial equality, social justice and ending systemic racism in our country. One of us chose to stand in honor of her family’s military service,” the statement read. “We know that not everyone will agree with the decisions we made today, but we ask that everyone respect our right to make them.”

Staley wasn’t sure if the protest would continue this season.

“I haven’t even gotten that far, I wouldn’t be surprised if it’s not,” Staley said. “I guess we’ll see on Saturday. I think our players understand in doing that, that it’s going to cause some angst somewhere out there. They’re ready to answer the questions that will come with that, and they’re ready for the pats on the back that come with that.”