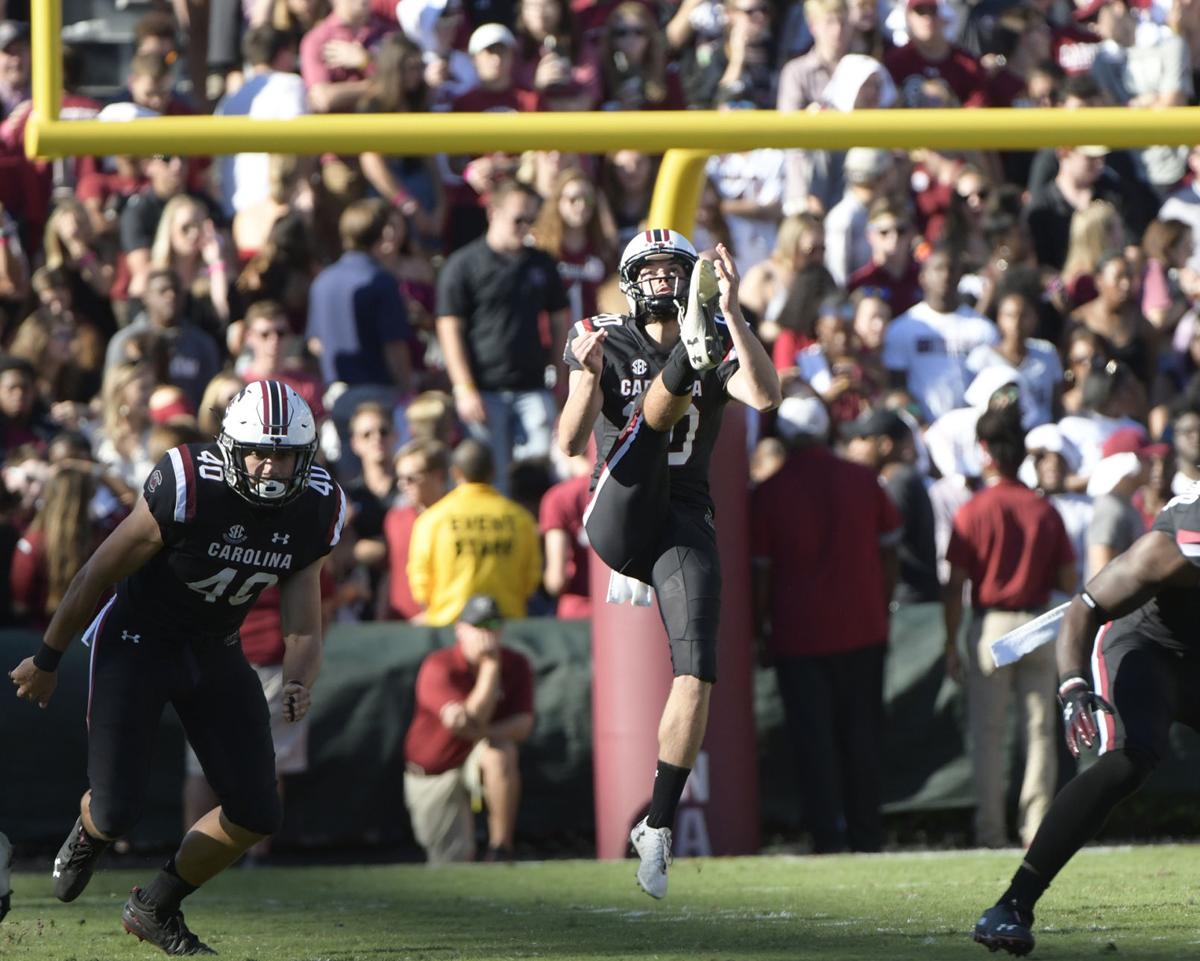 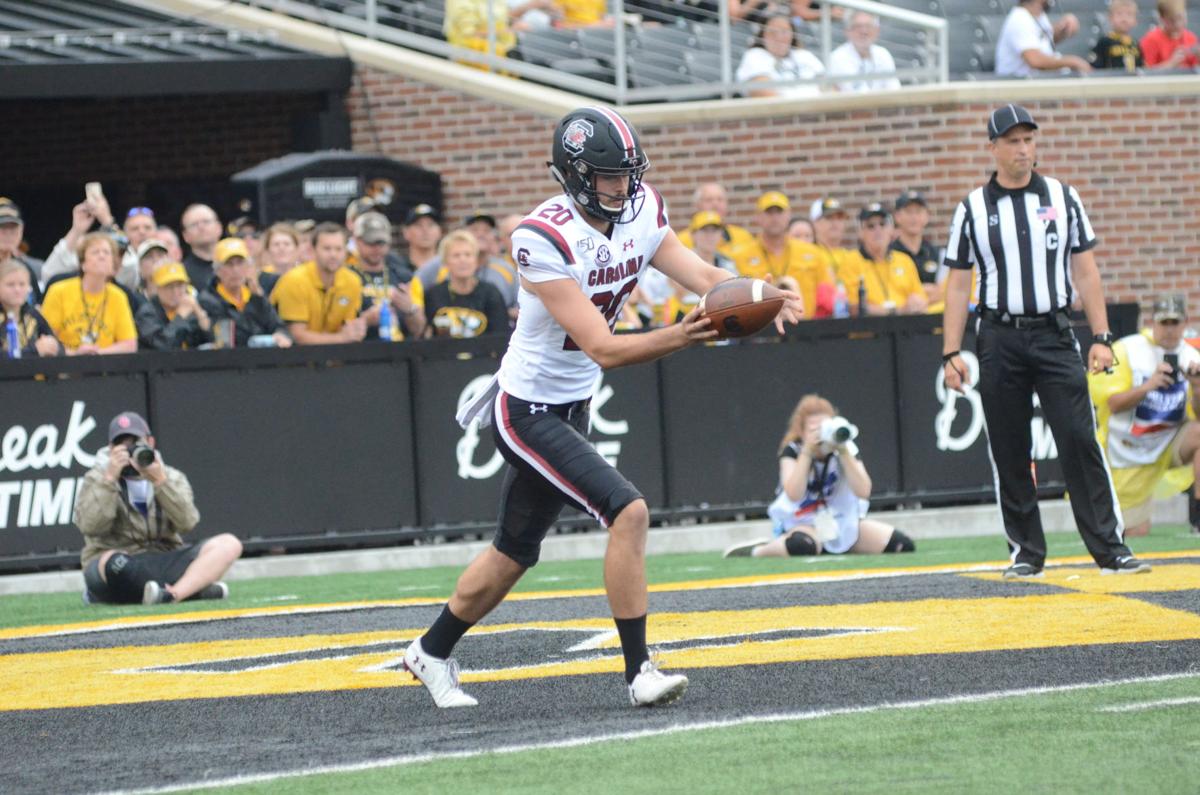 Joseph Charlton is on his way to the NFL. USC Athletics/Provided

COLUMBIA — That nobody will get specific lets you know there’s something.

“He was a little joker in the room when he was there,” receiver Chavis Dawkins says.

What kind of jokes?

Dawkins wouldn’t say. Neither would center Donell Stanley. Nobody would elaborate on the gags that South Carolina punter Joseph Charlton pulls.

He’s always got his hands in some practical joke or another, but darned if anybody will describe them. They must be that good.

“If it pops in my head, I’ll do it,” he says with a mischievous grin and that I-know-something-you-don’t tone.

Maybe that’s the punchline. Sauntering into the room at 6-foot-5 and whippet-thin, nobody would guess this guy is one of the best punters in college football.

His hair long up top, buzz-cut on the sides and advancing toward a mullet in the back, a dark bushy beard and a gnarly scar rising from outside his right eyebrow into the uncharted terrain of his forehead, Charlton looks like he just sold you a mess of red wigglers down at the bait store. Other than banging footballs around the indoor practice field, that’s what he’d rather be doing anyway.

“(First time I met him), I remember seeing him in his green truck and he was asking me to go to the lake with him,” said Stanley, an avid outdoorsman himself. “We do some good stuff. He’s got a boat, so ... ”

They all say the same things about him: Heckuva guy, that Joseph Charlton. When he isn’t fishing he’s joking around, and when he’s not joking around he’s fishing.

And punting. Between reeling in bass and plotting his next knee-slapper (not to mention the secrecy of the pranks afterward), Charlton is a heckuva punter.

He already owns the Gamecocks’ career punting record (45.2 yards, a number that could always drop but doesn’t seem likely considering the way Charlton is drilling them these days). He’s second in the country this season with a 49.8 average, and just won SEC Special Teams Player of the Week after his leg got more airtime than the dance team against Kentucky.

Charlton was marvelous against the Wildcats, cracking nine punts for a 51.2 average with four over 50 yards, including a season-long 65. Five times he pinned Kentucky behind its 20 yard line and shrugged away the strain, remarking, “It’s nothing the ice tub can’t fix.”

Of course, USC always knew how good he was. Punters don’t get put on scholarship as true freshmen because of their quirky personalities.

Although that came hand-in-hand, or toe-to-toe, with Charlton.

“He was always up to something, always had a sneaky smile on his face,” said Reggie Shaw, the Byrnes High coach who was Charlton's head whistle at A.C. Flora. “My first impression of him was hearing the football coming off his foot, sounded like a cannon. I was looking around to see if anybody shot at us on the practice field.”

Shaw saw a goofy and laid-back stringbean who could do just about anything athletically. He played soccer, basketball and could run 40 yards in 4.6 seconds, but he really stood out at football. Simply, Charlton could kick the daylights out of the ball, once booting one 73 yards just in the air.

Kickers are expected to have a few loose screws anyway, since they’re usually practicing by themselves with minimal supervision, and Charlton was no exception. Shaw saw right away he had an All-Star Space Ranger as well as an All-State punter.

“We had a code that when we were going to fake a punt, I’d give him a thumbs-up,” Shaw said. “He decided in a big ballgame against Chapin for the region championship to call a fake on his own.

“It’s a good thing he got the first down.”

Shaw coached a quiet kid who took some time to come out of his shell, but was always observing the people around him. Given free reign with his teammates to do impressions of their coaches, Charlton slayed with his Shaw imitation.

Signed under Steve Spurrier, Charlton’s first year wasn’t pleasant. A bad back pretty much forced him to redshirt, then Spurrier quit mid-season and the Gamecocks stumbled to a 3-9 record. Will Muschamp was hired but Charlton was stuck behind Sean Kelly on the depth chart in 2016.

Sapakoff: The Gamecocks should redshirt Will Muschamp, look to 2020

Muschamp didn’t get any attitude from Charlton but he never could tell if Charlton was listening or just being standoffish.

“I don’t know if he totally bought into the new staff and our way of doing things, which is fine,” Muschamp said. “It takes people time, sometimes, to win ’em over.”

Charlton agreed: “I hadn’t really adapted yet, I guess you could say.”

Since then, he’s flourished. His last two seasons have placed him among the SEC’s best, and his senior year is earning NFL buzz. Along the way, the Gamecocks have found what Dawkins calls a good dude to be around.

“That was my roommate my freshman year. It was pretty fun,” Dawkins said. “He wasn’t really there in the room, he was always with girls … don’t tell him I said that.”

“Ah, man … number one, he’s one of my favorite guys on the team. Great personality, loves fishing, loves hanging out, just a really good guy and an outstanding punter. As good as I’ve ever been around,” Muschamp chuckled. “Since that time he decided to buy in and be a part of what we do and how we do things, he’s been awesome.”

The scar near his eyebrow is a result of four stitches after taking a knee to the face during preseason camp, though not during practice. Charlton says one of his goals is to get a few more tackles so he can “lower the shoulder, man.”

His interview over, Charlton plopped a Simms Fishing Products mesh ball cap on his head, brim backward, and was off.