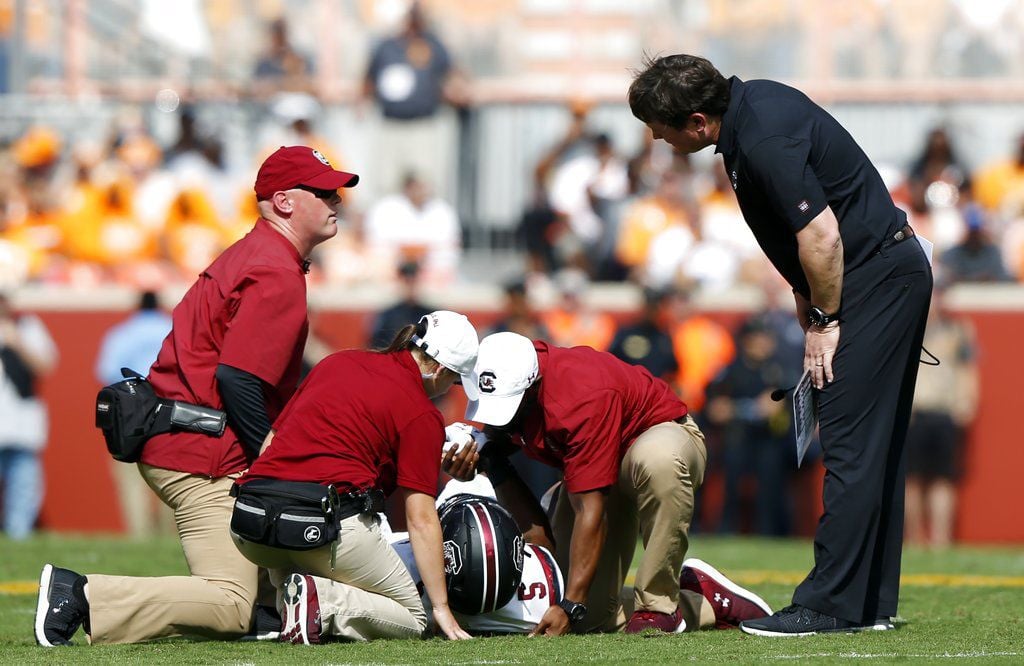 South Carolina head coach Will Muschamp (right) watches as team trainers check on an injured player. The  Gamecocks have been plagued by injuries the past two seasons. File/AP 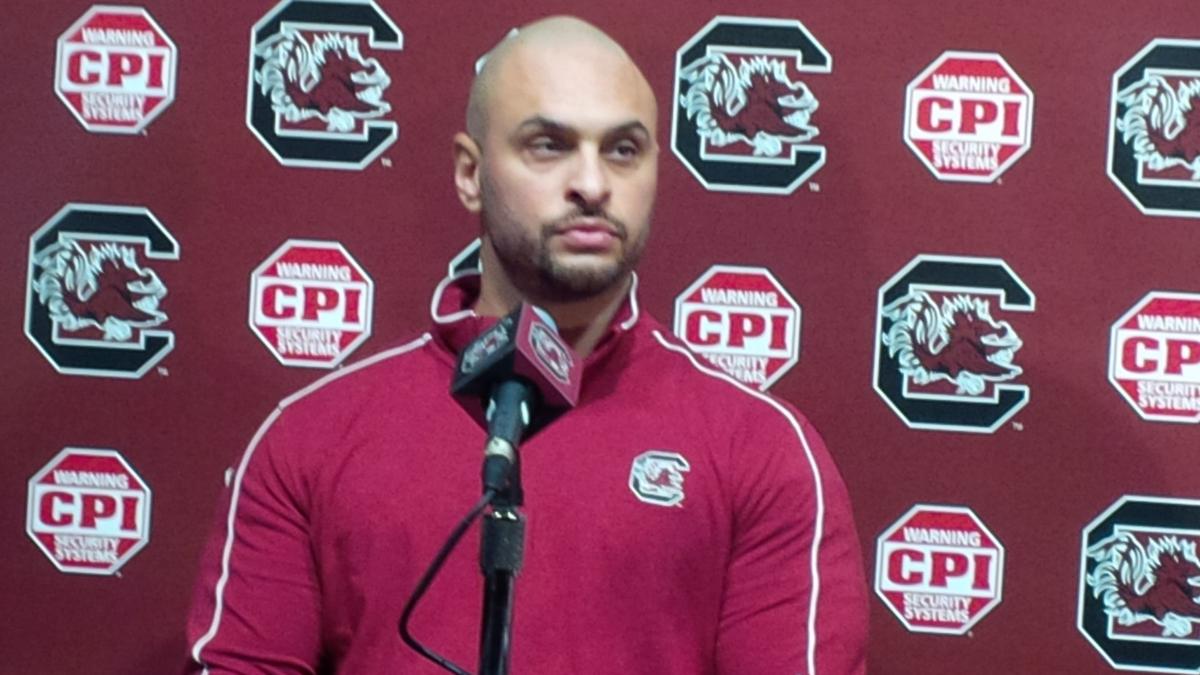 COLUMBIA — Nick Muse planted his foot, cut and felt his knee give. Dakereon Joyner was belted so hard, when the team doctor asked him how many fingers he was holding up, Joyner answered, “Delaware.” OrTre Smith was born with a condition in which his kneecap wouldn’t stay in place.

Those are football injuries or force majeure. Some of the South Carolina Gamecocks who have been waylaid by injuries the past two seasons could have been built like Mr. Olympia and they still would have gotten hurt.

But after two straight seasons in which the number of non-healthy players more than quintupled the Gamecocks’ combined wins, something had to change. It’s no use retooling the offense, defense and special teams if the players being counted on to run those systems are in the medical tent.

“Injuries are an issue everywhere. It's something that’s tough to deal with, it's one of the main things that we are charged to do,” new USC strength coach Paul Jackson said. “It's multi-factorial, it’s why it's so hard to predict or really nail down why something happened.

“Coming up with some new ideas, and looking at the acute-to-chronic ratio of loading and stressors, being able to really bring some new ideas to that, I think are things we're going to do to try to help.”

In 2018, as the Gamecocks devolved from nine wins the previous season to a 7-6 year, USC had 30 players miss at least one game due to injury, and 17 missed at least four games. The log was dominated by leg injuries (knee, ankle and foot).

In 2019, 29 players missed at least one game with 12 missing at least four. But the rise of soft-tissue injuries (groin and hamstring pulls, shoulder and neck strains) concerned coach Will Muschamp, who had experienced rampant injuries the year before and during his third season at Florida.

Strength coach Jeff Dillman was relieved of his duties.

“At the end of the day, I got to make decisions on what I think’s best for the organization and winning. None of them are easy,” Muschamp said. “(Dillman and fired quarterbacks coach Dan Werner) are two professionals and outstanding men and I hate that sometimes those things have to happen.”

Dillman couldn’t have prevented some of the injuries. And it’s always been Muschamp’s decision, not Dillman’s, to practice on Sundays when sometimes the Gamecocks were playing games until late Saturday night.

But in a season in which the Gamecocks only won four games, were beaten up throughout and had a bizarre period where the school president, Board of Trustees and athletics director either brazenly spoke about Muschamp’s job status and/or were forced to respond, the writing was chiseled into concrete.

Something had to change. The Gamecocks needed more stability and a new vision for their strength program, and Muschamp turned to a man he had seen during a November 2018 game.

USC outlasted Ole Miss, 48-44, in Oxford that day, but the wretched condition of the turf cost eight Gamecocks the rest of the game and most of them the rest of the season. Jackson was the Rebels’ strength coach.

Will Muschamp adds another Bulldog to Gamecocks' coaching staff

What can Jackson do? The support leading into the strength and conditioning program is top notch, as the Gamecocks’ nutrition is masterfully coordinated by Kristin Coggin, and the Long Football Family Operations Center supplies the team with much more than a state-of-the-art weight room.

There’s hydrotherapy, better equipment and the Catapult system, which monitors if athletes are truly performing at their peak. Jackson credited that technology, proper sleep, nutrition and hydration, but also mentioned what he hopes to do to alleviate the injuries.

“I fully believe that you have to have exposure, throughout the entire year, to high-speed sprinting to help limit some soft tissue injuries,” Jackson said. “You can't get away from it for extended periods of time and think that you can ask to go red-line during the season, or at any point, and you haven't been prepared for that.

They’ll run stairs, but not religiously. They’ll have the dreaded workout where only the barrels are set up around the corner of the field, and it’s considered failure if at least one isn’t a quarter full of vomit by the end, but not rely on it.

“You don't really get the exposure unless you add a track background,” Jackson said. “You may see a sprint workout, it’s got to be a quality-based type of workout. So it's not going to be guys throwing up, in that particular session. Maybe you allow longer rest periods, you make it competitive in nature, you let guys line up and race, and you do things like that to get close to their peak velocities achieved more often.”

There’s no crystal ball to look into that will reveal if a sprint-based regimen will help the injuries. The football team hopes it will.

If it doesn’t, and a third straight bad year is tied to several key injuries, there isn’t anyone else to blame. More changes may be necessary, those of the sweeping variety.