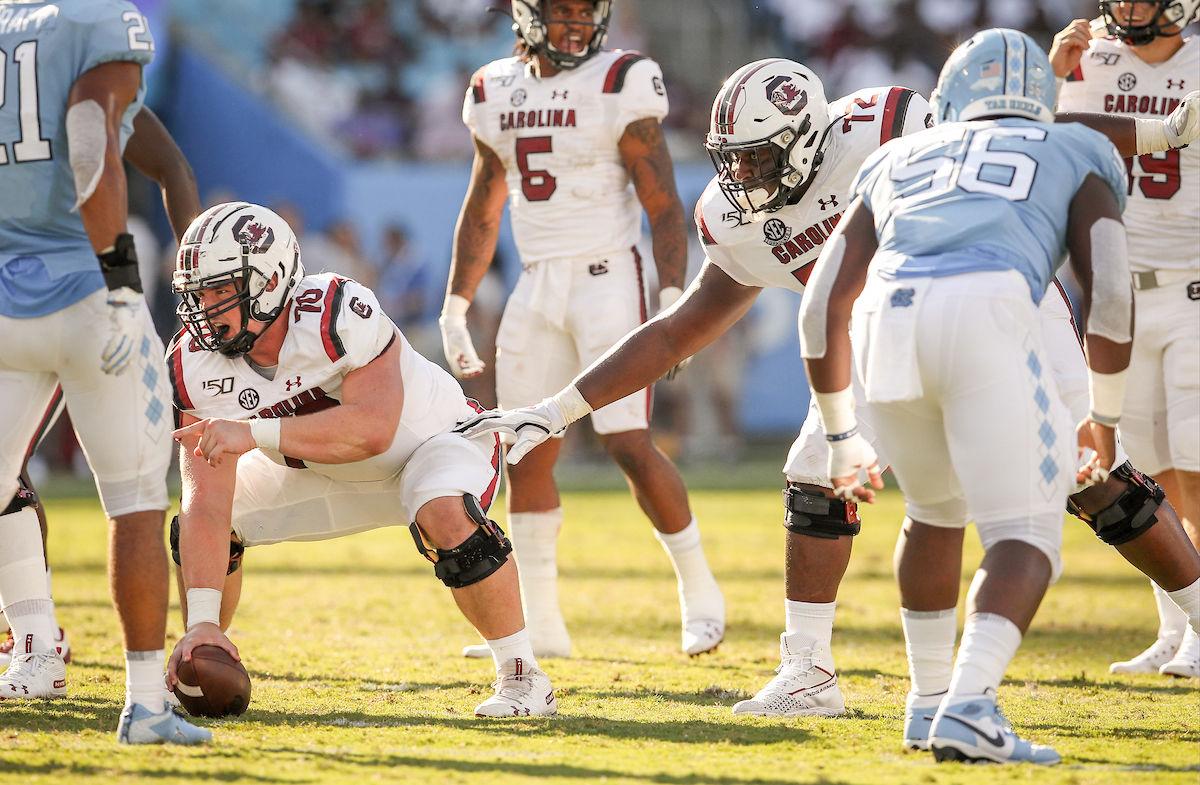 South Carolina offensive guard Donell Stanley (72) tries to get the attention of center Hank Manos during the Gamecocks' game against UNC. Miscommunication along the offensive line was a big problem in USC's season-opening loss. Travis Bell/Sideline Carolina 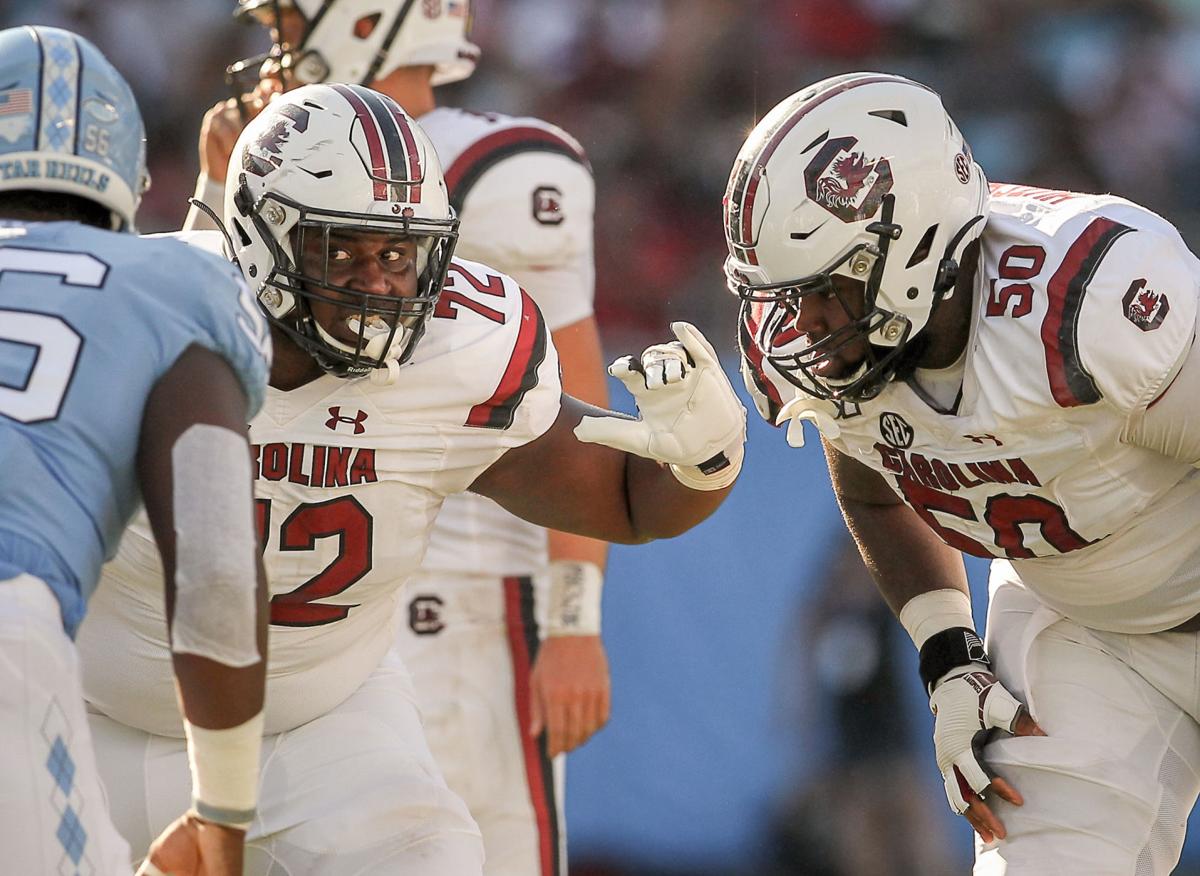 Donell Stanley (72) took over at center for South Carolina after Hank Manos struggled against North Carolina in the season opener. Travis Bell/Sideline Carolina

South Carolina offensive guard Donell Stanley (72) tries to get the attention of center Hank Manos during the Gamecocks' game against UNC. Miscommunication along the offensive line was a big problem in USC's season-opening loss. Travis Bell/Sideline Carolina

Donell Stanley (72) took over at center for South Carolina after Hank Manos struggled against North Carolina in the season opener. Travis Bell/Sideline Carolina

COLUMBIA — It wasn’t easy to admit they made a mistake.

South Carolina’s coaches fixed it the only way they could — by scrapping nearly nine months of plans and hoping the Band-Aid would hold for the next three months.

“We got too much push in the middle,” head coach Will Muschamp said after the Gamecocks’ offensive line was bullied throughout a 24-20 season-opening loss to North Carolina on Aug. 31. “It throws you off rhythm as far as the routes and things like that are concerned in the passing game, as well as in the running game.”

The Gamecocks thought they had the future settled when they started freshman Hank Manos at center in the Belk Bowl, moving Donell Stanley back to the guard position. That was the planned alignment going into 2019, Stanley filling the left guard spot while 2018 right guard Sadarius Hutcherson moved to left tackle.

Manos would stay at center and either Eric Douglas or Jovaughn Gwyn would play right guard. Douglas won the preseason competition and started against UNC.

The miserable showing in Charlotte sent USC scurrying back to the chalkboard. After the running game went nowhere and Jake Bentley was hit umpteen times, including on a scramble during the last play that turned into a season-ending injury, something had to change.

For a week, the problem was solved. The Gamecocks kept new quarterback Ryan Hilinski nearly spotless in a 72-10 victory over Charleston Southern. But this week’s opponent, No. 2 Alabama, just may bring a bit more heat.

“We just had a lot of miscommunications. Playing that position, you got to communicate across all five guys and it wasn’t getting done,” Stanley said of the UNC game. “We weren’t playing very disciplined. That was very uncharacteristic of us and we’ve got to be better than that.”

Rhodes received his first significant action and played well, solid progress for a guy the Gamecocks and the rest of the country discovered late in the process.

“Jordan didn’t play (football) until his junior year. We didn’t know anything about him coming off his junior season,” Muschamp said. “Going into his senior year, we were in the Atlanta area, people kept talking about him in the area.”

Rhodes is big (6-4, 330 pounds) and a world away from the freshman that didn’t have two years of strength training and conditioning when he arrived. He helped solidify the front last week, with Stanley anchoring the middle.

It was CSU, not Alabama, but Kevin Harris gives the Gamecocks another running back option

There were hardly any problems against the Buccaneers. Hilinski was protected and the line opened holes for a school-record 493 rushing yards.

But again, it was Charleston Southern. Alabama will be across the line Saturday.

“We’re just trying to figure it out,” Stanley said. “We’re just moving around and putting some guys in positions they’re more comfortable with and that’s the way coach Muschamp and (offensive line coach Eric Wolford) feels, and we’re going to go with the best five guys this week.”

Receiver Randrecous Davis (ankle) is running but not practicing. He’s questionable for the game. Offensive lineman Eric Douglas (foot) should be OK.

Backup running back Deshaun Fenwick (shoulder) will probably be out, as will defensive lineman Brad Johnson (groin).

Defensive lineman Keir Thomas (ankle infection) is out with no timetable for his return.

No. 2 Alabama at South Carolina

Gene Sapakoff column: The 2010 upset of No. 1 Alabama was one of the greatest football wins in South Carolina history, but the 2019 Gamecocks and their fans must adjust to more realistic comparisons

What's the best way to beat Alabama? Gamecocks could learn from Clemson

South Carolina vs. Alabama: Four keys to a Gamecocks upset

South Carolina plays No. 2 Alabama at Williams-Brice Stadium on Saturday at 3:30 p.m.