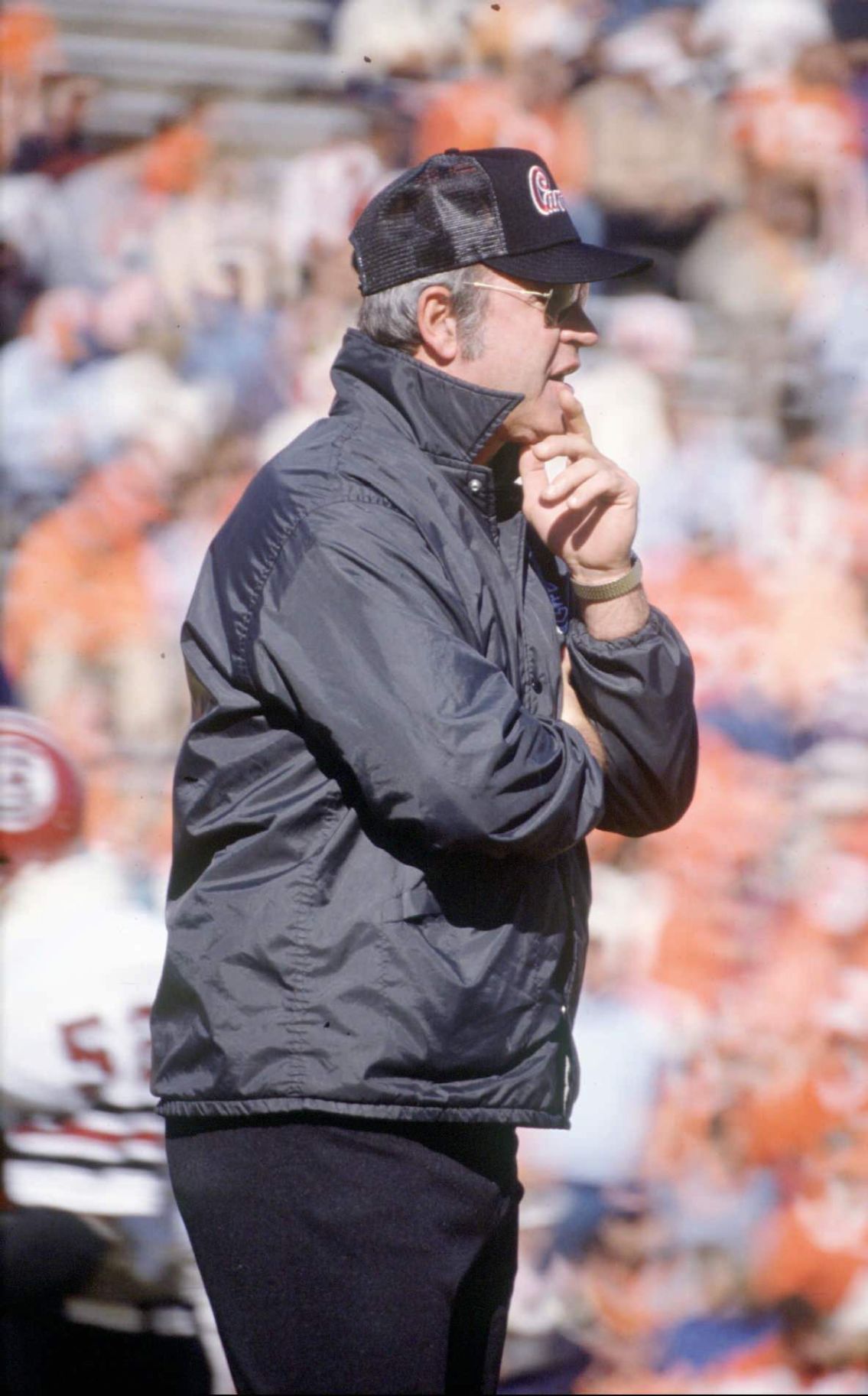 Under head coach Joe Morrison, the 1984 South Carolina football team rose to No. 2 in the Top 25 and was in line to receive an invitation to the Orange Bowl. File/Staff 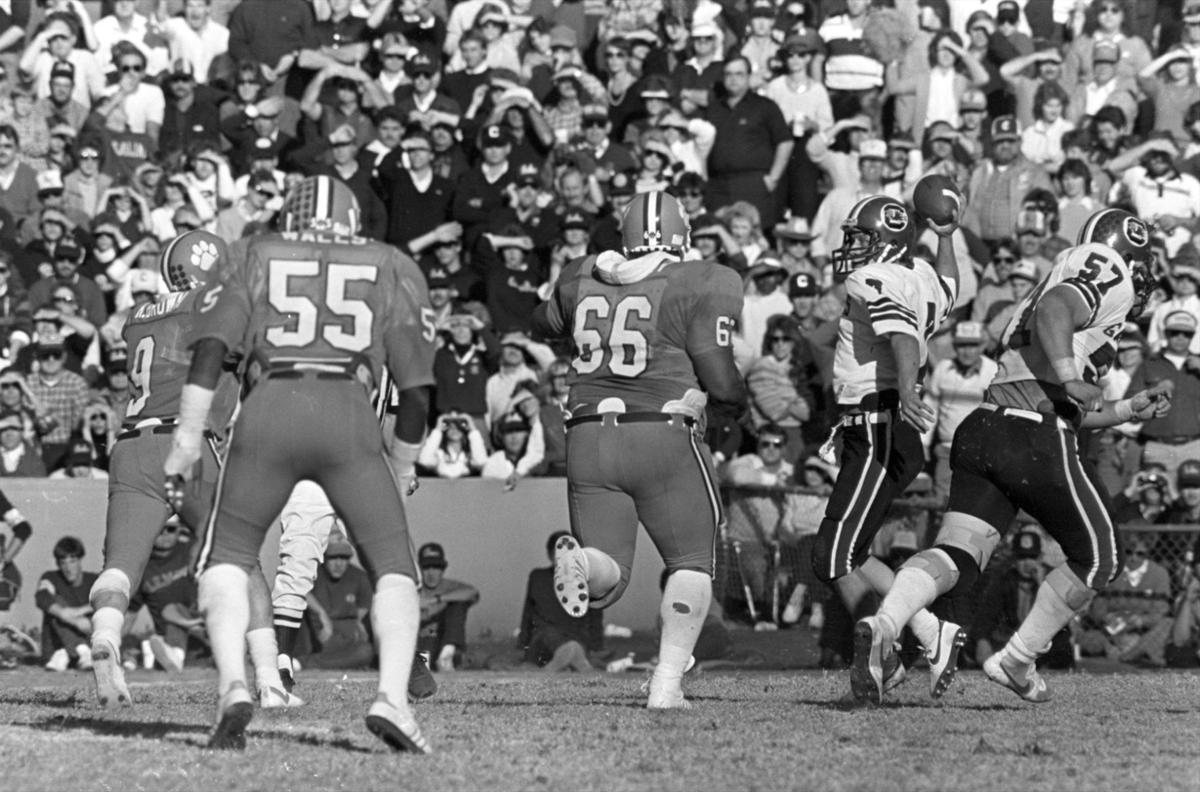 Mike Hold (7) avoids a Clemson sack in the 1984 Gamecocks' last win of the season. File photo. 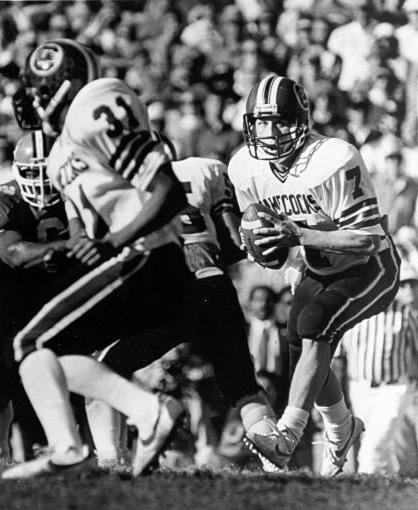 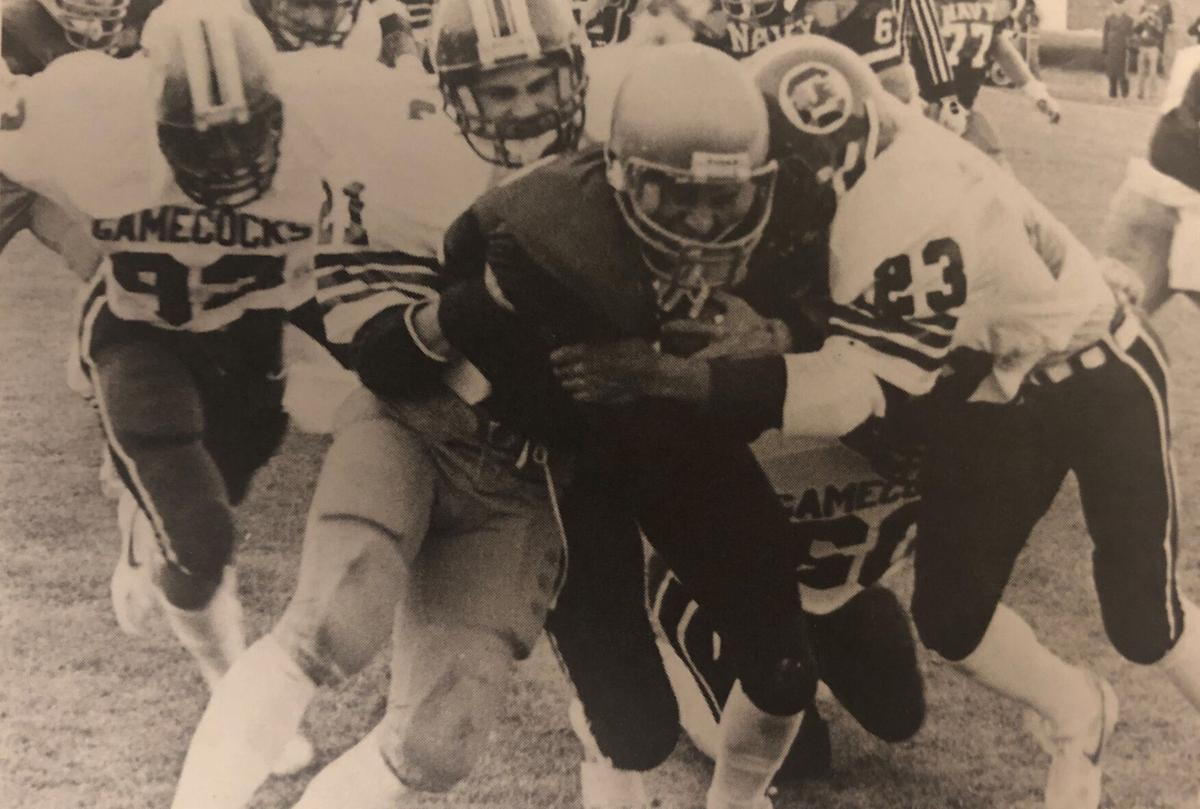 From left, Tony Guyton, Rick Rabune and Joe Brooks couldn't get Navy's ball-carriers to the ground often enough in a 1984 defeat that wrecked their best-ever shot at a national championship. File 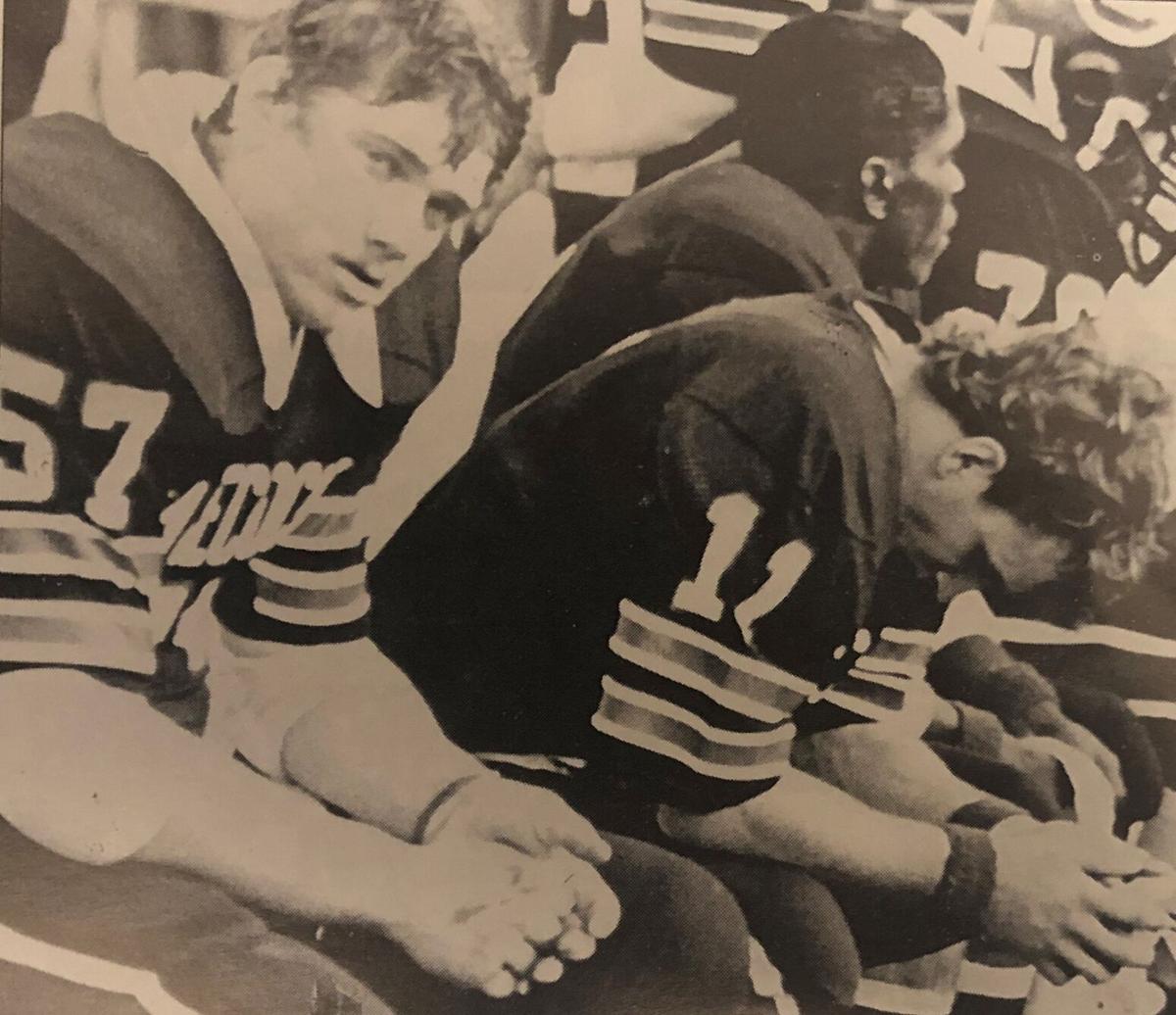 Carl Womble (57), Allen Mitchell and the rest of the 1984 Gamecocks didn't lose often in 1984, but their one regular-season loss to Navy cost them a shot at a national championship. File

Under head coach Joe Morrison, the 1984 South Carolina football team rose to No. 2 in the Top 25 and was in line to receive an invitation to the Orange Bowl. File/Staff

Mike Hold (7) avoids a Clemson sack in the 1984 Gamecocks' last win of the season. File photo.

From left, Tony Guyton, Rick Rabune and Joe Brooks couldn't get Navy's ball-carriers to the ground often enough in a 1984 defeat that wrecked their best-ever shot at a national championship. File

Carl Womble (57), Allen Mitchell and the rest of the 1984 Gamecocks didn't lose often in 1984, but their one regular-season loss to Navy cost them a shot at a national championship. File

COLUMBIA — What if South Carolina had never left the ACC? What if George Felton hadn’t been fired? What if Ray Tanner was still coaching baseball?

With future seasons in question in the midst of an unprecedented pandemic, there has to be some way to fill the time. A popular pursuit is remembering the close calls, turning points and singular moments in history that might have changed everything.

There are many for USC fans to consider, but one sticks out more than all the rest nearly four decades later.

Expectations were anything but high for the 1984 USC football team. Most of the same group of players had gone a mere 5-6 in 1983, coach Joe Morrison’s first season in Columbia.

Yet there the Gamecocks were on Nov. 10, 1984, dancing through oranges thrown on the field by the Williams-Brice Stadium faithful, celebrating a 38-26 win over Florida State that lifted them to the No. 2 ranking in the country with a 9-0 record. The Orange Bowl, where many national championships had been decided, seemed their certain destination.

In his book, “The ’84 Gamecocks: Fire Ants and Black Magic,” late USC sports information director Tom Price wrote that Orange Bowl president Bob Lafferty told Greenville News columnist Dan Foster that USC had to be No. 1 on their list. The Gamecocks would be the highest-ranked team other than Nebraska, who would rise to No. 1 the same day USC shot to No. 2 (after top-ranked Washington lost to Southern Cal).

In those days, the major bowls began marking the teams they wanted to invite before the season was over. So it was considered a throwaway line when Lafferty uttered, “if South Carolina beats Navy next week.”

As the media swarmed during the season, Morrison warned his players not to pay attention, to stay focused. Which is why it was mystifying that he told his team after the Florida State game that it was a done deal — beat Navy, go to the Orange Bowl.

“He did. Yes,” All-American guard Del Wilkes said. “Usually our conversations with coach Morrison were on Sundays following the previous game. It could have been that Sunday after the FSU game, or at the end of practice Monday.”

“I don’t remember exactly but we knew the Orange Bowl could be there, that they would be at the game and we knew if we won, we got an invite,” said Mike Hold, one of two quarterbacks Morrison rotated in 1984. “Did coach Morrison say anything directly to us? Probably not. Did other coaches? I’m sure.”

Navy entered the Nov. 17 game with a 3-5-1 record. Its best player, future NFL running back Napoleon McCallum, was out with a broken leg, and five other starters also missed the game.

The Gamecocks, playing on the road for just the third time that season, forced turnovers on Navy’s first two possessions. USC failed to turn either turnover into points, and it was Navy that scored the first touchdown.

The Gamecocks answered to tie the game at 7, but then came 31 unanswered points. Hold and Allen Mitchell combined to throw four interceptions and Navy whipped USC 38-21 on a clear, cold and windy day.

The warmth of Miami and championship dreams have never felt so far away before or since. Because they were right there to be had.

“I don’t think we looked past them. That being said, knowing that the Orange Bowl is going to be at the game, did we?” Hold recalled. “Eh, maybe.”

If the Gamecocks had beaten Navy, the Orange Bowl bid was theirs. No matter what happened against Clemson on Nov. 24, the Gamecocks would play in Miami in a game with national championship implications.

So following the “What-if” vein …

Do the Gamecocks still beat the Tigers, knowing they didn’t have to win to potentially play for a title?

“Absolutely. We were just a better team,” Wilkes said. “It was a hot November day, and I remember coach Morrison asking (the offensive linemen) how we were at halftime. I remember because when I said yeah, he said, ‘Good, because their fat butts are out of shape and they’re gonna roll over and die like a dog in the fourth quarter.’”

The Gamecocks fell behind 21-3 at Clemson, but battled for a 22-21 victory, finishing the regular season 10-1.

What would have happened if the Gamecocks had beaten Navy and then lost to Clemson?

“The best I can tell you is it would have depended where the rankings were. Losing to Clemson would probably not have done a number on their ranking like losing to Navy did,” said Bob Gillespie, longtime Columbia sportswriter and a chronicler of the 1984 team. “They play Oklahoma in the Orange Bowl still in the top three or four.”

The Gamecocks almost certainly would have been ranked No. 1 after the previous top-ranked team, Nebraska, lost to Oklahoma on Nov. 17. The Orange Bowl had a long relationship with the Big Eight Conference, and when Oklahoma clinched that title the next week, a Gamecocks-Sooners matchup in Miami would have been on tap.

The agreement likely wouldn’t have changed with a loss to Clemson as the Orange Bowl would have been set before the final regular-season games.

As it stood, when Nebraska and USC lost on Nov. 17, undefeated BYU vaulted to No. 1. Oklahoma went to the Orange Bowl as the country's No. 2 team and lost to No. 4 Washington.

BYU was reluctantly voted national champion as the only undefeated major college team in the country, although its schedule was pillow-soft with a mere four wins over teams with winning records, the best over 8-4 Air Force.

The Cougars beat a 6-6 Michigan team in the Holiday Bowl.

If USC beats Navy, Clemson and Oklahoma, the Gamecocks are an easy choice for No. 1 and national champion. How about a USC team that beats Navy, loses to Clemson and then beats Oklahoma?

“Who knows?” Hold said. “I would hope they would consider the strength of the schedule and all that, but probably not. Back then, the record is all you went on and BYU didn’t lose.”

“They beat somewhat of an average Michigan team, so I would have thought beating Oklahoma in spite of losing to Clemson, we would still be No. 1 based on the schedule we played,” Wilkes said. “Yes, I have no doubt that would have still allowed us to be No. 1.”

But does USC beat Oklahoma in the Orange Bowl?

“Yes. That was a special team,” Wilkes said. “We had been together a long time, that group, through three head coaches and several coordinators. I have no doubt in my mind we would have beat them.”

“We played so far above our heads all year. We played Notre Dame, Georgia, Florida State, Clemson, Pitt … we weren’t probably man-to-man as talented, but we had veteran players,” Hold said. “Depth-wise, we probably didn’t match up. Because of our starters and the attitude we played with, I think we could have beat them.”

South Carolina ended up playing No. 9 Oklahoma State in the Gator Bowl. The seventh-ranked Gamecocks lost, 21-14.

The Gamecocks went 5-6 in 1985, and a championship in 1984 probably doesn’t change that. USC returned Hold, Mitchell and most of the running backs that had triggered the veer offense, but lost five starters on the offensive line among 24 seniors on the roster, 15 that started the final game of 1984.

But a championship brings rewards, especially on the recruiting trail. Perhaps the Gamecocks don’t have to reach as much to immediately replace what they lost.

“The windfall in recruiting would have made a big, big difference. Coming off a season that you won a national title, I remember hearing after ’84 that enrollment was actually up at USC,” Wilkes said. “Sit in a young man’s living room and flash that ring, you’re going to get people’s attention that may not have considered you to start with, and it would have affected the school across the board.”

“That ’86 team is the absolute best 'what-if' team ever. They were 3-6-2 but look at who they had. They easily could have been 8-3,” Gillespie said. “Maybe they get better recruits to turn those losses into wins.”

The 1987 and 1988 seasons were each 8-4 affairs with bowl games, but the bombshell landed in October 1988. Tommy Chaikin, a redshirt freshman on the 1984 team, helped write a piece in Sports Illustrated that claimed USC’s football team was awash in steroid use. The Gamecocks, who started 6-0, bottomed out.

There are two avenues besides the one the Gamecocks walked, yet both end at the same point. There’s no getting around that Morrison died in February 1989.

The questions: If the Gamecocks win the title in 1984, does Chaikin still tell his story that caused the scandal? And even if he does, does a championship deflect enough of the scandal off Morrison so that even when he dies, the program is in much better position to handle it?

“If he’s got a championship in his back pocket, win the Gator Bowl in 1987, maybe they’ve got a stronger case to say, ‘We got some bad actors, we’re gonna clean it up,’” Gillespie said. “Look how long Danny Ford rode a bad attitude and fights with the administration after Clemson won a championship in ’81.”

“Had he not died, he probably would have been fired. Had we won, would he have?,” Hold said. “Could he have survived it? Probably. It’s so hard to answer because the steroid thing, I was on those teams, and it wasn’t bad. Did guys do it? Yeah. But every program in the country did, and we were singled out.

“The again, if the scandal doesn’t happen, maybe the pressure doesn’t get to Joe, and maybe he doesn’t have a heart attack.”

But Morrison did die in 1989. Yet if there’s not the cloud over the program, or the belief that there was going to have to be a major change, perhaps the Gamecocks get through that season with an interim coach and make a splash hire the next season.

“That’s the best chance they’ve ever had. Flip Navy and Clemson and get them to 10-0, they get that Orange Bowl bid, they’re right there,” Gillespie said. “That Navy loss just crushed ’em.”

All that remains is memories and speculation about what might have been, even all these years later.