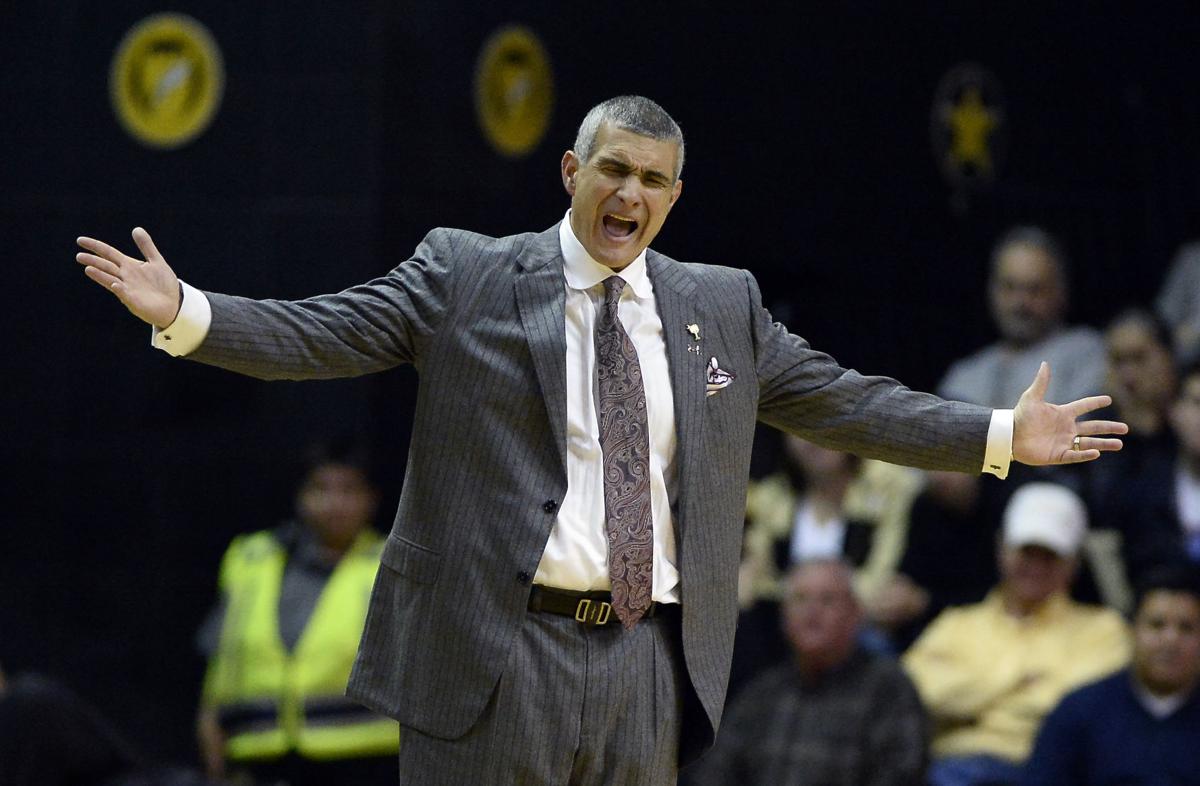 Frank Martin is third on South Carolina's career wins list with 147 in eight seasons as the men's basketball coach. File/AP 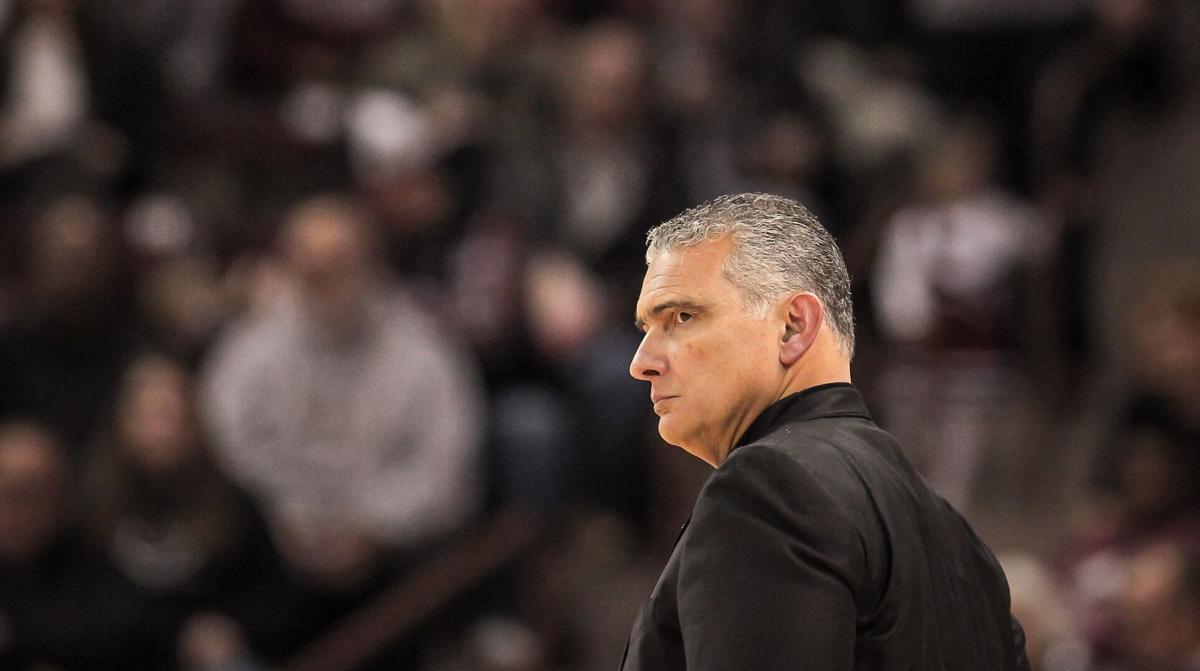 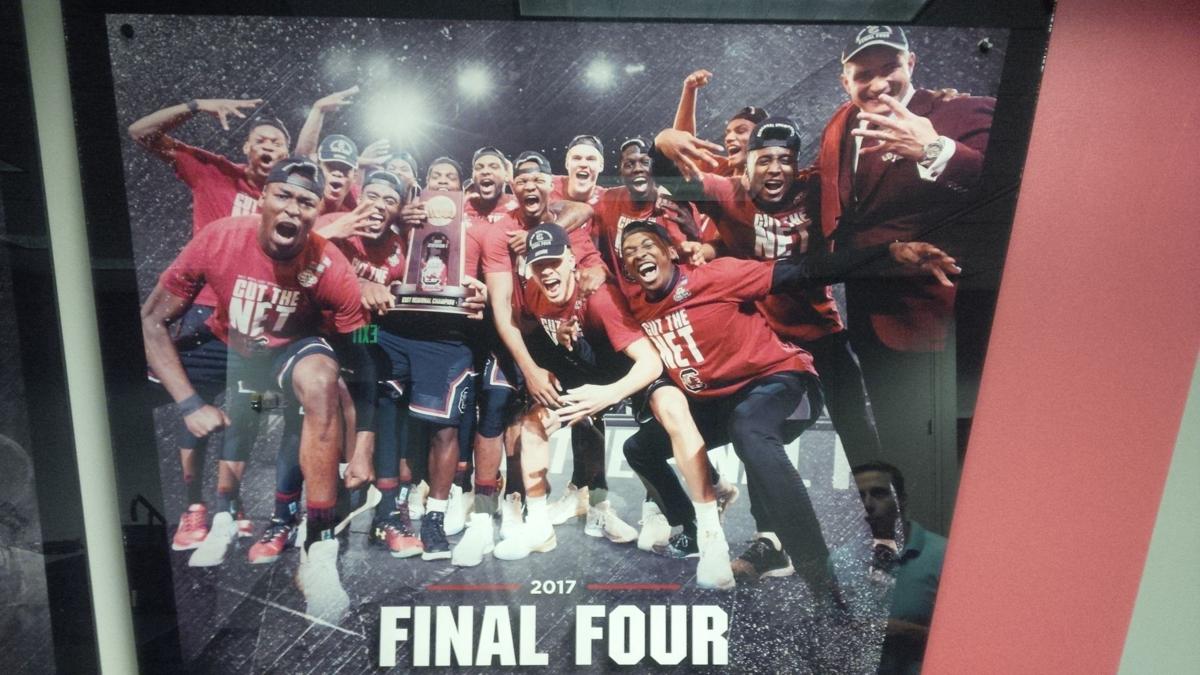 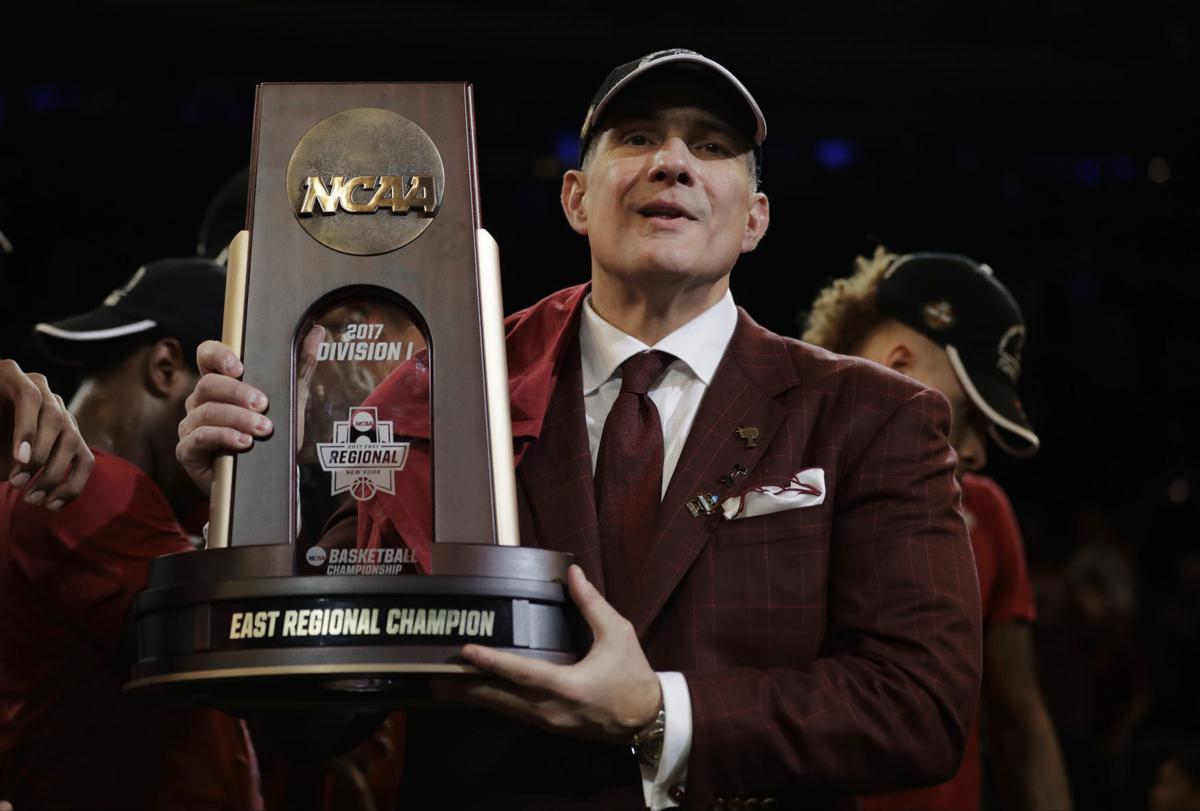 Frank Martin has only reached one NCAA Tournament in eight years at USC, but he took the Gamecocks further than they'd ever been. File/AP 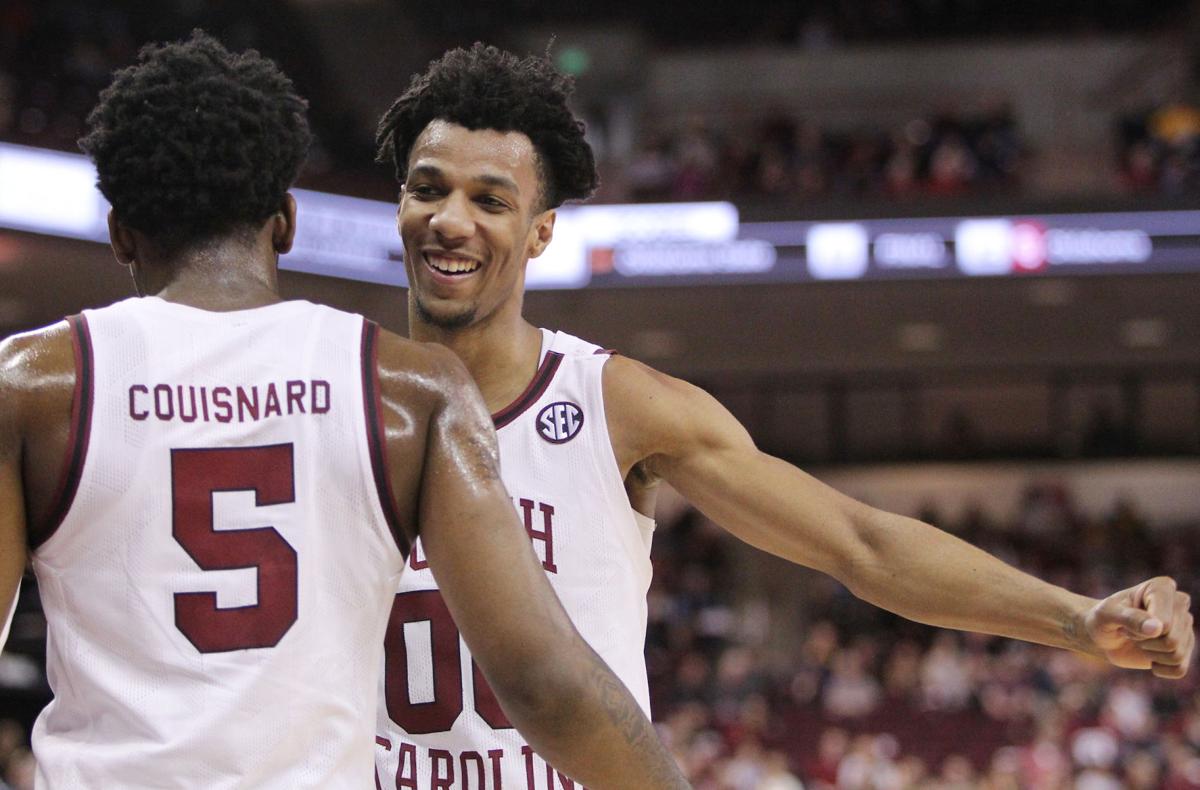 Guards A.J. Lawson (right) and Jermaine Couisnard were the Gamecocks' top two scorers last year and are back this year. File/Travis Bell/Sideline Carolina

Frank Martin is third on South Carolina's career wins list with 147 in eight seasons as the men's basketball coach. File/AP

147: Martin’s wins at South Carolina, the third-most in program history.

4: Winning SEC seasons in eight years. The Gamecocks had three in 21 years before Martin.

3: Top-four finishes in the SEC, all in the last five years. USC had four in the previous 24.

1: Final Four appearance, the only one in the history of Palmetto State basketball.

By those numbers, Martin is the most successful USC coach since the legendary Frank McGuire. But Martin understands, only too well, those other numbers.

“No, it’s not frustrating to hear fans complain about that,” he said on the eve of his ninth season in Columbia. “At the end of the day, I’m frustrated by that, too.”

To some, the triumph outweighs the regularity. Martin’s Gamecocks have only gone to one NCAA Tournament, but what a tournament it was.

In his first and only try, Martin took USC, a program with nine NCAA tournament appearances and that had not won a tournament game in 44 years, to the 2017 Final Four. He also tied McGuire as the Gamecocks' all-time winningest coach in the NCAA Tournament, and really passed him considering two of McGuire’s four wins were consolation games.

That Final Four appearance, which challenges as the top athletic moment in school history considering how unique and unexpected it was, would seem to be the only argument to make about whether or not Martin has been successful.

Yet the Gamecocks haven’t sniffed the NCAA Tournament since, leaving some to grouse about consistency.

Martin has won. Yet Power-5 coaches are judged on getting to the tournament, and he’s been to one in eight years.

His team this year, he says, has the most talent since that Final Four season. If he gets to the tournament this year, the questions and complaints will disappear.

Martin inherited such a mess when he arrived for the 2012-13 season that it was going to take multiple seasons just to be decent. It’s doubtful that even the most passionate fan would have expected an NCAA Tournament berth over his first three years.

The fourth was a team worthy of an NCAA Tournament bid was left out. There was much said about strength of schedule and a 1-3 record to finish the regular season.

There was also the fact that it was the first time since 2002 that a major-conference team with at least 24 wins was left out of the NCAA Tournament.

It has always seemed like the Gamecocks stop getting talked about the first time they stub their toe during the season, and that year was another example. USC began 15-0, but the national media hardly noticed until the 16th game, a loss at Alabama.

After that it was “see, they’re not that good” and “that schedule was tissue-soft.” Going 15-0 against anybody in this age of staggering parity across the sport is notable, yet USC was treated like a pesky kid brother.

Martin's fifth season was the Final Four year, and while that team lost 75 percent of its scoring and probably shouldn’t have been expected to make the NCAA Tournament in Year 6, many fans voiced their displeasure that the Final Four run wasn’t paying dividends, such as in recruiting. Years 6 through 8 were marred by devastating injuries and glaring non-conference losses that rubbed the shine off strong SEC seasons.

“Last year, we’re right there. We were going to the postseason, it was just what tournament,” Martin said. “We lost, obviously, against Stetson and didn’t play well at all in the Mexico tournament. We put ourselves in a spot where we had to win at the end of the year, but we were still 18-13 with some big-time wins.”

As it turned out, the pandemic canceled all postseason tournaments. USC was still alive for a run through the SEC Tournament and a chance at the NCAAs, but if not, an NIT berth seemed assured.

The NIT after two years of nothing following a Final Four, at a school that has had plenty of success in the NIT, wouldn’t move the needle. It’s why this year’s team, with so much veteran talent, almost needs to make the tournament just to show that the program has moved forward.

“We’re going to have fun this year, because we all know what we’re doing, we all gel together with real good chemistry,” star guard A.J. Lawson said. “This year’s going to be good.”

Recruiting was never going to immediately pay off after the Final Four. The next season’s class had already signed the previous November.

“It’s my fault, but even though it’s my fault, I don’t ever want anyone to speak negatively about a player of a group of players. We had injuries and I made recruiting mistakes leading into the Final Four,” Martin said. “We had the BB gun incident. Then we got to scramble and fill scholarships in the spring for that following year.”

Five players were suspended for the Gamecocks’ 2016 NIT games after being charged with various crimes related to a high-powered BB gun. Three didn’t finish their careers at USC while a fourth took a medical disqualification.

All told, 10 players from the 2015-16 team that should have gone to the NCAA Tournament weren’t on the 2016-17 team that went to the Final Four. But hey, it was a Final Four team, so the defections didn’t hurt that bad, right?

Yes, for that year. Then all the seniors on that team were gone, and all of the players who were being groomed to take their places had already left.

“That doesn’t mean we recruited bad kids, but we recruited people who didn’t fit who we are. Now you have a young man who makes a mistake, in (dismissed guard Rakym Felder),” Martin said. “I tried to cover myself for losing (current Denver Nugget P.J. Dozier). We took extra guards on purpose if he left, and he did, but all that didn’t work out.

“We got really young again. We took two grad transfers after that. Then you lose them, so you get young again. It’s a combination of all those things.”

This year’s roster lost three from last year and added one. The other 12 all played last season.

Martin remembers the roar from the State Farm Stadium crowd in 2017, after the Gamecocks, in less than five minutes of game clock, turned a 14-point deficit against Gonzaga into a two-point lead. There were over 70,000 people in that arena but Martin said he was floored by the sound from Gamecock fans who had traveled there for the Final Four.

A month later, Martin was in a Target store in Columbia and ran into a couple of fans. The younger one pointed to his father and said, “Dad! That’s Frank Martin! He’s our coach!”

The father asked Martin if he coached football.

Martin said no, he coached basketball.

The father said, “I sure hope you figure it out because we’ve been waiting for a long time for our basketball team to be halfway decent.”

“That was a month after the Final Four,” Martin said. “I use that story not to dwell on negativity, but it’s the lack of relevance for so long.”

Martin has groused about attendance before and in the age of social media, has quickly been rebutted with “Stop losing.” Attendance at Colonial Life Arena has drastically increased during his tenure but for a man who was used to sold-out crowds every night at Kansas State, being able to hear himself in a cavernous 18,000-seat stadium was unsettling.

It’s not lack of fans that caused some of the defeats that glared over the last three seasons, losses that strung with USC’s lack of historical weight may have made it difficult to earn NCAA Tournament consideration even if the Gamecocks had the records to challenge for it.

Yet it would be pleasant if fans would discuss how much it took to get to the point of challenging for it, and what the Gamecocks did in that lone appearance, instead of only criticizing the failures.

Lawson and Jermaine Couisnard earned preseason All-SEC honors. Losing Maik Kotsar to graduation was tough but the Gamecocks return explosive forward Keyshawn Bryant and added Seventh Woods, who was on the roster last year while sitting out a transfer season but played three years at North Carolina before that.

There’s talent and experience on the roster, and enough “big” games on the schedule that if the Gamecocks win some of them, the NCAA Tournament selection committee will notice. USC gets one right out of the gate, playing Liberty on Saturday in Kansas City.

“We got a chance because our guard play is really good. It’s the best offensive guard team that I’ve had since I’ve been here,” Martin said. “Our big guys need to keep growing and I think they will. We got depth and offensive firepower.”

He’s never made predictions about this being a tournament team, but he likes this group and is finally out of that recruiting hole. The past three seasons have featured some strong wins, but also a harsh early-season defeat and numerous injuries.

Saturday starts the season, and the countdown to March. The only question that matters will be answered on March 14, Selection Sunday.

Will the Gamecocks be picked, cementing Martin as the greatest USC coach since McGuire?

Or will the program’s greatest moment get further and further away?