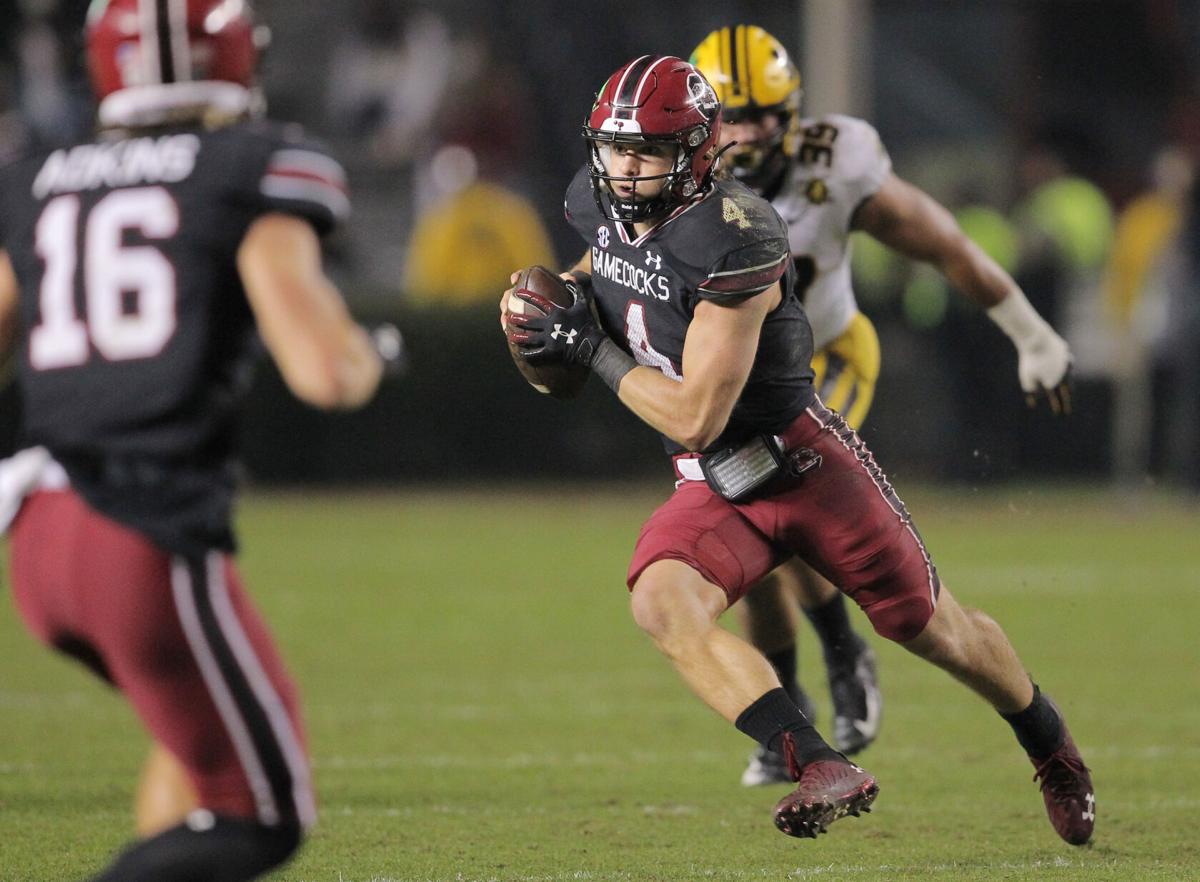 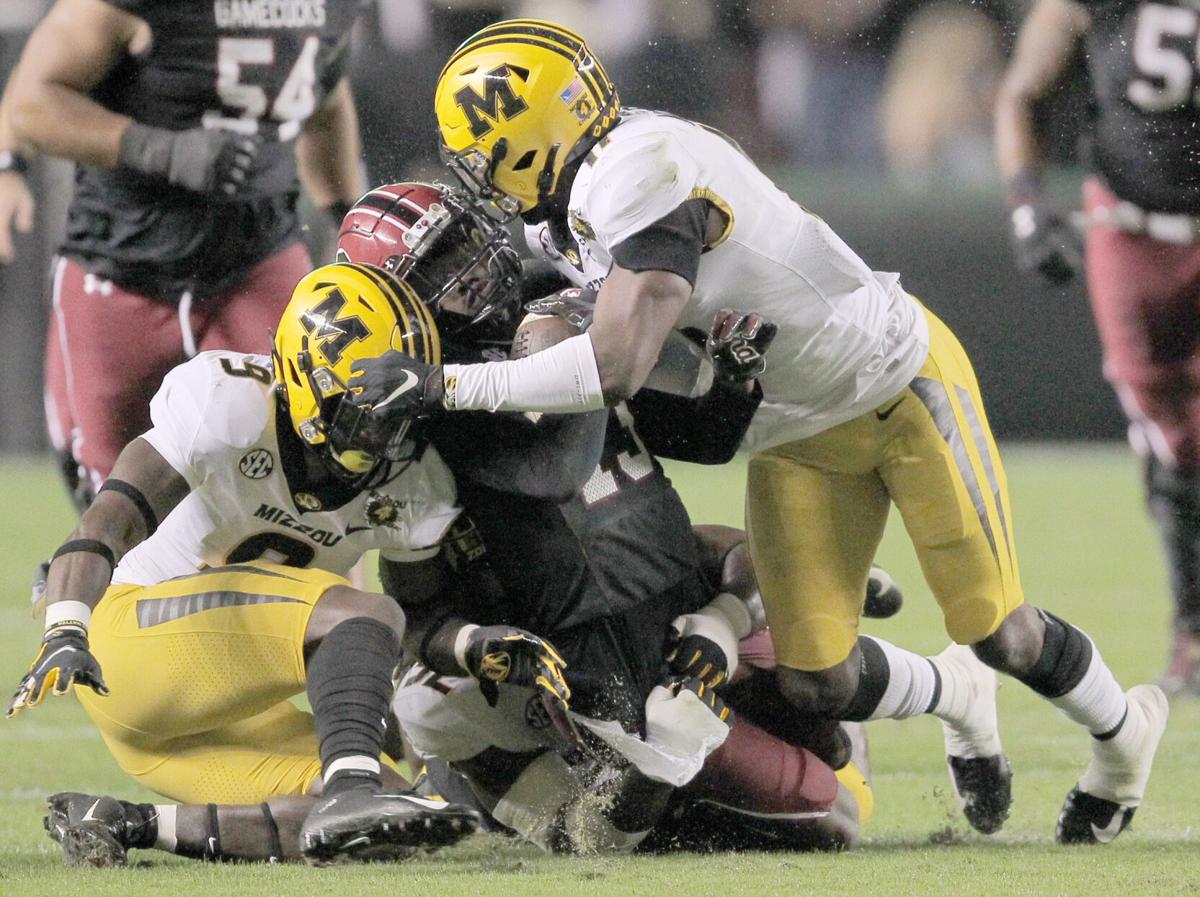 Shi Smith was knocked out of Saturday's game less than three minutes into it. Travis Bell/SIDELINE CAROLINA

Shi Smith was knocked out of Saturday's game less than three minutes into it. Travis Bell/SIDELINE CAROLINA

South Carolina made a long-awaited quarterback change on Saturday, but the emergence of freshman Luke Doty fell just short of lifting the Gamecocks past Missouri. USC lost 17-10 after trailing 17-0 at halftime, a second-half comeback denied when Doty was intercepted by Devin Nicholson with just under a minute to play.

The Tigers (3-3) rolled to their lead against a Gamecocks squad that couldn’t move the ball or stop Missouri from doing the same, and while Doty replaced struggling starter Collin Hill to start the second half, he couldn’t patch all of the many holes in USC’s ragged roster.

“It’s a bottom-line business and we didn’t get the W tonight,” interim head coach Mike Bobo said. “I want to say one thing — I’m proud of that team out there tonight. There was no quit.”

Doty completed 14 of 23 passes for 130 yards and an interception, while leading the team with 59 rushing yards on 11 carries. Under his direction, the Gamecocks had 215 yards of offense after a mere 68 in the first.

Bobo dropped his first game in relief of the fired Will Muschamp and the Gamecocks (2-6) dropped their last chance at a .500 season. USC wasn’t expected to win, especially after losing ace receiver Shi Smith to injury less than three minutes into the game, and while Doty moved the ball, he couldn’t get the Gamecocks in position for enough points.

Smith was alert in the locker room after the game, Bobo said, but it was too soon to tell what his prognosis is for next week.

As for Doty potentially starting next week, Bobo said he’d have to evaluate his performance Saturday and look at the next defense, but Doty certainly didn’t hurt his chances.

It wound up being another question for Bobo to consider as he prepares for his likely final two games as USC’s head coach. Go back to Hill, who he stuck with despite having no ability to escape a blitz and consistently overthrowing or underthrowing his receivers? Or get behind Doty, who did well but also spawned the question, “If that’s what he could do, why didn’t he play sooner?”

There were hardly any growing pains for Doty, who ran out of blitzes, completed most of his passes and generally gave a reason to hope. He also won hearts by absorbing several hard hits and popping back up.

The defense had a severe adjustment in the second half, keeping Missouri off the scoreboard. The Tigers punted on every second-half possession until the final interception.

“Around the third quarter, it was like, ‘OK, we don’t have our coach but we still got to go out there and show out for him,’” linebacker Ernest Jones said. “We’ll be a little bit more focused coming into the week than we were this past week with everything going on.”

The crowd showed up, and didn’t boo, except when the scoreboard listed Gamecocks in the NFL and many voiced their displeasure at certain players who criticized USC’s fanbase this week.

Mitch Jeter had two touchbacks among his three kickoffs, and Missouri had zero return yards. Touchbacks have been a problem for the freshman this year.

Once Smith went down, the Gamecocks’ offense went with him. The Tigers loaded the box and waited for running back Kevin Harris to come to them, and mixed blitzes in on Hill. Harris, who came into the game with an outside shot of breaking 1,000 rushing yards for the season, mustered 58.

As he’s been all season, Hill was knocked out of rhythm by the pressure and when he did avoid it, his other enemy showed up. USC had two more crucial dropped passes.

The defense was sublime in the second half but the numerous busts in the first dug too deep of a hole.

Doty was authoring his own Connor Shaw comeback story over Mizzou until the pick.