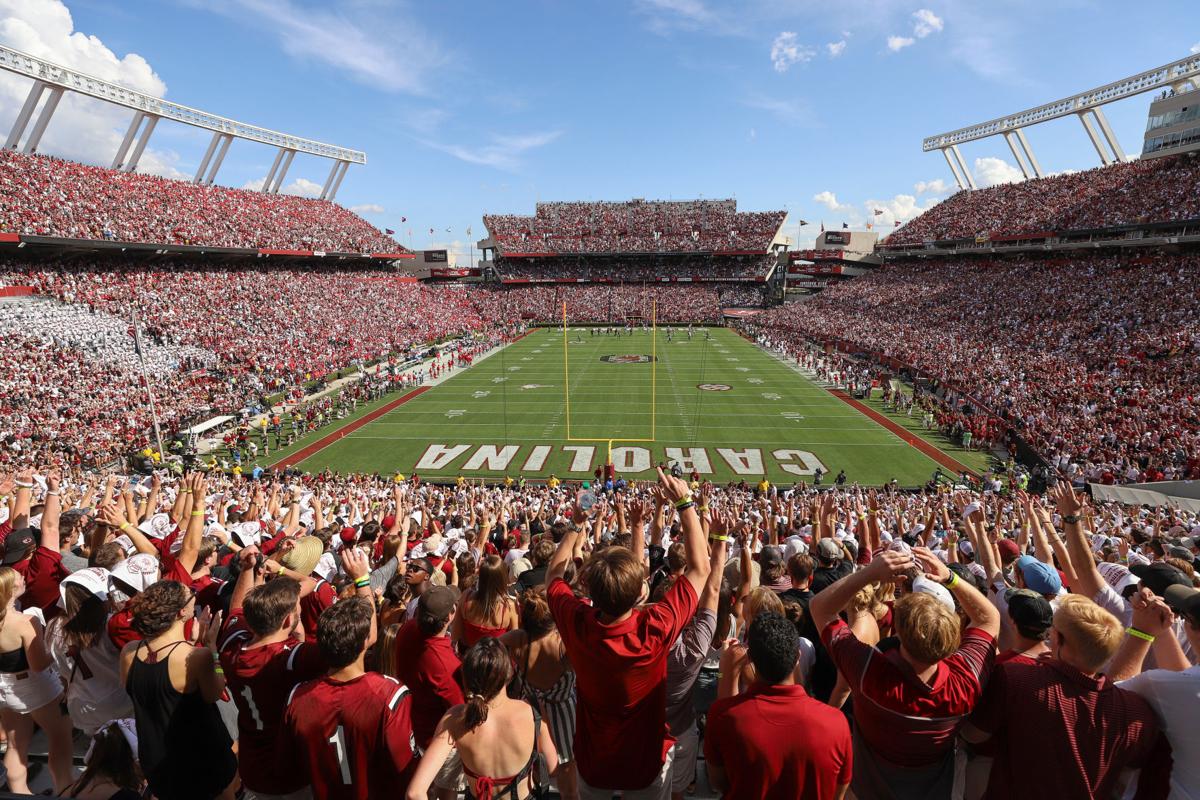 South Carolina's Williams-Brice Stadium was able to pack in more than 80,000 fans for football games last season, but that number could be limited to less than 15,000 per game this year because of the coronavirus pandemic. File/Travis Bell/Sideline Carolina 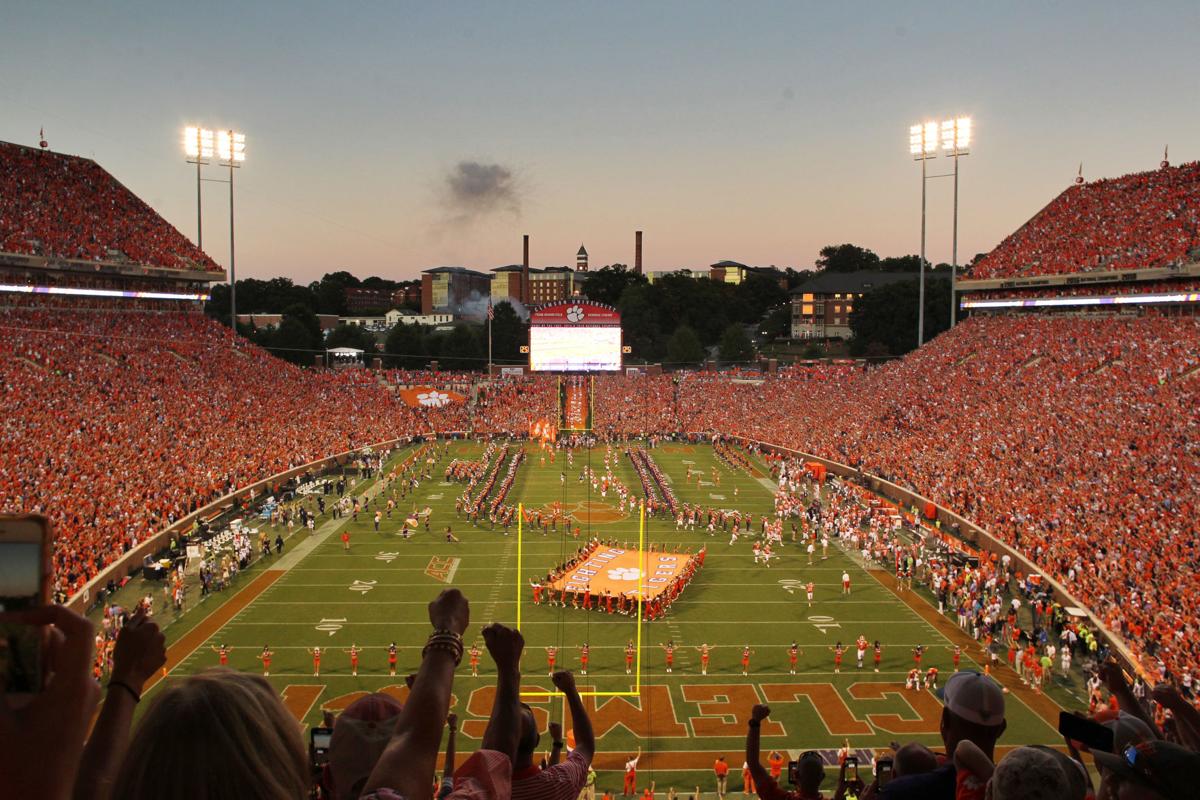 Crowds like this one for Clemson football games will likely not happen this season because of the coronavirus pandemic. Travis Bell/Sideline Carolina

COLUMBIA — Ryan Hilinski takes the snap, spies Shi Smith racing past the Coastal Carolina secondary and drops a perfect pass into his hands. The Williams-Brice Stadium crowd roars its approval as South Carolina opens its season on Sept. 5 with a touchdown.

If the roar is more of a loud shout, and fans have to walk to the next section over to high-five their buddies, well, that’s just what will have to be done.

“This was not in the playbook,” USC athletics director Ray Tanner said last week. “We’re trying to figure out the best way to handle it.”

Tanner and his staff have been doing what every college athletics department has been doing since the coronavirus outbreak scuttled spring sports and cast the fall football season into a deeper hole than fourth-and-45. While South Carolina and Clemson have each announced their plans to have a normal fall semester from a university perspective, the athletics components are still in doubt.

Questions and more questions have no definite answers. All USC and Clemson can do is continue to run models about how things could look once the season arrives.

“I’m comfortable saying that regardless of what direction we move, we’re going to take a significant hit financially,” Tanner said. “It’s not going to be a situation where we’re trying to open the gates because of financial reasons. The financial pressures are real, and I can’t tell you a program around the country that’s not going to experience a decline in revenue.”

“Each school and their governing boards and how they look at things are a little bit different. But for the most part it's we do want to get back to business as usual,” Clemson athletics director Dan Radakovich said. “We do want to have a campus that has students on it, has student-athletes, has activities and specifically athletic activities. But we have to understand, given where you are in the country, how safe is that?”

Williams-Brice Stadium is currently undergoing a $22.5 million facelift, upgrading several seating areas and adding club and lounge space. The additions will drop the stadium’s capacity to slightly under 80,000 (it was 80,250) but under proposed social-distancing models, the stadium won’t be nearly full.

Tanner said that an estimate of 30,000 fans would be “way high” and the number would probably be half of that. How that works with six feet of distance between fans, or how the students will be seated, or if there will be a lottery system deciding who gets to go to which game is yet to be determined.

There is no answer that will please everyone, especially when season-ticket sales are inching toward 50,000. And while there may be an answer about how to sit in a safe social-distancing seat and watch the game, how does a fan get to the seat when gates and stadium ramps are clogged with people?

Clemson will have that problem in spades. With another terrific team expected and coming off two national championships in four years, Clemson’s fan base may be willing to take risks that USC fans won’t when cramming into Memorial Stadium.

“I've had conversations with members of our board, where the customer, they're always king,” Radakovich said. “In almost all circumstances it's really important to make sure you're getting down and understanding who your customer is and how long they've been with you and the fact that they've been loyal a long time, and maybe there's a circumstance that prohibits them from being a part of your season this year in whatever sport, but certainly football.

"How do you treat that? It's treated differently now than maybe it would've been a year ago, for great reason.”

There is a greater emphasis on football at most colleges because it pays for nearly every other sport on campus. Without it, or without the full benefit of it, other sports and student-athletes suffer.

Neither USC nor Clemson have garnished employee salaries or cut other sports, but those discussions have to be had. As head of one of the rare departments across the country that operate at a profit, Tanner completed the last fiscal year on budget.

Next year? It's very hard to project where it will land.

“We’ve already made significant cuts for our 2020-21 budget as we move forward. There will be more to come,” Tanner said. “In the time that we’re going through, everything has to be discussed and considered. Is (cutting sports) something I want to do? Absolutely not.

Said Radakovich: “Where is that line drawn as to how we can do that in a way that keeps us socially distant or keeps us in a protected manner but allows us to have the activities we all certainly desire?

“... the ability to play college football is really important for the athletic department, the athletic program, and then as an extension of the institutions as well. So I think waiting until the last possible moment, that could happen, hopefully we get some better news and we don't have to be down to the last minute but certainly prepared to do that.”

USC and Clemson have prepared as best they can for a situation that changes daily. All that’s left is to keep waiting, and hoping, that an all-clear is sounded, and the situation stays that way throughout the fall.

Gamecocks struggling to stay in shape: Only 30 percent of players have access to weights