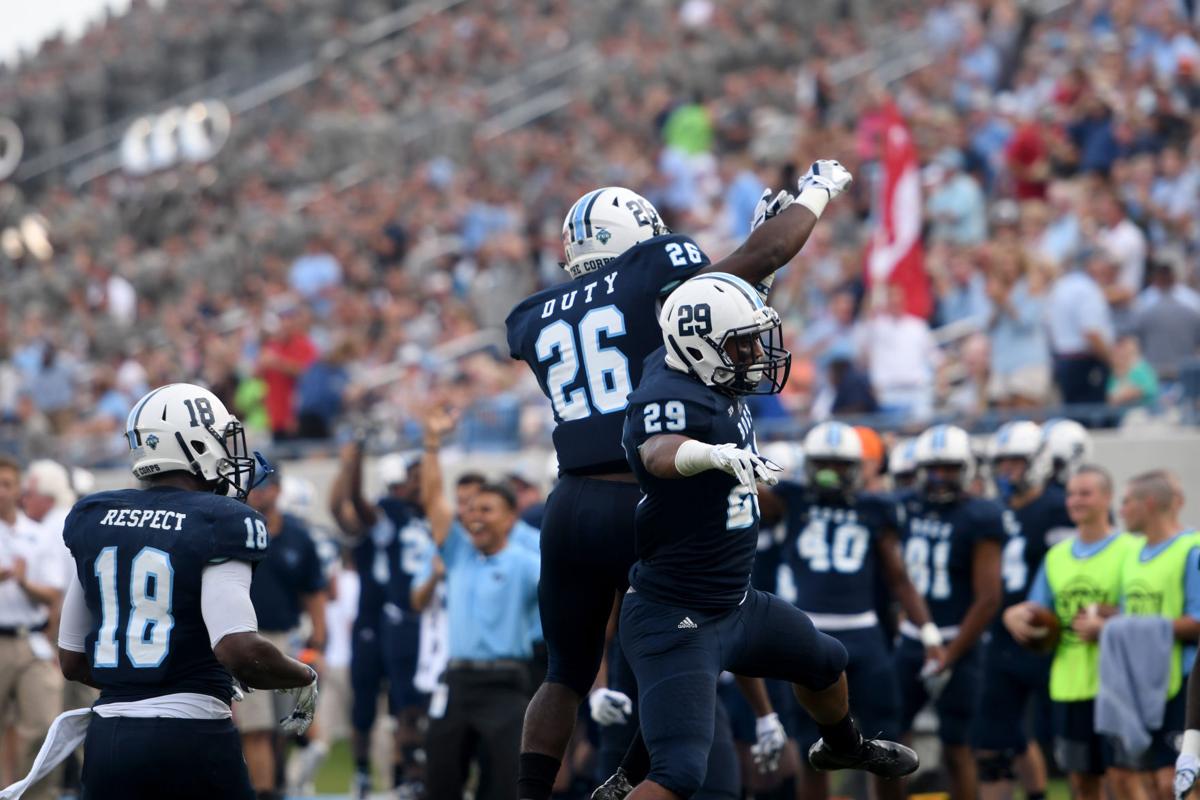 The Citadel players celebrate during a 31-14 win over Newberry on Sept. 2, 2017. (Michael Wiser/Special to The Post and Courier) 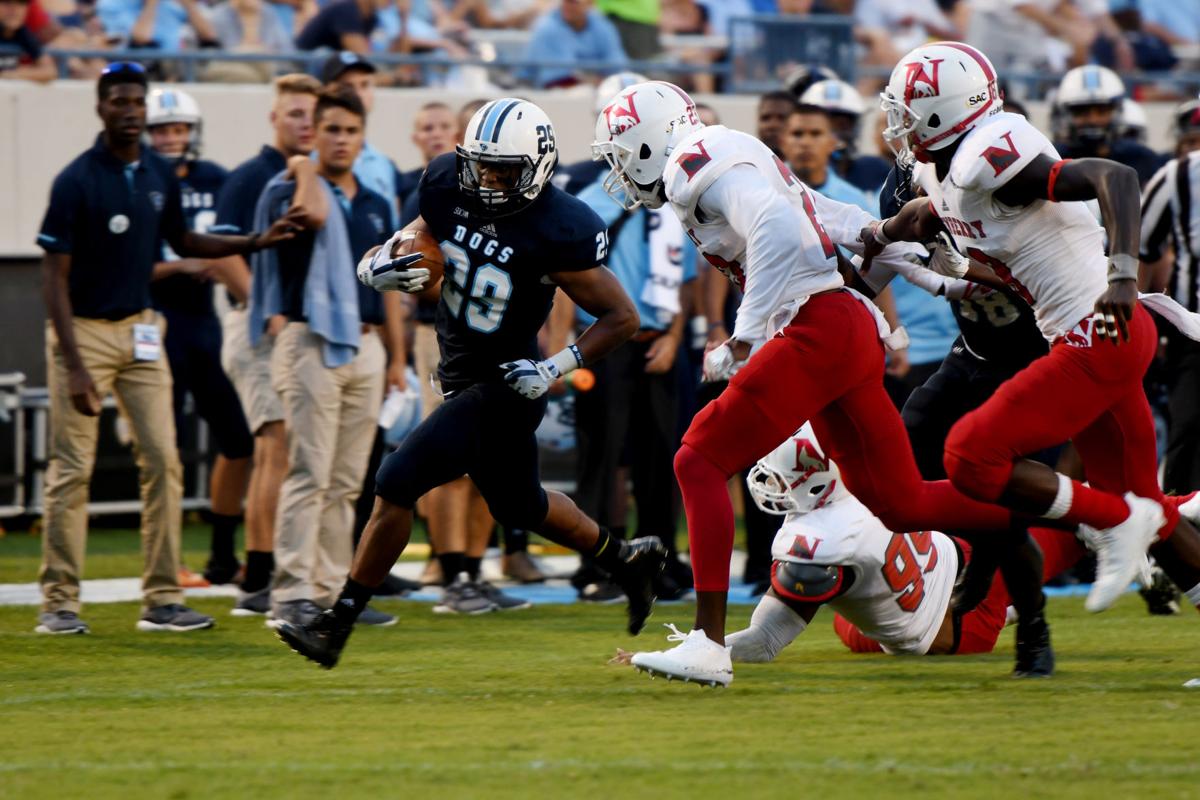 The Citadel's Grant Drakeford breaks away for a big gain in the Bulldogs' season-opening victory over Newberry at Johnson Hagood Stadium on Saturday. (Michael Wiser/Special to The Post and Courier)

The Citadel players celebrate during a 31-14 win over Newberry on Sept. 2, 2017. (Michael Wiser/Special to The Post and Courier)

The Citadel's Grant Drakeford breaks away for a big gain in the Bulldogs' season-opening victory over Newberry at Johnson Hagood Stadium on Saturday. (Michael Wiser/Special to The Post and Courier)

Quarterback Dominique Allen may have started dancing in celebration even before Cam Jackson hit the end zone.

Jackson's 74-yard touchdown jaunt on an option pitch from Allen broke open a close game in the third quarter, propelling The Citadel to a 31-14 win over Division II Newberry before 7,467 fans in the Bulldogs' season opener at Johnson Hagood Stadium.

“As soon as Cam gets green grass, nobody is catching that kid,” Allen said of the decisive TD. “Once he hits the sideline it's automatic, so I knew he was gone.”

Citadel fans in the stadium's new beer tent toasted Jackson's 110 yards on just nine carries and a 1-0 start for the Bulldogs, who are seeking a third straight Southern Conference championship.

“We rely a lot on our fourth and fifth-year players, and that was the spot in the game where we broke it open a little bit,” said Citadel coach Brent Thompson, who is 11-2 in his second season at The Citadel. “Newberry is a very good football team, and they fought us tooth and nail until the end.”

Allen, the senior QB, went for 91 yards on 16 carries, while slotback Grant Drakeford had 65 yards and a TD on nine carries. New fullback Brandon Rainey, a converted QB, ran for 54 yards on 15 carries.

Backup QB Jordan Black engineered two scoring drives, scoring on a one-yard run in the second quarter and throwing a six-yard TD pass to Josh LeBlanc to seal the deal at 28-7 with 7:22 left to play.

Black hit two of his three passes for 43 yards, while Allen was 4-of-10 for 37 yards with an interception.

“We're probably a C- right now,” Thompson said when asked to grade his offense. “We did enough to win the game. I thought we had good rushing yards and decent passing yards, but we can always improve on that. The good news is that we didn't blow a whole lot of assignments and didn't have a lot of penalties.”

Newberry (0-1), which won 10 games and made the D-II playoffs last year, hung within 14-7 of the heavily favored Bulldogs as the third quarter wound down.

"I don't think anyone outside our locker room thought it would be this close," Newberry coach Todd Knight said. "This was a really good team we played, and they're not ranked No. 12 in the nation for nothing. So there's no shame in it."

But on first down from his own 25, Allen moved to his left, drew a defender in and pitched to Jackson, who burst through a gap and streaked down the sideline for the 75-yard score, pushing him past the 2,000-yard mark for his career.

The longest run of Jackson's career put The Citadel ahead by 21-7 with 37 seconds left in the third quarter.

“We had been slowly trying to grind it out on offense,” Jackson said. “The defense had been getting us the ball plenty of times, but we needed to make something happen. I felt like I was just hunting and pecking for a gap instead of just hitting it. I finally just hit it.

“Raleigh Webb had a great block on the outside and I just took off. Their outside linebackers had been skating out to make sure we didn't pitch it. Dom kind of took it inside and then pitched it, and there was nothing but grass.”

The Citadel took a 7-0 lead midway through the first quarter as slotback Drakeford showed some burst of his own on a 29-yard touchdown scamper. That capped a 12-play, 75-yard drive that took 5:17 off the clock.

The Bulldogs seemed primed to take control when they drove 42 yards to the Newberry 4, with Allen twice breaking off 17-yard runs. But Drakeford was stopped short on fourth-and-2 at the Wolves' 2-yard line.

“I would certainly liked to have gotten that one, or at least kick the field goal,” Thompson said. “But if we're going to play on the edge, that's the way we need to play.”

Thompson challenged the officials' spot in the first use of instant-replay at Johnson Hagood Stadium, but lost the challenge, thwarting the Bulldogs' drive.

Newberry tied it at 7-7 after Allen, apparently not seeing Wolves linebacker Will Elm, threw a pass straight at him. Elm made a leaping interception and raced to the Bulldogs' 9.

On third-and-goal from the 9, Citadel cornerback Ben Roberts was called for pass interference even as Wolves quarterback Nick Jones sailed his pass far out of bounds. Darius Clark, a St. John's High School product with a huge throng of friends and family in the stands, scored from three yards out to knot the score at 7-7 with 10:30 left in the half.

Backup QB Black came on for The Citadel after Allen took a hard shot and drove the Bulldogs 45 yards for a TD. Black scored on a one-yard plunge for a 14-7 lead with 1:28 left in the half.

Newberry at The Citadel