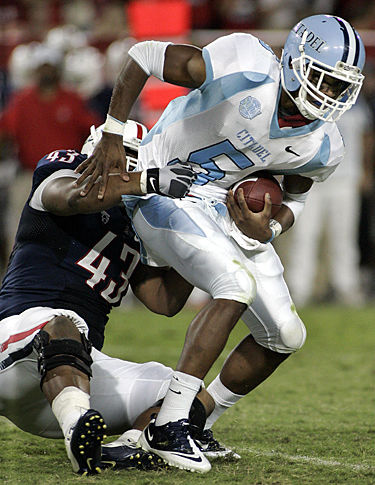 Arizona wrapped up Citadel quarterback Matt Thompson and the Bulldogs on Saturday night.

Arizona wrapped up Citadel quarterback Matt Thompson and the Bulldogs on Saturday night.

The outcome of The Citadel's 52-6 loss to Arizona on Saturday night was decided early. But the most important developments, from a Bulldogs perspective, came late in the game at Arizona Stadium.

Freshman Ben Dupree, who started The Citadel's season opener at quarterback, made his first appearance at running back. Redshirt freshman QB Sam Martin relieved starter Matt Thompson in the second half and acquitted himself fairly well, perhaps thrusting his name into competition for the starting job.

And senior kicker Sam Keeler, searching for confidence after a tough 2009 season, made good on field goals of 39 and 23 yards in front of a crowd of 54,814 in Tucson, Ariz.

Other Citadel bright spots were harder to find. Arizona QB Nick Foles passed for 214 yards and running back Nic Grigsby rushed for 107 yards and three touchdowns as the Wildcats improved to 2-0 and climbed into The Associated Press poll at No. 24.

"Hopefully, playing a team as well-coached as Arizona is will help us the rest of the season," Bulldogs coach Kevin Higgins said. "Obviously we didn't play as well as we would have liked to."

The Citadel's charter flight returned to Charleston at about 7 a.m. Sunday, and the Bulldogs immediately turned their attention to their next foe, 0-2 Presbyterian, which lost 58-21 at Clemson on Saturday.

Thompson, who came off the bench to pass for three TDs and run for another score in the Bulldogs' season-opening 56-14 win over Division II Chowan, made his first start at Arizona and found the going much tougher.

The freshman hit just 2 of 7 passes for 12 yards and was sacked three times to net minus 9 yards rushing on nine attempts. He also lost two fumbles, both of them leading to Arizona touchdowns.

Martin, facing backup defenders with the game decided, came on in the third quarter and ran 11 times for 31 yards, sparking both of the Bulldogs' scoring drives, of 48 and 47 yards. He completed just 1 of 7 passes for nine yards, but had at least two passes dropped.

Fullback Terrell Dallas, who led The Citadel with 54 yards on 10 carries, popped a 30-yard run on the drive that ended with Keeler's first field goal at 6:55 of the third quarter. Dupree, making the move to slotback in the triple option, carried once in the fourth quarter for six yards.

On defense, the Bulldogs held up fairly well until getting gashed for scoring runs of 62, 23 and 3 yards in the third quarter, the 62-yarder coming from Grigsby.

The Citadel was hanging close and trailed 14-0 late in the first half when the Bulldogs' first real mistake helped Arizona break it open.

The Wildcats had taken a 17-0 lead on Alex Zendejas' 40-yard field goal when Thompson fumbled a snap. Linebacker Paul Vassallo recovered at the Bulldogs' 22.

The Bulldogs forced Arizona to punt on the Wildcats' first possession, and then picked up the game's first first down. But the highly touted Foles-to-Juron Criner combination got the Wildcats started, the QB hitting the 6-4 receiver in the seam between two Citadel defensive backs for a 44-yard gain, setting up Grigsby's 3-yard TD run at 6:25 of the first quarter.

Foles, certain to be the first Arizona QB drafted by the NFL since 1985, found running back Keola Antolin for 29 yards on a screen and David Douglas for 14 yards over the middle. That set up a 4-yard TD pass to Wright for a 14-0 lead at 13:20 of the second quarter.

Despite the score, the Bulldogs earned some respect from Arizona players.

"I had a lot of respect for those guys," Grigsby said. "I had `9-11' (written) on me because after some of those guys graduate, they're going to be out there fighting for our country."