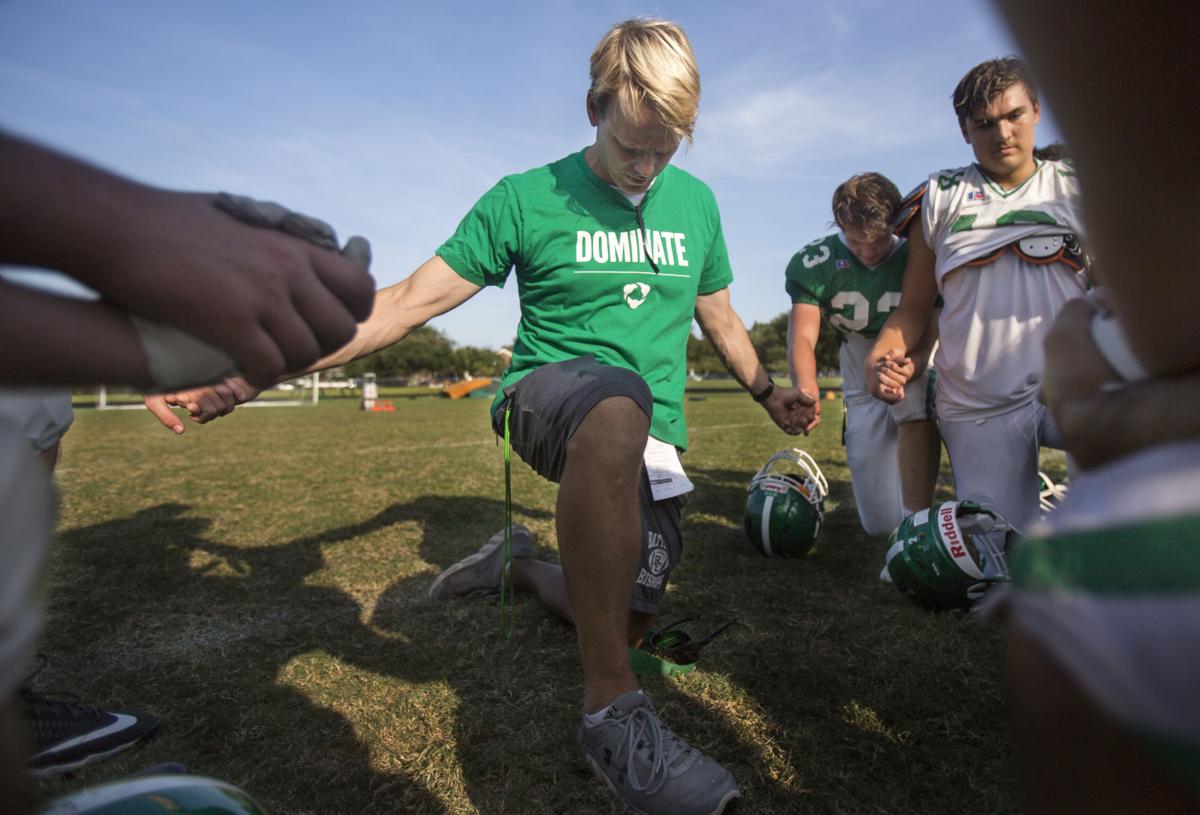 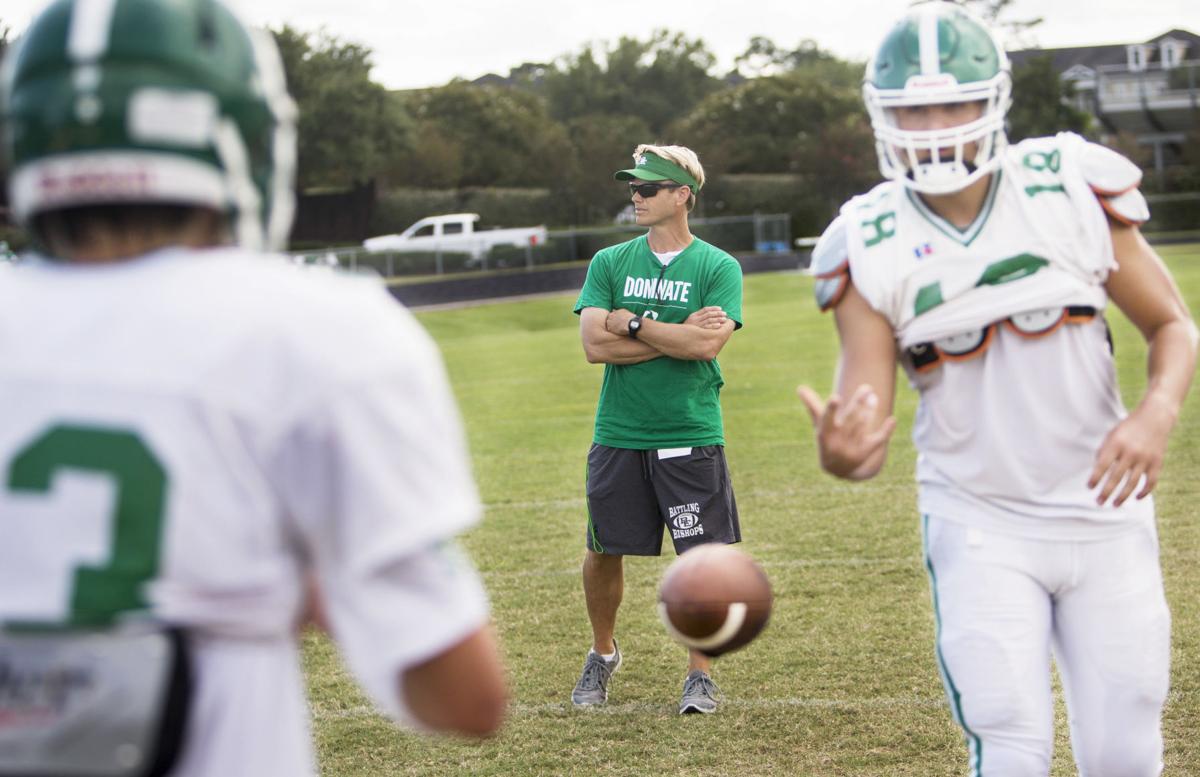 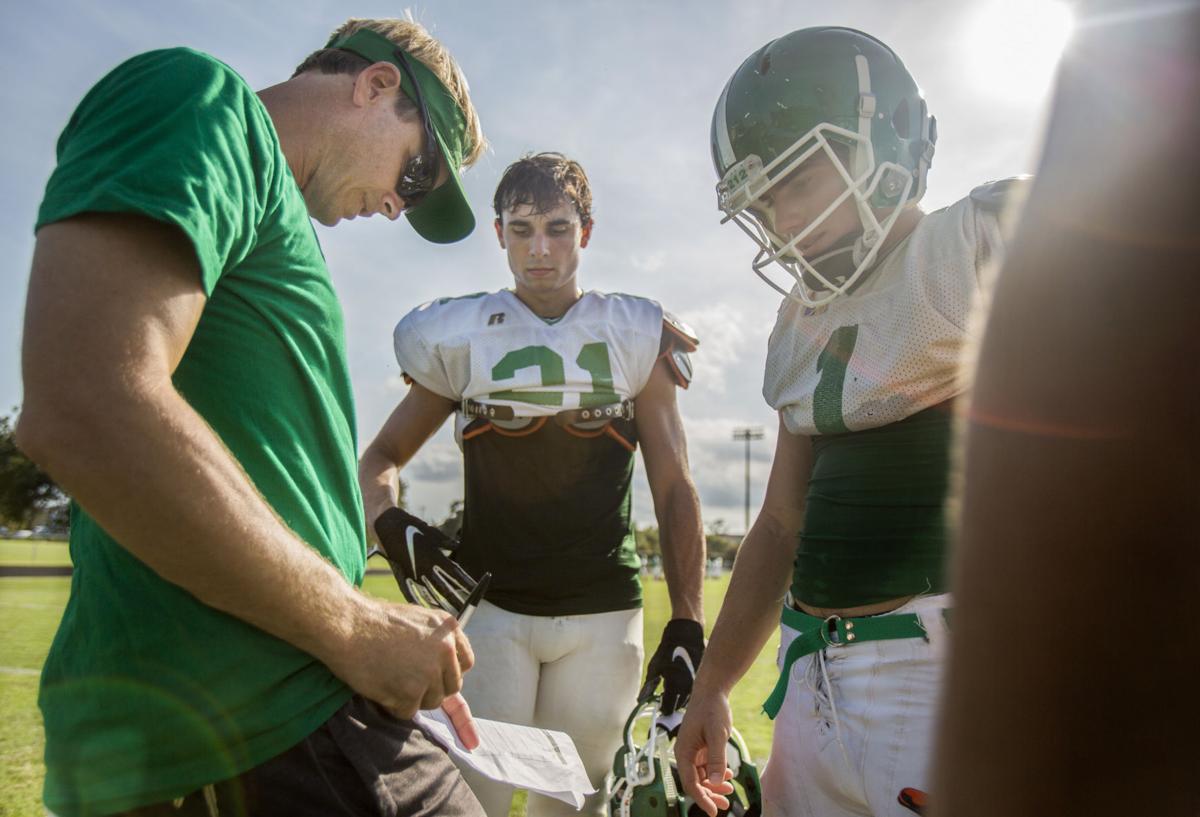 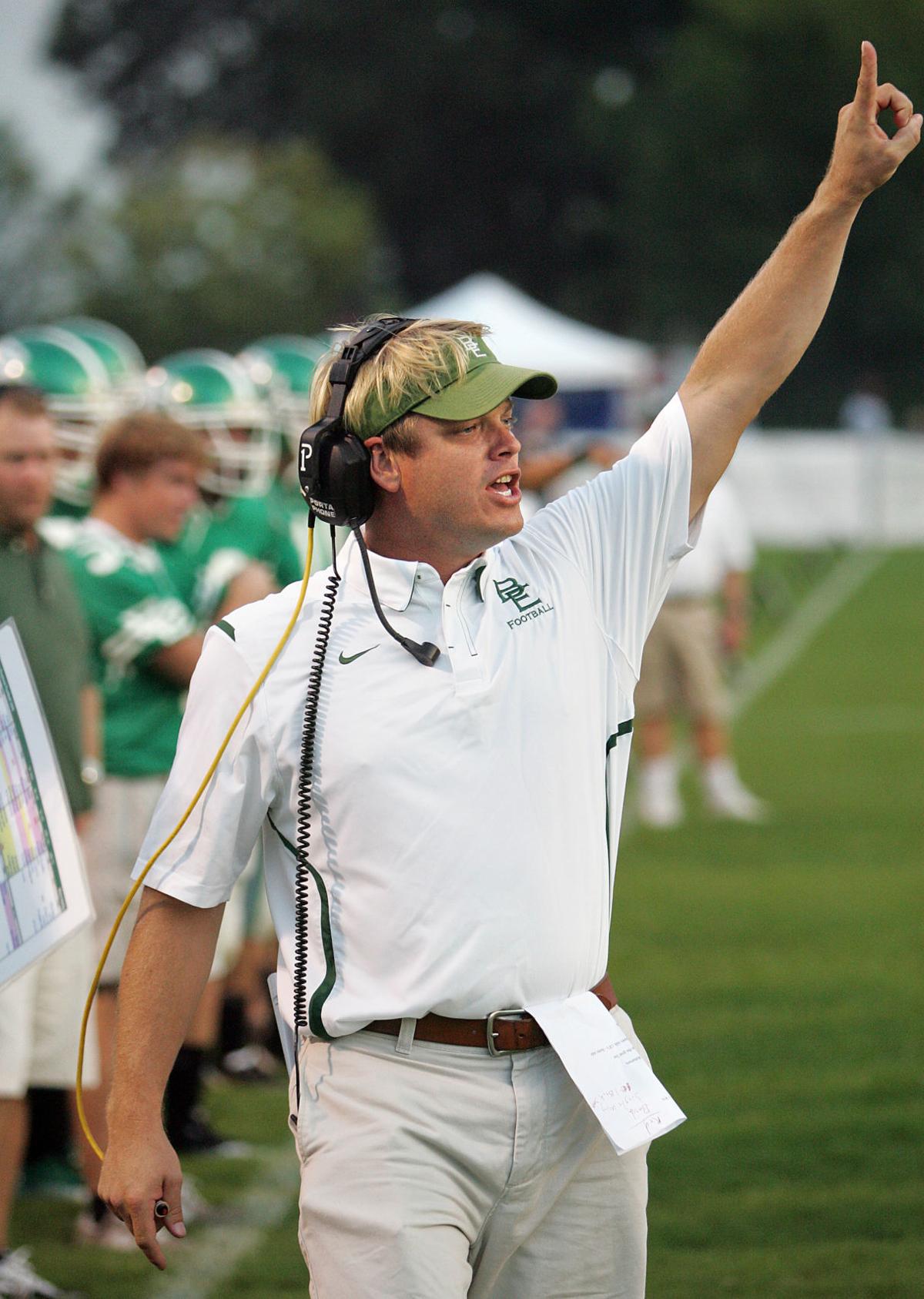 Bishop England coach John Cantey on the sideline during a game prior to his illness, which resulted in him losing 30 pounds. File/Staff)

When Bishop England athletic director Paul Runey stepped into the office of head football coach John Cantey that late summer morning a year ago, he barely recognized his longtime friend.

Runey, who was Bishop England’s defensive coordinator when Cantey was a hard-hitting safety on the football team in the late 1980s, has known Cantey his entire life.

What Runey saw that morning shocked him. Cantey was a shell of his former self — his skin grayish, his face gaunt. His frenetic energy, which had been a trademark for the past decade with the Bishops, was non-existent.

Cantey had been suffering from ulcerative colitis — an inflammatory bowel disease that causes long-lasting inflammation and ulcers (sores) in a person’s digestive tract — since November 2017. He had lost more than 30 pounds.

It finally got the best of him last August. Three days after the Bishops' season-opening loss to First Baptist, Runey knew it was time for an intervention.

“I went in there and told him, 'As your friend, as your athletic director, you need to take a leave of absence,'” Runey said. “We talked about it, and you could tell by the time we were finished, there was a sense of relief in his eyes. He knew it was the right thing to do.”

Cantey would miss the next two months, returning for Bishop England's final three games. Through medication and a change to his diet, Cantey has recovered, regaining his energy and strength as he returns to the sideline Friday night when Bishop England opens the season at Baptist Hill.

“It’s been a long, slow, painful recovery,” said Cantey, 45, who became the Bishops' head coach in 2008. “It feels great to be back, to be around the team, around the kids, again. I feel like I’m about 85 to 90 percent of what I was. I’m still not totally healthy, but I’m so much better now than I was even a few months ago.”

Cantey had a flare-up from ulcerative colitis when he was in his 20s, but with medication the issue quickly went away. He showed no signs of the condition until it struck again during the football playoffs in 2017.

“We were making a trip up to Dillon, and I wasn’t sure I was going to be able to make it,” Cantey said. “It was one of the longest bus rides of my life, but I made it.”

He returned to school and tried to teach his classes, but the loss of fluids and blood from severe diarrhea made him weaker and weaker with each day. Cantey reduced his workload and was teaching classes just three days a week.

“When I had a planning period or a break at school, I’d just go into the training room and lay down and hope I would be OK to teach the next period,” Cantey said.

When Cantey got home, he had nothing left for his wife, Haley, or his three children, John Robert (7), Lily Kate (5) and Thomas Hayes (4).

“John is normally so active and wants to give everything to everyone, but he was just so exhausted when he came home,” Haley said.

Cantey barely made it through spring practice in 2018. After the final practice, Cantey addressed the team's parents and then was immediately taken to the hospital for a blood transfusion.

His symptoms got worse over the summer. Doctors tried several different medications, but nothing worked.

“Some of the drugs just kept me up all night,” Cantey said. “I’d bring my kids to school in the morning, then come home and try and sleep all day. I was doing a lot of parenting from my couch.”

He spent hours on the internet searching for cures.

“I’d find him up all night reading blogs and trying to find anything that could help,” Haley said.

It wasn’t until after that first game of the season last August that Cantey gave serious consideration to taking a leave of absence. The talk with Runey pushed him over the top.

He told his team that afternoon. Then went home and told Haley.

“It was about time,” she said.

He tried to work from home, going over game plans and video to help his team prepare.

“I couldn’t sit at a computer or do anything, I just didn’t have the energy,” Cantey said.

The worst of the illness came last September. Hurricane Florence was approaching and Cantey packed up the family and evacuated to his in-laws home near Greenville.

“We set him up in a room at my mom’s house and he could barely make it to the bathroom a few feet away,” Haley said. “I thought he was going to die.”

Haley is convinced the family would not have made it through the ordeal without the Bishop England football community.

“We’ve had amazing support,” she said. “We went months without preparing our own meals. Bishop England has this club called ‘Random Acts of Kindness’ that would prepare meals for us. We’d get cards, offers to babysit, so we could concentrate on taking care of him and the children.”

Cantey's life changed significantly after he came across a book — “Life without Bread” — that advocated a diet low in carbohydrates.

“Before this, my diet was coffee and Doritos most days,” Cantey said. “I think it was my diet and stress that caused this whole thing.”

Cantey began cutting carbs out of his diet.

“I thought I was doing so well with these smoothies that had bananas and apples, but they have tons of carbs,” Cantey said.

He changed to a low-carbohydrate diet and saw immediate results.

“In three days I went from going to the bathroom 20 times a day to three times,” Cantey said. “All the medications I took didn’t do any good. I guess doctors and drug companies don’t make billions of dollars from telling people to eat lettuce.”

Cantey has gained about 15 pounds back and said his energy level is nearly back to normal.

“I can see the light at the end of the tunnel, and it’s not an oncoming train anymore,” Cantey said. “The thing I love about coaching is being around these kids and mentoring them. I have not been able to do that for a while. It feels great to be involved again.”