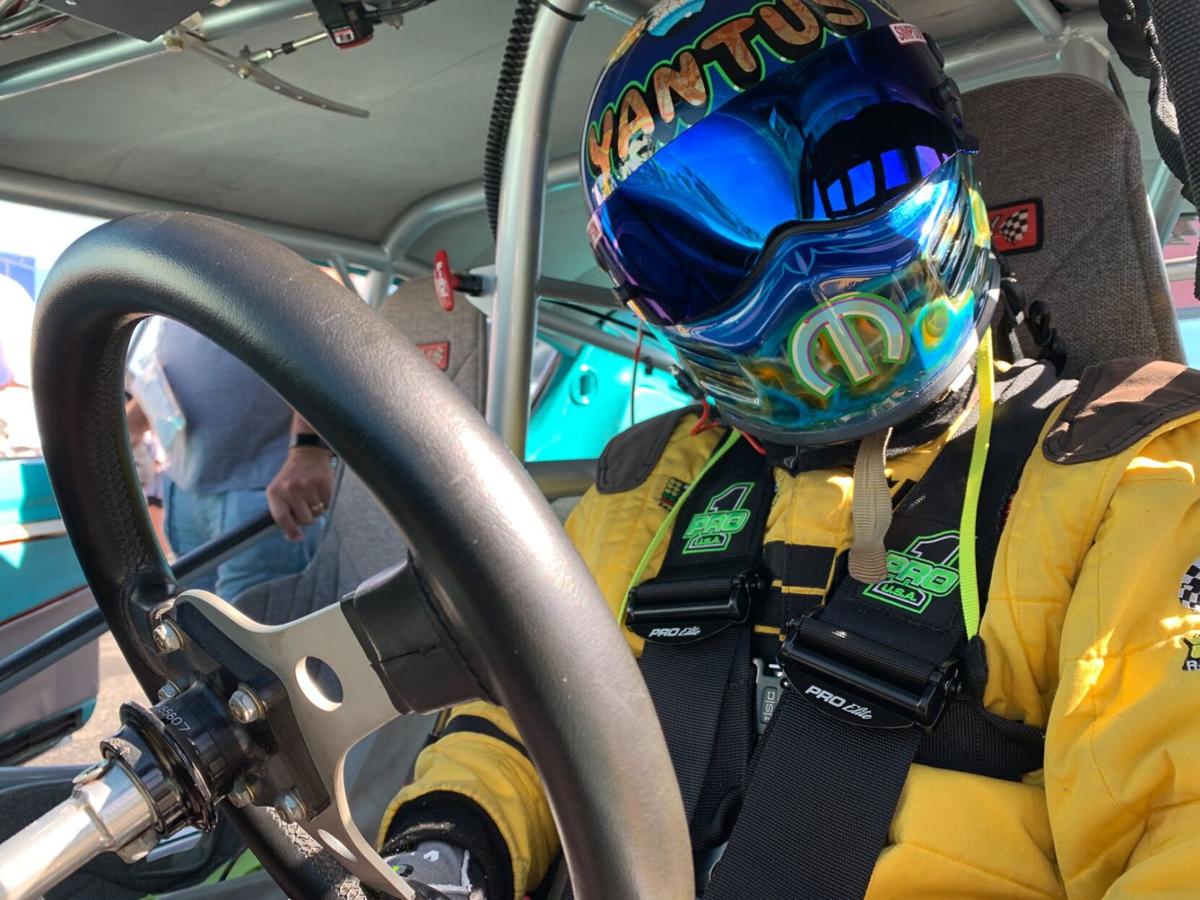 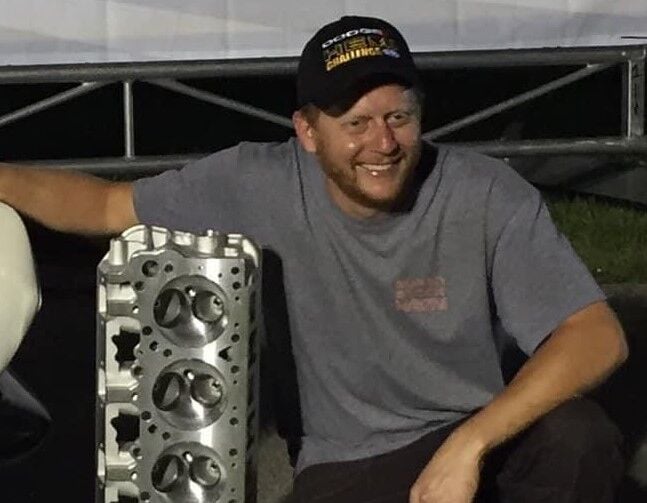 Charleston's Stephen Yantus III with his trophy from winning at "The Big Go", the Super Bowl of the National Hot Rod Association. Provided 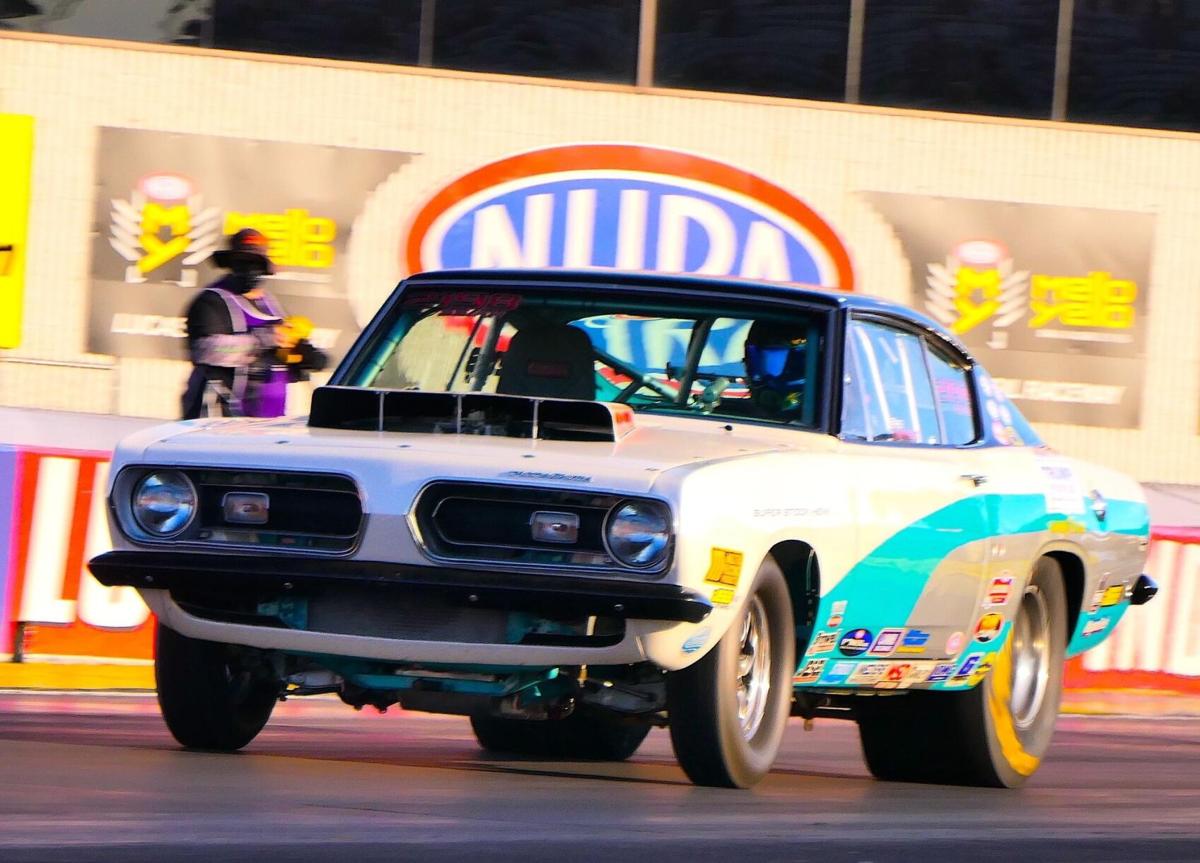 The Plymouth Barracuda, driven by Stephen Yantus III and owned by Anthony Rhodes, that won its division at The Big Go, the Super Bowl of the National Hot Rod Association. Provided

As the Christmas tree starting light blinks down to green, Stephen Yantus III has the clutch engaged and the 426 cubic inch Hemi engine of his 1968 Plymouth Barracuda revving at 6,200 revolutions per minute.

Yantus pops the clutch, and the front end of the 3,200-pound car heaves skyward. For about 60 feet, the Barracuda blasts forward on its rear tires. Bolted inside the roll cage, Yantus can see only sky through his tinted visor.

"You are just trusting the car is going straight, and you are along for the ride," he said.

Even while the car is standing on its rear wheels, Yantus shifts into second gear, then 1.5 seconds later into third. Halfway down the quarter-mile track, he's shifted the Barracuda into fourth gear and is nearing a top speed of 158 mph.

"It's an adrenaline rush," said Yantus. "There's nothing in the world like getting in a car like this. It's so heavy and violent, everything shakes. And you are bolted and strapped into the car, so you feel everything."

Yantus, a native of Pennsylvania who now lives in Charleston, felt the ultimate rush in drag racing last week, when he won his class at "The Big Go." That's what they call the National Hot Rod Association's U.S. Nationals, held each year in Indianapolis.

"It's like the Super Bowl or Daytona or the Indianapolis 500," Yantus said. "It's the epitome of all races."

Yantus, 35, drove the '68 Barracuda to victory in the Dodge Hemi Challenge, unseating four-time defending champion Jimmy Daniels in the process.

He won a check for $15,000 and some notoriety in the drag-racing world.

"Am I famous?" he said. "From a modesty standpoint, I'd say no. But if you Google our name now, there's 15 or 20 articles about us winning this deal."

The victory was the culmination of years of work for Yantus and car owner Anthony Rhodes, owner of Big Red Inc., an equipment supplier and trucking company in North Charleston. Yantus works as a transport manager for Rhodes and Big Red.

"Anthony bought a car and started driving it," Yantus said. "And it kind of escalated out of control from there. To get into Super Stock Hemi cars, it takes a lot of guts and a lot of time."

Yantus grew up as the son of a truck driver in Pennsylvania. He and his family would often make the trek to Indy for the NHRA U.S. Nationals.

"My cousin and I used to go and talk about how cool it would be to win one of these races," Yantus said. "And when I won, he was there along with my dad and his brother, so it was a big deal for all of us."

Yantus started out racing go-karts and motorcycles. But when he got old enough to get his driver's license, he gravitated toward drag racing, which pits two cars against each other in a short sprint.

"I couldn't see myself putting in all this time during the week and having somebody else bashing your car and tearing up your stuff," he said. "There are guys who like that, but I spend too much time on my stuff to have someone else tear it up."

Yantus and Rhodes work out of a garage in West Ashley, a space stuffed with cars, engines and a 90-foot long hauler. The race team demands a lot of time for Rhodes and Yantus, the father of twin girls.

"It's a very family-oriented sport, but it takes a lot of time," Yantus said. "When my girls come to races, one will usually sit and color in her coloring book. The other will have her head in the car, wondering what's going on. It demands a lot of your team and family, so when you win, it's very satisfying."

One key to the team's success was convincing noted engine builder Charlie Westcott, based out of Parma, Michigan, to build him a motor.

"I begged Charlie for five years to build a motor for me, but he wouldn't do it," Yantus said. "He kept telling me to find another hobby."

But when the coronavirus pandemic caused a downturn in business, Westcott agreed. Yantus regularly makes the 2,500-mile roundtrip to pick up transmissions in Pennsylvania and the Westcott-built engine in Michigan.

The 1968 Barracuda owned by Rhodes and driven by Yantus is one of just 55 Super Stock Darts and Barracudas made that year. They were manufactured specifically for drag racing and are not street legal.

"This vehicle is not manufactured for use on public streets, roads or highways, and does not conform to motor vehicle safety standards," reads a sticker inside the door. The engine specifications are limited to those in place in 1968.

"The motor makes over 1,000 horse power and turns almost 10,000 RPM," Yantus said. "They are extremely volatile, very finicky and they break a lot."

At Indy last week, Yantus was the fastest driver in the 15-car field during qualifying. He put together a string of 8.4-second times in the elimination runs before dusting Steve Comella in the finals with a time of 8.41.

The only disappointment? His interview on NHRA TV.

"It was really emotional," Yantus said. "My speech on NHRA was awful. Right before I went on TV, I went over in my head what I was going to say and had it all prepared.

The good news: There's always next year at the Big Go.