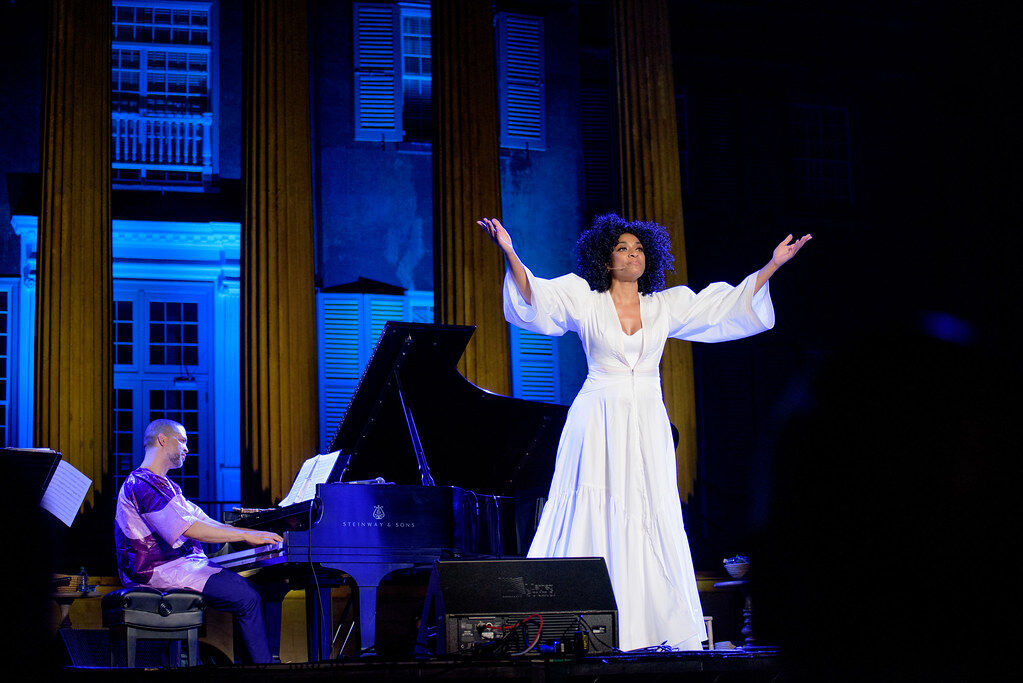 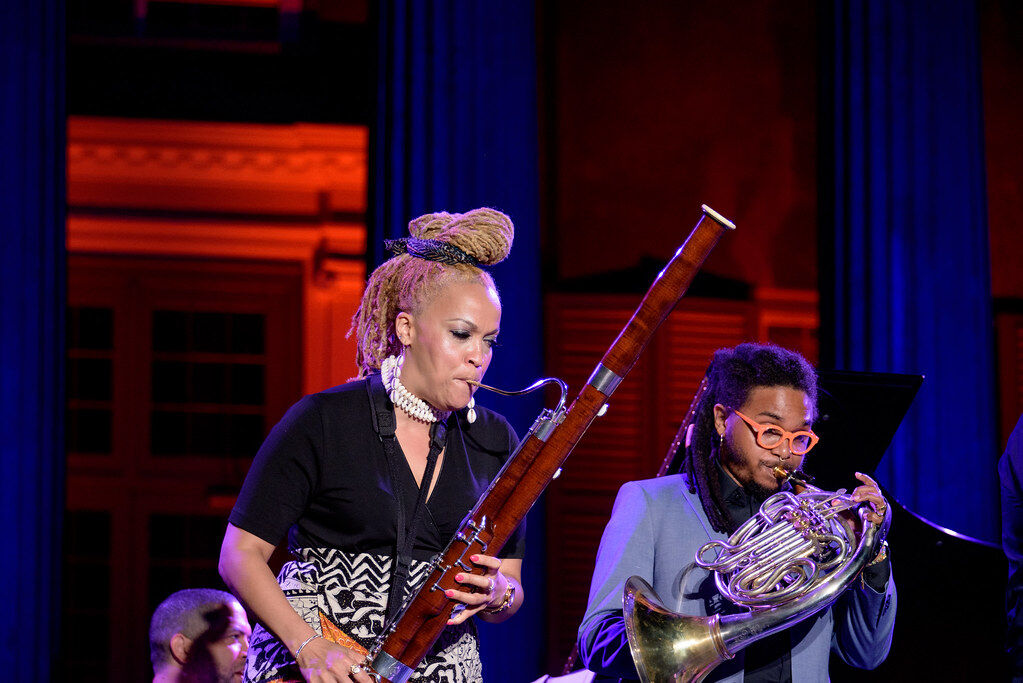 At some point, the minds behind the Spoleto Festival USA Wells Fargo Jazz Series must have thought, "Jason Moran."

They could have stopped there and had a winning, headlining show. The pianist/composer and former MacArthur Fellow has more than a dozen solo albums and is one of the most prolific and innovative voices in contemporary jazz.

But that would have been too easy, and too obvious. Friday night’s “Two Wings” performance — the brainchild of Moran and the multifaceted mezzo-soprano Alicia Hall Moran, to whom he is married — provided us with something far more interesting.

The event (“concert” is inadequate, for reasons that will become obvious) asked us to consider jazz history in conversation with African American history as told through other genres, musical and otherwise. It was a vivid testament to what Amiri Baraka called the “changing same” of Black American music, in which the unifying thread of resistance, creative adaptation to dire circumstances and endless experimentation runs through expressions from rhythm and blues to free jazz.

The Morans first presented “Two Wings” in Spring 2019 at Carnegie Hall, and performances followed in Washington, Chicago and Hamburg, Germany, before the pandemic foreclosed on the possibility of further tours. While some of the skeleton of the show has remained the same (centered largely around the Morans’ own compositions and life stories), it seems to have been conceived as a flexible, almost modular concept celebrating the multifaceted and diverse experiences of Blackness, displacement and migration in 20th century America.

Heavily indebted to Isabel Wilkerson’s masterful history of "The Warmth of Other Suns: The Epic Story of America's Great Migration," the New York premiere interspersed readings of that book by its author with other performances, including a combination sermon/gospel performance from Pastor Snokie Norful and a chamber ensemble led by Cuban American composer/conductor Tania León. In Chicago, they were joined by local literary hero Margo Jefferson ("Negroland: A Memoir") and young ensembles from the Kenwood Academy.

None of those performers made it on the Spoleto program, unfortunately. But Friday’s performance did demonstrate that the Morans are keenly aware of Charleston’s place in this long and complicated story.

Alicia Hall Moran spoke from stage with visible emotion about having seen Spoleto's 2016 "Porgy and Bess" production here, and the evening’s musical selections were anchored by narrator Julie Dash reading from her novel "Daughters of the Dust," which chronicles the lives of Gullah protagonists, which are shaped by moves from St. Helena Island to Charleston and Harlem.

The musicians for the Spoleto performance included straight-ahead jazz luminaries such as vocalist Sharón Clark and trombonist Wycliffe Gordon, but also a wider cast of characters including the Imani Winds, a first-rate woodwind quintet of the Morans’ former Manhattan School of Music class, and a string ensemble that added depth and color through imaginative arrangements contributed by violinist Juliette Jones.

Spoleto Review: The Wood Brothers bring on both the funk and the folk

While jazz was, naturally, a lingua franca for much of this music, some of the most compelling and unusual music on the program came in pieces from outside of the genre, in the form of works by African American art music composers.

The program opened with a warm, intimate and affecting performance of Florence Price’s art song setting of a Paul Laurence Dunbar poem by the Moran duo. Two pieces for solo string instruments by New York native Coleridge-Taylor Perkinson made me wonder why his pieces have not been championed by more contemporary string players.

Cellist Seth Parker Woods played “Cavalry Ostinato,” Perkinson's meditative all-pizzicato piece, whose bluesy, modal variations recalled the close connections between early blues and the West African kora harp. Violinist Curtis Stewart followed with a virtuosic display that shifted between down-home fiddling and chromatic double stops up and down the instrument in a kind of Paganini-meets-the-blues showpiece. Listen up, classical musicians: these are works that should be standard repertoire.

Both Morans also appeared on the program as composers. The Imani Winds performed three movements from Jason Moran’s "Cane" suite, detailing his family’s migration from the Cane River area of Louisiana to Houston. The first movement built shifting, enigmatic harmonies over the frenetically syncopated stuttering pedal tone in the bassoon. The second featured a long, mournfully expressive clarinet solo, and the final movement included some saucy give-and-take between oboe and horn solos over a sparse tresillo groove.

A lot of the jazz repertoire was more conventional, but expertly rendered. Sharón Clark offered vocal versions of the Duke Ellington/Juan Tizol classic “Caravan” and Miles Davis’s "Boplicity,” the latter of which, with added lyrics by Ray Passman, became a mini-lecture on bop history, reminding us of its key players, hit tunes and the importance of flatted fifths.

Wycliffe Gordon’s trombone solos were a particular high point. With multiphonic hums and a deft plunger mute, he made the instrument growl, whine and speak. Jason Moran’s solo piano rendition of James P. Johnson’s “Carolina Shout,” a standard from the oldest of schools, took us time traveling through jazz piano styles, drifting from the lively left-hand stride of the early 20th century to moody post-bop harmonies, before bringing us full circle.

Fans hoping for a musical equivalent of Wilkerson’s book, a grand master narrative of the Great Migration, might have been frustrated by the artists’ steadfast rejection of that approach. Asking the brief character-based snippets of Dash’s novel to do the same expository framing work was not always coherent.

Chronology, both musical and personal, was mixed up throughout the evening, with some of the oldest material presented last, in the form of the well-known Negro spirituals “He’s Got the Whole World In His Hands” and “Two Wings.” The breadth and diversity of the program might well have confounded audience members unfamiliar with the broad strokes of the history of the Great Migration.

But that refusal to wrap up the Black experience in a neat package is, I think, partially the point: “My thesis,” Alicia Hall Moran explained near the show’s end, gesturing across the stage at her compatriots, “My thesis statement is these people.”

There’s no doubt that “Two Wings” was a celebration of the diverse array of artists on the stage, and the varied paths that brought them there.