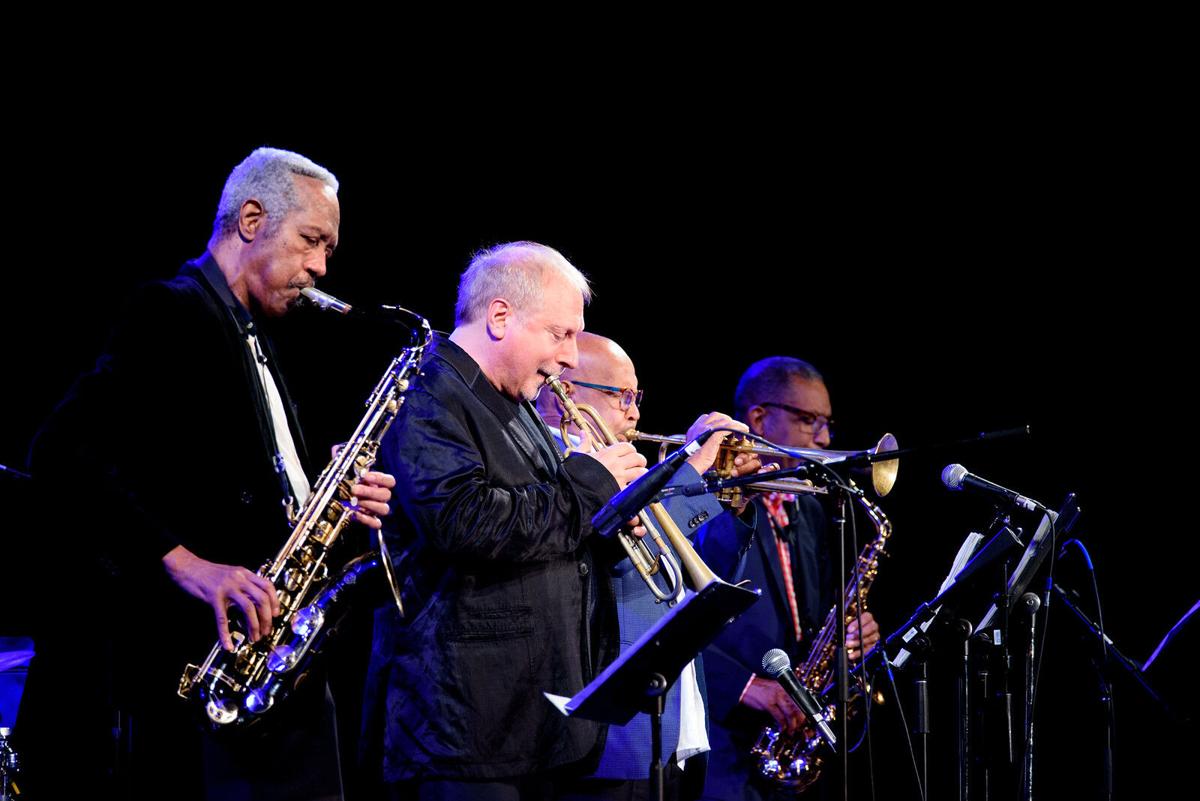 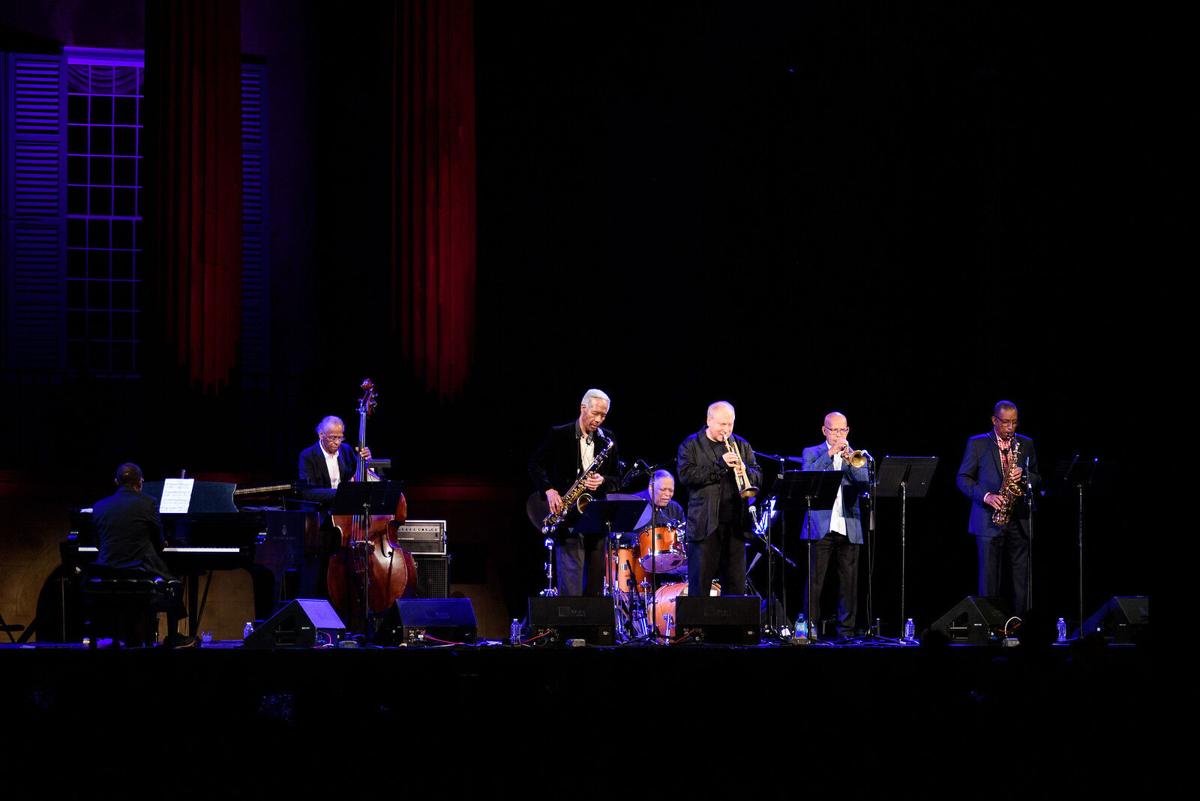 Jazz all-star bands typically fall flat of expectations. Assembling the top talent can leave an audience wanting of perspective and cohesion as egos battle it out on stage.

This is not the case for the jazz supergroup The Cookers, who took the stage at the Cistern Yard on June 5 in Spoleto Festival USA's Wells Fargo Jazz series.

There’s a feeling of relief when you arrive at a gig to see a musician you are familiar with. It is a feeling of joy if there’s musical chemistry, and elation if it’s someone you wouldn’t mind touring with. The Cookers have bottled this rare bolt of lightning. The septet’s first festival performance since the beginning of the pandemic showcased the group’s effortless unity and commitment to innovation.

Founded in 2007, The Cookers went beyond the one-off tribute concert for Lee Morgan and Freddie Hubbard and have been steadily recording since 2010 with a new record due in the fall. Trumpeter David Weiss leads the ensemble, which includes drummer Billy Hart, saxophonist Bill Harper, trumpeter Eddie Henderson, pianist George Cables, saxophonist Donald Harrison and bassist Cecil McBee.

Collectively, these musicians have been at the center of the New York jazz scene. Hart and Henderson performed in Herbie Hancock’s Mwandishi and alongside Miles Davis. McBee has collaborated with Pharoah Sanders and Bobby Hutcherson, while George Cables has performed with Art Blakey and Dexter Gordon, among others. Harper cut his teeth in the New York scene as a sideman for Elvin Jones and Max Roach. New Orleans native Harrison started his career performing with Roy Haynes and Art Blakey and has been imaginatively connecting modern swing with the roots of New Orleans and Afro-Caribbean music.

While the musicians share collaborations with a dizzying list of jazz greats, they also share a passion for composition. The group has become a space to showcase the extensive compositional output of its members.

The show started off with Harper’s “Call of the Wild and Peaceful Heart” from the group’s eponymous 2016 album. It was a bit of a stodgy start as the sound crew took time to dial in the powerful strikes to Hart’s snare and toms.

By the start of Harper’s solo, the group began to gel and find the pocket, just in time to showcase Harper’s acrobatic runs. Weiss took over with a crisp clarity as he developed his riffs and motives, while Cables pulled double-duty maintaining the groove-based vamp in his left hand to support his own sonic explorations.

Turning to McBee’s 1989 composition, “Peacemaker,” the group delivered an introspective yet driving performance. Solos from Henderson and Harrison were centerpieces to this tune. Henderson was not overshadowed by the powerful rhythm section but commanded the stage while leading a dialogue with Hart throughout his solo. While Henderson crafted a clear arc, Harrison developed a solo of twists and turns as he continually reached a peak, only to set up base camp and continue climbing.

This kept the audience guessing, spurring on the group with applause throughout Harrison’s solo. Hart stepped all the way out, giving space to hear McBee stretching to the ends of his bass’s register, all while vocalizing to sketch out the direction of his improvisation. The only shortcoming to the tune was the fizzled-out ending, which seemed to require a studio fade out to gloss over the disorganized conclusion.

Spoleto Review: The Steep Canyon Rangers 'will play through any damn weather'

The threat of rain made for a humid evening and difficult playing conditions. Weiss commented on the cloud of bugs surrounding his music as he introduced the next tune, explaining that while the pandemic threatened the livelihood of many musicians, The Cookers continued to create.

The group’s COVID-19 silver lining was time away from touring to dedicate towards a new album of original compositions. The audience welcomed a preview of the new album with Cables’ tune “The Mystery of Monifa Brown.” Originally written in 2016 as a birthday dedication to the publicist, critic and host of “Saturday Afternoon Jazz,” this tune features modal pedals with athletic melody and countermelody. This performance felt fresh and broke up the somewhat familiar and expected setlist from the group.

The set closed with Harper’s “If One Could Only See” and Hubbard’s “The Core,” which referenced the origins of the collective. Harper’s intimate ballad gave Cables an opportunity to weave a tapestry of blues, bop and beyond.

Delaying gratification, the group provided ample space for Hart’s solo in the closing tune. At the height of his solo, Harrison was grinning at his colleague’s mastery, bearing witness to this jazz icon.

Spoleto Review: At the Sarah Jarosz concert, 'an open heart looks a lot like a wilderness'

The Cookers do more than conjure up the jazz giants of yesteryear, and they perform and compose beyond the vague boundaries of “post-bop.” These musicians provide a glimpse of re-imagining jazz as more than a list of giants and more a story of collaborations while also pointing towards the horizon.

While the audience may have been a bit lackluster on a sultry Saturday night, Spoleto's programming this year was not. It provided a vision of jazz’s roots, where it’s been and where it’s going.