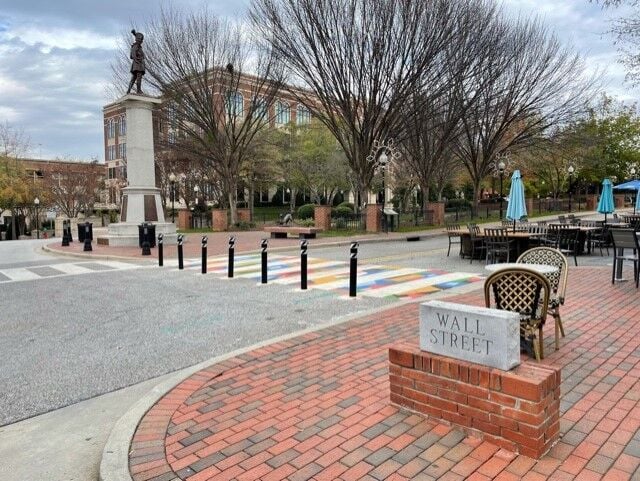 Morgan Square along West Main Street in downtown Spartanburg is being considered for a redesign. Chris Lavender/staff 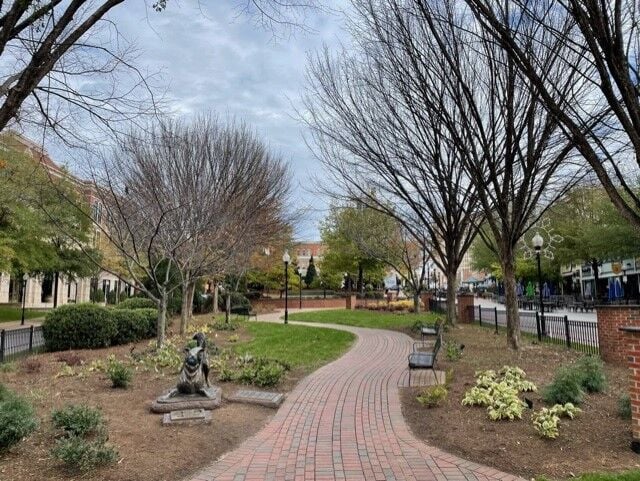 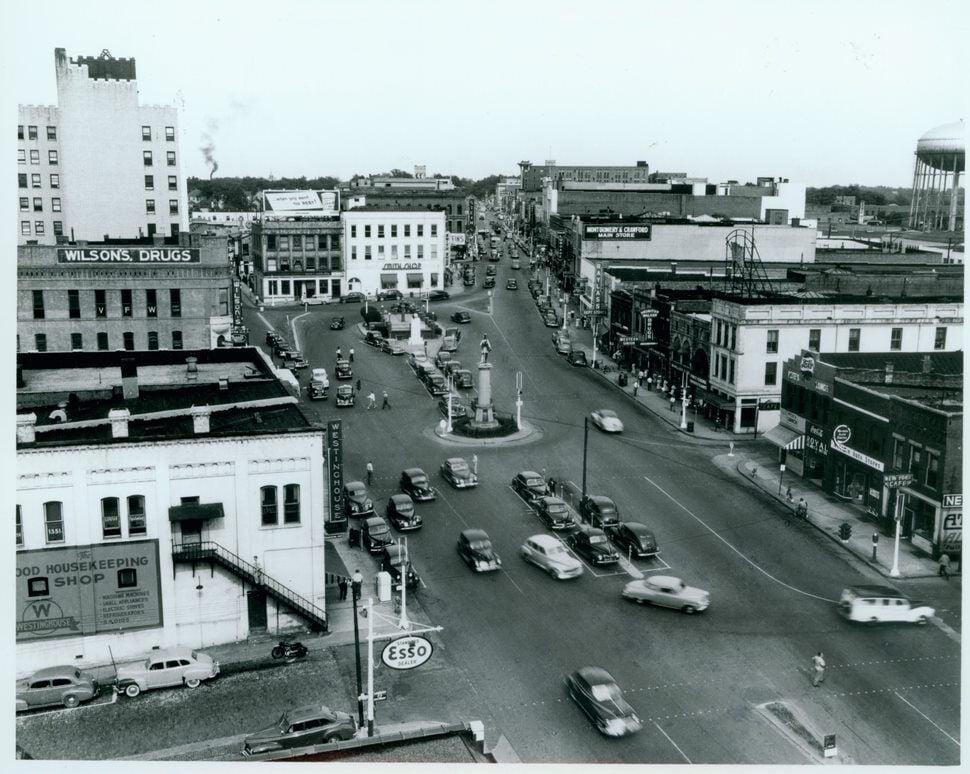 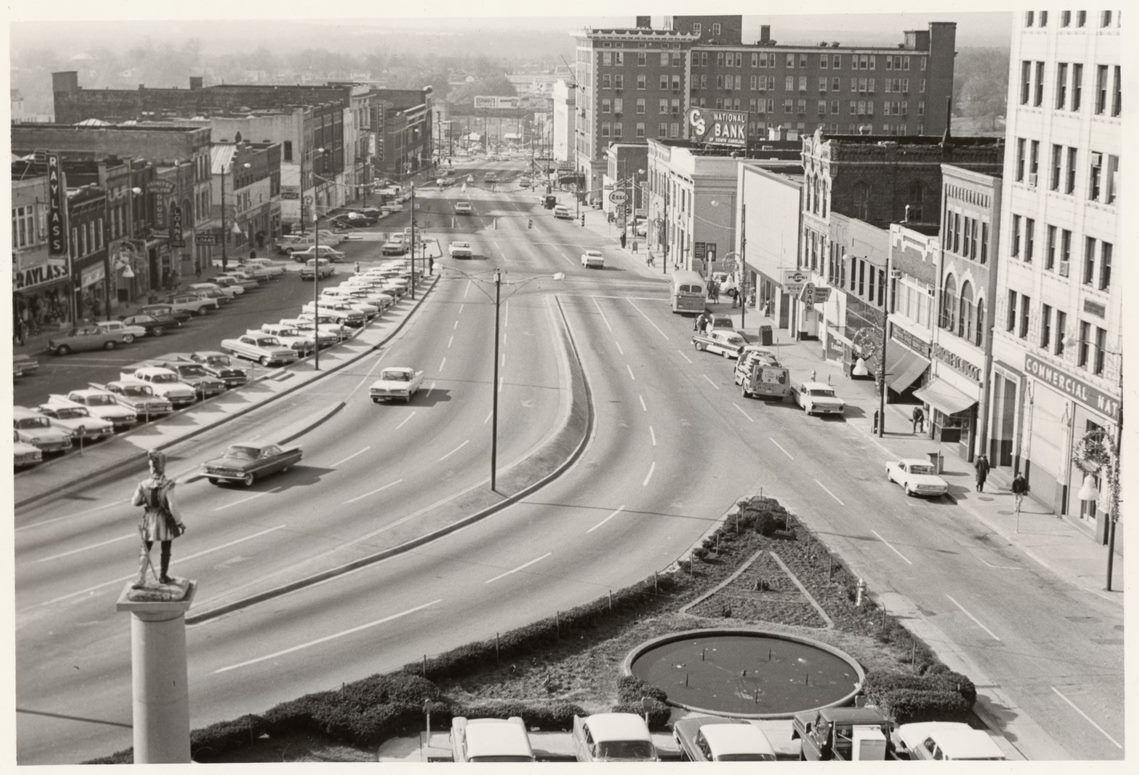 SPARTANBURG — Efforts to redesign downtown's Morgan Square continue with a public meeting scheduled for Dec. 13 at the Chapman Cultural Center to provide an overview of the redesign process which could begin in 2023.

An urban design planning firm MKSK has been hired to work with the Morgan Square Redevelopment Committee to develop a redesign with public input. Mayor Jerome Rice is a member of the committee, which met with representatives from MKSK on Nov. 18.

"We had the meeting with the design firm just brought on board so they can see the potential," Rice told The Post and Courier. "There will be a redesign of the square and we are just looking at all the possibilities."

City Council formed the Morgan Square Redevelopment Committee July 25, consisting of 13 members from the restaurant, real estate, business and development industries. The committee received information from 10 firms on how they might redesign and enhance the square near West Main Street. Three firms were interviewed, with Greenville-based MKSK selected by the committee for recommendation to City Council. City Council selected MKSK on Nov. 14 to assist with the redesign.

The committee has met on a monthly basis since it was formed. Rice hopes a redesign, which requires City Council approval, will help reshape Morgan Square.

"Our discussions are to make sure we do what is bet for Spartanburg so 20 years from now we can say the design fits," Rice said.

The first public meeting will be held at 4 p.m. on Dec. 13 at the Chapman Cultural Center at 200 E. Saint John St. Rice said the city will provide additional information about the redesign process at the meeting. A portion of West Main Street near the square has been closed to vehicle traffic since May 2020. City Council decided Aug. 8 to keep the street closed to vehicles through at least August 2024 while the city works through a redesign process.

City Manager Chris Story said it will cost the city about $250,000 for MKSK's design and engineering services. Working with the committee, Story said it will take MKSK between six to nine months to complete a proposed redesign and offer two or three options for City Council to consider.

Through the decades, the square has been redesigned and shifted to meet the city's growth and demands for services.

A map of the square from 1809 shows how adjacent parcels became developed with about 300 people living near the square and a few businesses including doctors and blacksmiths, Steinecke said. By 1826, the square had evolved into a rectangle shape.

Before the area was named Morgan Square, it was called the Public Square or Courthouse Square. Once the Daniel Morgan monument was dedicated at the site in the early 1880s, the square was renamed Morgan Square.

"By the late 1890s, you see a handful of trees in early images as the central part of the square is wide open," Steinecke said. "There was a fenced in area on the eastern end and a fountain was put in with a grassy featured park-like space. A debate later happens about redeveloping that space where the park was and having a building constructed there."

In the early 1900s, the square was paved with bricks and electric lights were hung on poles to provide light at nighttime. Industrial scale street lighting wasn't installed until 1910 when globe lights were installed on poles. In the 1930s, the space was used for outdoor events after a band stand was built on the square's upper level. Steinecke said pressures to redesign the square occurred in the 1950s when cars were used more when traveling downtown.

"There started to be more dialogue in the city on how to make downtown more accommodating for cars," Steinecke said. "A redesign in 1959 accounted for more lanes of traffic and parking and the Morgan monument gets moved to the eastern end of the square. Additional buildings were torn down for traffic lanes."

Former Startex mill in Spartanburg County to be redeveloped into housing, retail

There was a plan in 1968 to close Dunbar Street and create an outdoor shopping space, however, that plan was scrapped and developing East Main Street a few blocks from the square became the focus. During the period, Steinecke said debate continued in the city on how to best utilize the square. Later in 1973, the city developed a plan to close a portion of East Main Street to vehicles and create a pedestrian space for shopping.

"During that period downtown had entered a slump mainly due to the suburbanization that was happening in the city," Steinecke said. "People began complaining of older buildings (downtown) and didn't like the use of some of the buildings."

In an attempt to attract more people downtown and to Morgan Square, a Main Street Mall was developed. The mall was active from 1973 to 1989. A second phase of development planned near the northern end of Morgan Square during the time called for a hotels and new modern office space. A recession in the 1970s ended those plans. In the 1980s, a steering committee was formed to identify potential redevelopment of the square.

"There were calls for a large building on the square and remaking it into a pedestrian plaza instead of parking and lanes of traffic," Steinecke said. "People were turning away from a car dominant square in the late 1980s."

More trees were planted along East Main Street and Morgan Square. In 2005, the Daniel Morgan statue was returned to its original location and a central fountain was built. The borders of Morgan Square have not shifted much through the years.

Streaking Birdies Golf is a new business that will have five golf simulators that people can use for events, individual or group practice and lessons. The business will have its own bar and menu items and will open in the lower level of RJ Rockers Brewing Co. this spring. Read moreGolf simulation concept to open in Spartanburg's RJ Rockers brewery this spring

Residents and leaders from the Highland, Southside and Northside areas of Spartanburg will have a community-wide meeting at the beginning of February to talk about changes they’d like to see in their neighborhoods, encourage community partnerships and give those in attendance a chance to be updated on revitalization efforts within their communities. Read more3 Spartanburg communities to jointly discuss revitalization plans next month

Proposed SC-to-NC rail trail moving ahead, though some residents push back

The charge of assaulting a law enforcement officer stemmed from a 2018 incident in which prosecutors said the man crashed a vehicle that landed on an officer’s legs. Read moreGaffney man sentenced to 34 years for drug, officer assault charges