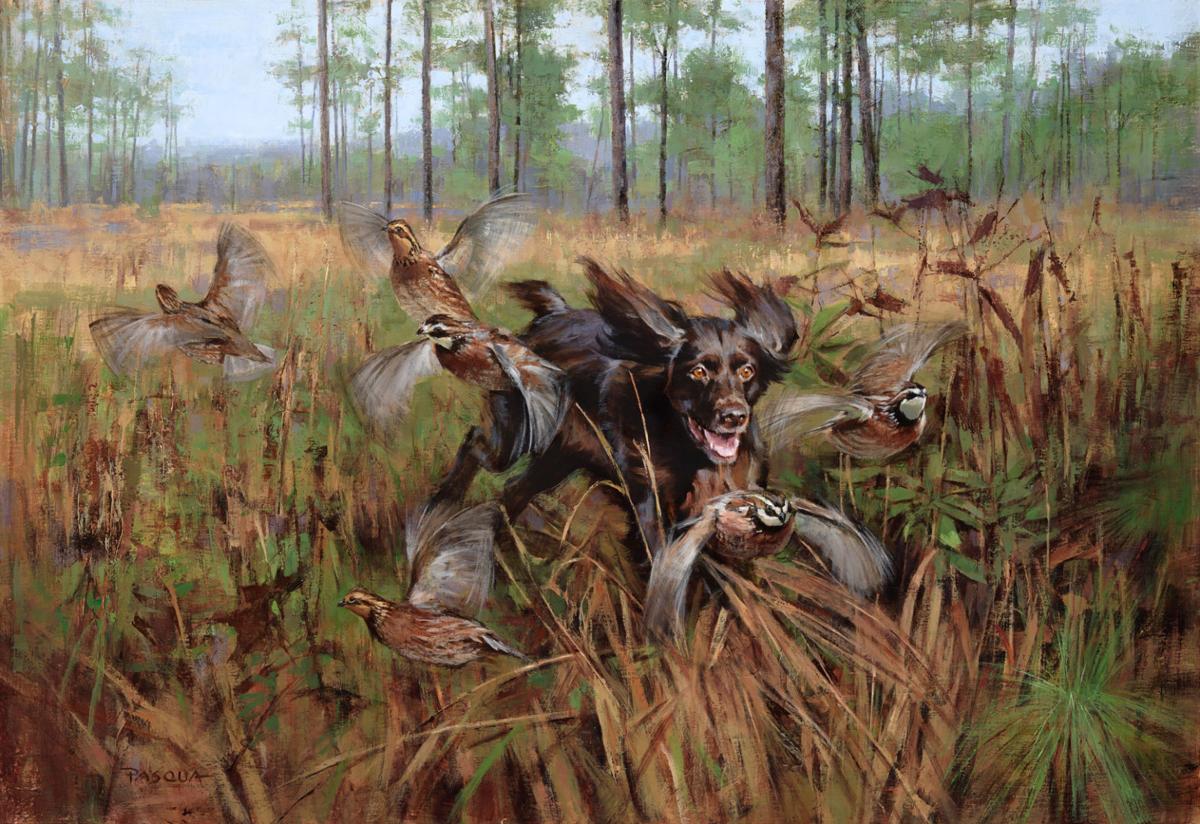 "Little Havoc" by Lou Pasqua is the featured image of the 2019 Southeastern Wildlife Exposition. It will be auctioned off. 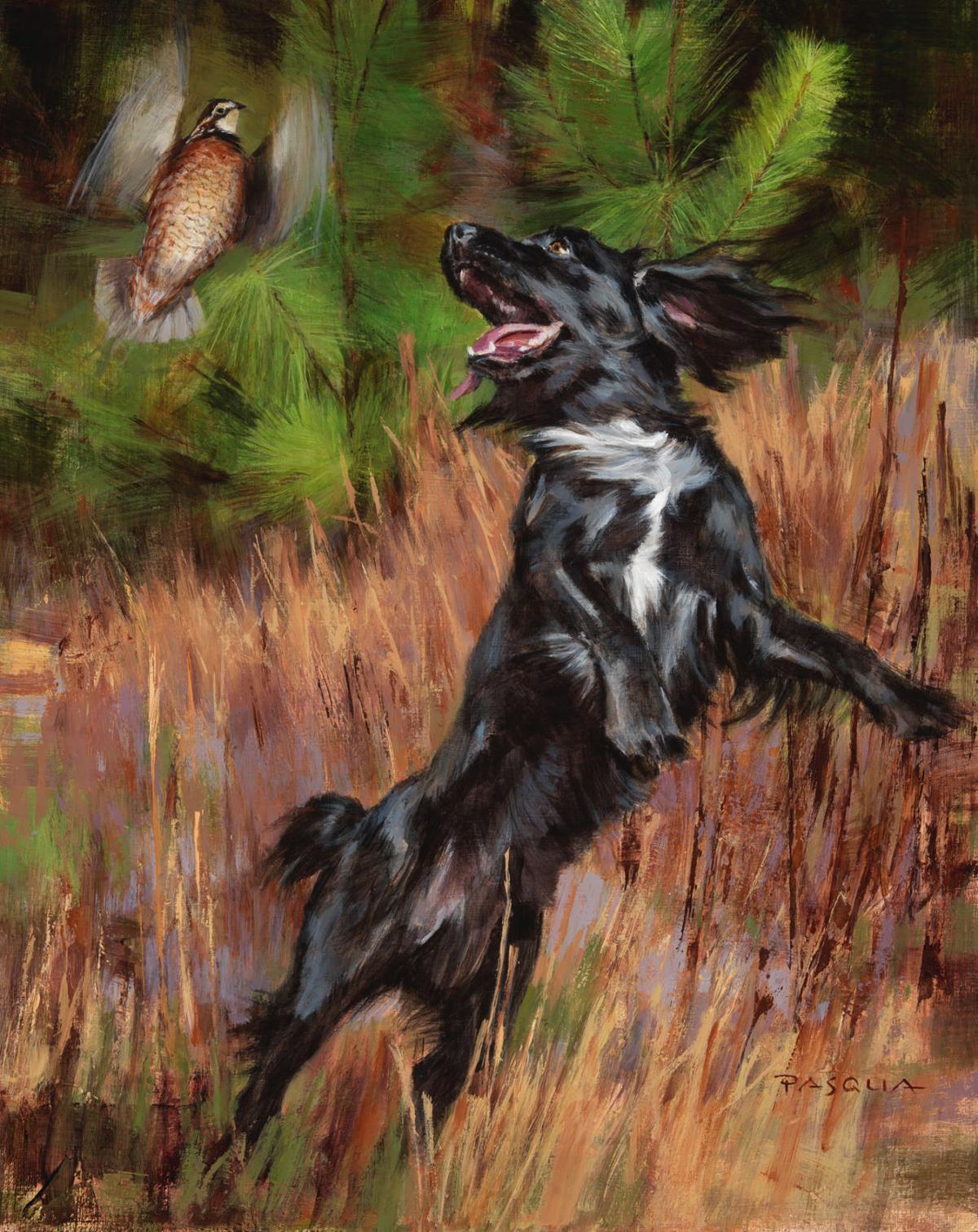 "The Disruptor" by Lou Pasqua is an example of his dynamic impressionism, and of his love for dogs. 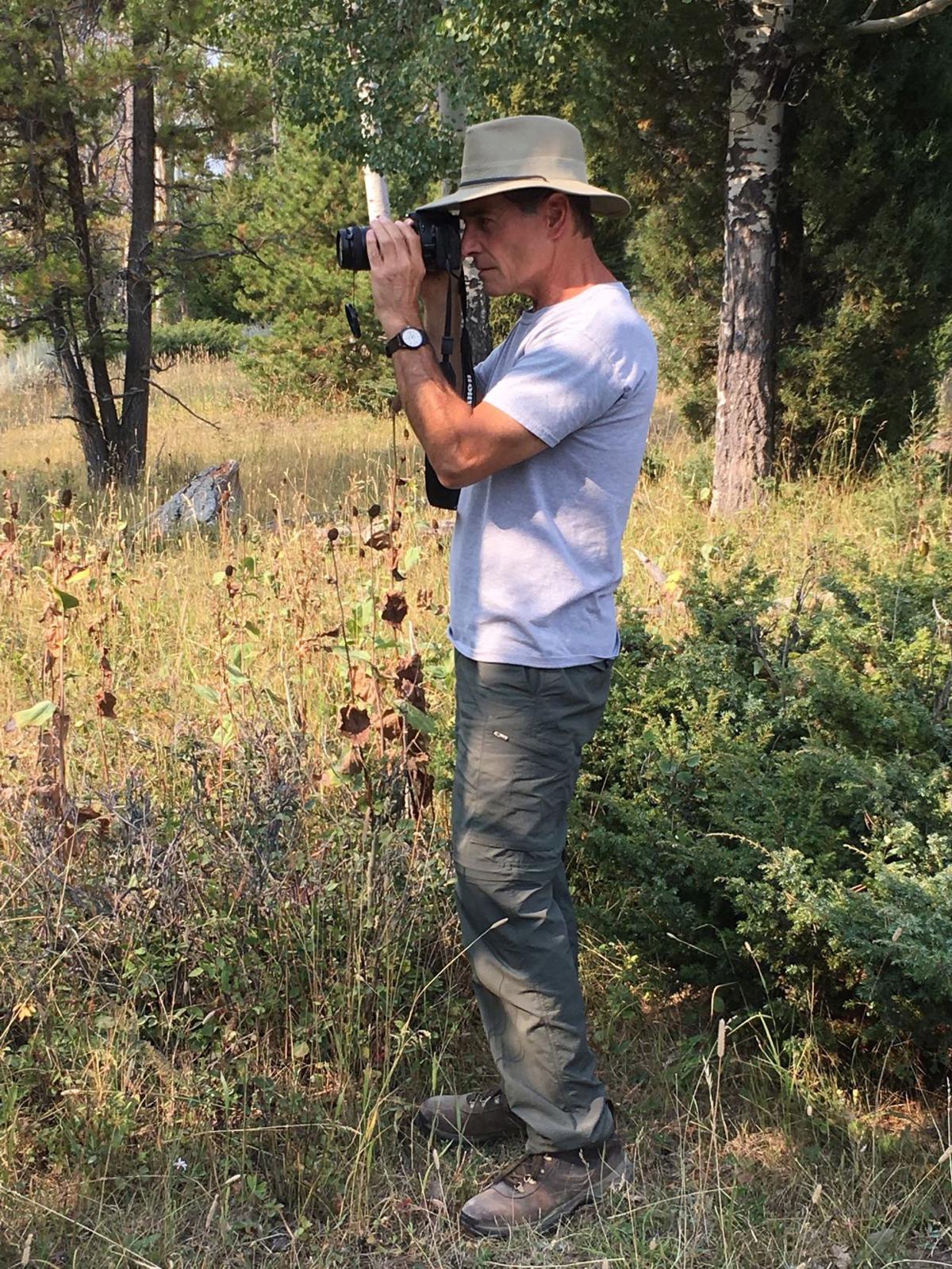 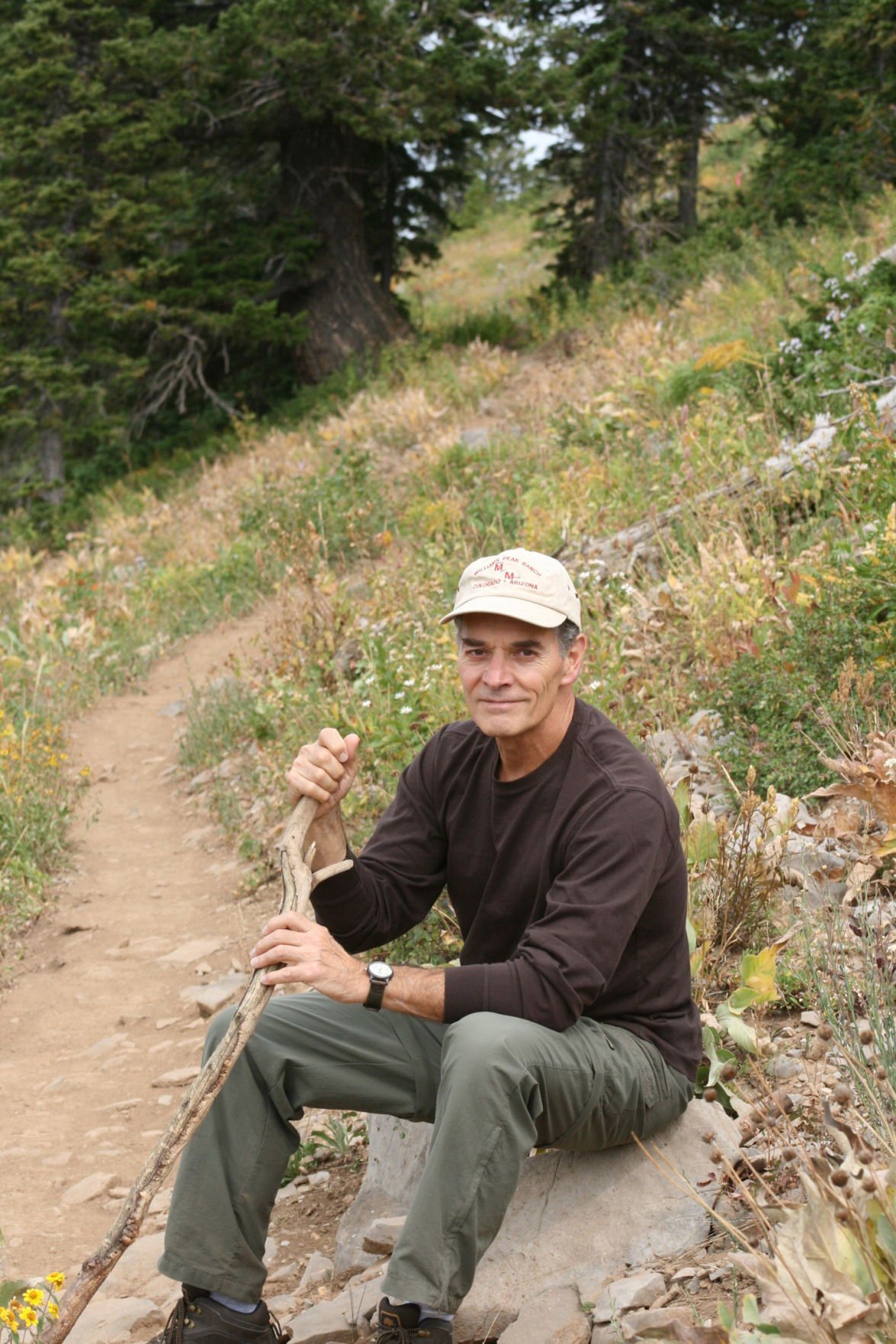 Lou Pasqua has loved the outdoors since he was a kid. But 20 years as a graphic designer delayed his painting career. 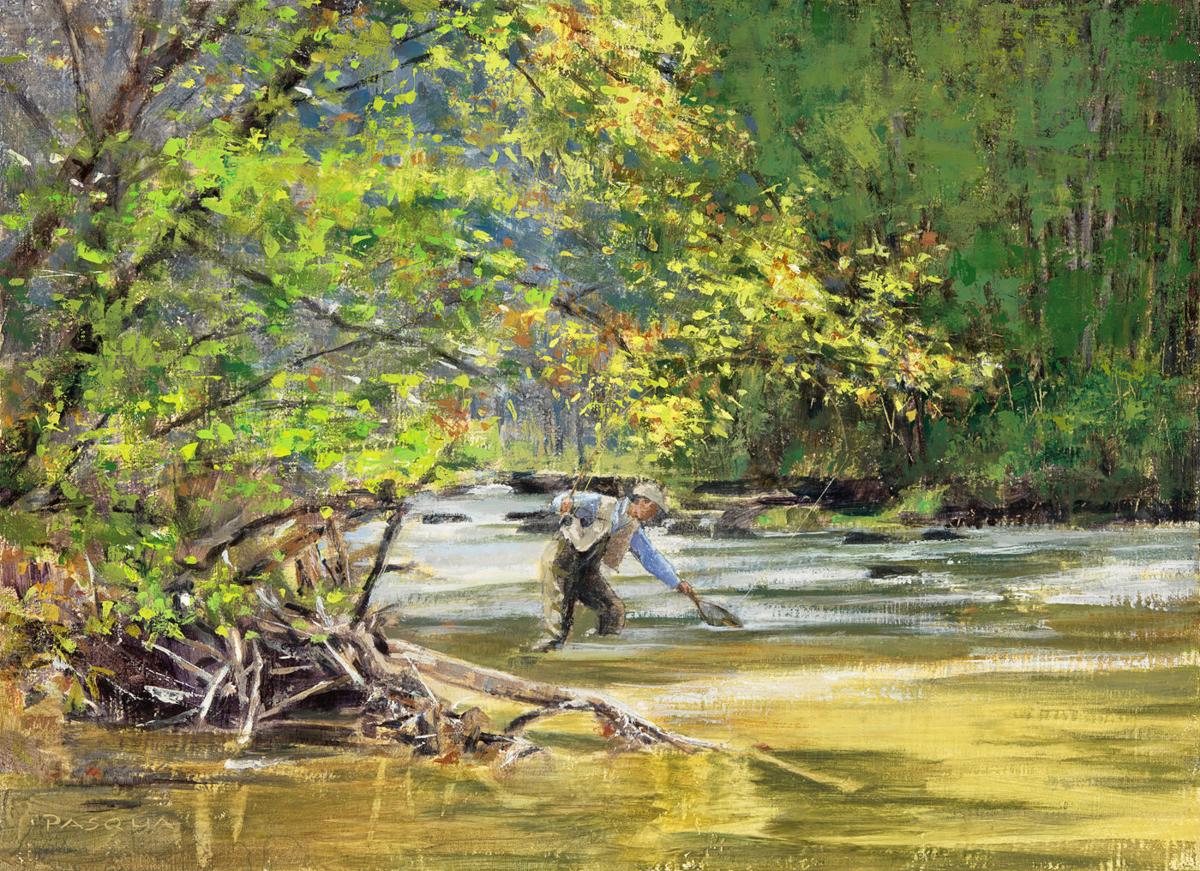 "Sunday Afternoon" by Pittsburgh-based Lou Pasqua, an example of his impressionist style.

"Little Havoc" by Lou Pasqua is the featured image of the 2019 Southeastern Wildlife Exposition. It will be auctioned off.

"The Disruptor" by Lou Pasqua is an example of his dynamic impressionism, and of his love for dogs.

Lou Pasqua has loved the outdoors since he was a kid. But 20 years as a graphic designer delayed his painting career.

"Sunday Afternoon" by Pittsburgh-based Lou Pasqua, an example of his impressionist style.

It can be hard for Lou Pasqua to finish a painting. He’ll set it aside for a while, then take a fresh look and find something that needs tweaking. But eventually he applies a final brush stroke and decides it’s done.

The result is an expressive image of, typically, hunting dogs, made with acrylics in an impressionistic style.

He’ll often work from a set of photographs, but his objective isn’t to capture all the details, he said. Rather, he strives to simplify the image.

“I start eliminating detail and getting it down to the basics,” Pasqua said. “The more simple you make things, they just come off so much better. I want to get to the core of the painting. I try to direct you to what I want you to see.”

This is the prerogative of the painter. A photographer might seek to represent his subject with honest exactitude. The painter, especially the wildlife painter, seeks to shape his subject to maximize its beauty or dramatic impact.

“I always try to get something a little more out of a painting,” he said.

Pasqua is the 2019 Southeast Wildlife Exposition’s featured artist. His painting “Little Havoc” is the image seen on SEWE’s poster and marketing materials. It will be auctioned at the VIP Preview Gala on Feb. 14.

SEWE, which runs Feb. 15-17, is a three-day celebration of wildlife and nature that features fine art, conservation education, sporting demonstrations and food and drink. It was launched in 1983 and now is the largest event of its kind, drawing around 40,000 people.

Each year, organizers identify a featured artist, and they try to mix it up, according to SEWE Art Curator Natalie Henderson.

“We have an anonymous jury that does the selection process for featured artists,” Henderson said. “We make selection one or two years in advance.”

That gives the artist enough time to create original works for exhibition. Pasqua was invited to be the 2019 featured artist two years ago, Henderson said.

“When we are considering our featured artists, we want to make sure … from year to year there’s really a significant difference, something distinctive about each artist,” she said. “Not just style, but subject matter is important. So Lou really stood out to us because his sporting art is unmatched. He has a rich old-world quality about his work. We haven’t had the sporting dog as a featured image in decades. We really feel like we’re going back to our roots with a traditional sporting art piece.”

“One of the most unique things about our show is we represent wildlife artists from all over world,” Henderson said. And most of these artists make images that represent the places where they live.

That ensures huge variety. Painting of the American West will differ radically from paintings of South African game or birds along the Charleston seashore.

Paderewski said his gallery represents several of SEWE's past featured artists. Pasqua's work is particularly popular. His first piece sold at the gallery in 2004.

"We've done a lot of commissions over the years with him," Paderewski said. "Lou is at a point where he is really wanting ... to pull back the reins, do a little more of what he wants to do, when he wants to do it. That’s when you get the best art."

"You’ll see some loose brushwork throughout the foreground and background," he said of the artist's impressionistic approach. "He produces higher detail in certain aspects, as need be, to emphasize his primary subject. He, like any quality artist, is going to, unbeknownst to the viewer, designate what to look at, how to look at it. ... He is capturing a moment in time that resonates with the hunter, whether it’s peaceful and serene or whether it’s very intense."

Pasqua said he worked as a graphic designer for 20 years before turning to wildlife painting. He learned his technique more by practicing than by studying with mentors and masters. He’s always loved animals and the outdoors.

When he started painting seriously, he had a family to support and not a lot of disposable income. He couldn’t travel to the mountains of Alaska or the African Serengeti or the Brazilian rain forest. So the Pittsburgh-based artist looked for his subjects close to home, and quickly fell in love with portraying the dynamism of dogs.

“Dogs are always available,” he said. Unlike giraffes and lions and orangutans.

And for Pasqua, there’s a big upside to painting dogs, he said.

“I get to meet some really interesting people: Dog owners and breeders are so passionate about their dogs. I just meet the nicest, unique people.”

Pasqua said five of the 20 paintings he is bringing to Charleston and exhibiting at the Charleston Place Hotel already are claimed, and the featured image will be auctioned off, so that’s accounted for, too.

“It’s a good feeling knowing that I’ve already sold about a quarter of my show pieces,” he said. “I’ll have enough money to make it home to Pittsburgh.”