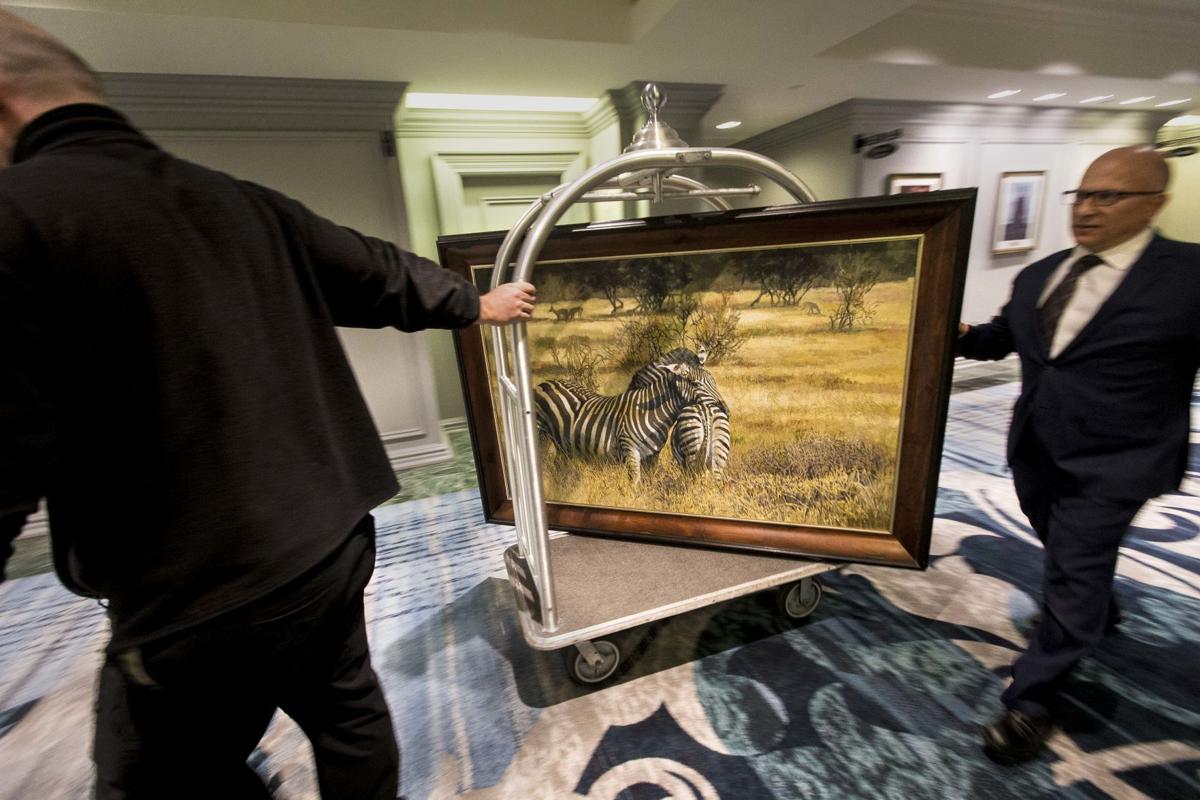 Artwork for the Southeastern Wildlife Exposition is rolled down the hallways toward the Charleston Place ballroom on Wednesday, Feb. 13, 2019, in Charleston. File/Andrew J. Whitaker/Staff 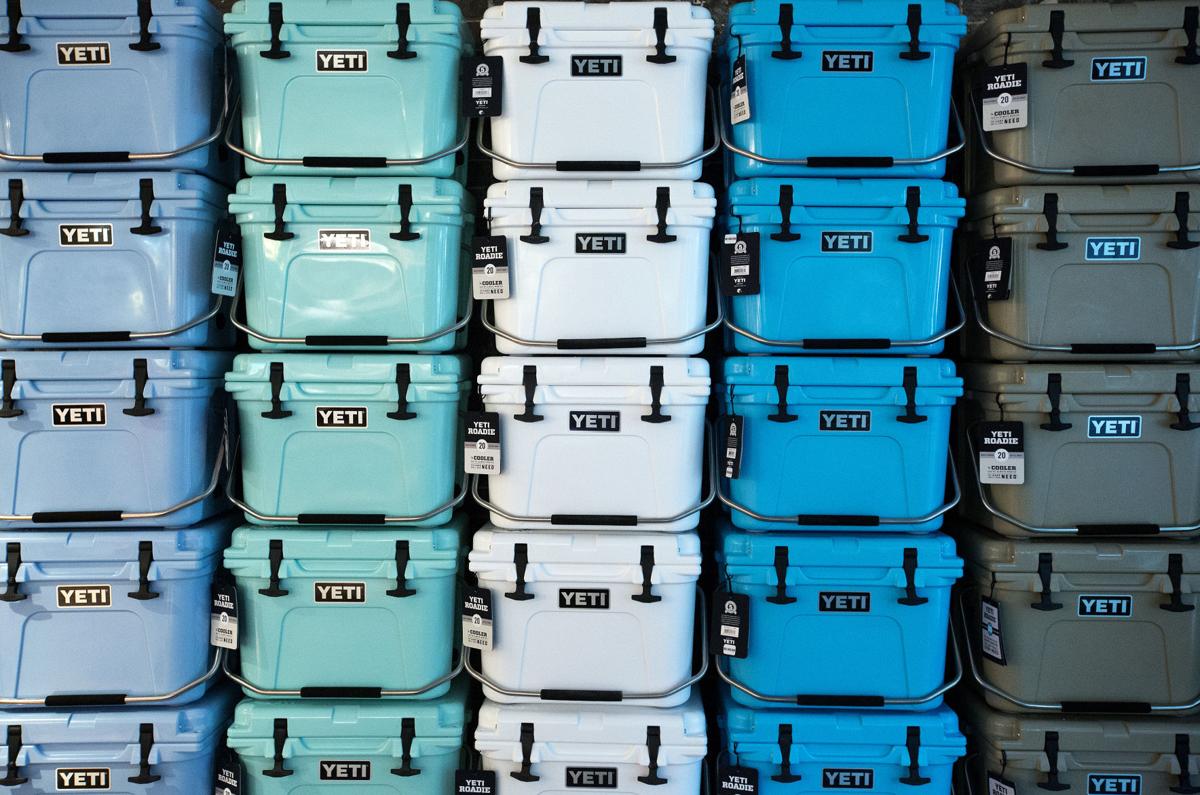 Coolers are stacked high at the Yeti store on King Street in downtown Charleston. This year, Yeti is again participating as a sponsor in the Southeastern Wildlife Exhibition. File/Grace Beahm Alford/Staff

The Southeastern Wildlife Exposition is the unofficial season opener for Charleston's visitor industry.

Now in its 38th year, the three-day event remains a heavy hitter, generating tens of millions in economic impact and drawing support from many of the region's top businesses.

SEWE is strategically scheduled for this time of year, said Executive Director John Powell. The event brings more than 40,000 people to the peninsula over one weekend, during a month that's traditionally not popular with visitors.

"Having these events really helps the industry at a time that not many people are traveling," said Daniel Guttentag, director at the College of Charleston's Office of Tourism Analysis.

Hotel occupancy rates in the Charleston area usually outpace those on the state and national levels, but the difference is particularly pronounced during February.

About 74 percent of Charleston County hotel rooms were occupied during February last year. Hotels statewide only filled about 58 percent of their rooms that month, and occupancy rates for the entire U.S. were just over 62 percent.

The week before SEWE, occupancy rates tend to be just below 70 percent. The weekend of the event, those rates jump by more than 20 percent to a figure in the mid '90s, Guttentag said.

The increase in Charleston-area hotel bookings in February compared to January is second only to the jump in room nights sold between February and March, when the Charleston Wine +Food Festival acts as the main draw.

In addition to hosting out-of-town festival-goers, Charleston hotels are among the flagship locations for SEWE's events.

The main attraction — the fine art gallery where work by hundreds of featured artists is displayed — is set up every year at the Belmond Charleston Place Hotel, and the Marriott Hotel on Lockwood Boulevard hosts Boston-based Copley Fine Art Auctions for its winter sale.

Events will also bring attendees to Marion Square, Brittlebank Park, the Gaillard Center, and multiple library branches around Charleston County, extending as far from the peninsula as McClellanville.

Visitor spending ripples out from all of those locations, as attendees book hotel rooms on and off the peninsula, dine out and make purchases at local retail stores.

In all, the event generated about $16.4 million in direct visitor spending last year.

For general admission ticket holders, the weekend's events start on Friday, Feb. 14, and close Sunday, Feb. 16. But, for some guests, festivities will begin as early as Wednesday with a separately ticketed opening party, and VIP events start on Thursday.

VIP ticket holders don't just spend more on admission, according to a survey of last year's attendees who stayed overnight. The survey showed that VIP guests spent more than three times more per person while they were in town.

This year's VIP program sold out in December, Powell said, and advance general admission ticket sales are outpacing last year's. More than 40,000 people are expected to buy tickets, which is in line with last year's attendance estimates.

While the event has seen ticket sales swell dramatically from its first event in 1983 to the present, they're not necessarily looking to expand attendance at this point, Powell said.

The emphasis now is on "tweaks and enhancements" that keep each iteration of SEWE fresh, he said, and growing partnerships rather than growing the event itself.

"We very rarely lose partnerships," Powell said. "Once they're on, they're on for life."

While retaining partners like Boeing and Baker Motor Co., SEWE has been able to bring in new sponsoring companies or upgrade existing sponsors' participation.

This year, for example, the sporting goods retailer Orvis is participating as a corporate sponsor. The retailer plans to offer complimentary fly-fishing casting lessons in front of the Gaillard Center all weekend and co-host retriever demonstrations at Brittlebank Park.

Orvis recently established a brick-and-mortar presence in downtown Charleston. The company opened its store on upper King Street last spring and is enticing SEWE attendees to shop there over the event weekend by offering a discount for ticket holders.

Like Orvis, the outdoor brand Yeti also recently opened a store on the peninsula. About six months before its King Street shop opened in September of last year, Yeti sponsored a SEWE event where artists painted wildlife scenes on coolers.

Yeti is participating as a sponsor again this year.

The outdoor apparel brands Huk and Nomad, which are based in Charleston, are also among the recent additions to SEWE's sponsorship program, Powell said.

Maintaining a mix of local businesses and nationally known brands has been important for SEWE as it grows its sponsorship pool, Powell said.

Similarly, Powell said, they also hope that, while the event is a draw for visitors from across the country, people in the Charleston area will continue to take advantage of it, too.

"We really want locals to come out and see what we've created," he said.