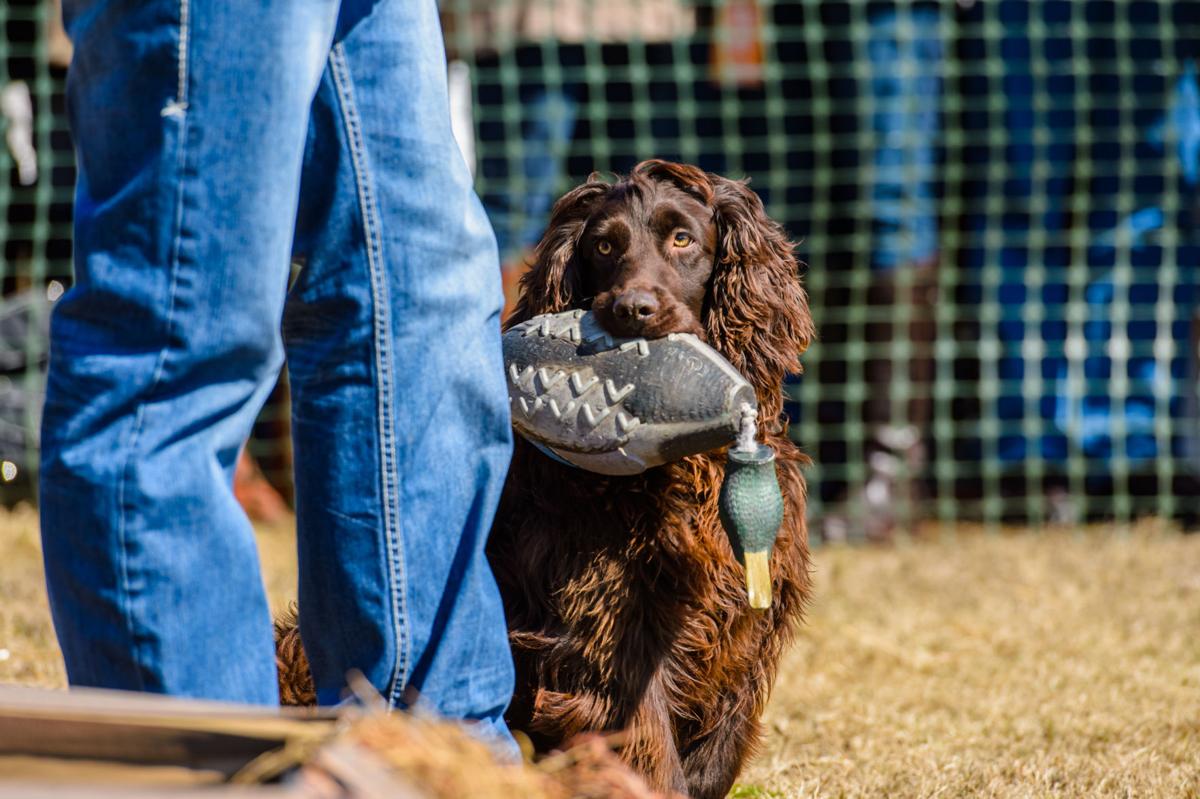 A focused Boykin spaniel holds a dummy in its mouth during a Retriever Demonstration at Brittlebank Park. 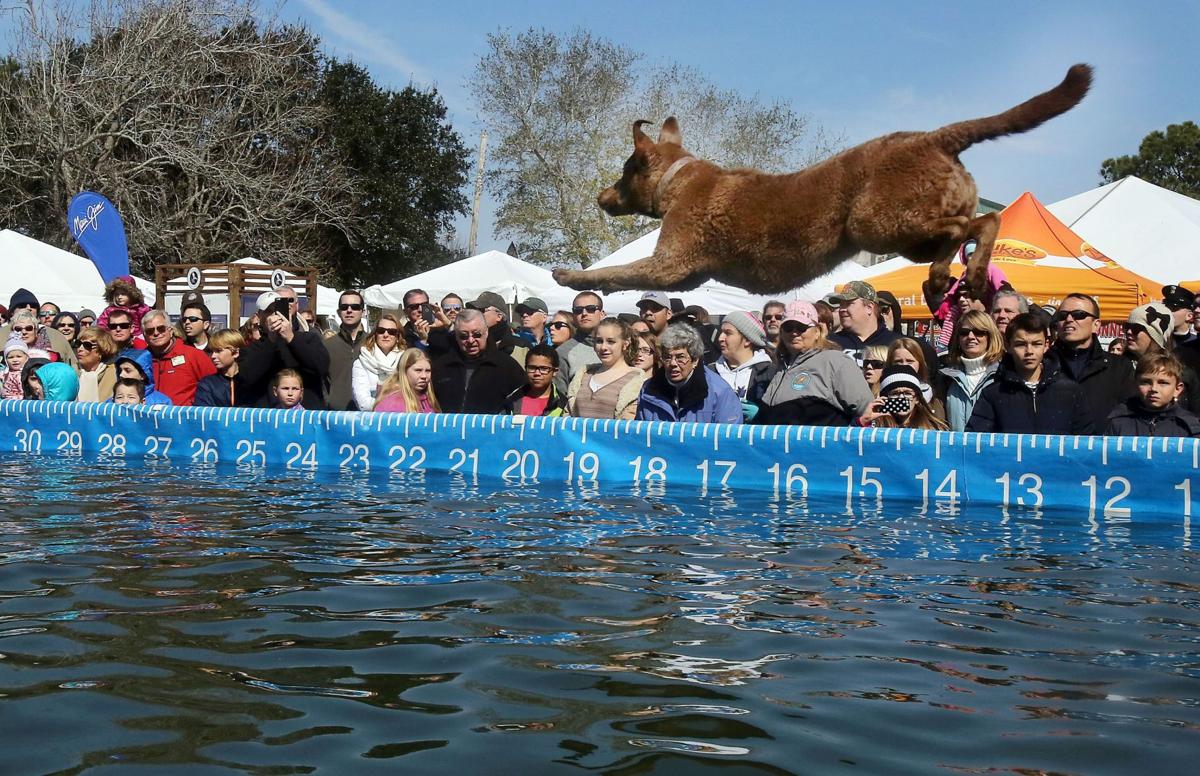 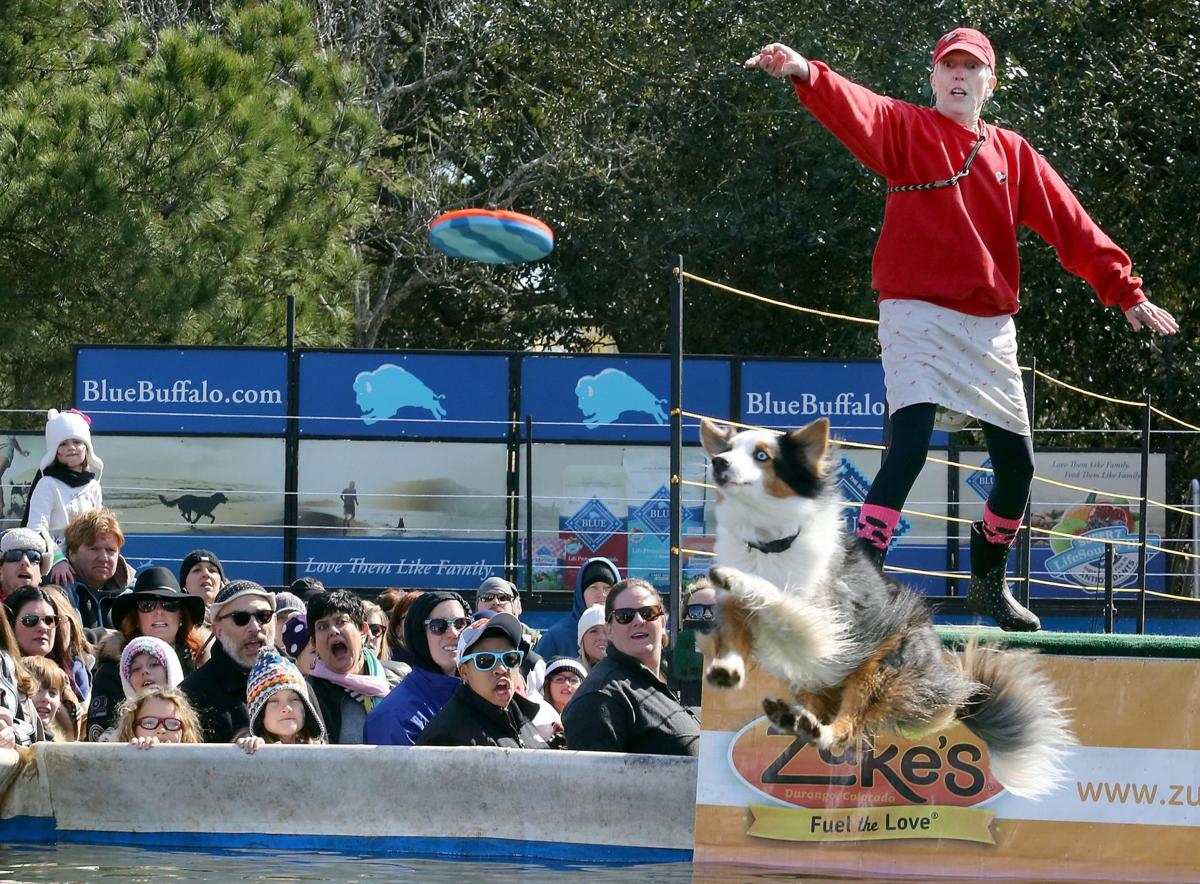 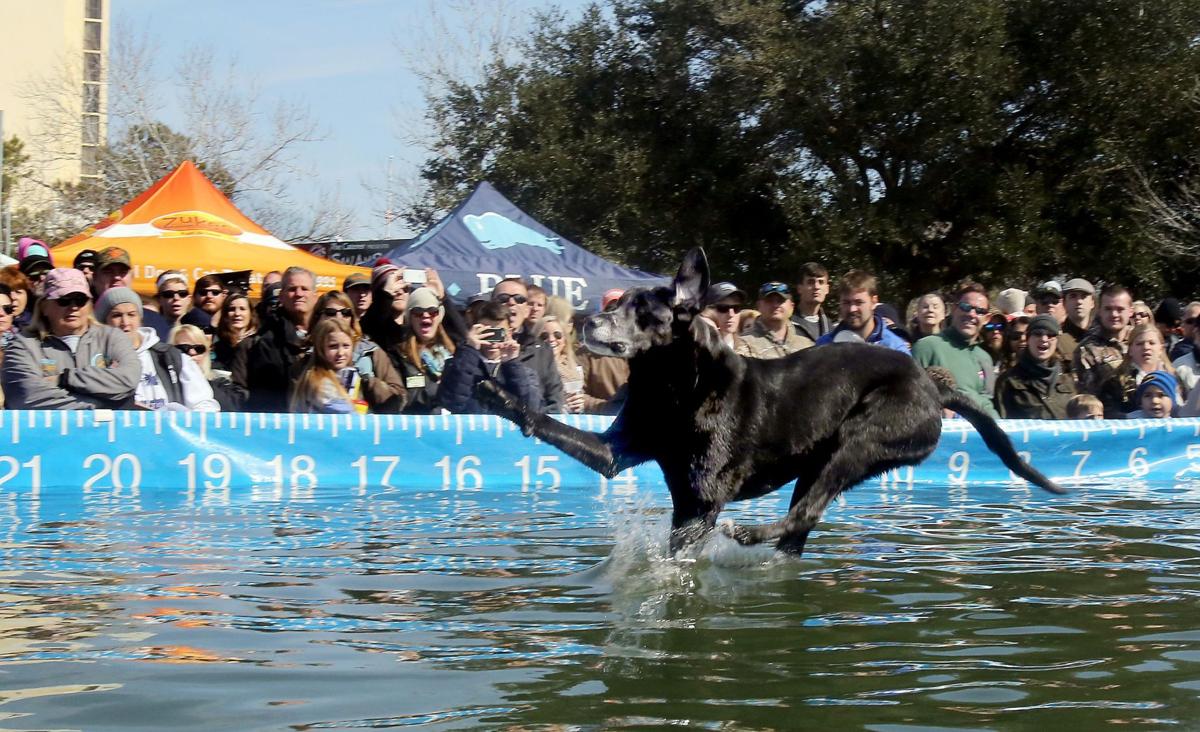 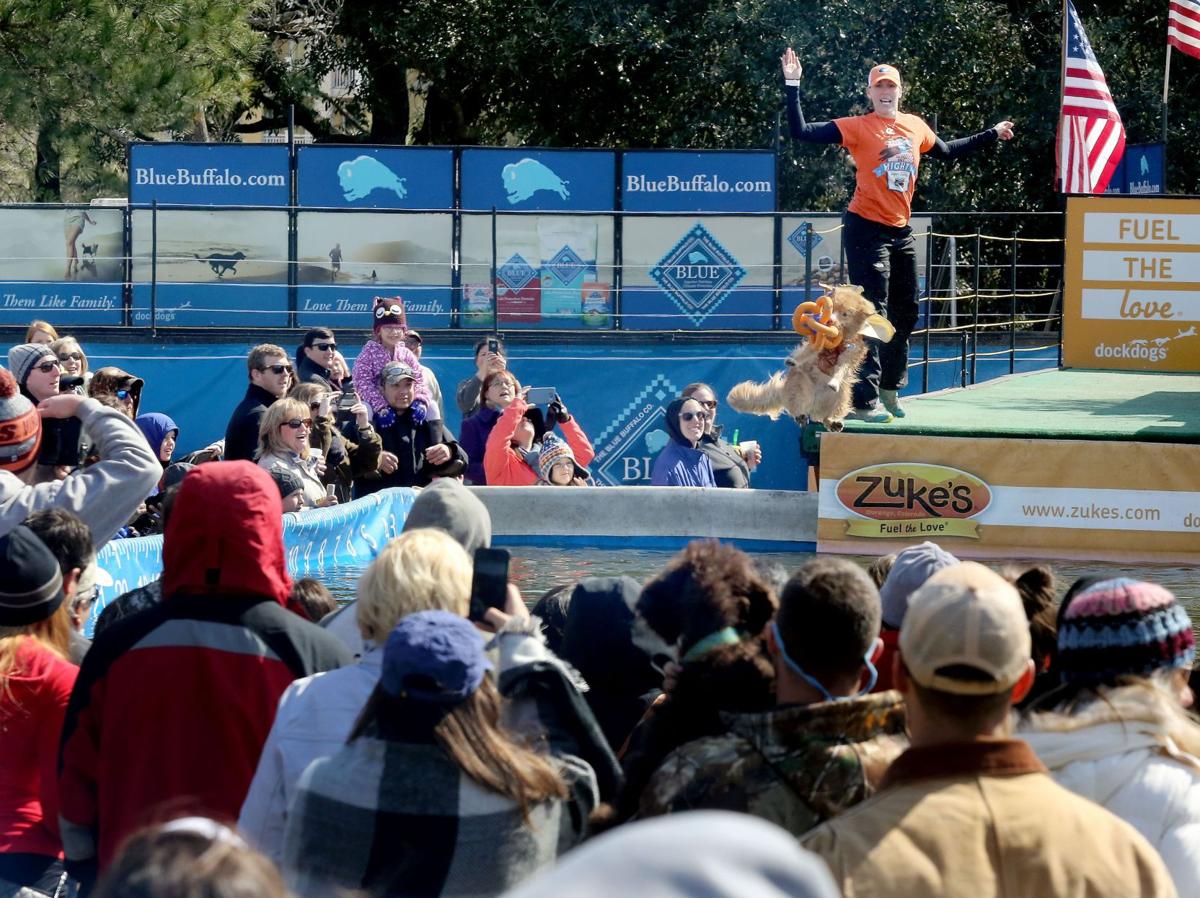 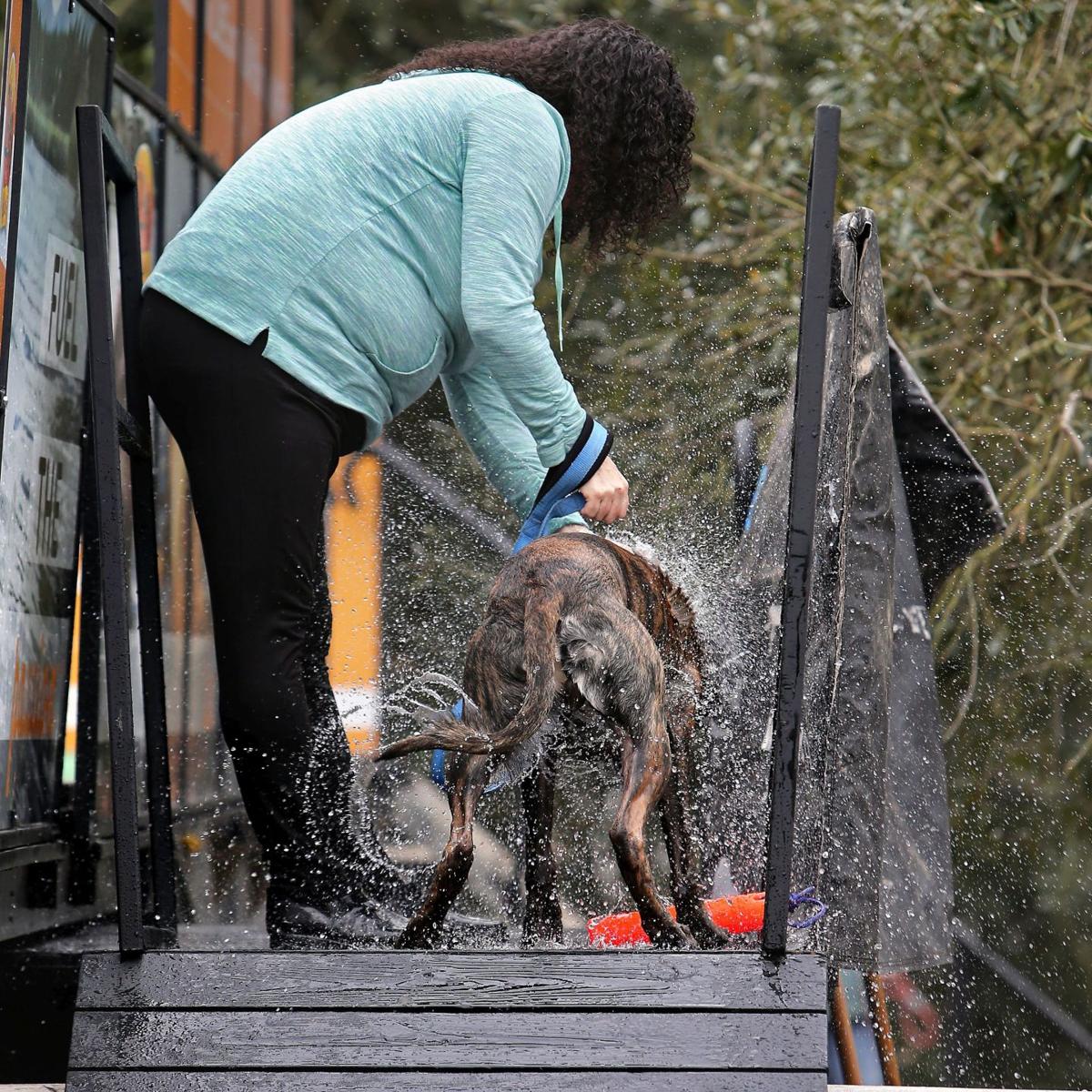 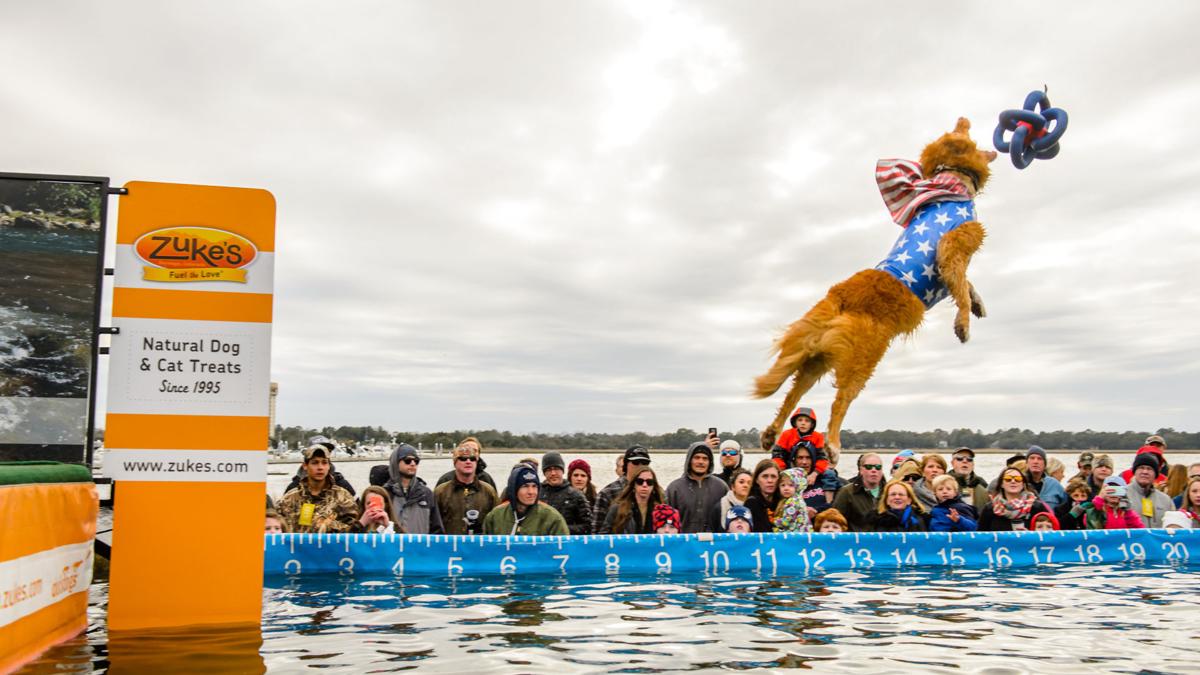 A dog displays great determination and form while competing in the DockDogs competition in 2016 at Brittlebank Park.

A focused Boykin spaniel holds a dummy in its mouth during a Retriever Demonstration at Brittlebank Park.

A dog displays great determination and form while competing in the DockDogs competition in 2016 at Brittlebank Park.

If you are looking for a doggone good time during the Southeastern Wildlife Exposition, Brittlebank Park unquestionably is the place to be. Retriever demonstrations on one end and DockDog competitions on the other guarantee good times for dog lovers throughout expo hours.

“DockDogs anchor the east end and we anchor the west end,” says Bill Crites, who helps oversee the retriever demonstrations that have been a popular part of the show through most of its 35-year history.

Crites, who owns Lily Pad Boykins in Blythewood and is a board member of the Boykin Spaniel Society (boykinspaniel.org), said South Carolina’s state dog is an important part of the retriever demos but not, by any means, the only retriever breed that will participate.

“I work with friends in different retriever clubs to bring their dogs,” he said, explaining that in addition to Boykins there will be Labrador retrievers, Chesapeake Bay retrievers, golden retrievers, American water spaniels, Weimaraners, even some German wirehairs.

The retriever exhibits begin with a parade and explanation of the participating breeds. That is followed by retrieving demonstrations by puppies and polished retrievers that demonstrate their talent at finding and retrieving training dummies, at the direction of their handlers by hand or whistle signals.

Spectators crowd three and four deep, often numbering around 400, around the grounds to watch the demos.

Crites acknowledges that all the breeds have their strengths, but he is partial to the Boykin Spaniel, which was designated as South Carolina’s state dog in 1985. The chocolate brown, curly haired dogs weigh from 25 to 40 pounds.

The Boykin Spaniel was first bred during the early 1900s to provide the ideal dog for hunting ducks and wild turkeys in the Wateree River Swamp. According to legend, the precursor of the Boykin breed was a stray found by Alexander White, who was walking home from church. The dog showed a talent for retrieving and White sent it to his friend and hunting partner, Whit Boykin in Camden, for training. Other ancestors are reported to be Chesapeake Bay retrievers, springer spaniels, cocker spaniels and the American water spaniel.

“I bought my first Boykin for my then-girlfriend and now wife. It must have worked because she said yes,” said Crites, who now has five Boykins.

“People call them pocket retrievers because of their size. They are perfect companions, going with you into the field and then coming home and settling in your lap.”

While the smaller breeds of retrievers might be perfect lap dogs, you probably won’t want to have your DockDog jump into your lap immediately following a competition.

DockDogs (dockdogs.com) come in all sizes and breeds. When their handler gives them the command, the dogs charge down a 40-foot dock and leap after a rubber bumper before splashing into one of two 30,000-gallon tanks of water. They compete in three disciplines: Big Air (compare it to long jumping), Extreme Vertical (high jumping) and Speed Retrieve.

DockDogs began in the U.S. in 2000 as part of ESPN’s Great Outdoor Games. It is open to all breeds, although larger water dogs such as Labrador retrievers are among the most popular species. The only rule is that the dog must be at least six months old.

In the 10 years it has been part of SEWE, DockDogs has become one of the most popular events with several hundred dogs from throughout the Southeast expected to participate. They compete in 40-dog waves with the finals scheduled at 4 p.m. Sunday.

“This is the only national DockDog competition we have here in South Carolina,” said Deb Feller of Charleston, who is president of Palmetto DockDogs (palmettodockdogs.com). “It’s also the only DockDog competition east of the Mississippi that has two tanks. The only other event spectator-wise that’s as big as SEWE is the GoPro Mountain Games held in June in Vail, Colorado.”

Feller said that the SEWE event’s reputation for putting on full 40-dog waves also makes it one of the premier DockDog competitions. Others, she said, might have only 30 to 35 dogs compete per wave.

It’s a family event for Feller and her life partner Laurie Uebelhoer, who have two dogs, Doni and Sirius, who have won and placed high in various national competitions.

“When you’re up on the dock with your dog, it’s fun. It gives you a rush,” Feller said. “You have so much fun with them and we’ve met so many great people through DockDogs.”