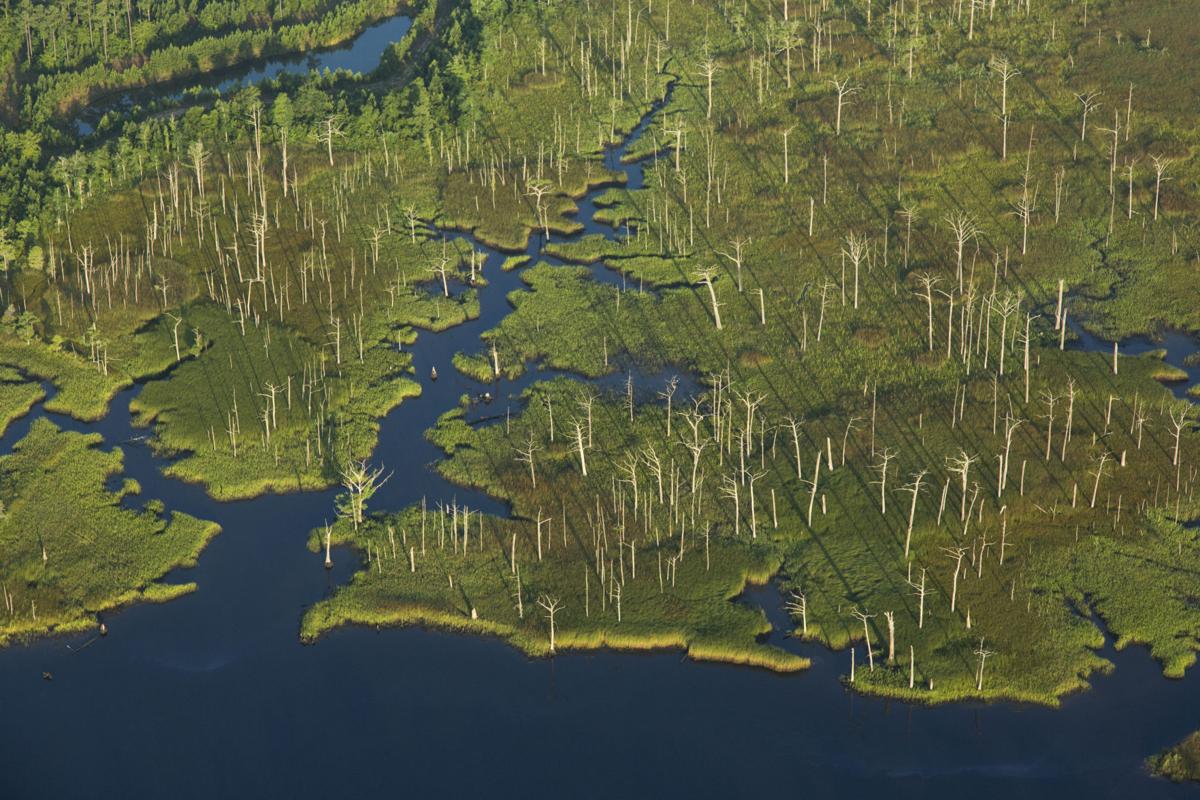 Aerial view of the Sampit River in South Carolina. As saltwater encroaches due to rising sea levels and climate change, the vast cypress forests have been ravaged by high salinity, leaving only skeletons of a once thriving freshwater system. Mac Stone/Provided 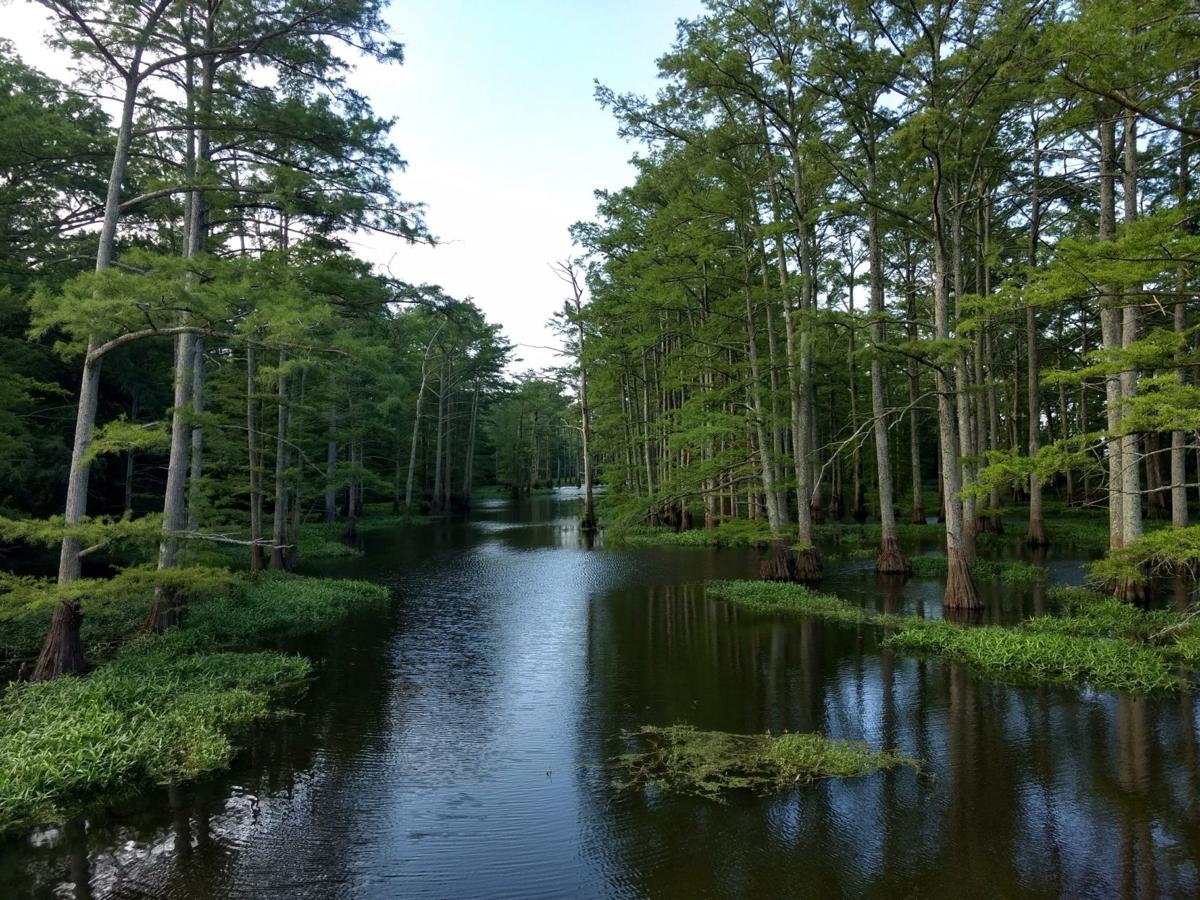 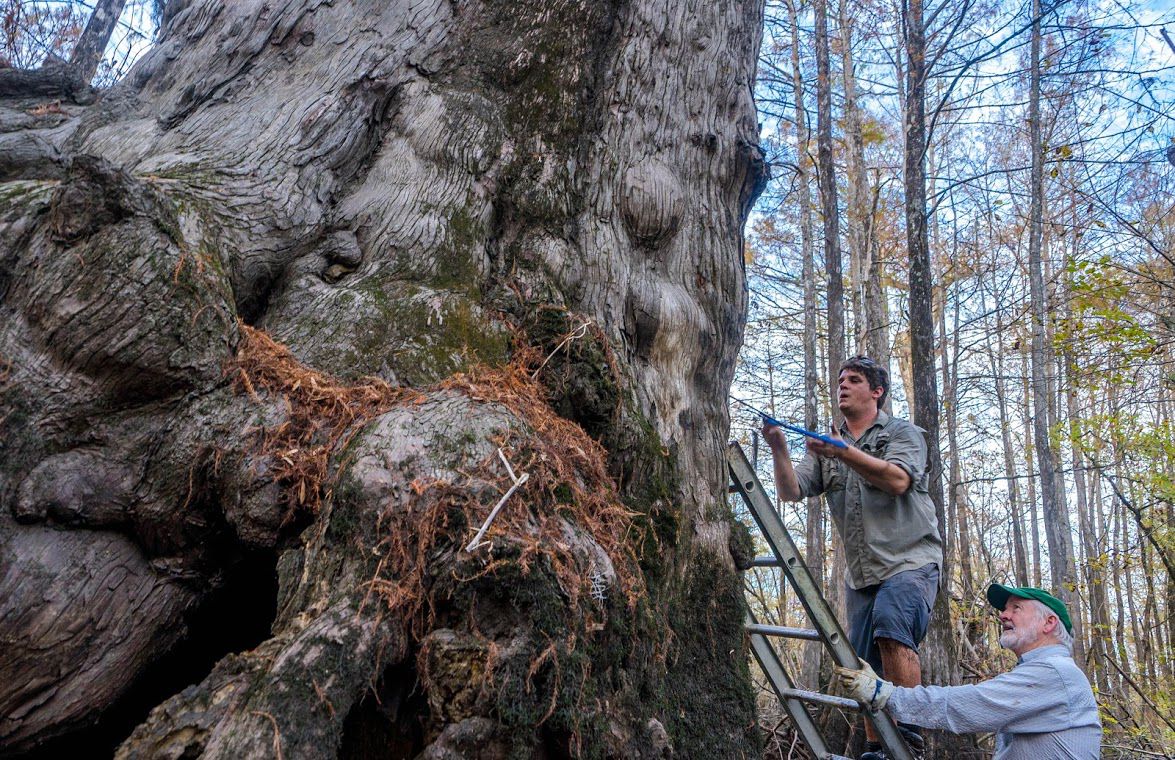 The Ancient Bald Cypress Consortium isn't identifying exactly which cypress in its Black River Preserve might be the oldest tree in eastern North America. But the river is replete with huge old growth. Consortium member Jesse Edmondson is collecting a core specimen while David Stahle secures the ladder. Daniel Griffin/Provided

The oldest living tree in the eastern continent has stood for more than 2,000 years in a cypress swamp just over the North Carolina border.

Seventy miles to the south, young cypress trees are dying from salt intrusion on the Sampit River in Georgetown.

The contrast is just that stark between how the vibrant South Carolina coast looks today and how it could largely look not so far into the future — skeletal patches of drowning seascape and dying wetlands.

The outer barrier islands in the Cape Romain National Wildlife Refuge already are getting overrun by tides. The sand needed to create new islands and beaches has been blocked by lake dams, coastal groins and jetties.

The 400,000 or so acres of marsh in the South Carolina estuaries — the miles of sweeping grasses that are a vital water filter, the nursery of countless marine creatures — can be expected to be washed gradually to mud flats as seas rise and flooding worsens.

If only that were all.

Marshes along the Sampit River in Georgetown are just a small portion of the 400,000 or so acres of marsh expected to be ravaged by seas rise and flooding.

The South Carolina coast hosts an array of what are called biomes, landscape-scale communities of animals and plants that thrive because of each other. If the landscape goes, those plants and animals lose ground.

For one example, much of the shrimp could be lost if the flooding marshes can't reestablish farther inland in time.

The change is happening now, incrementally. Salt now intrudes up the Waccamaw River to Sandy Island, some 20 miles from the ocean. A few hundred acres of hardwood in pines are dying along Wando River waterways managed by Ryan Wentzel, of Sabine and Waters forestry consultants.

"We're getting such extreme tides the trees are just going underwater," he said. The issue isn't widespread yet among forestry holdings but it's one more stressor, he said.

Flooding low spots have widened since the 2015 flood. They will get worse. Trees that have splintered or tumbled over since the flood will become more common. More plants will die.

Between flooding and urbanization, as much as 35 percent of connected coastal habitat could be fragmented, a Clemson University study found. It would isolate and potentially wipe out in spots species such as frogs, salamanders or other amphibians that can't swim distances or have trouble in salt water, said Clemson conservation biologist Rob Baldwin, whose lab did the study.

They, in turn, would be food lost for other species.

Already swamped shorebird and sea turtle-nesting islands in Cape Romain, dying marshes in Coburg Creek in suburban Charleston, the dead cypress along the Sampit — they are all bellwethers of the future coast.

That gnarled old cypress in the Black River in North Carolina isn't an outlier. Massive cypress more than 1,000 years old are found all along the coast — on the Black River in South Carolina, in the Francis Marion National Forest. Ebeneezer Creek, just over the Georgia border, features clumps of them.

The coastal cypress reach as far inland as Francis Beidler Forest near Harleyville.

They are one of the awe-inspiring features of the environment, and one of those "canary in the coal mine" indicators of a threatened ecosystem.

The coastal ecosystem is in immediate jeopardy from flooding and sea rise, said Sarah Hartman, conservation director for the Nature Conservancy in South Carolina.

"It's going to affect everything from our barrier islands to our inland waterways. We're going to lose our marshes in some areas. On the rivers we're going to see more skeletons of trees," she said.

The conservancy and partners have protected more than 47,000 acres of South Carolina's Black River outside Andrews, including 10 miles of critical cypress bottoms. Staff sought the acreage specifically because of concerns that wildlife-rich cypress bottoms closer to the ocean were being lost.

"You see these skeletons of trees (along the Sampit) that were flourishing," Hartman said. "They are some of the most ancient natural systems we have in the state."

Farther up the coast, the 23,000-acre Waccamaw National Wildlife Refuge along the Waccamaw and Pee Dee rivers is embarking on a groundbreaking plan to literally reshape itself, giving up on some lands it had set out to acquire in 1997 and going after new ones upstream. The move is under way because the rare and beautiful swallow-tailed kite, one of the iconic species of cypress bottoms, is already moving nests from the refuge's bottoms.

The "boundary modification" plan is considered a model for how U.S. Fish and Wildlife Service refuges, as well as other conserved lands, will be managed in the future. The idea is to find room for species getting their habitat shifted by development and climate warming and sea rise.

It isn't just the birds. Deer, bear, snakes, alligators — everything eventually will move with the changing salinity as habitats and food move.

There's a little known fact about the ancient cypress forests that a totem of the coast: The seed can't germinate underwater.

"The trees need a dry period for an extended time to germinate, grow and survive subsequent flood events," said William H. Conner, a Clemson University professor who studies freshwater and saltwater wetlands at the Baruch Institute of Coastal Ecology and Forest Science in Georgetown.

Recently established cypress germinated in the droughts of the 1920s and 1960s. Newer trees came along in the drought from 1998 to 2002.

"We see trees growing out in the water along the rivers and bays because, as time has gone on, water levels have risen and lower elevations are now under water permanently or for extended times," Conner said.

But like other freshwater trees, cypress die out when there's too much salt in the water. They are now showing stress.

"Cypress is usually the last to go in these forests," Conner said.

The city has a front row view to the real-time impacts of climate change, and those impacts are just coming faster.