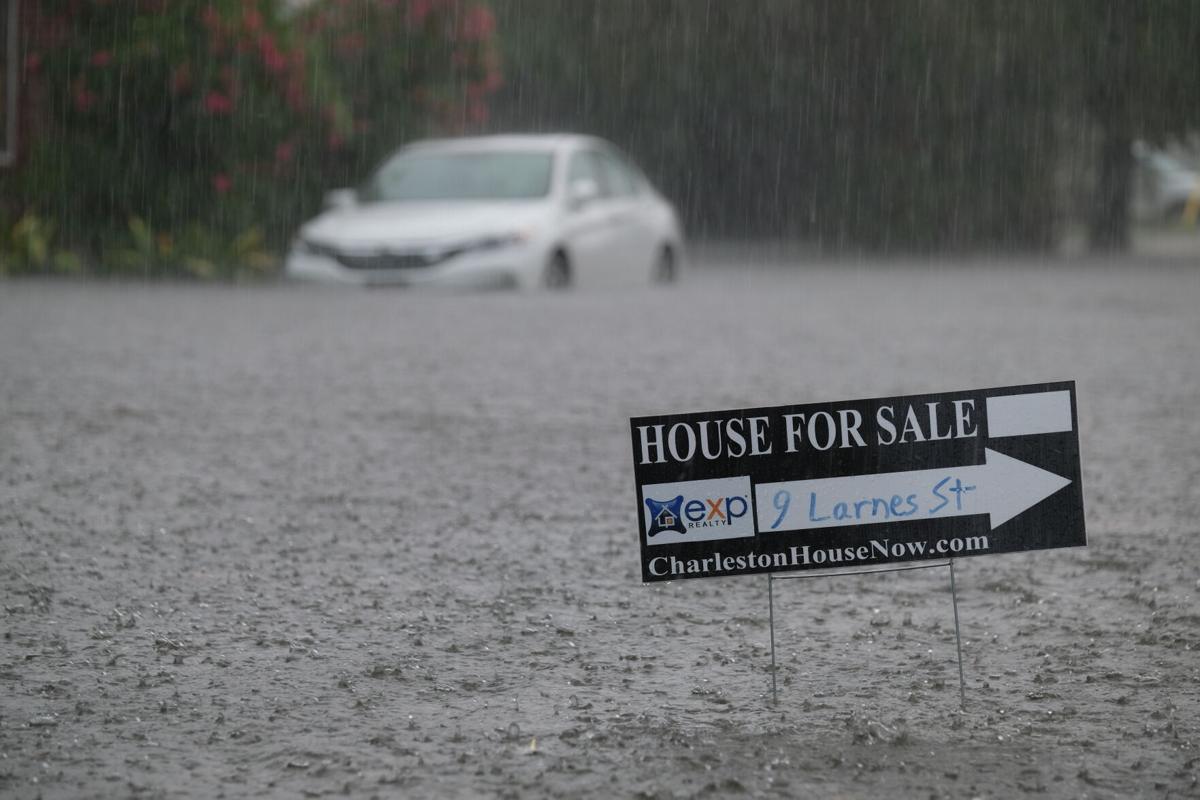 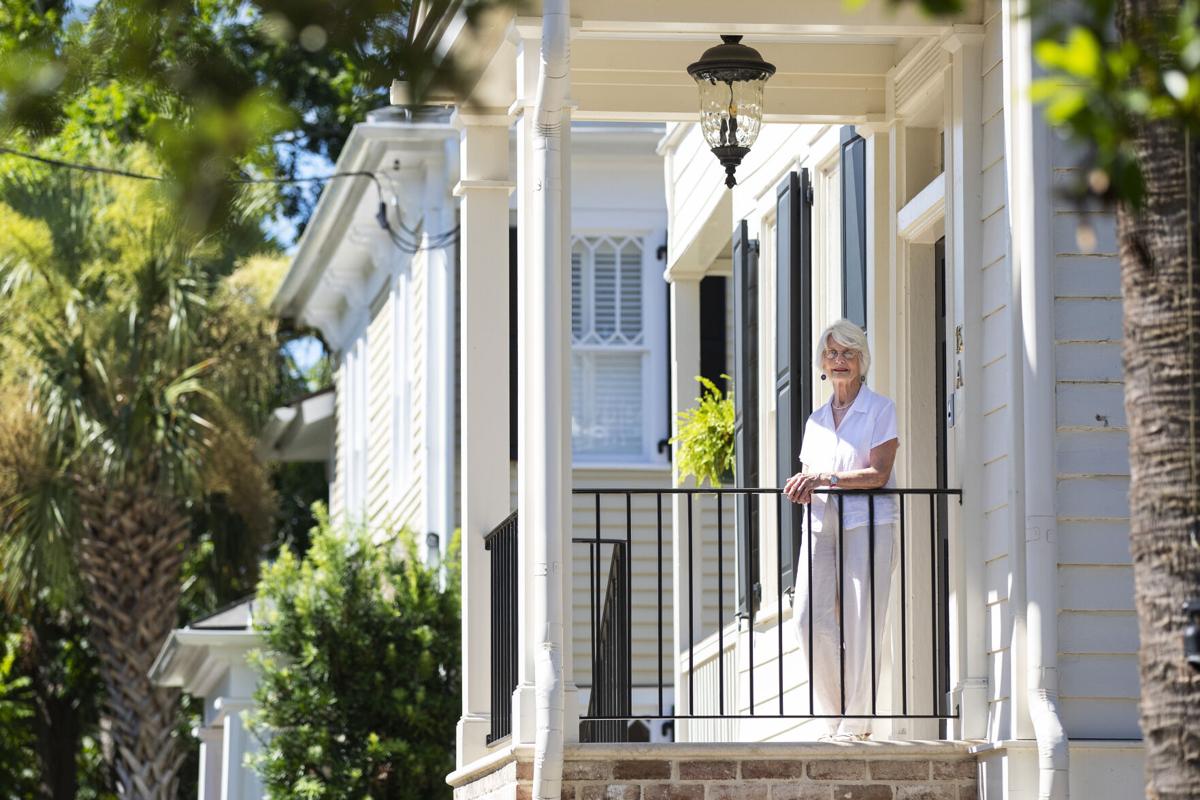 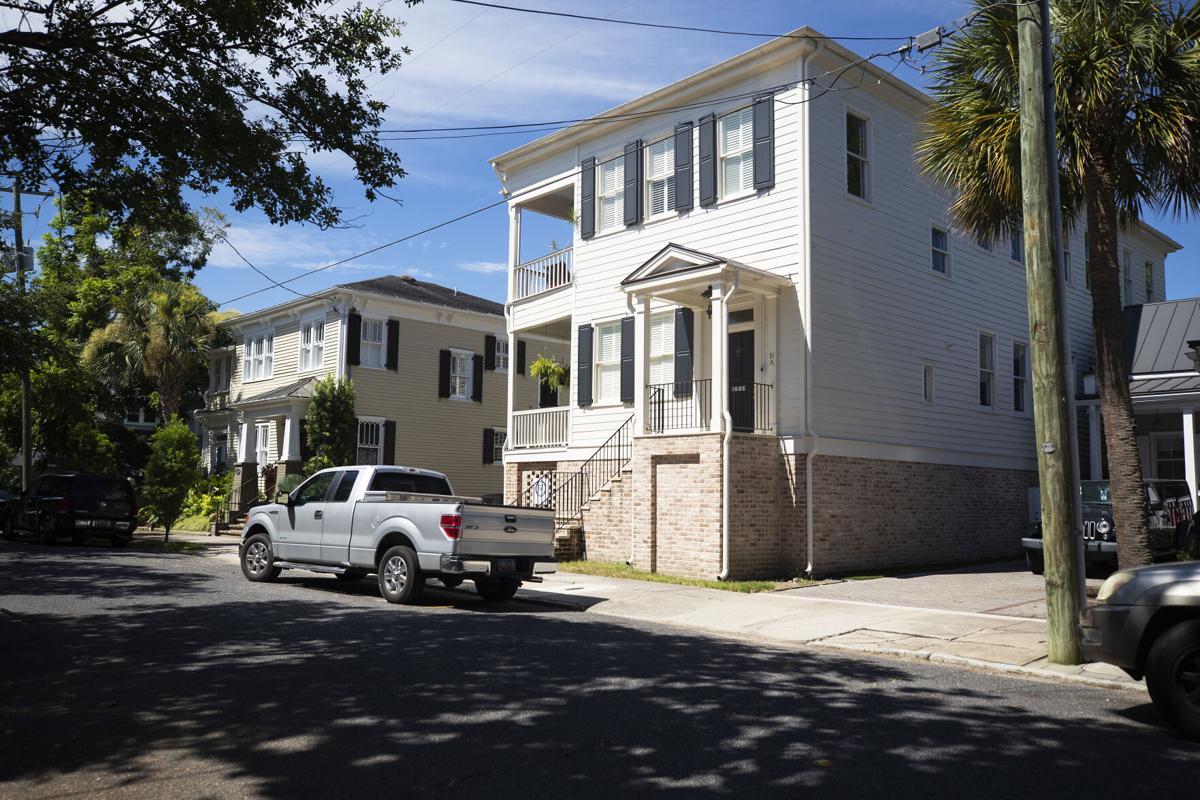 Margaret "Midge" Peery's home on Council Street in Charleston is shown in late July after she recently had it raised 7 feet because of flooding during Hurricane Irma in 2017. Lauren Petracca/Staff 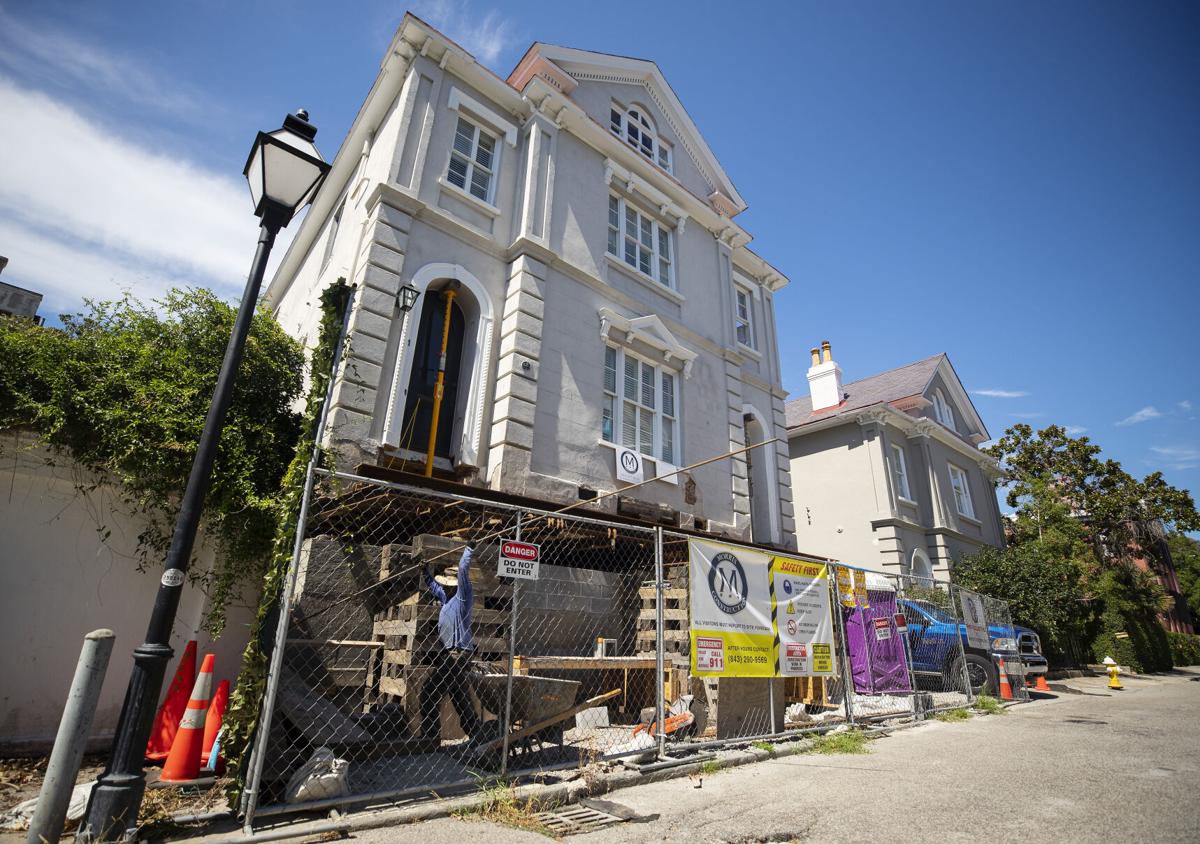 A home is elevated on Water Street in Charleston in late July. Lauren Petracca/Staff 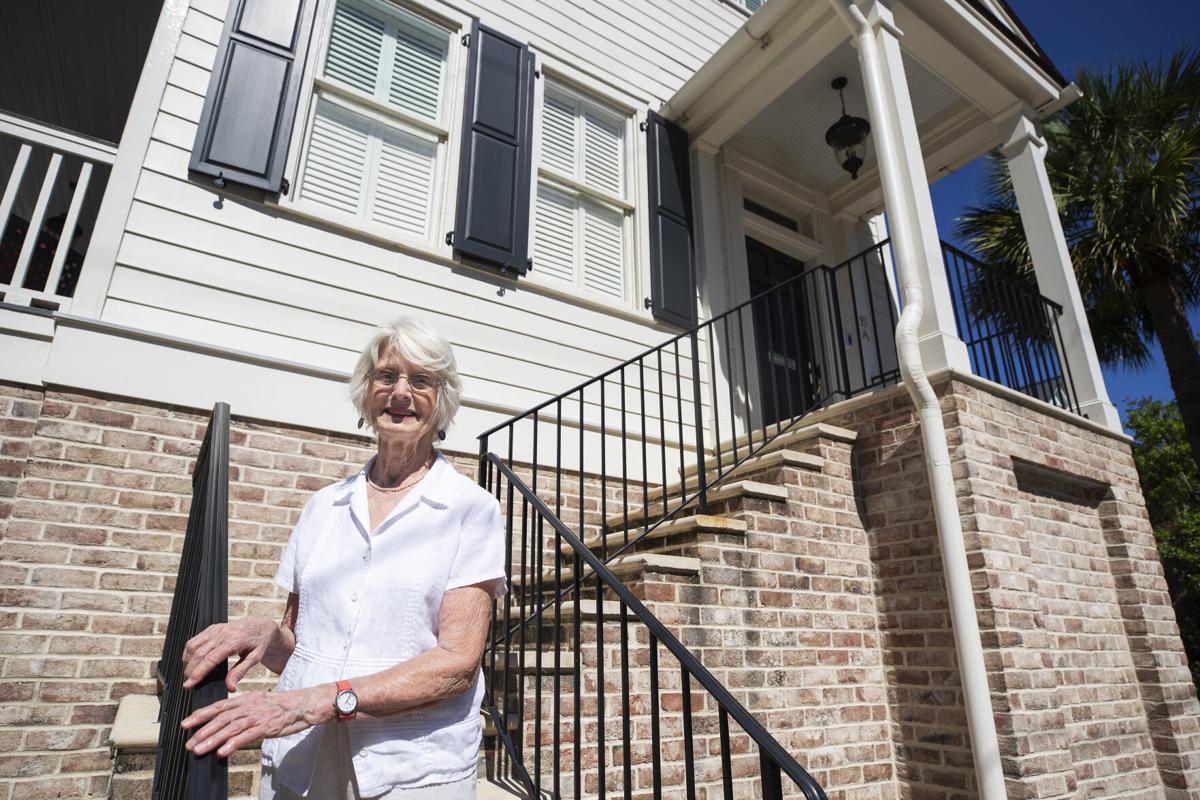 Margaret "Midge" Peery is pictured on her porch on Council Street in Charleston in late July. Peery had her home elevated after it flooded during Hurricane Irma in 2017. Lauren Petracca/Staff

Margaret "Midge" Peery is pictured on her porch on Council Street in Charleston in late July. Peery had her home elevated after it flooded during Hurricane Irma in 2017. Lauren Petracca/Staff

Rising sea levels brought on by climate change have led real estate agents to answer one question more than any other when prospective buyers start looking at homes in the Charleston area:

"Has the house ever flooded?"

The past five years have brought a succession of heavy rain bombs, surging tides and crippling floods that have swamped the Charleston region, inundating a host of properties with filthy water that leaves mold and destruction in its wake.

VIDEO: Climate change is speeding up

Many homes have been damaged multiple times; some have been torn down as a result. Others have narrowly escaped the water's grasp, but are on streets that become canals when it rains, swallowing cars whole and making even modest travel a dicey proposition.

Communities facing similar climate-driven challenges along the East Coast have seen their real estate markets take a hit, with repeat flooding driving down prices. That hasn't yet happened on a wide scale in Charleston, a top-end tourist destination that continues to draw new residents eager to partake in the region's beaches, fine dining and historic charm, real estate agents said.

But while the market remains robust, flooding presents a persistent threat as the sea rises around the city, storms increase in intensity and the popular peninsula sees tidal inundations that shut down roads on a regular basis.

So home-selling agents such as Helen Geer of William Means Real Estate end up hearing the same questions more and more.

The answers can erode the value of homes, from simple ranches to historic showpieces.

Geer, a Realtor, pointed to a house on Charleston's tony South Battery that sold in 2014 for nearly $4.9 million. Two years later, following a disastrous 1,000-year flood that drowned the peninsula, the home changed hands at a loss of nearly $800,000. It sold again in July for roughly the same price from four years ago — $4.1 million.

"The pricing depends on the location," Geer said. "If you are in an area that has flooded, the pricing will be less."

Some residents, including Margaret "Midge" Peery, have chosen to raise their homes to get them out of the water's reach and protect their value. Peery spent $450,000 to elevate her Council Street home after Hurricane Irma flooded the house in 2017.

"I either had to sell it or elevate it," she said. "And who would buy a house that had been demolished on the inside and had flooded?"

But not everyone can afford to undertake such a project, leaving hundreds of homes in harm's way. With scientists predicting the region's flooding problems to increase in intensity and frequency in the decades to come, will those homes continue to hold their value over time?

Elizabeth Boineau knows about the perils of flooding firsthand.

In 1997, she bought a 1929-era house on Beaufain Street, which runs across the peninsula and sits close to some of the city's most popular restaurants and attractions. She expected to live there for decades to come.

But after three floods in four years from 2015 to 2018, and the extensive, expensive, time-consuming restoration and reconstruction efforts that followed, she wanted out.

Boineau tried to sell the home by dropping the price 11 times. She was unsuccessful. Once appraised at just under $1 million, her home's value plunged to about half of that because of flooding.

Eventually, she sold it to someone from out of town, but the buyer didn't want the house. He wanted the lot to build a climate-proof house, and he wanted Boineau to tear the house down at her expense.

After reams of paperwork and a grant from FEMA, Boineau's house met the wrecking ball in 2018.

So far, real estate agents said they haven't seen horror stories like Boineau's scare off buyers or depress the local housing market, be it in downtown Charleston or out in the city's suburbs.

Throughout the Charleston region as a whole, home prices appreciated at 6 percent, higher than the 4 percent rate across South Carolina, Dix said. On the peninsula, prices are up 1-2 percent.

"On a million-dollar home, that's a pretty good return," he said.

Concern over flooding among house hunters can ebb and flow along with the immediacy of the threat. After years of getting pummeled by storms, Charleston caught a bit of a break this hurricane season. And the coronavirus pandemic, a turbulent election year and a season of nationwide protests has channeled attention and anxieties in other directions.

"I am finding that people are not as weary of flooding as they were at this time last year," Geer, of William Means, said during the hurricane season of 2020. "If they can get a house at a fair price, they will take it."

That doesn't surprise Dr. Von Bakanic, a social psychologist at the College of Charleston. Issues slip from the forefront of people's minds if the people they hang out with aren't talking about those topics. And the further they get away from a significant flooding event, like Irma or Matthew, the more their concern wavers — even when the threats remain very real, she said.

"We do have short memories, so we keep making the same mistakes," she said.

Still, one need only look to other similarly challenged spots along the East Coast to see the potential for flooding to impact real estate sales.

In Florida, two-thirds of the Sunshine State's nearly 22 million people live in counties that border the coast, and 10 percent live at an elevation less than 5 feet above sea level.

Coastal flooding in Florida fueled by climate change and rising sea levels has already caused overall real estate values to drop by an estimated $5 billion, and that number could rise as high as $80 billion in the next 30 years, according to a new report from McKinsey Global Institute.

Another new report, from the National Bureau of Economic Research, found that the volume of homes sales fell 16 to 20 percent since 2013 in those areas of Florida that are most vulnerable to sea-level rise.

Norfolk, Va., is facing a similar threat, according to a report in the Virginian-Pilot.

With more than 1,000 properties at risk, the city in the water-rich Hampton Roads area is already grappling with the realization that real estate values may be dropping because of flooding.

To protect their investments, some Charleston homeowners, like Peery, have begun raising their houses.

Since 2017, 49 homeowners have asked the city for permission to elevate their homes. Almost all have been approved or are under consideration by the Board of Architectural Review, according to the city's planning department.

Elevating houses is "an ebb-and-flow thing," according to Mike Brovont, sales manager at Pennsylvania-based Wolff Movers. That's the same company that oversaw the lifting of Peery's house and a dozen or so others over the past few years in the Charleston area.

"Any time you have a major event … you will have a big spike and then it drops off a couple of years after that," Brovont said.

He couldn't speak to the effect on home prices by elevating a house, but he said the lift comes with other positives.

"The value that I hear from the client is that they no longer have to worry when a flood comes through," Brovont said. "Also, flood insurance can drop, too, when you get out of a flood plain."

Elevating her home wasn't on Peery's radar at all when she bought her place on Council Street, in the swank South of Broad section of Charleston. She was well aware of Charleston's water woes, coming from another neighborhood where flooding was an issue, so she made sure to check the history on the Council Street home.

The house had not flooded during the thousand-year event in 2015, but she knew it had taken on water during Hurricane Hugo in 1989. It had a small claim with Hurricane Matthew in 2016, but she saw no sign water had made its way into the house.

"We thought we would be all right," Peery said.

Peery bought the two-story, 4,000-square-foot house in April 2017 for just over $1 million and promptly began to strip out the insides for a makeover.

Then, in September of that year, Hurricane Irma swept in a 10-foot tide, its winds pounding waves over The Battery sea wall and sending water coursing through the historic district.

Peery walked into her recently purchased street-level house after the punishing storm to find debris scattered across the floor and a water line about 6 inches up the walls.

"Everything else had been removed, but the appliances were still there," she said. "They were ruined and had to be replaced along with the cabinets."

At that point, she had to make a decision.

With the house already under renovation, she decided to forge ahead with raising the structure.

After several months, she installed a driveway, a patio and a brick wall separating the front yard from the backyard.

"Even without plants, it looks a million times better than before," Peery said.

Peery hasn't had her house reappraised since she raised it, but she believes it has raised the value.

"Whether it's increased the value beyond the expense, I don't know," she said. "But my flood insurance premium has come way down."

Peery hasn't seen any flooding in front of her new house during recent heavy downpours or above-normal high tides. But having the first floor of her house 7 feet off the ground gives her peace of mind when it rains hard.

"Now, I can enjoy a rainstorm without worrying so much," Peery said. "I can stay home and drink a cup of hot chocolate or read a good book if it's a rainy day."

VIDEO: Climate change is speeding up