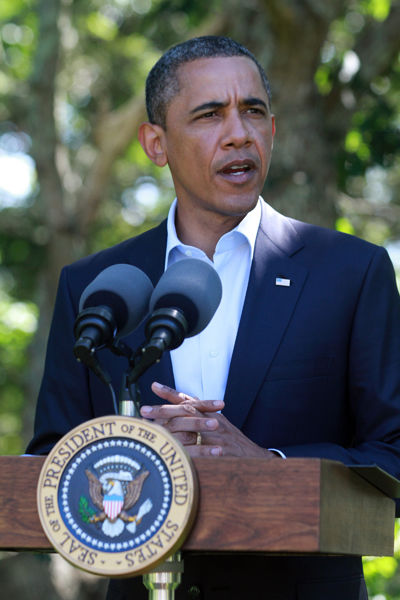 President Barack Obama holds a press conference about Libya at his vacation home on Blue Heron Farm in Chilmark, Massachusetts on Monday. 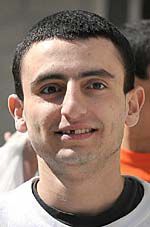 President Barack Obama holds a press conference about Libya at his vacation home on Blue Heron Farm in Chilmark, Massachusetts on Monday.

CAIRO — President Barack Obama called Monday for a “peaceful, inclusive and just” transition in Libya, telling rebels that “the Libya that you deserve is within your reach” as they battled to clear Moammar Gadhafi’s supporters from Tripoli.

“For over four decades, the Libyan people had lived under the rule of a tyrant who denied them their most basic human rights,” Obama said. “Now the celebrations that we’ve seen in the streets of Libya show that the pursuit of human dignity is far stronger than any dictator.”

Fierce fighting continued in some areas of the country, however, and Obama warned that the situation “is still very fluid.” The six-month fight, aided by a NATO-led coalition, turned in favor of the rebels only in the past two weeks, and took far longer than the Arab Spring revolutions in neighboring Egypt and Tunisia.

Residents of Tripoli said there were clashes between rebels and pro-Gadhafi holdouts at the longtime ruler’s Bab al-Azizya compound. But the rest of the capital appeared to be firmly in opposition hands as rebels and volunteers set up checkpoints, deployedg civilian patrols and secured buildings.

“The revolutionaries are very organized and are taking full control of the capital,” said a resident of central Tripoli named Reda, who was too afraid of reprisals by Gadhafi to give his full name.

In a sign that some Gadhafi supporters could continue fighting, residents of Zuwara, a town west of Tripoli and about 30 miles from the Tunisian border, reported heavy shelling from three nearby towns believed to be loyal to the longtime ruler.

Anees al Fonas, a member of the rebel media council from Zuwara who spoke by phone from Tunisia, said rockets and mortars had been fired “for the last 24 hours, nonstop,” from the nearby towns of Zolton, Riqdalin and Al Jamil. A civilian was killed Monday when a rocket landed on the roof of his house, and four others were injured, Fonas said.

A small group of rebels was on the outskirts of Zuwara, but reinforcements from rebel-held Sabrata, about 25 miles to the east, could not arrive because Gadhafi forces reportedly were stationed near a road connecting the two.

“We want to send this message to NATO and to all people to help us now,” Fonas said.

“He has become, for all intents and purposes, part of Libya’s past, and now people need to look to build Libya’s better future,” Feltman said on ABC’s “Good Morning America.”