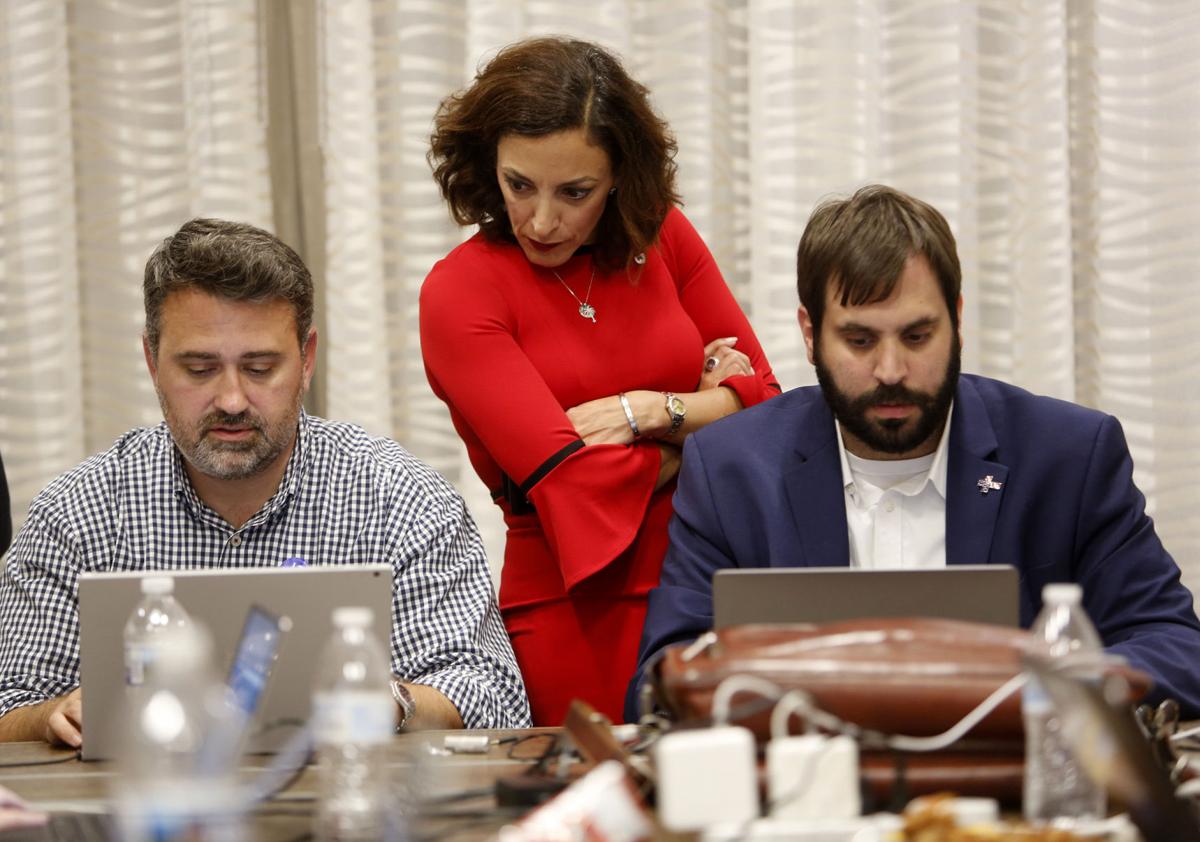 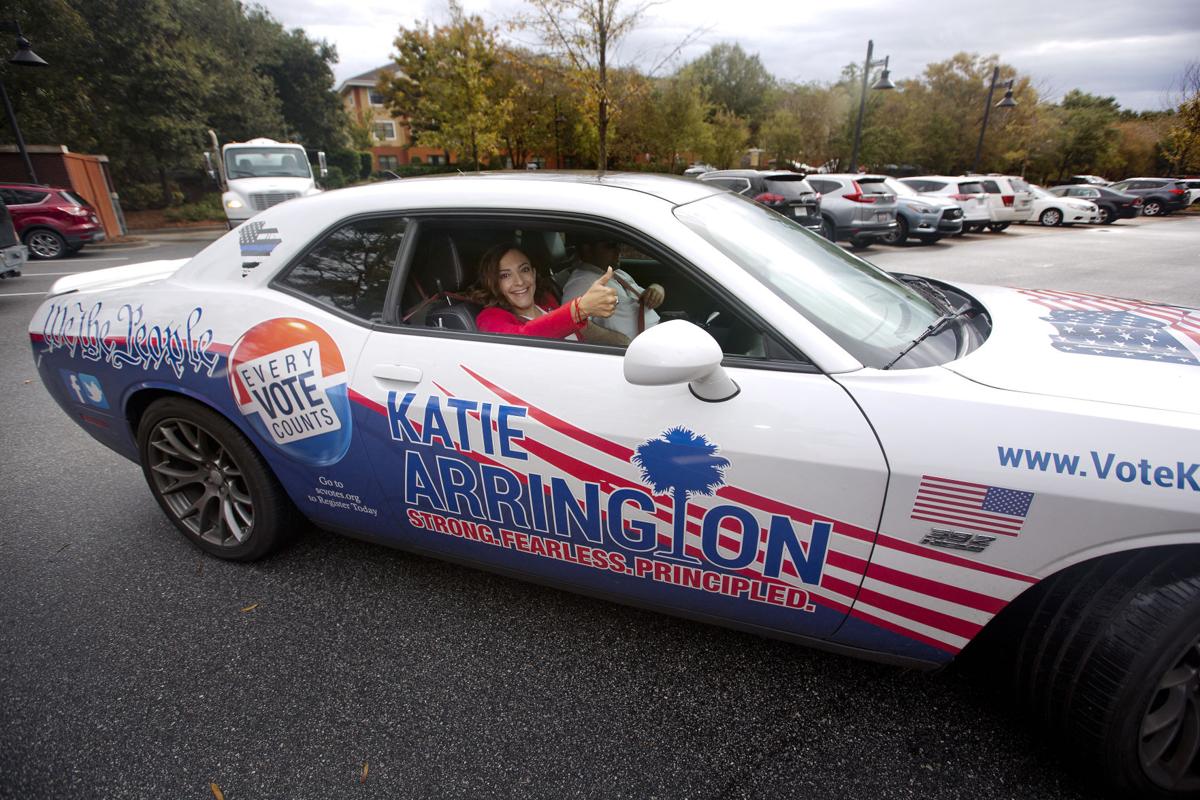 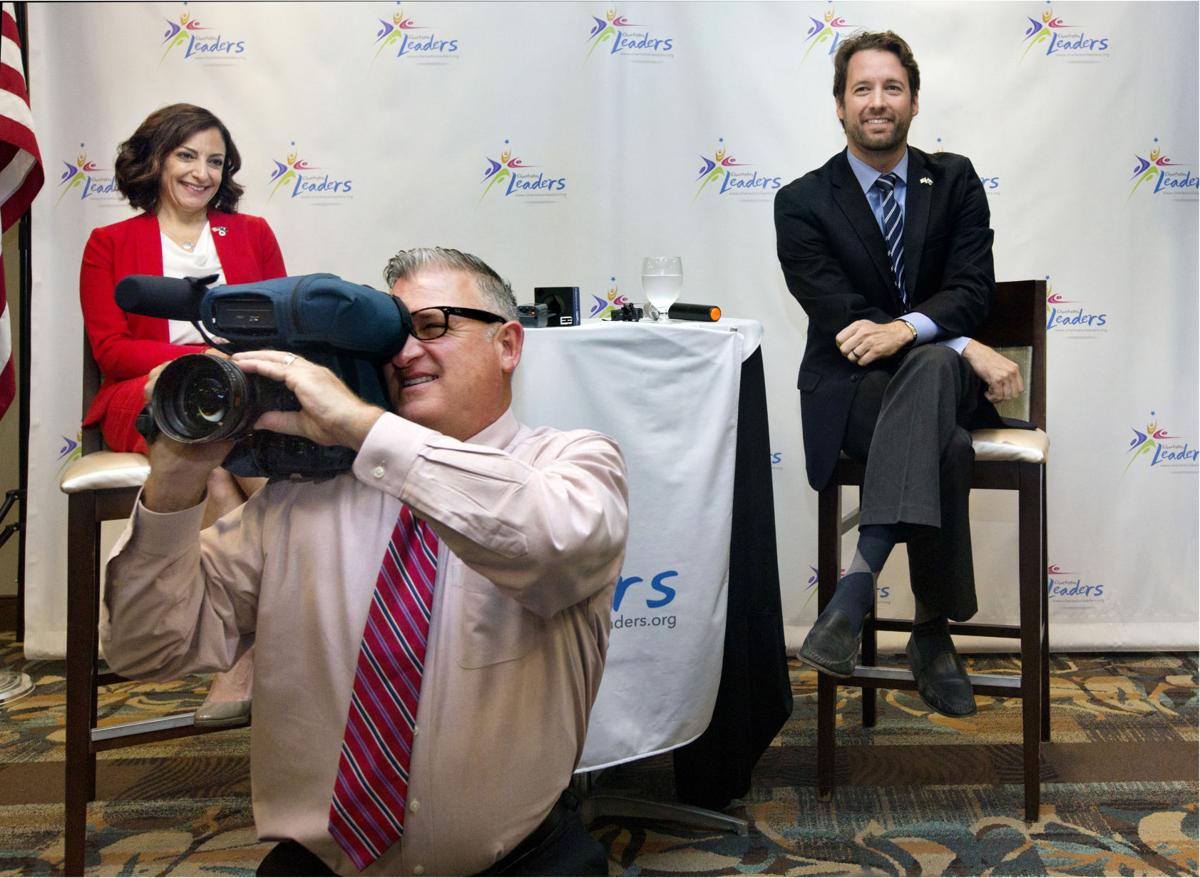 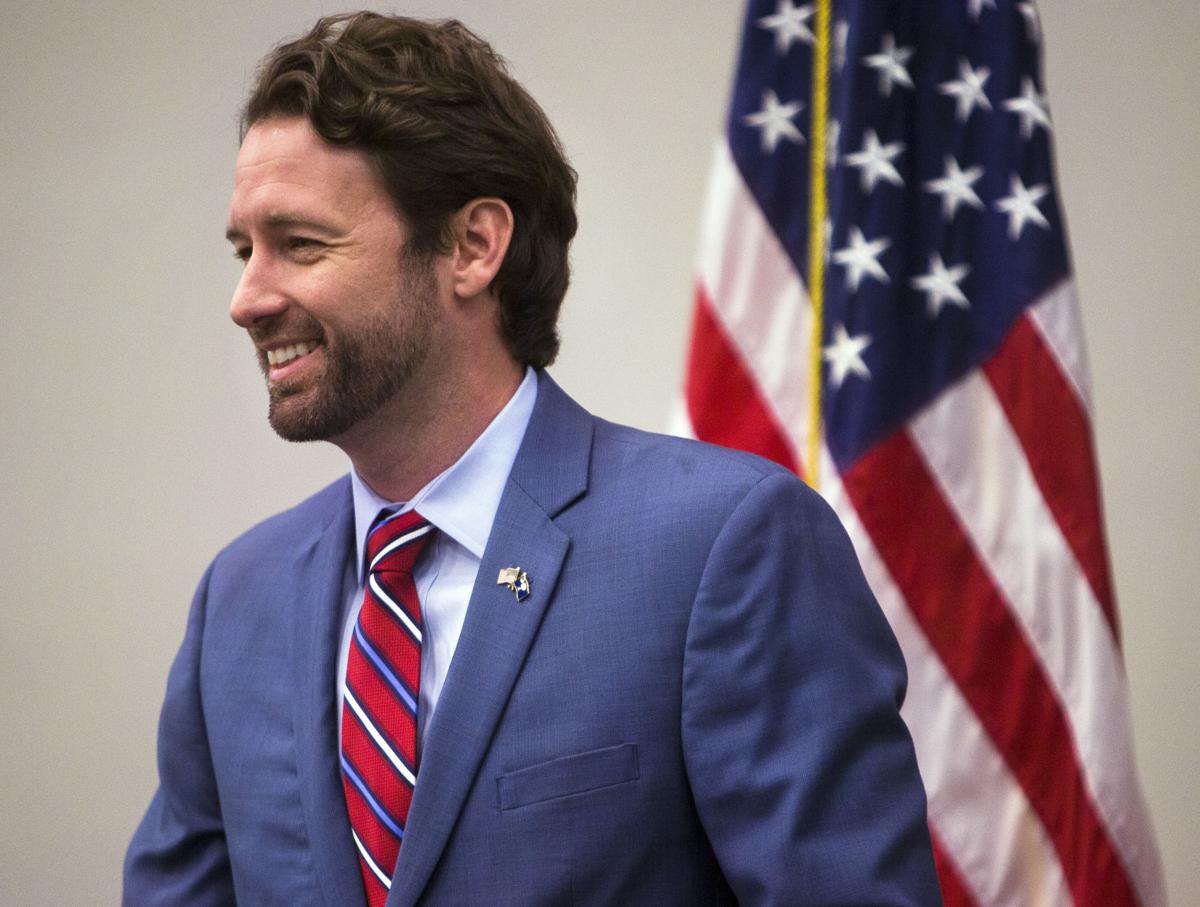 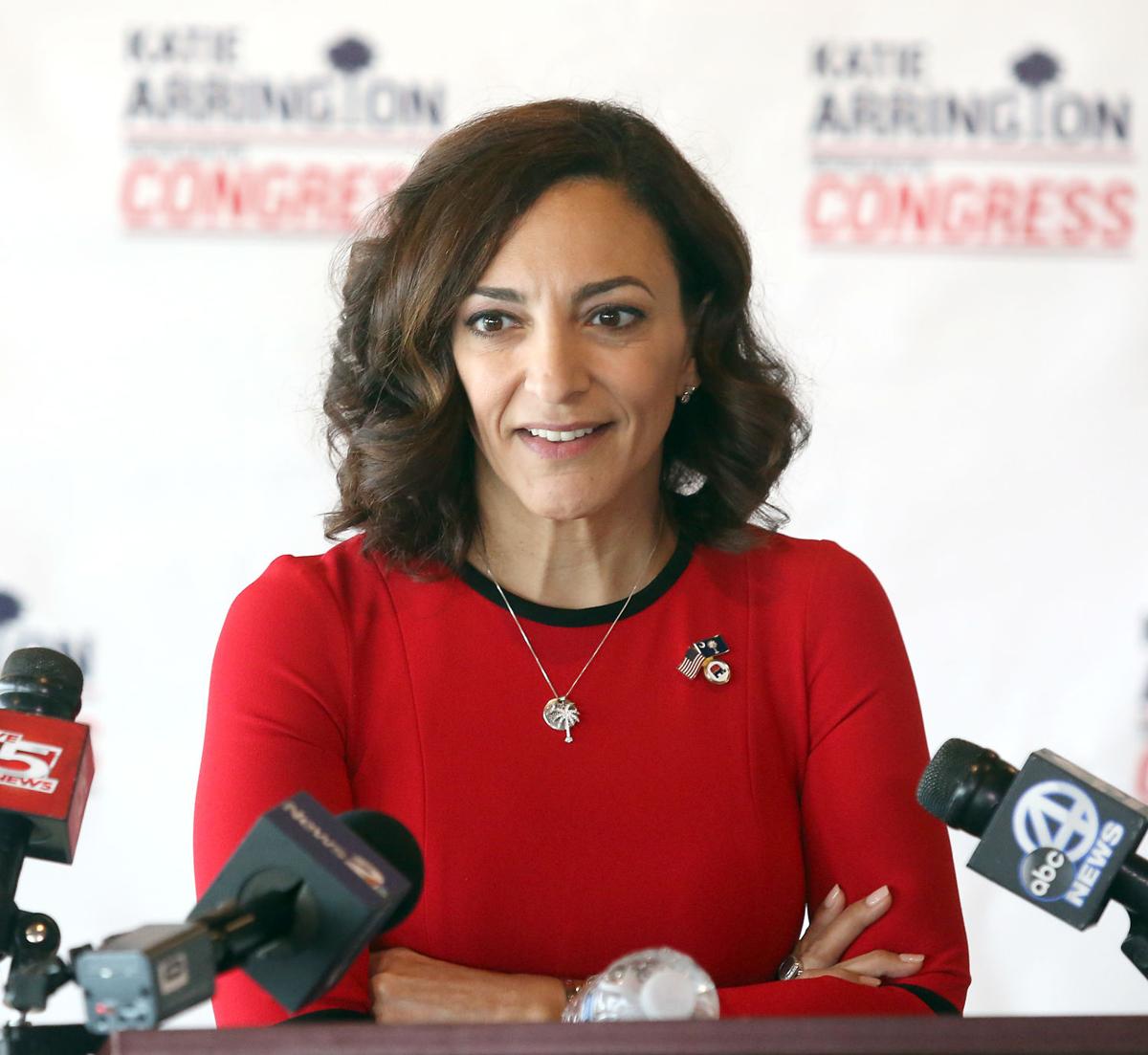 It was late at night when Katie Arrington grabbed her cellphone and began furiously texting Steve Stivers, the head of the House GOP's campaign operations.

She needed to tell him personally that they had a problem in South Carolina's 1st Congressional District.

For months, her campaign had been begging for more resources, more money and more support from the National Republican Congressional Committee. Each time, their plea fell on deaf ears.

But it was Oct. 5, and Election Day was almost a month away. Arrington was calling for reinforcements.

Her Republican primary win in June over incumbent House Republican Mark Sanford had catapulted her onto the national political stage. It was a massive electoral victory that Arrington secured on a rainy primary Election Day thanks to an aggressive grassroots campaign and a late-afternoon tweet endorsement from President Donald Trump.

Her allegiance to Trump had been electorally rewarded.

To the outside world — and even to top national political analysts at the time — it looked like Arrington's general election contest was going to be a cakewalk.

Instead, what happened was an assumption-shattering defeat.

Arrington lost to Democrat Joe Cunningham by 3,982 votes, an outcome that forecasters at FiveThirtyEight had given a 9.8 percent chance of happening in October. Even the nonpartisan Cook Political Report characterized the odds of a Democrat win here in August as a "long shot.”

Last week, the Arrington campaign opened up about their loss and tried to publicly and privately dissect what went wrong. Speaking to the East Cooper Republican Club, one of the campaign's chief strategists claimed they knew as early as this summer that their race was going to be a fierce fight.

"Believe me," said Andrew Boucher, a partner at RightVoter who served as a general consultant to the Arrington campaign. "We were pressing panic buttons since June here, screaming and yelling to little avail."

But outwardly, the Arrington campaign exhibited little, if any, signs during the race that they were concerned about some of the factors they now say led to their candidate's electoral downfall. The Trump-heavy messaging that worked for them in the primary stayed largely the same.

Some trouble spots are obvious, like the fundraising gap Arrington could never seem to close, or the fact that Cunningham beat them to TV and stayed on the air throughout the general election campaign.

Other challenges, like Arrington’s failure to appeal to suburban Republican swing voters, becomes a more complicated story to tell. Was it really a split among Republicans who backed Sanford, like she hinted at during her concession speech, or was this a Trump referendum vote?

What happened in South Carolina’s 1st Congressional District has been largely reduced to catch-all explanations and sweeping generalizations about issues like offshore drilling, but the story of Arrington’s loss is as nuanced as the coastal district itself.

Though historical election data gives a Republican candidate in the district a built-in 10-point advantage, it is a unique district. In 2016, Trump bested Democratic presidential candidate Hillary Clinton in the district by 13 points.

By contrast, the more moderate Mitt Romney outdid President Barack Obama in the district by 18 points.

But Charleston, the most populous county in the district, has shown some movement to the left, morphing in recent years from red to purple in voting preference.

While national analysts continually categorized the district as "safe Republican," Arrington and members of her campaign team met with the National Republican Congressional Committee in Washington, a customary practice following a primary win.

At the June 20 meeting, Boucher said their goal was to be placed into the NRCC's "Young Guns" program for competitive congressional seats, where the NRCC would aggressively invest in TV ads and staffing resources for candidates.

Instead, they were put into the Vanguard Program, a designation that treated Arrington like a victor-in-waiting rather than a challenger-in-need. Even NRCC Chairman Steve Stivers said in a July press release that he had “no doubt” that Vanguard candidates like Arrington would win in November.

Efforts to reach the NRCC for comment were unsuccessful.

On TV alone, the Arrington campaign said their numbers show Cunningham outspent them nearly 3 to 1.

The latest publicly available federal election reports from October show Cunningham raised about $1.9 million to Arrington's $1.3 million during the election cycle. Arrington also dropped an estimated $346,909 to self-finance her run, according to campaign finance watchdog OpenSecrets.org.  Post-election numbers due in December could show an even wider gap.

However, the numbers alone don't tell the full story.

"Her dollar amount comes in over $1 million but a huge chunk of that went into the primary," Boucher said. "When we were running in the primary, we had to spend every dollar we had to win. We couldn’t spend money to build campaign infrastructure."

Arrington's campaign had just three full-time staffers compared with the 10 or so with the Cunningham campaign.

But when fundraising numbers showed Arrington trailing Cunningham in a Republican district in mid-October, Arrington campaign strategist and spokesman Michael Mulé issued comments about their alleged momentum and the "tremendous support Katie has across the district."

South Carolina Republican strategist Walter Whetsell said fundraising can be a reflection of a candidate's ability or inability to connect with voters. He has run GOP congressional campaigns in South Carolina for U.S. Reps. Jeff Duncan and Ralph Norman.

"In political terms, there are two primary factors that define the best candidates: Their ability to raise money and their ability to get voters to like them," Whetsell said.

But when pressed as to whether they thought they had a likeability issue with Arrington, Mulé and Boucher denied it. Boucher called Arrington "one of the best stump speakers" he had ever seen. Mulé said she was relentless despite being in excruciating pain every day following her June 22 car accident in which she was critically injured.

"Money talks, and it certainly did in this race," Mulé said. "But money also made an issue out of something that wasn't really an issue."

In August and September, the Arrington campaign conducted polls asking voters for their most important issue in the race.

Illegal immigration was at the top followed by jobs and the economy. Offshore drilling polled at 1 percent, Boucher said. The highest it ever got, he said, was 4 percent.

"This is what is called a MacGuffin. It is an issue by which someone can target a specific demographic that they need, right?" Boucher said. "This was the issue that Joe Cunningham successfully was able to use to target the Democratic vote. If it has been a different Republican nominee, it would have been a different localized issue."

The issue began to take off after Arrington stated during the primary at a Beaufort League of Women Voters forum that she supported Trump lifting the ban on offshore drilling along the South Carolina coast.

When two coastal mayors, who identify as Republicans, later endorsed Cunningham because of Arrington's stance, she then issued a statement saying she did not did not support drilling.

To combat the comment, Arrington reiterated her opposition to offshore drilling at every turn. She also accused Cunningham of being a one-issue candidate.

Behind the scenes, the Arrington campaign spent about $50,000 on digital advertising to get their message out along with a targeted mailer campaign.

The issue was important enough that Arrington addressed the issue in a TV ad, where she stated she had met with the president to demand an exemption for the Palmetto State.

But by then, it may have been too little too late.

"That gave Republicans permission to cross the aisle and vote for a Democrat," said Tyler Jones, Cunningham's spokesman and strategist. "I've been working in this business 15 years in South Carolina, and I can tell you that's never happened before — ever."

"Katie Arrington's defenders have missed the point on the relevance of the offshore drilling issue," he said. "It’s arguable that offshore drilling cost her this election. If it did, it wasn’t on the merits of the issue. It was on the perception that she changed her position.

But when Arrington got her chance to speak publicly after her loss, she first blamed Sanford, whom she hammered in the primary for his Trump criticism.

Her unconventional concession speech comments flicked at something few national watchers understood about the underlying dynamics on the ground in this political race.

"You had an internal Republican war going on down there," said Katon Dawson, a former South Carolina GOP Chairman.

"With Katie backing the president in the primary and getting some help from him at the last minute to whip Mark, while you've got Mark talking about the things that matter to him and his opposition to the president, well, that just doesn't lend itself to a unified party."

Charleston's suburbs turned out to be the battlefield.

Suburban voters and the Trump factor

Arrington won Berkeley, Dorchester, Colleton and Beaufort counties. Where she lost was Charleston County, and specifically in suburban areas like Mount Pleasant and West Ashley.

"What defines a suburb?" Boucher hypothetically asked his fellow Republicans. "It’s a place where people care more about what their neighbors think than they do about their own political opinions."

More seriously, Boucher said the hallmark of a suburban district is looking at the split between "Romney Republicans" and "Trump Republicans." Where 2012 Republican presidential nominee Mitt Romney performed better than Trump did in 2016, they considered a suburb.

Arrington knocked on doors in suburban areas of Mount Pleasant and West Ashley from August through the third week in September, Boucher said.

But if the Arrington campaign was aware that they needed to sway Republican swing voters — especially GOP-leaning women who are finding it difficult to defend Trump —  their messaging didn't reflect that.

Instead, it echoed national GOP talking points, which included equating a vote for Cunningham as a vote for Nancy Pelosi and claims that Cunningham favored an open border policy.

Already, Charleston Republicans are trying to take lessons from the loss.

"We can't act like things haven't changed," said Larry Kobrovsky, chairman of the Charleston Republican Party. "To win in Charleston County, we have to now go beyond our base."

But what's also needed is time.

​"When you're a part of a campaign that loses, it's understandable and easy to blame others," Whetsell said. "A bit of self-reflection seems to be missing here. Maybe in time, we'll know more. In the long run, the best lessons that candidates and campaigns learn and apply to their next attempt often come from those losses."

And Arrington has already hinted that she's interested in a second shot at this seat.

A week after her loss, Arrington was in Washington meeting with groups.

"The conservative movement, I think it’s imperative. We’ll see what happens. It’s two years of whatever God has in store and we’ll see where we are in, I’ll say, six months. Everyone should know where we are in six months," she said.