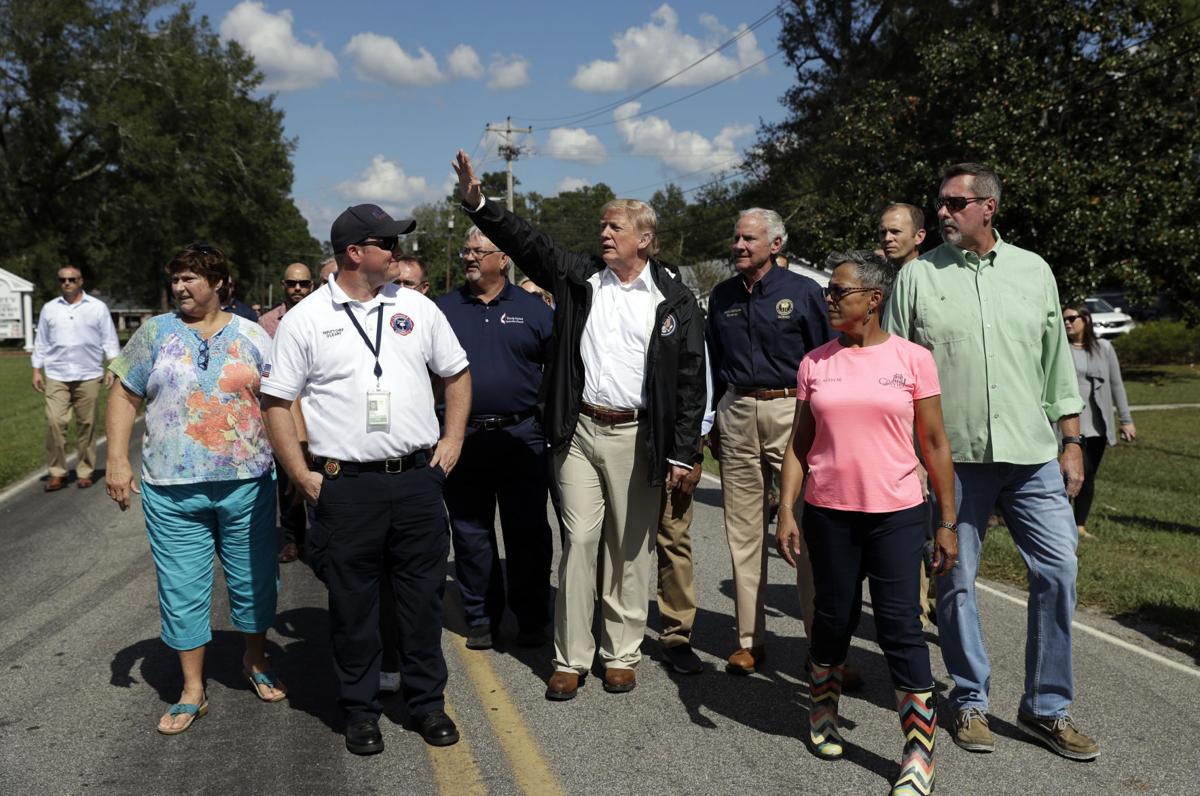 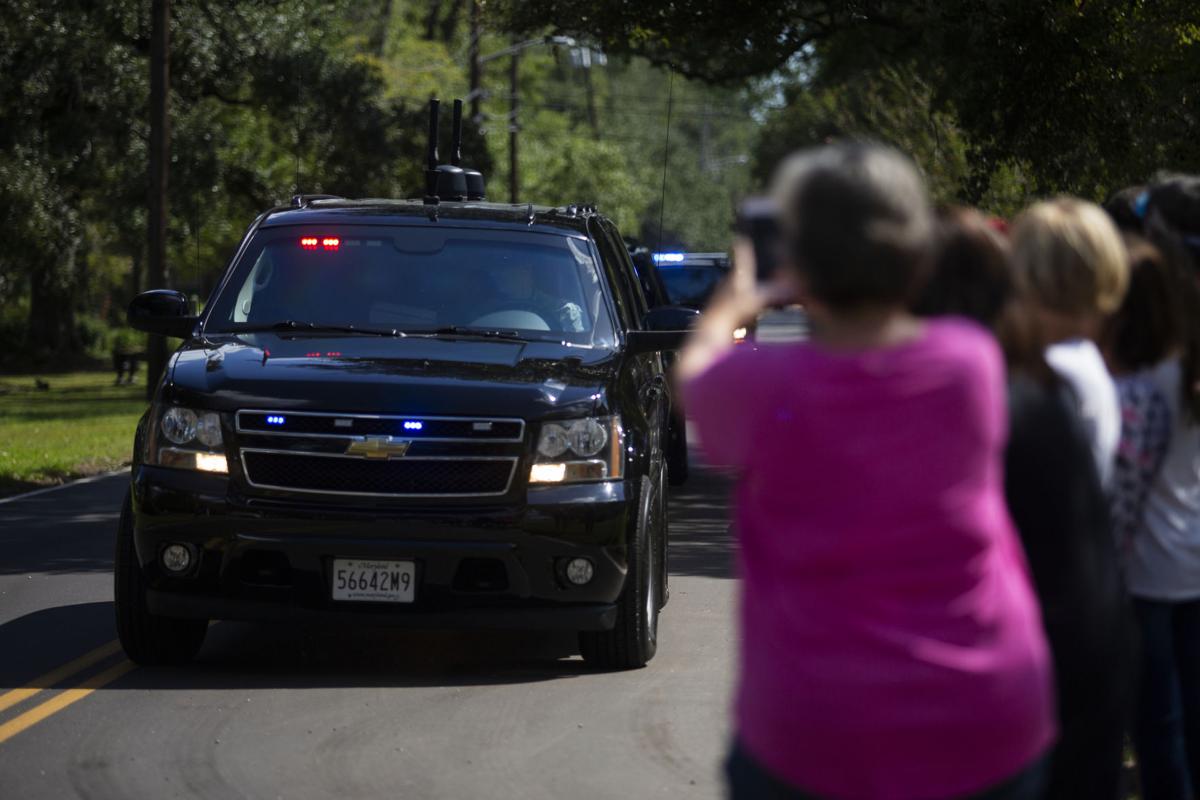 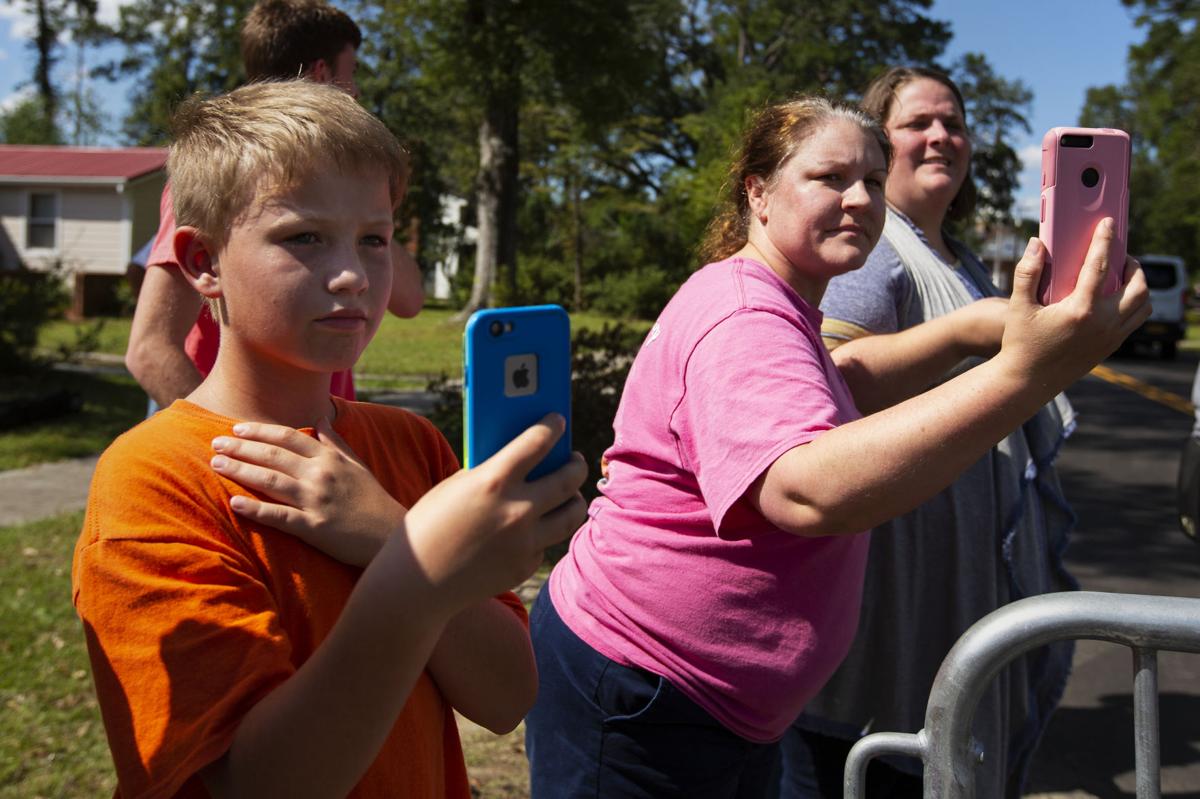 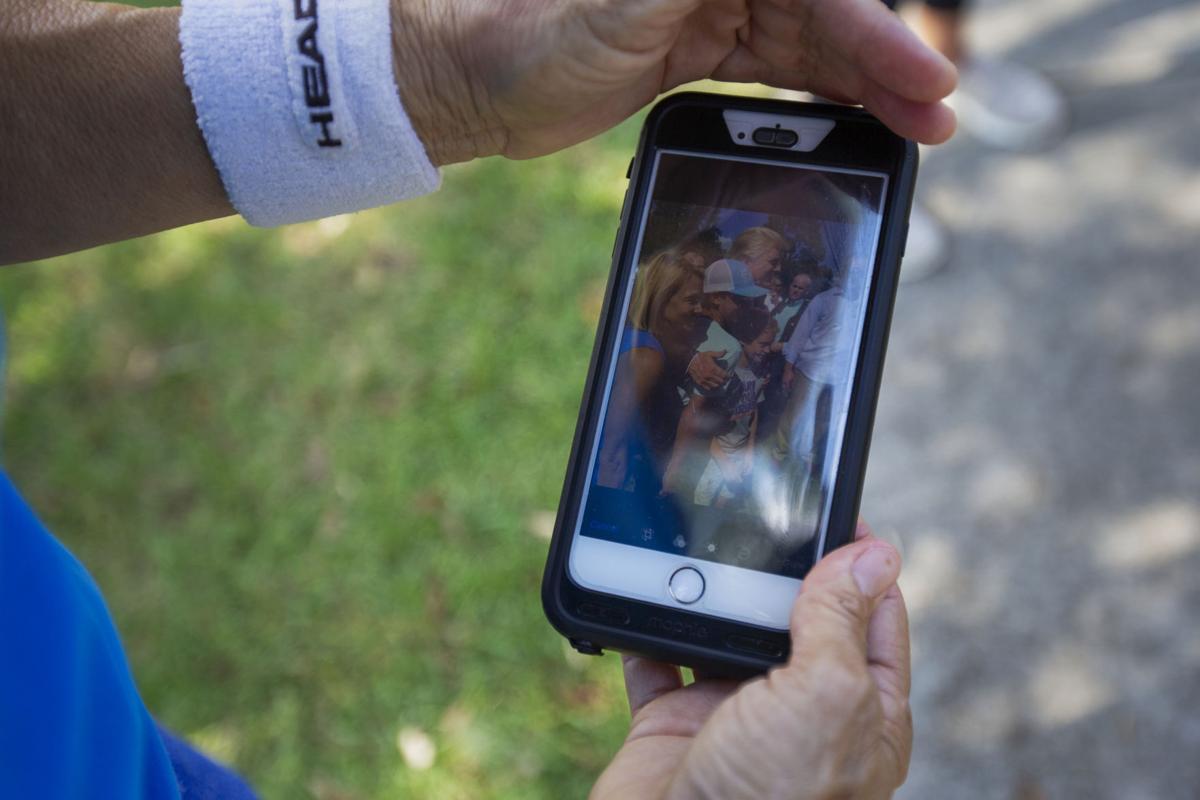 Ellen Caught shows of a picture she took of President Donald Trump during his visit to Conway on Wednesday, September 19, 2018. Lauren Petracca/Staff

Ellen Caught shows of a picture she took of President Donald Trump during his visit to Conway on Wednesday, September 19, 2018. Lauren Petracca/Staff

CONWAY — President Donald Trump promised a maximum recovery effort from Washington as he toured Hurricane Florence damage in South Carolina on Wednesday, watching the rising rivers in person and warning of the rush of water heading toward populated areas and the coast.

"Washington is with you, Trump is with you, we are all with you 100 percent," the president said at the Horry County Emergency Operations Center in Conway. "And we’ll get through it."

As of late Tuesday night, 37 deaths have been attributed to Florence, including eight in South Carolina.

Trump's first stop in the Palmetto State was a neighborhood surrounding Conway's Trinity United Methodist Church that's near a tributary of the flooding Waccamaw River.

“I’m just honored that he sees our plight as worthy of his time,” said Conway Mayor Barbara Blain-Bellamy shortly before Trump's arrival, adding that the city had been buzzing about the possibility of a presidential visit for days.

She said Conway, which some residents lovingly refer to as “Mayberry by the sea,” has seen its residents coming together to help one another as they brace for a deluge of water.

“There’s never a good time for it, and we never seem to be prepared enough for it,” she said as she took off her navy wedge heels and put on a pair of multicolored rain boots before Trump arrived to witness the flooding.

Blain-Bellamy said she hoped the president’s visit would solidify the funds and resources her city might need to recover. Though the floodwaters had receded since the previous day, she said it was important for the president to see “the beginning of devastation in our community.”

While the sun beamed overhead Wednesday, Blain-Bellamy said she fears residents could get complacent even though the threat of the rising river still looms.

"You haven’t really been hit yet by comparison to what’s coming," the president told emergency officials and first responders. "It could last a long time. But you’re going to have a rebuilding process, and we are behind you from day one."

More than 200 roads and bridges in the Pee Dee remain closed, including Interstate 95 in Dillon and Florence counties. More closures are expected as river rise through the weekend.

Ten dams, including four in Marlboro County, have been breached, though none of them rated life-threatening, according to the state Department of Health and Environmental Control.

More than 30,000 people are in the path of potential floodwaters in the Pee Dee, state emergency officials say. The state has food and water staged in Florence to feed 30,000 people for three days, and the S.C. National Guard has temporary bridges ready if needed.

State Rep. Russell Fry, R-Surfside Beach, said Trump's visit offers a powerful symbol to residents in the area that he cares about their situation and that the federal government will be prepared to help.

"It is important that everyone, from the top all the way down, is really pulling together to start a proactive recovery that we'll be in for months to come," Fry said.

Trump made it to Conway after a one-hour flight aboard a Marine One helicopter from North Carolina, where he spent the first half of the day. He toured a storm-battered neighborhood in New Bern that was flooded by the Neuse River after meeting with recovery officials there.

"I love South Carolina, I love this state," Trump said after viewing flooding from the air and ground and warned tougher days were to come, promising first responders that he and South Carolina's congressional delegation are "all in there fighting" for the state. "It’s going to work out very well."

The river is expected to rise by 1½ feet a day starting Friday and should pass the record crest of 17.9 feet, set just two years ago during Hurricane Matthew, some time Saturday afternoon, according to the National Weather Service.

The Waccamaw is forecast to reach 20.4 feet on Monday morning and keep rising. Conway city leaders have said the river could surge past 22 feet later next week, sending enough water into neighborhoods to damage almost 1,000 homes. As of late Wednesday, waters were starting to rise again.

As Trump walked along Long Avenue flanked by McMaster, Blain-Bellamy and FEMA Administrator Brock Long, he asked Patrick O'Leary, an airport deputy fire chief who lives in the neighborhood threatened by floodwaters, if residents considered building their homes on 5-foot-high stilts. "That maybe something we have to do," O'Leary said.

O'Leary added that the neighborhood dates back to the 1950s and has never seen flooding like what it has seen during Matthew and Florence.

"When do you expect the big day?" the president asked. O'Leary said homes in the area will flood Saturday and the crest is expected early next week.

Later, after the group surveyed a flooded street, state Sen. Luke Rankin gave Trump a white Conway High School cap before the president spoke to a crowd gathered in a yard nearby.

Dozens of onlookers lined Main Street in Conway under a sweltering mid-afternoon sun to watch the president's motorcade arrive at the Horry County Emergency Operations Center.

Among them was Diana Rowe, 39, and her 7-year-old daughter Reagan — named after the former president — who were out shopping when they saw the crowd and joined in.

"I said, 'This is going to be a once in a lifetime experience,' and it was," Rowe said. "It was amazing."

Rowe, who has lived in Conway for 14 years, said she's confident her home is on safe ground and has been donating supplies to the United Service Organizations to help neighbors in more treacherous territory.

"It could have been a lot worse," Rowe said. "But I appreciate the visit. I love any chance I get to see (Trump) and so does my daughter."

The crowd outside the Horry County Emergency Operations Center waves at @realDonaldTrump as he heads out. #scpol pic.twitter.com/jpuKLfSpVE

Hours before Trump arrived, Candace Johnson was packing up her one-story home where she has lived since she was 8 and where rising floodwaters now surrounded it like a moat. She felt no choice but to leave the house behind.

As Johnson loaded another box into a U-Haul truck, she looked back at her three-bedroom house, shaking her head.

“I just pray it won’t be as bad as they say it will,” said Johnson, 31, before slamming the U-Haul door shut.

When Johnson heard Trump was coming to South Carolina, she had one thought: “I just hope he sees pictures of our street and how bad it is here.”

Then, the president showed up at her house. They shook hands and he complimented her on her home.

“It’s nice,” she said the president told her. “It was,” she responded.

She then told the president it was the fourth time she has seen flooding at her house, but it’s the first time she has left.

Johnson said after meeting the president that she’s not sure how federal dollars will help her save the home that her grandmother owned and has passed down through her family.

An hour after the motorcade drove away, Johnson drove away, too, wondering what she would find when she got back.

SCDOT closes I-95 near Florence due to rising flood water

The S.C. Department of Transportation has closed Interstate 95 outside of Florence due to rising flood water.

President Donald Trump, along with many of the top 2020 Democratic White House contenders, are coming to a historically black college in Columbia next weekend for a bipartisan forum on criminal justice reform.