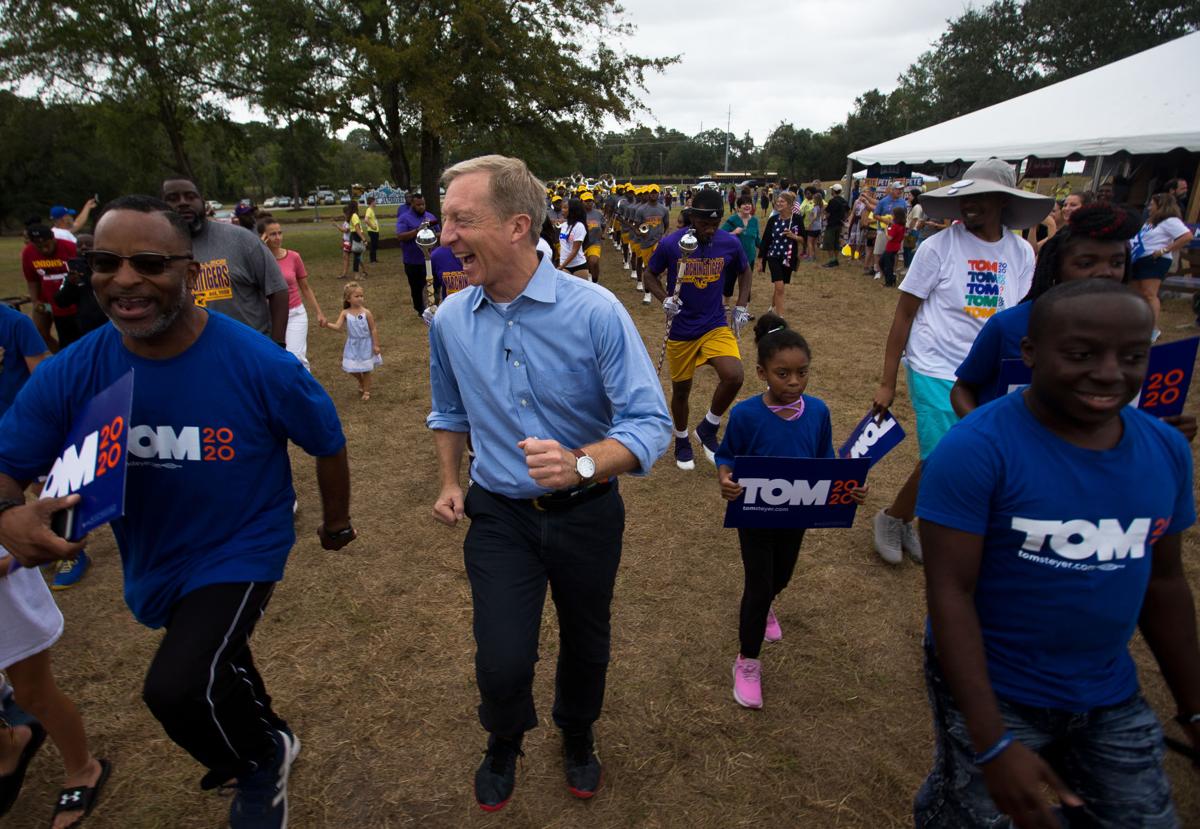 Presidential candidate Tom Steyer marches with the marching Tigers as he makes his way into the crowd to speak at the Charleston County Democratic Party Blue Jamboree on Saturday, Oct. 5, 2019, at The Bend in North Charleston. The Steyer campaign has 82 paid staffers in South Carolina. File/Andrew Whitaker/Staff 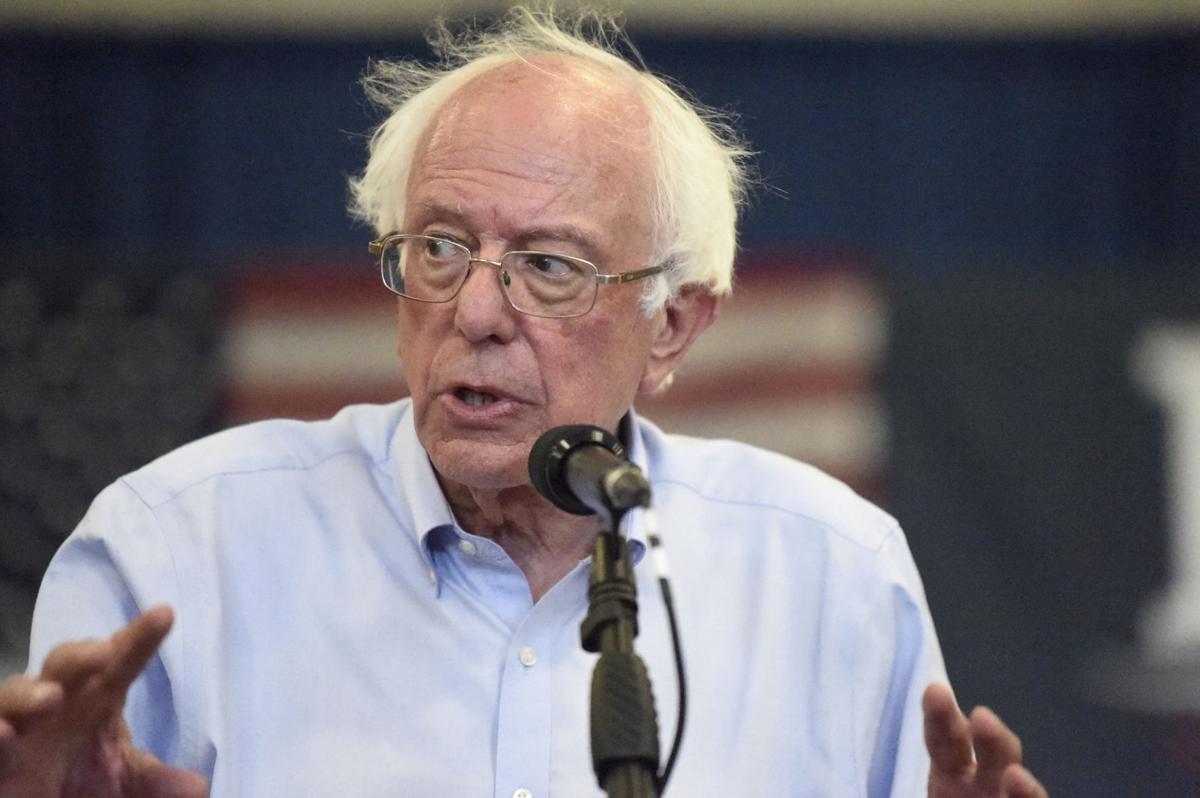 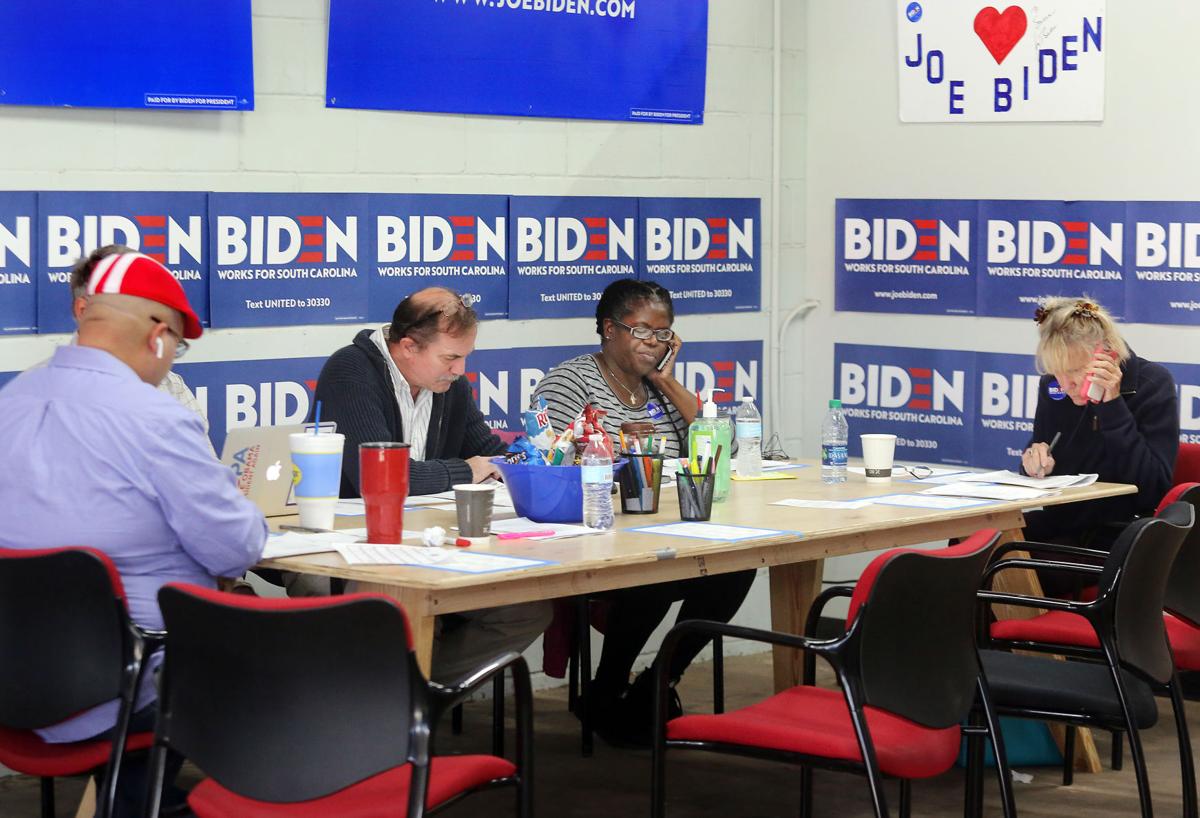 Joe Biden may be the Democratic presidential candidate winning in South Carolina polls, but his ground game in this key early voting state doesn't come close to the political army working for billionaire Tom Steyer.

The Steyer campaign has 82 paid staffers in South Carolina. Biden's team only reports having more than 40 paid staffers — the same as Massachusetts Sen. Elizabeth Warren.

Vermont Sen. Bernie Sanders has the second-largest team in the state, with 72 workers on his payroll, followed by South Bend Mayor Pete Buttigieg, with 50.

Most of the campaigns reached by The Post and Courier say they plan to keep hiring and bringing in volunteers as the race sprints toward February, with some already identifying which states will provide the extra bodies here.

Antjuan Seawright, an S.C.-based Democratic strategist, said the early campaign build-out in the state is a predictable political play.

"People are starting to realize South Carolina is the battleground," he said. "This is the place where heaven sanctioned as its political sweet spot. For presidential candidates, they know South Carolina could mean political life or death."

Seawright advised Hillary Clinton's presidential campaigns here in both 2008 and 2016, and said South Carolina holds a power that other early states lack, specifically beginning the transformation from political contender to serious nominee.

So you're running for president in 2020 — now what? A guide to campaigning in South Carolina

While South Carolina doesn't vote until Feb. 29, it is the campaign staffers on the ground who can move the needle while candidates split their time between Iowa, New Hampshire and Nevada.

But does size matter?

It is the first place where the all-important black vote takes the national stage, since African American voters will account for more than 60 percent of the Democratic primary turnout.

But he also warned a big staff isn't a substitute for handshakes and stump appearances.

"You can have all the staff in the world here, and they can spread like locusts across the state. But if a candidate isn't coming here regularly, then it's going to make life hell for those field organizers," Robertson said.

"I don't think South Carolina voters, especially our voters in communities of color, have seen quite the attention that the homogeneous voters in Iowa have gotten," Robertson said.

Even now, Robertson said Barack Obama's 2008 campaign remains the gold standard by which he measures all presidential campaigns in the state. Current staffing levels, he said, don't appear to have hit that mark.

For all the candidates, starting with Steyers' in-state staff of 82 down to Marianne Williamson's 0 (even before she dropped out Friday), the total number of workers here is at about 351 for now.

For comparison, the New Hampshire Democratic Party recently estimated there were about 700 campaign workers in that state.

College of Charleston political scientist Gibbs Knotts said South Carolina is worth the investment, since it can act as a tie-breaker after Iowa and New Hampshire.

"We are also the first state right before the tidal wave of Southern states who vote in Super Tuesday. So if you are a candidate who wants to do well in states like Georgia and Alabama, I would think South Carolina would be the place you'd pay attention to," Knotts said.

Knotts also predicts South Carolina could be where the field gets whittled down to the single digits.

Who's investing, and who isn't

When Sanders ran in 2016, South Carolina was where he suffered a brutal primary loss to Hillary Clinton.

Sanders' South Carolina communications director, Michael Wukela, said this time around the senator is deeply committed to connecting with African Americans. It's intentional that 72 percent of the staff are people of color, and 80 percent are S.C. residents or natives, he said.

"Our efforts this time are much larger and it has been from the beginning, both in terms of staffing and volunteers. We are much more organized and the results have been huge," he said.

Steyer, the billionaire who has flooding the airwaves with TV and radio ads, is depending heavily on organizers who make up 91 percent of his staff.

"The reason for that is every time Tom is in South Carolina, his following and his momentum continues to grow," said Tiffiany Vaughn Jones, Steyer's S.C. spokeswoman.

Biden, Bernie and the billionaires: State of a changing 2020 SC primary race

The campaign for Deval Patrick, who entered the race in November, reports having about 20 paid campaign staff across South Carolina, which is just as many New Jersey Sen. Cory Booker and tech entrepreneur Andrew Yang.

Patrick's senior adviser Don Calloway said the campaign is under no illusion about its size. He insisted its leaner operation will make it more agile.

"We are smaller, but we have the assets in place that will allow us to compete effectively and aggressively in South Carolina," he said.

But they aren't the smallest.

It is unclear how many people are working for Minnesota Sen. Amy Klobuchar. A national spokesman said the team is "ramping up operations in the state" but declined to give a number.

Others are making their political bets elsewhere.

Former Maryland congressman John Delaney, who has been running for president longer than anyone else in the Democratic field, is focused on Iowa. The Delaney campaign did not return repeated requests for comment about its South Carolina effort.

2020 campaign staff size in SC, by the numbers

The Post and Courier reached out to the remaining 13 Democratic presidential candidates to determine how many paid staffers they have in South Carolina. Here's what they told us.

Michael Bloomberg: Did not return request for comment. He is not on the S.C. Democratic primary ballot.

Amy Klobuchar: A spokesman said she is ramping up operations in the state but declined to give a total staffing number.

Democrat Cory Booker dropped out of the presidential race Monday, ending a campaign whose message of unity and love failed to resonate in a political era marked by chaos and anxiety.

While the results of South Carolina's Democratic presidential primary will ultimately be decided by rank-and-file voters, the candidates have separately been engaged in a yearlong battle to cultivate influential local officials in hopes of adding their imprimatur to the campaigns — and with it, ideally, the votes of their constituents.

While eight Democratic presidential candidates marched arm-in-arm down the streets of Columbia for King Day at the Dome, Booker was about a mile away saying "thank you" to his South Carolina staffers.