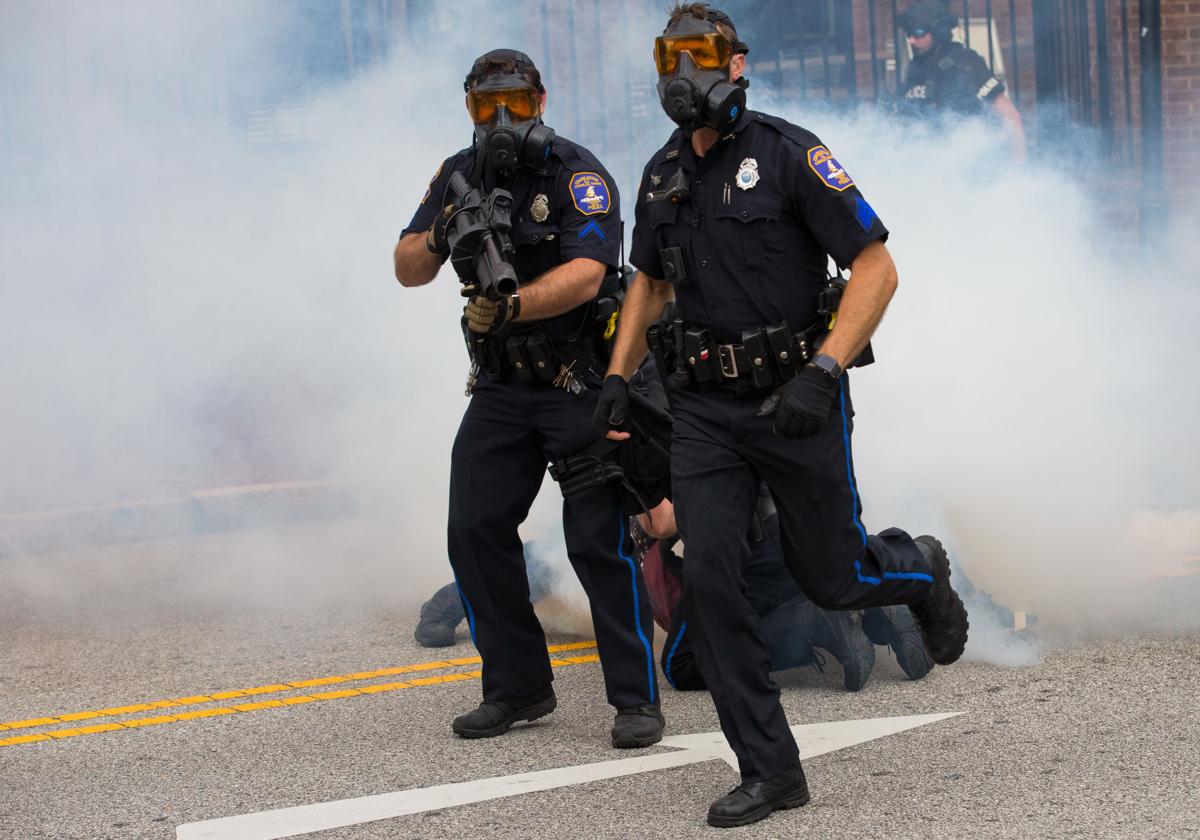 Police fire off tear gas during a protest on Sunday, May 31, 2020 in Charleston. 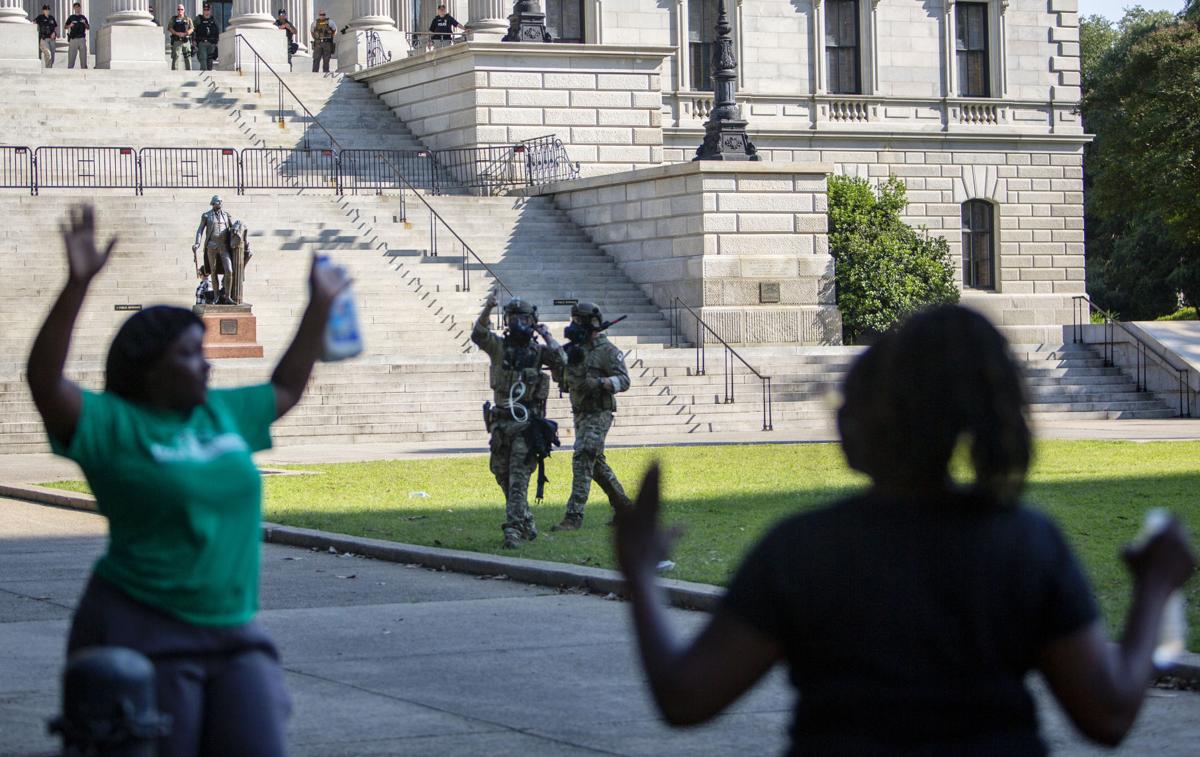 Law enforcement officers direct protestors away from South Carolina’s State House after tear gas was fired during a demonstration for George Floyd, an African American man, who died in Minneapolis May 25 after a police office kneeled on his neck, Sunday May 31, 2020, in Columbia. Gavin McIntyre/Staff

COLUMBIA — In two of the state's largest cities this past weekend, police dispersed crowds with tear gas, shooting canisters that arced through the air and bounced on the streets.

In South Carolina, deciding whether to use such force and when is up to each police chief. There's no uniform playbook for law enforcement agencies to follow in deciding how to maintain order when protests turn violent, as they did last weekend in Columbia and Charleston.

But as demonstrations continue following the May 25 death of George Floyd, some lawmakers here are insisting the decision-making process change.

“The people have a right to know what they are dealing with. We cannot simply accept the fact anymore that, ‘a police officer did it, and so it must be right,’” said S.C. House Minority Leader Todd Rutherford, D-Columbia. “In order for us to challenge that, we need guidelines.”

Richland County Sheriff Leon Lott said tear gas was launched Sunday after marchers, who wound their way along Columbia's streets to the back of the police department, threw rocks and bottles at a line of officers that had formed to stop agitators he believed were "hell-bent on burning the police department down."

“There were rocks thrown. I was there. It’s not a make-believe thing. ... I dodged rocks. I dodged a bottle,” Lott said. “At some point, you have to draw that line and once we got attacked, we responded. I’ll tell you this. That tear gas works. Whenever we’ve used that tear gas, the crowd has dispersed. That’s proven to be very effective.”

A day earlier, tear gas was used after a line of heavily armed officers drove a crowd that had burned and vandalized police vehicles into Columbia's Vista district near the Statehouse.

More than 100 miles away, members of the Charleston County Sheriff's Office's "civil disturbance team" clad in riot gear were called into the peninsula city to quell rioting Saturday.

How and where that unit is activated is up to sheriff's officials depending on what's happening, said Charleston County's spokesman Capt. Roger Antonio.

"The team is deployed to address acts of civil disorder that cannot be effectively addressed by the workforce on duty," he said.

Columbia's The Aristocrat bar lends a helping hand to protesters

In 2017, the International Association of Chiefs of Police called for every law enforcement agency to have clearly established use-of-force policies.

“Law enforcement agencies must provide officers with clear and concise policies that establish well-defined guidelines on the use of force," the association wrote. "It is essential that officers have a complete understanding of agency policy on this critical issue, regularly reinforced through training."

As of August 2018, at least 16 states have adopted use-of-force laws, including better tracking of officers' use of guns and deadly force, according to the nonpartisan National Conference of State Legislatures. Some have placed limits on what police can do. Colorado, for example, has banned choke-holds.

“When during the time of a riot should you actually spray gas on young people? When do you begin to make arrests of young people? Just because they're making a lot of noise and have not created any damages, why do you do what we saw on TV the other day,” said state Sen. John Scott, D-Columbia.

He was referring to pepper balls that were used Monday to thin a crowd around the White House for President Donald Trump’s walk through Lafayette Park.

Columbia's The Aristocrat bar lends a helping hand to protesters

“I support letting people have their voices heard, but when it comes to destroying other people's property and burning buildings and looting stores and all that stuff, they're no better than that rogue police officer. It takes away from the message that good, sound, honest people are trying to get out there,” said the Lake Wylie Republican, who was a State Law Enforcement Division agent before becoming sheriff.

“If you see somebody violating a law and you do nothing, then that's a dereliction of duty and you can be held accountable, but you've got to use good sense,” he said.

In its March review of police tactics, the National Institute of Justice — the research arm of the federal Department of Justice — wrote "no universal set of rules governs when officers should use force and how much."

De-escalation is always preferred over force, the association said in its report.

Lott said his deputies attempted to do that Saturday before shifting tactics. He said "the good people left" after he addressed the crowd at the police department, leaving those intent on mayhem.

“We stood there for quite some time and rocks and bottles thrown at us and lot of verbal stuff,” Lott said. “We didn’t respond. That’s de-escalation right there. We were just standing there protecting property. That’s de-escalation. When it gets to the point you’ve got to go on the offensive, that’s what we did.”

All of South Carolina's 46 sheriffs are independently elected and have the flexibility to determine their own policies for using force, said state Sheriffs' Association Director Jarrod Bruder, drawing a distinction between protesters and rioters.

"It isn’t uncommon to see sheriffs marching with protesters one minute and arresting rioters another," he said, in an apparent reference to Lott, who marched with protesters to the police department Saturday. "They are willing to defend the right to peaceably assemble, yet also willing to confront criminal activity when it is committed."

Seanna Adcox, Mikaela Porter and The Associated Press contributed to this report.