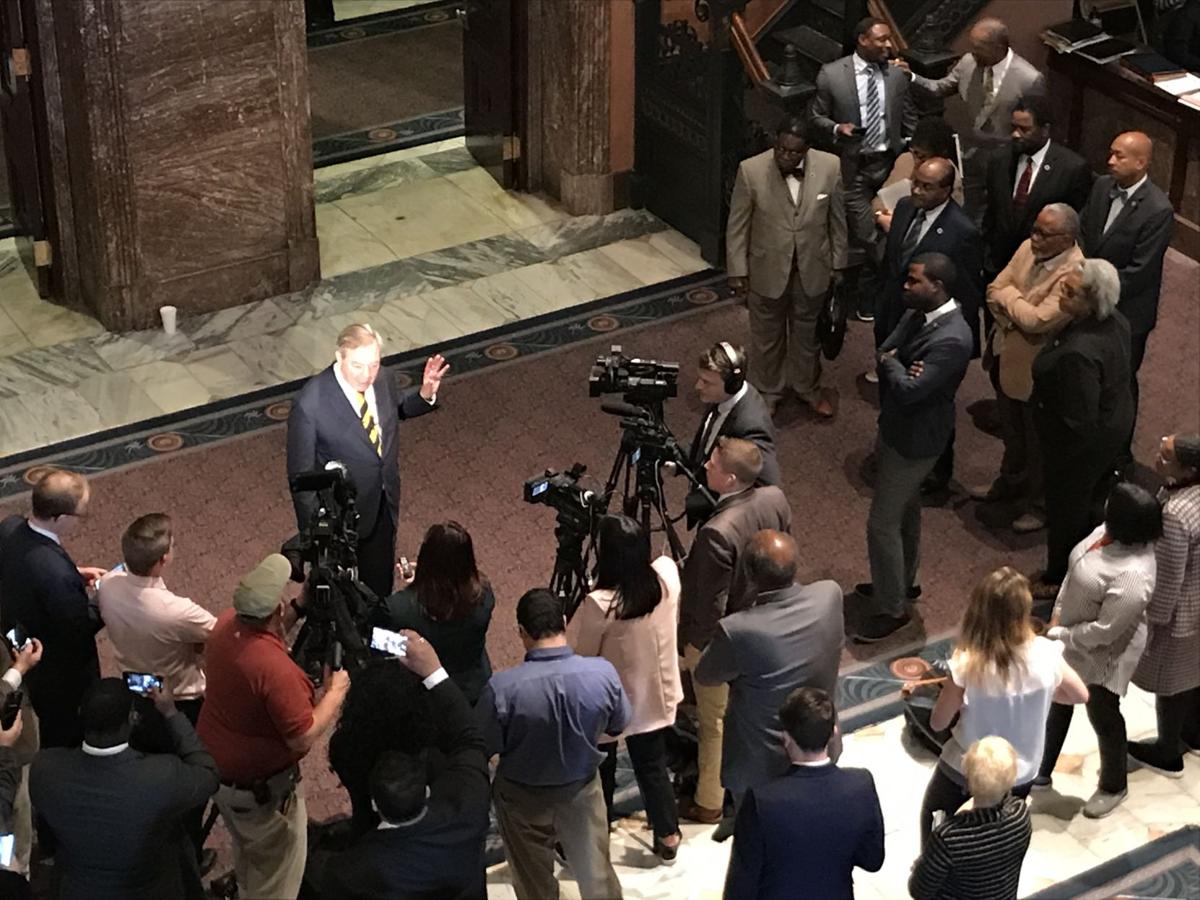 Members of the S.C. Legislative Black Caucus look on Wednesday as state Sen. Dick Harpootilan speaks to reporters in the Statehouse lobby about his controversial comments on work by their chairman for Tom Steyer's presidential campaign. 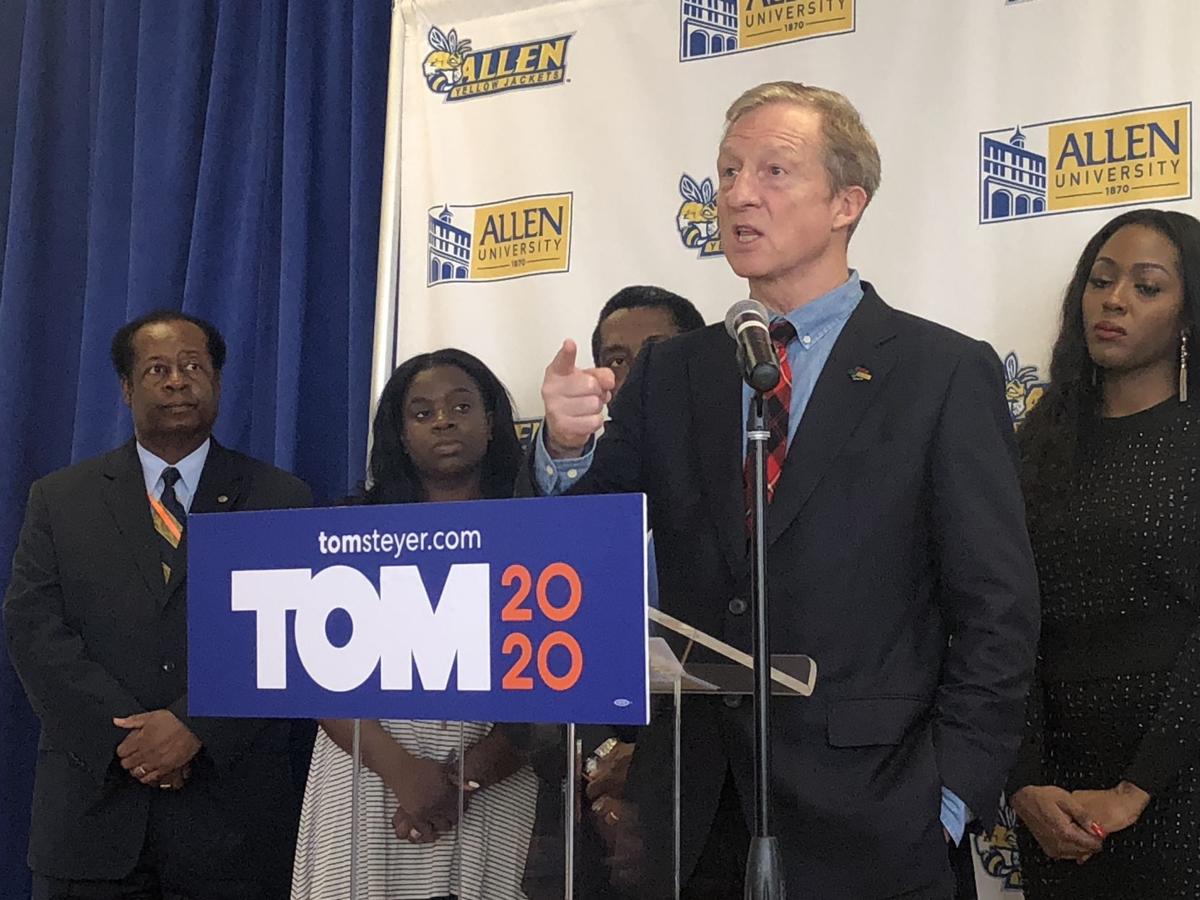 COLUMBIA — Businessman Tom Steyer's presidential campaign paid the chairman of the South Carolina Legislative Black Caucus more than $43,000 to serve as a senior adviser in the final few months of 2019, according to new financial disclosures.

Steyer is battling former Vice President Joe Biden to win over black voters, who are expected to account for roughly two-thirds of Democratic ballots cast in upcoming South Carolina presidential primary. With his prolific advertising and concerted efforts to reach into black community, a poll out this week showed Steyer has narrowed the gap among African American voters versus Biden, the front-runner in South Carolina.

The fight heated up Wednesday as several black lawmakers accused state Sen. Dick Harpootlian, one of Biden's top supporters in South Carolina, of making racist remarks about the compensation that the state's top African American legislator received from Steyer. Harpootlian called the accusations a distraction.

Campaign filings with the Federal Election Commission show Steyer's campaign paid The Govan Agency LLC a total of $43,548 between Oct. 31 and Dec. 4 for four months worth of work plus reimbursements. The purpose listed for the payments was "Community Building Services."

"Rep. Govan's compensation is consistent with the salaries of other members of the team in South Carolina," Lammers said.

Govan, an Orangeburg Democrat, said The Govan Agency LLC is a consulting company and Steyer is a client.

"For my services, I travel, I do surrogate work, I do advice on policy," he added. "And because of my expertise, in terms of having run, worked and been involved in campaigns I’ve run statewide, I would think my services for any candidate (would be valuable), and he’s not the only candidate to ask about my services."

Govan did not name any other campaigns he has worked on, statewide or otherwise.

Steyer's South Carolina state director, Jonathan Metcalf, earned a monthly salary of about $7,000, according to the filings.

But Lammers said the discrepancy between Metcalf's salary and Govan's compensation stems the fact that Metcalf is an employee while Govan is an independent contractor. Federal rules require campaigns to report post-tax pay for employees but the pre-tax gross amount for independent contractors.

Harpootlian, a prominent Biden supporter who stumped for the former vice president in Iowa, said Govan told him shortly before endorsing Steyer that he planned to endorse Biden, alleging that the top black lawmaker changed his mind because of the financial payout.

"He told me he was with Joe Biden until Mr. Moneybags showed up," Harpootlian said. "This is what happens when billionaires get involved, whether its Donald Trump or Tom Steyer. They just buy things. They don't have to persuade anybody, they just buy them."

Govan said Harpootlian is only coming after him "because Biden is struggling coming out of Iowa." He called on the Biden campaign to renounce Harpootlian's endorsement.

While Govan said he considers Biden to be a friend, he chose not to endorse him in part because Harpootlian was supporting him.

Several members of the S.C. Legislative Black Caucus gathered in the Statehouse lobby on Wednesday to ask the Biden campaign to disavow Harpootlian's remarks, which they deemed as racist.

"We know Joe Biden needs the black vote in South Carolina," House Minority Leader Todd Rutherford told reporters. "He certainly can’t get it with this."

Rutherford noted that Harpootlian once said during a 1986 county council race that he didn't want to buy the black vote, he just wanted to rent it for a day.

Harpootlian then addressed reporters as black lawmakers looked on, with some jeering him as he spoke.

"I will not be silenced by those who use race as a shield from criticism," he said, noting that he was an early endorser of Barack Obama during the 2008 campaign and marched behind Martin Luther King's casket.

"I understand the pervasive, horrible impact of racism, and this allegation cheapens the effort of those of us who want to fight against it," Harpootlian said.

Paige Hill, a spokeswoman for the Biden campaign, said Harpootlian does not speak on the campaign's behalf — a point Harpootlian also made.

Harpootlian is one of dozens of South Carolina officials who have endorsed the former vice president, most of whom are black.

State Sen. Marlon Kimpson, an African American Democrat from Charleston, said he is one of thousands of Biden supporters across South Carolina.

"When you have one cowboy run off and say something and you attribute that to an entire campaign, I think that's unfair," Kimpson said.

The dispute comes as Steyer has been narrowing Biden's lead among African American voters in South Carolina, according to the most recent Post and Courier-Change Research poll. Biden had support from 30 percent of African American voters, compared with 24 percent for Steyer. Biden remains the front-runner among all S.C. voters.

This is not the first instance of this type of controversy in South Carolina. In 2007, Hillary Clinton faced a similar allegation that she had paid for the endorsement of state Sen. Darrell Jackson by hiring his media consulting firm.

In November, the Associated Press reported that a top aide to Steyer's campaign in Iowa privately offered campaign contributions to local politicians in exchange for endorsing him.

Seanna Adcox and Adam Benson contributed to this story.