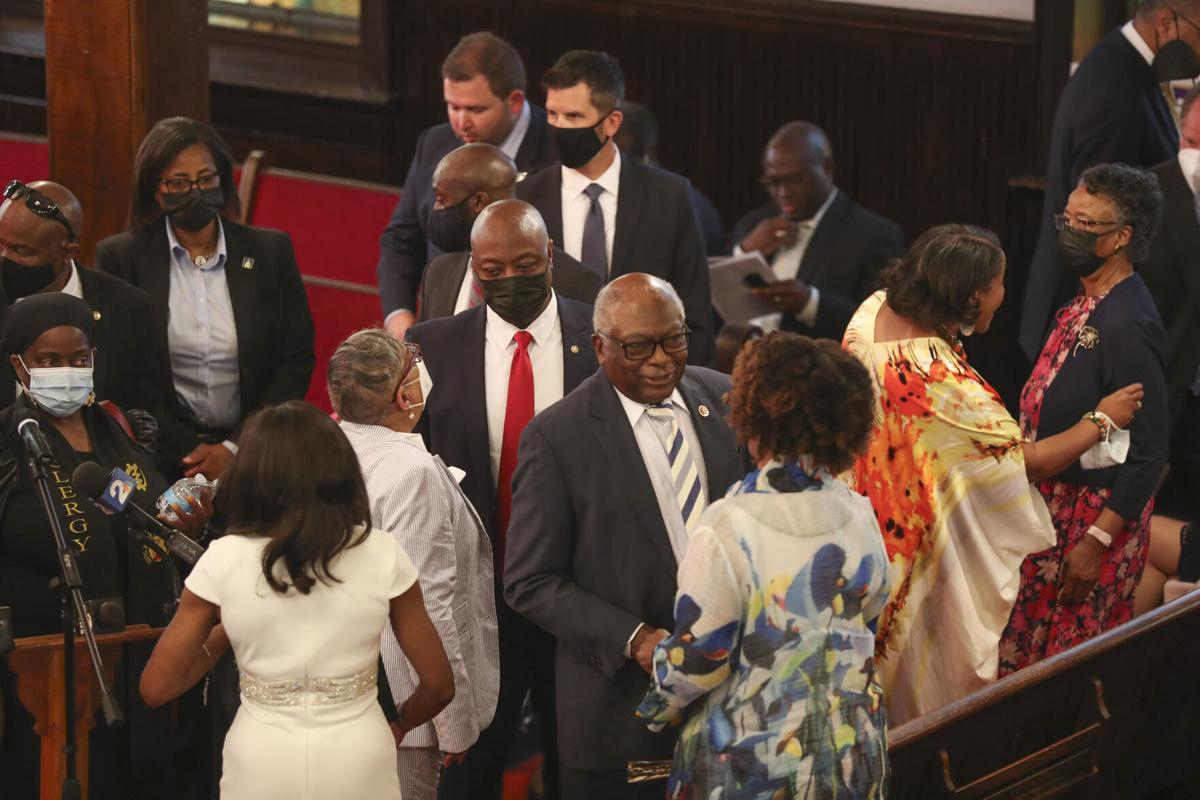 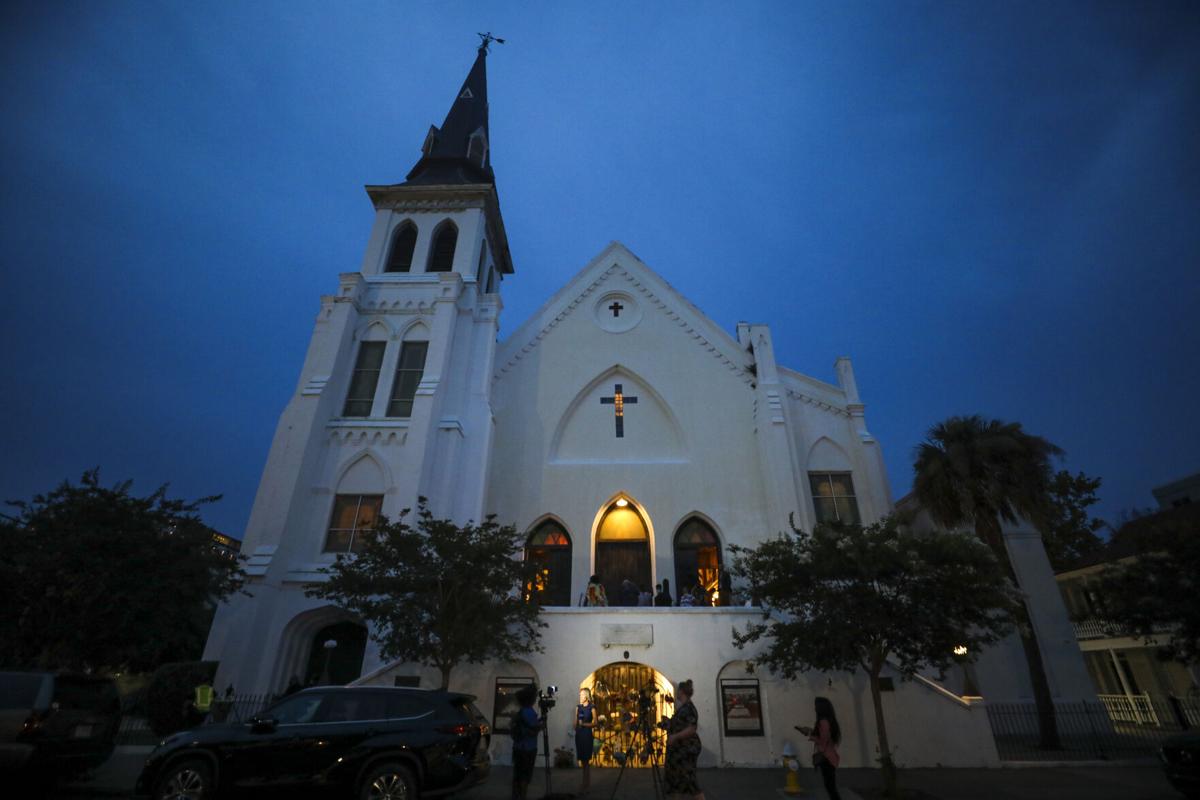 Churchgoers emerge from the front doors after the Bible study of Mark 4:1-20 at Emanuel AME Church in Charleston on June 17, 2022. Henry Taylor/Staff

WASHINGTON — The Senate's bipartisan gun safety bill, which has the backing of South Carolina's senior Republican U.S. Sen. Lindsey Graham, includes a pair of provisions that would address two issues of tremendous importance in the Palmetto State:

1. Closing the so-called "Charleston loophole" that allowed a young white supremacist to buy a gun on a technicality before going on a hate-fueled rampage inside a downtown Charleston church in 2015, and

2. Expanding the definition that determines which domestic abusers are barred from getting guns, an issue of significance in a state that ranks sixth-worst in the nation for women killed by men.

Graham was one of 14 Republicans, including Senate Minority Leader Mitch McConnell, who joined all 48 Democrats and two independents in advancing the bill June 21 for debate.

The 64-34 vote, which came hours after the release of the bill's text and with the backing of leadership in both parties, suggests  the gun safety measure has more than enough support to clear the 60-vote threshold needed to break a Republican filibuster in the evenly divided Senate.

"My goal from the start was to have a constitutional system that can intervene in time to stop unstable, mentally ill (individuals) from obtaining firearms and killing innocent people," Graham said in a media statement. "The legislation is not perfect, but we must not let the perfect become the enemy of the good."

In a statement provided to The Post and Courier on June 22, Scott suggested there was not adequate time to review and fine-tune the 80-page bill ahead of the procedural vote to advance it.

"The tragedies we've mourned as a nation serve as a painful reminder of the consequences of our inability to engage in a meaningful and honest debate on the issue," Scott said. "Sadly we were yet again denied the opportunity to have that conversation, with no time to review, openly discuss and improve the legislation."

While there were aspects of the bill Scott supported, like increasing resources for school safety and mental health, he said there were "certain concerns" he could not resolve in "such a short period of time." The senator's office declined to elaborate when pressed for more specifics.

The 80-page bill, called the Bipartisan Safer Communities Act, would strengthen background checks, including for the youngest firearms buyers, require more sellers to conduct background checks and beef up penalties on gun traffickers.

Lawmakers who worked on the package have said they hope to see its passage out of the Senate before the chamber breaks for a two-week July Fourth recess.

If it becomes law, the proposal would represent the most significant legislation to address gun violence since the 1990s, when Congress prohibited assault-style firearms.

One of the provisions in the Bipartisan Safer Communities Act can be traced directly to Charleston.

In an area covering juvenile records, the bill states authorities would have up to 10 business days to review both the juvenile and mental health records of gun purchasers who are under age 21.

That proposed guardrail hits especially close to home for the Charleston community, where a white supremacist in 2015 shot and killed nine Black parishioners at Emanuel AME Church during a Wednesday night Bible Study with a gun he should never have been able to get.

The killer, who was 21 at the time, had an arrest record for drug use — a prohibiting factor that should have barred him from buying any gun. But under federal law the gun sale was able to move forward because the FBI background check was not completed within three days. The gap is now known as the "Charleston loophole."

It's a more narrow framework than past proposals introduced by House Majority Whip Jim Clyburn, D-S.C., who for the last five years has introduced legislation in the House to expand the FBI background check period to 10 business days for all who want to purchase a firearm.

On the seven-year anniversary of the shooting at Emanuel AME Church, Clyburn and Scott gathered at the church for an event commemorating the day.

In an op-ed in The Post and Courier, Clyburn urged action.

"We have an opportunity to enact meaningful laws to address the epidemics of gun violence and white supremacy. We have all heard the saying that 'where there is a will, there is a way.' The public will is strong and overwhelmingly in support of action," Clyburn wrote. "Let’s develop ways to prevent being condemned to repeat our past mistakes and make our communities safer for everyone."

In addition to taking steps to address the Charleston loophole, the Senate legislation would also, for the first time, seek to close the so-called "boyfriend loophole" by expanding current law to prohibit dating partners or recent dating partners convicted of domestic violence from purchasing a firearm.

Under the current allowance, only convicted domestic abusers who have been married to, lived with their victim or have had a child with them are barred from purchasing firearms. That oversight has long excluded boyfriends, girlfriends, longtime partners and also estranged former partners and lovers.

SC reverts to 6th-worst in the nation for women killed by men, a new report shows

That could be especially significant in South Carolina. According to the annual “When Men Murder Women” report published Sept. 28, South Carolina ranked No. 6 in the nation for for women killed by men — a discouraging statistic that comes despite its 11th-place grade in 2018, which at the time had spurred hope that South Carolina had reached a turning point in its persistent domestic-violence death rates.

Guns play a significant role in these deaths.

According to the report, 40 percent of South Carolina’s total cases arose from arguments between the victim and her killer. Of all of the slayings, nearly 79 percent of the women were killed with guns.

The Senate proposal would also funnel millions to help states implement so-called "red flag" laws that will let authorities temporarily confiscate guns from people who may pose an imminent threat to themselves or others, an idea Graham has urged states to adopt.

It also would disburse money to states and communities to improve school safety and mental health initiatives.

Graham, who was one of 10 Republicans in a bipartisan group that sought to hammer out the details of the Senate's gun reform package, said in a statement that the bill strikes the right balance in addressing problems without infringing on constitutional rights.

While the Palmetto State's senior senator said he believes the legislation has "a very good chance of saving lives while at the same time protecting the rights of responsible gun owners" he also acknowledged the bill "will not magically solve all of our problems when it comes to gun violence."

"Deranged individuals who are intent on killing and maiming others will find ways to accomplish their hateful objective. However, I do think there is a greater likelihood this legislation will help us avert a mass killing than prevent a law-abiding citizen from losing their constitutional right to keep and bear arms," Graham said.

Graham, who is a gun owner himself, also stressed, "Unless you're adjudicated (as) mentally ill or a convicted violent criminal, your Second Amendment rights won’t be affected."

The full Senate could vote on passing the measure in the next few days. It's then expected to pass in the Democratic-dominated House.