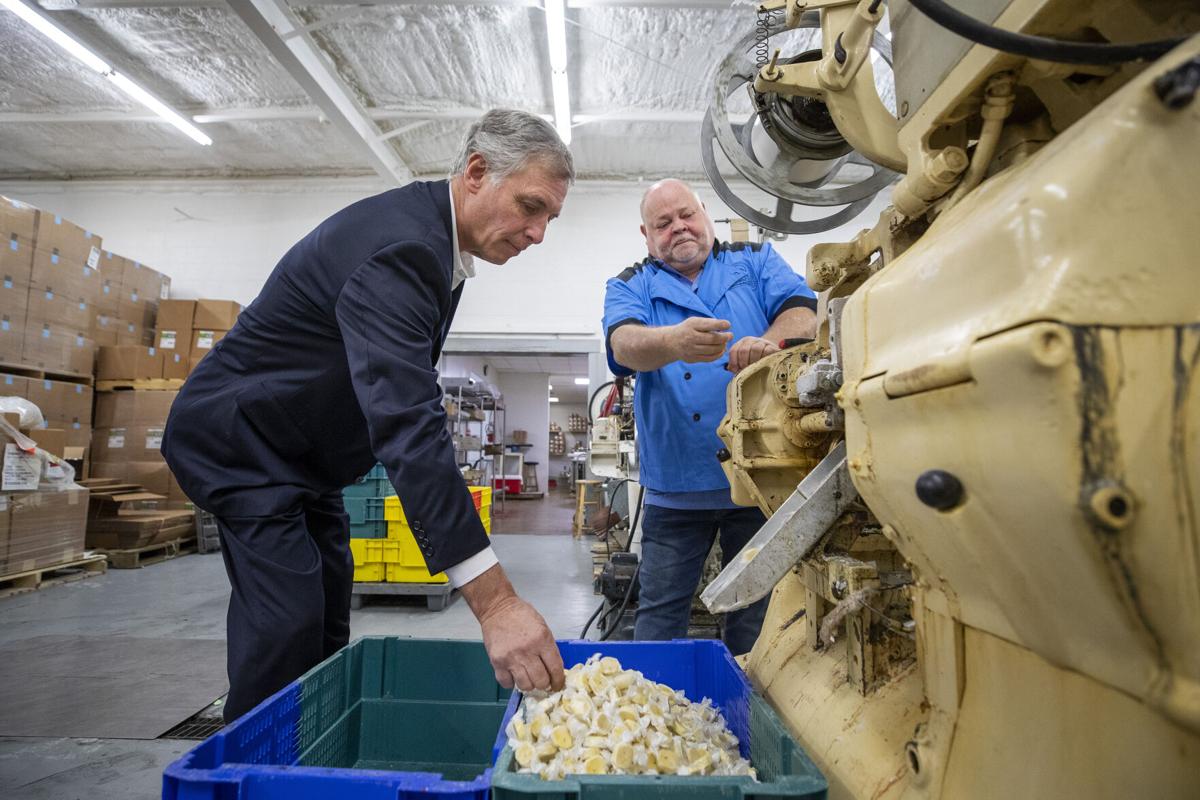 U.S. Rep. Tom Rice grabs a piece of taffy as he gets a tour of Canipes Candy Citchen from one of the owners, Butch Canipe, on Monday, Nov. 8, 2021 in Longs. Lauren Petracca/Staff 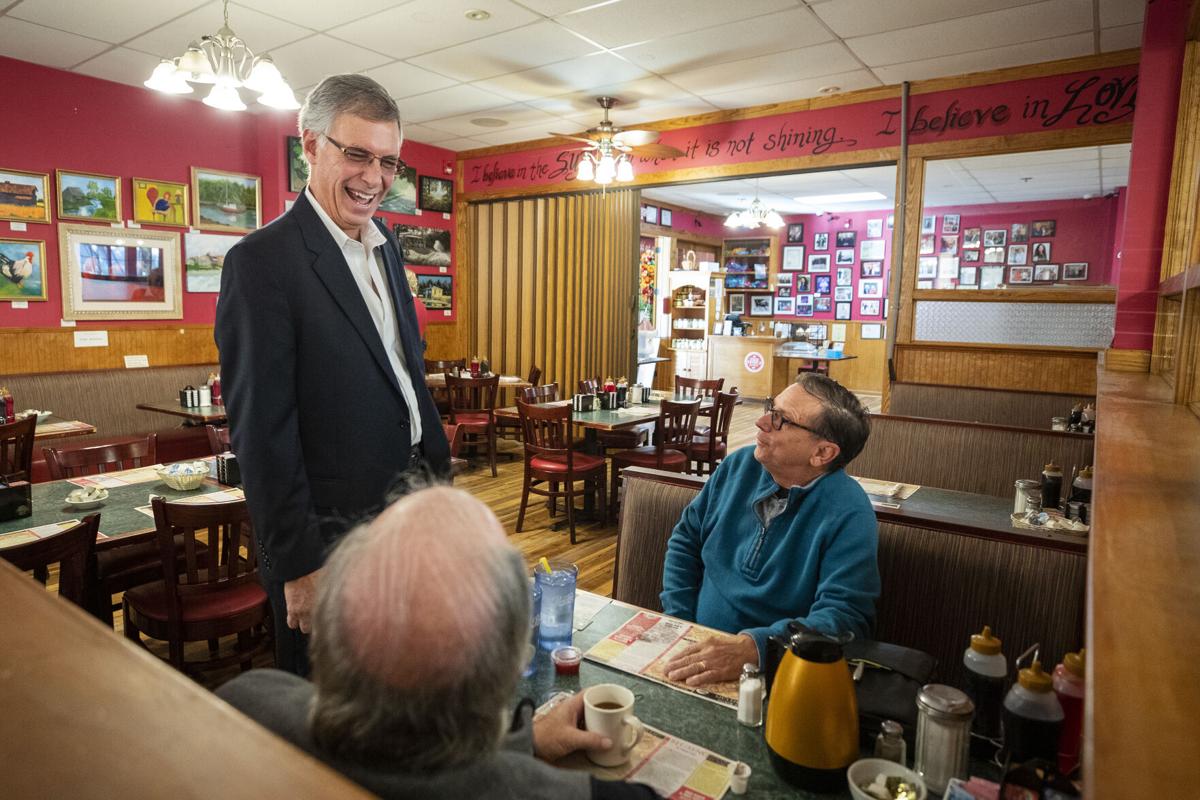 U.S. Rep. Tom Rice stops to talk with Randy Liposky (left) and Jeffrey Herwig (right) during a stop on a tour to kick off his reelection campaign on Nov. 9, 2021, at Applewood House of Pancakes on Pawleys Island. Lauren Petracca/Staff 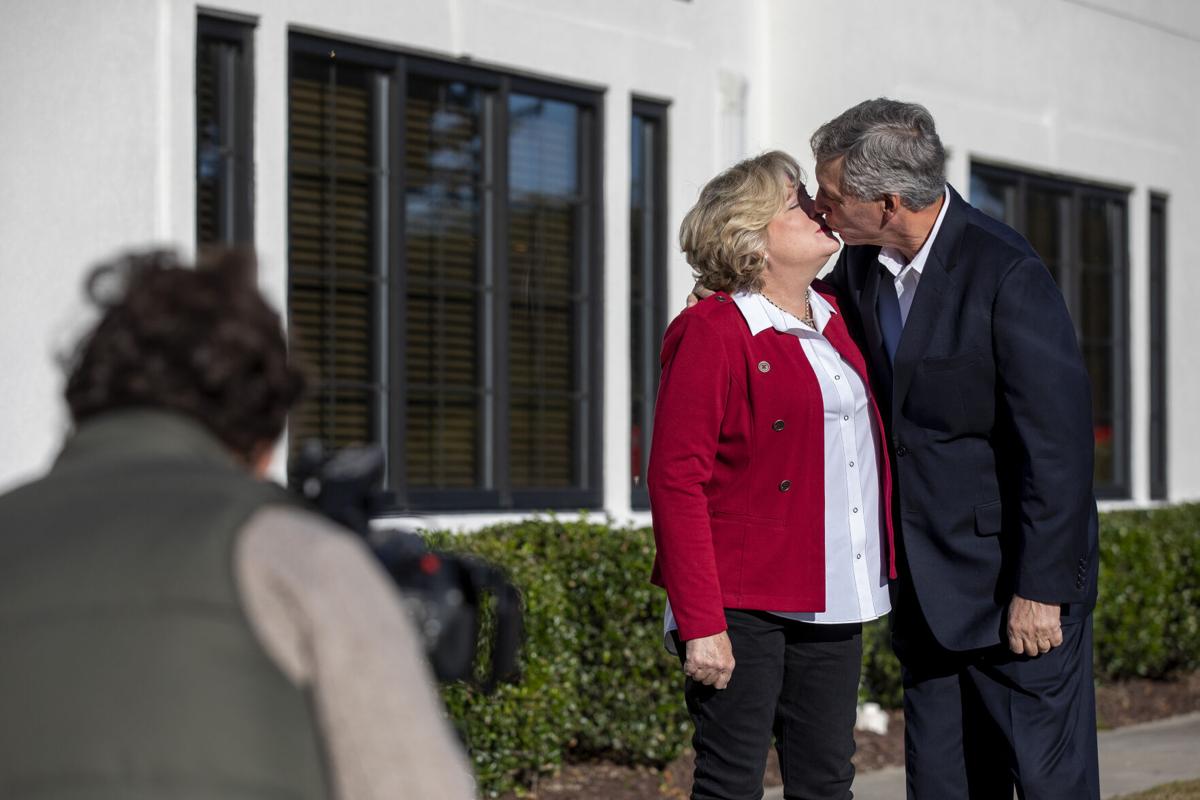 U.S. Rep. Tom Rice kisses his wife, Wrenzie Rice, as a videographer for his campaign films outside of Applewood House of Pancakes on Pawley’s Island during a stop on a tour to kick off his reelction campaign on Tuesday, Nov. 9, 2021. Lauren Petracca/Staff 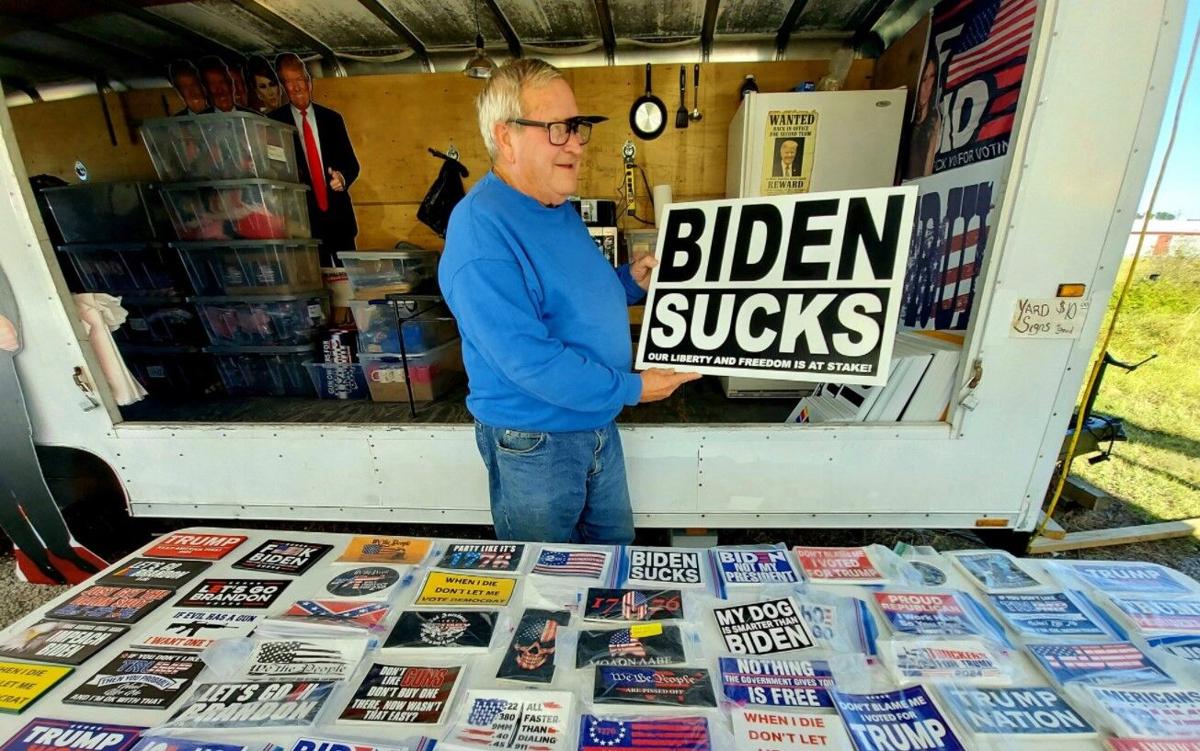 U.S. Rep. Tom Rice grabs a piece of taffy as he gets a tour of Canipes Candy Citchen from one of the owners, Butch Canipe, on Monday, Nov. 8, 2021 in Longs. Lauren Petracca/Staff

U.S. Rep. Tom Rice stops to talk with Randy Liposky (left) and Jeffrey Herwig (right) during a stop on a tour to kick off his reelection campaign on Nov. 9, 2021, at Applewood House of Pancakes on Pawleys Island. Lauren Petracca/Staff

U.S. Rep. Tom Rice kisses his wife, Wrenzie Rice, as a videographer for his campaign films outside of Applewood House of Pancakes on Pawley’s Island during a stop on a tour to kick off his reelction campaign on Tuesday, Nov. 9, 2021. Lauren Petracca/Staff

FLORENCE – Tom Rice is quiet, but he likes to drive fast.

Just 20 minutes into meeting voters at a Pawleys Island breakfast spot, the five-term congressman is en route to a candy factory in his native Horry County to meet with the owners in front of the state and local press. He was 15 minutes late, but not because of his haste: He had stopped to phone in to a local radio station.

While the interview was just a small part of the 12-hour, eight-county tour of the district announcing his reelection, every minute counted. After a half-hour in the factory taking questions and talking shop, Rice was on the move again, staff and family piling into his white Nissan SUV for a speaking appearance at a local Rotary Club meeting at the Hotel Florence, a business he had personally helped secure tax credits to restore nearly a decade earlier.

He whips around a slow-moving garbage truck on the highway with his photographer close behind and hits the gas, looking to make up the few spare minutes lost by lingering a moment too long in Longs. And every moment matters: After addressing the club, Rice is whisked into the adjacent garden and opens a script on his phone, a script of bite-sized talking points from the economy to protecting the Constitution, to be recorded and repackaged for future campaign ads.

“I’m not going to remember all of this,” he tells his communications director, looking up from his phone and lowering his glasses.

“They’re just suggestions,” she advises. Things he would say unscripted to any crowd. And already had.

In that way, Rice is already well-figured out. In his near-decade in Congress, the former CPA and tax lawyer has carved out a quiet niche in Washington perfectly suited to his measured personality. He serves as a member of the influential — if arcane — House Ways & Means Committee, a contributing member of the moderate Problem Solver’s Caucus, a steady legislator who prefers subtlety and compromise to the bombastic statements and public profile of more outspoken Republican colleagues like Matt Gaetz, Jim Jordan and Louie Gohmert.

But Rice, who has won reelection by double-digit margins every year he’s run, has a target on his back. The lawmaker known for keeping his head down gained notoriety nationally for his role as one of 10 Republicans who voted to impeach President Donald Trump over his role in the Jan. 6 riot at the U.S. Capitol.

The South Carolina Republican Party censured him and conspicuously left him off the guest list for its “First in the South” conference in Myrtle Beach Oct. 29 and 30. Meanwhile, challengers like S.C. House Majority Whip Russell Fry have raised hundreds of thousands of dollars against him while others — like conservative media personality Graham Allen — have secured endorsements from Trumpian politicians like North Carolina congressman Madison Cawthorn and planned rallies with right-wing politicians like Gaetz and Georgia congresswoman Marjorie Taylor Greene. All have painted Rice’s vote against the former president as a betrayal of the Republican base.

To Trump supporters, it’s a black mark on his record, a point Rice didn’t shy away from. At the Florence County Rotary Club and in front of workers at a textile mill in Darlington County, Rice brought up his impeachment vote unprompted, calling on his constituents not to turn a blind eye to the alleged crimes of the former president and instead, put stock in the conservative values he had long sought to represent.

“We need to embrace conservatives, not-so-conservatives, the independents and maybe try to pick a few off the left, because I believe our ideas are better than theirs,” Rice told reporters in Longs. “I think the proven strategy of smaller government, less taxes, more freedom is what makes us the greatest country on earth.”

In Florence, he talked about securing historic preservation tax credits that had helped revitalize its downtown. In Horry and Darlington counties, Rice discussed federal trade policy and disaster relief funding that helped assuage the hardships of the COVID-19 pandemic and the devastation of Hurricane Florence. He talked about his involvement in writing major tax reform legislation in 2017, and in a visit to Dillon County, he discussed his role in bringing an inland port to the region, which in turn created more than 1,000 jobs since it opened in 2016.

“That’s what I represented,” Rice told The Post and Courier on a campaign stop in Pageland. “I didn't represent IBM or GM or GE, I represented the guy who's going to open a restaurant or open a hotel.”

But Rice — who voted with Trump 94 percent of the time over the past four years, according to FiveThirtyEight — voted counter to what some of the loudest voices in the Republican base value most: an enduring loyalty to the former president. According to a Nov. 2 Morning Consult poll, Trump holds a favorability rating of 84 percent among Republicans nationally and in other polls substantially outpaces all possible contenders in a 2024 Republican primary.

He also elicits intense loyalty from conservatives with a distrust of both parties. On the way through Darlington, Rice’s route passed by Lynn Newsome’s “Trumpville in the Carolinas,” a sprawling roadside stand featuring Trump and Confederate flags, hats, bumper stickers and memorabilia denigrating both Republicans and Democrats. “I’m about Trump,” Newsome told The Post and Courier. “I’m not about Republicans. I’m not about Democrats.”

If Rice showed up to talk, Newsome, a Graham Allen supporter, said he would have asked him to leave. Not just for his vote, he said, but for the establishment Rice purportedly represents. And the same one rioters sought to upend in the violent uprising that aimed to overturn the results of the 2020 election.

“Don't let this scare you,” Newsome said. “But what I feel about Jan. 6 is that they didn't go far enough. They should have gone right on through the building.”

Entering his 2022 reelection campaign and the potentially decisive June GOP primary, Rice finds himself in a good position even as he sits on Trump's 10-person punishment list. He holds deep-seated ties to his state and his district, consistently won reelection by healthy margins, and has maintained a consistent fundraising operation while other opponents of Trump impeachment candidates have seen their totals diminish. Backed by corporate money and reliable donor support, Rice holds a war chest $1.2 million larger than that of his top three challengers combined, according to campaign finance reports. And he’s made powerful friends over the last decade.

“People perceive that there’s blood in the water, but I don’t see that,” said Tim Norwood, former chairman of the Florence County Development Corp. and a longtime Rice supporter. “I get aggravated by people who say that Tom didn’t support Trump, that he left the Republican Party. But he didn’t. He supported everything he did. The challenge we have is that Trump did something wrong, and should be held accountable. Tom was an independent thinker, and that’s what I want. I want someone who makes their own decisions.”

The primary question for Rice now is the enduring importance of Trump to the Republican base, and whether his impact on the party will be as powerful an influence as those who redefined the GOP during the early days of the Tea Party movement, when numerous incumbent Republicans were overrun by right-wing opponents.

“When we started, I told him the bad news first, which was that he was down 60 points to six,” Pudner recalled in an interview.

His candidate also faced a massive deficit in fundraising. But public mistrust in Congress and institutions, he said, polled extremely well, and represented a message more powerful than anything any candidate could pay for. In overcoming Trump’s influence, Pudner said Rice needs to find a way to demonstrate his value to conservatives in a way that not only motivates them to vote for him, but reaffirms he is on their side.

Right now, leadership on both sides is making that difficult. "I think Nancy Pelosi is a very fractious leader," Rice said. "I think Republican leadership is pretty fractious, too. It's too much about politics and not enough about solving problems."

"It's like a bunch of kindergarteners," he said. "We're supposed to be leaders."

Whether Rice — a quiet voice in a raucous campaign — can cut through the noise might be his biggest challenge. But he plans to try. Prior to the COVID-19 pandemic, Rice averaged 50 town halls a year, and favors small, intimate events to large-scale media blitzes. Entering the 2022 campaign season, he plans to hold that strategy.

“I don't know how to do anything different,” he said.