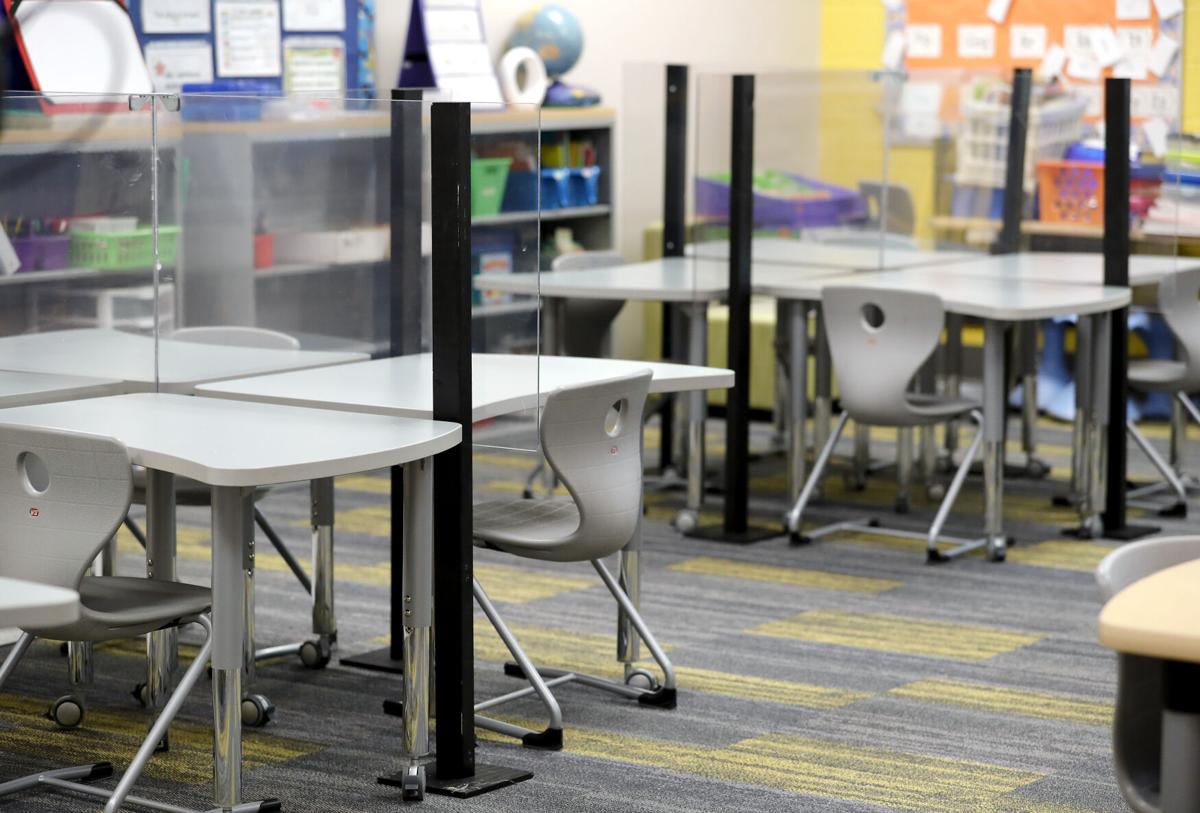 Matilda F. Dunston Elementary School in North Charleston was prepared by the Charleston County School District with coronavirus safety measures when schools reopened for in-person learning in the fall. State Superintendent Molly Spearman is working to get more students back in the classroom, saying that many children learning from home are are "the ones who need to be in school the most." File/Grace Beahm Alford/Staff 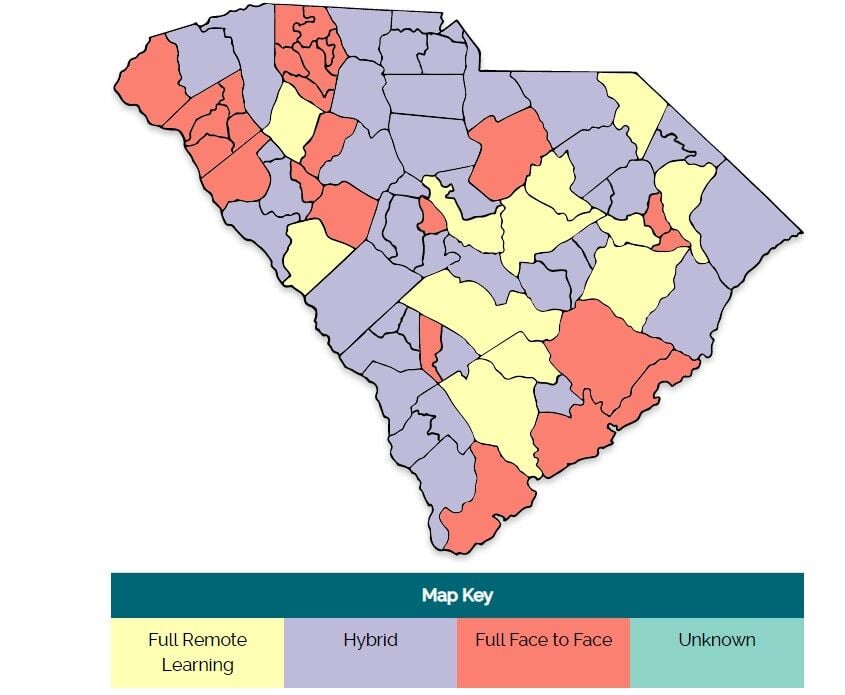 The state Department of Education updates on this map how students are learning in every district, with yellow meaning students are fully remote. This is a screenshot from Thursday, Jan. 29, 2021. 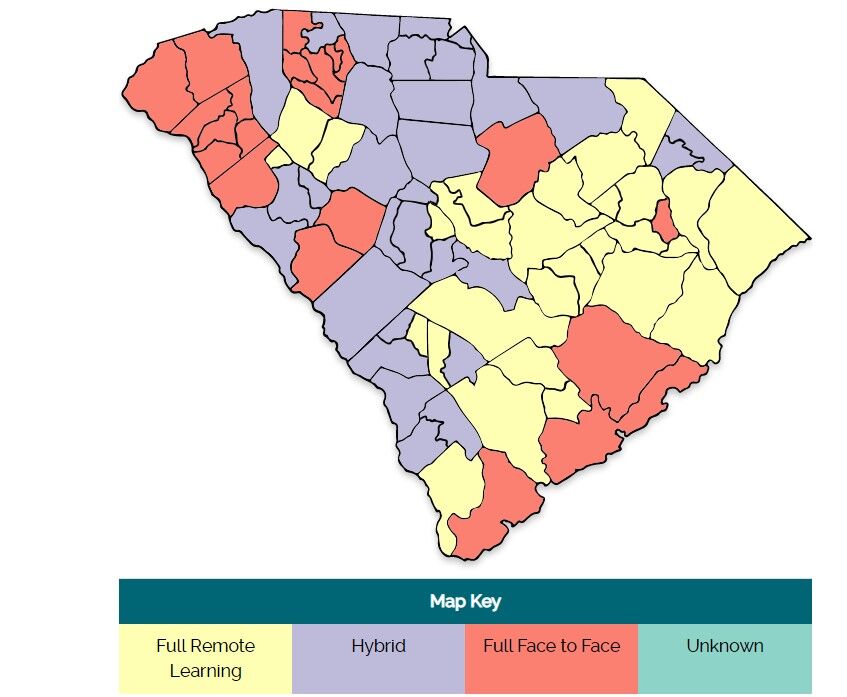 The state Department of Education updates on this map how students are learning in every district, with yellow meaning students are fully remote. This is a screenshot from Wednesday, Jan. 13, 2021.

COLUMBIA — A map of South Carolina school districts' "operational status" paints a stunning and, to many, frightening snapshot of how the pandemic will almost certainly worsen this state's already gaping education disparities.

Districts in yellow, signifying all students are learning from home, are largely along Interstate 95, in the so-called Corridor of Shame, as labeled by a 2005 documentary about the plight of South Carolina's poor, rural schools.

"Many of those children are the ones who need to be in school the most," state Superintendent Molly Spearman told a Senate panel Wednesday. "They’re in poverty. Some of them we haven’t seen since March. That’s scary.

"I need your support in pushing these local school boards to get back into school," she told senators, a week after making a similar request to a House panel.

Options include legislation requiring it — a debate legislators have promised will happen — and giving teachers priority for the state's limited COVID-19 vaccine supplies, a request that so far has been rebuffed. Currently, teachers are part of the next eligibility phase, which may still be months away.

There are about 59,000 public K-12 teachers. Getting all other school district employees vaccinated, including classroom aides, bus drivers, and cafeteria workers, would add about 64,000 more to the request, according to the state Department of Education.

Getting shots in teachers' arms will "relieve the fear factor," Spearman told senators.

As of last week, 12 districts were operating fully virtual, 24 districts were offering a full week of learning inside a classroom, and the other 43 offered a weekly mix of in-person and online education. It's an improvement from a week earlier, when 19 districts were fully remote, Spearman said.

But the goal needs to be every district offering five days inside the classroom — as quickly as possible, she said.

Sound familiar? Last July, Gov. Henry McMaster called on every district to give parents the option to send their children to school daily and asked Spearman, a fellow Republican, to back him up in enforcing it.

Six months later, amid far higher case counts, the two are singing from the same hymnal, with only a slight difference in the tune. While McMaster's reasoning has always been about both education and the economy — getting students in school so parents can work — Spearman's plea focuses solely on the children. But their conclusion is the same.

For months, the mantras against reopening have been to stay "virtual until safe" with decisions that "follow the science."

Teachers against returning to the classroom have noted that McMaster forced schools to close in March when there were less than a few dozen people diagnosed with COVID-19 statewide, and no South Carolinian had died of the disease yet. Returning to school with thousands of newly diagnosed cases daily made no sense, they said.

But what's changed is what the science has revealed about the virus over the last year, and what's been learned about mitigating spread. Following the data is what's convinced Spearman that "school is safe," she told legislators.

"Fear is out there," she said, but fear is not science.

"We need to manage by the data, and the data says it’s safe," she said. "You’re better off to be at school than going to church or going to the grocery store."

That's not to say schools are COVID-19 free.

More than 8,800 students and faculty have tested positive while regularly attending in-person activities since the state's public health agency began reporting COVID-19 cases in schools in early September. They represent 3 percent of all South Carolinians diagnosed with the virus in that time.

A growing body of research, including a study in Charleston public schools, shows most cases linked to schools are contracted elsewhere and, when the virus is transmitted in schools, students aren't the ones spreading it.

Allison Eckard, an infectious disease pediatrician working with the Charleston district, found that only a handful of its 500 students and employees diagnosed with COVID-19 last semester "may have been transmitted" within the schools.

Editorial: We know it's important to get SC kids back in class. Now we know it's safe.

"There have been cases, there's no doubt, but the majority of them have been acquired outside of the classroom. The ones that did happen inside the classroom most often involved a teacher giving it to a teacher or a teacher giving it to a student," said Eckard, a doctor with the Medical University of South Carolina Children's Health, working with a team of school nurses tracing each case.

"And I have no examples of students giving it to teachers — the thing that everybody was so worried about," she said in a MUSC internal publication Jan. 19 about her study.

Researchers at Duke University working with 11 school districts in North Carolina reached similar conclusions. Contact tracing determined that among 90,000 students and staff attending in person, 32 of the 805 diagnosed in a nine-week period contracted the virus at school, and none of those were transferred from child to adult, according to the study published Jan. 8 in Pediatrics.

Eckard said she was shocked by her own research.

"I really was just not in favor of this initially," she said. "And now I am a believer. Kids need to be in school, and it's safe."

Part of what makes school safe are the safety protocols, Spearman said. Unlike in the community at large, mask wearing — something actually discouraged by doctors when McMaster ordered the shutdowns last March — is easier to enforce inside a school building, and tens of millions of dollars have been spent statewide on safety efforts such as plastic partitions and regular sanitizing.

The ability to be safe is there, if the adults making the decisions about children's learning make the effort to make it happen, lawmakers contend. McMaster has summed it up as "where there's a will, there's a way."

"Over the last nine months, we've learned enough we can do this safely, but we've got to have children in the classroom," said Senate Majority Leader Shane Massey, R-Edgefield. "This is one area in education where they can't say they don't have enough money. There's been a ton of money pumped in for COVID safety and security and cleaning."

The available spending has included $84 million in federal aid that legislators last September approved sending to school districts for safety measures, school nurses, tutoring and technology. That's on top of the $10 million worth of safety features the state Department of Education provided to any district requesting the help last summer.

Editorial: Move SC teachers to the front of the COVID-19 vaccine line

And that's in addition to the $195 million allocated directly to South Carolina districts last spring in Congress' first round of COVID-19 aid, which gave them two years to spend it. Districts draw down their share of that as reimbursements after submitting paperwork to the state. As of this month, just 39 percent of it had been requested, according to Spearman's agency.

How much districts have used of that spring allotment range from Lexington-Richland 5 that covers Irmo and Chapin, which spent nearly all of its $1.6 million share within a few months, to Richland Two in suburban northeast Columbia, which has requested none of its $4 million, according to the state agency.

Harry Miley, Richland Two's chief financial officer, said Thursday the district has spent about $1 million of it, mostly on personal protective equipment and plastic partitions, but just hasn't submitted the paperwork to be reimbursed. Roughly $500,000 in tutoring services will also be paid from that pot, but the district hasn't been billed for that yet, he said.

Charleston County, among districts that have been offering a full week of learning, had gotten 43 percent of its $13.4 million by year's end. The spending included virtual school salaries, air filtration systems, plastic partitioning, sanitation supplies, according to the district.

An even bigger windfall is coming.

The aid package Congress passed last month provides at least $846 million directly to South Carolina school districts, with an estimated range of $1 million for tiny Clarendon 3 in Turbeville to $72.6 million for Charleston County.

Spearman is requiring districts to submit plans for how they'll use that money to catch students up, to include tutoring, longer school days and summer camps.

Remote learning is possible with other federal aid, which is paying for more than 90,000 hotspots to provide internet access for students who had none; 19,000 devices are still on back order.

But in reality, with a device or not, it's only "sorta" working. Technology can't make up for students being in a classroom with a teacher, she said.

"Even in the best situation, if you’ve got a parent who understands technology sitting there, it’s still hard for students. Students do best when they’re in the classroom. The younger they are, the more they need to be there."

Her own granddaughter is a good example.

Four-year-old Molly started the school year in virtual preschool. A picture taken while class was going showed the 4-year-old sitting under the table, not even looking at the screen.

"Imagine that with two college-educated parents and a child who really knows how to maneuver the screen, and it wasn't working," Spearman said.

Second round of federal aid to schools

The second round of federal COVID-19 aid passed by Congress last month sends $940 million to South Carolina for public K-12 education. The state education agency can keep up to $94 million of that for statewide efforts. The rest will be doled out to school districts, based on student population and poverty levels. Here are estimates of what some districts will get: