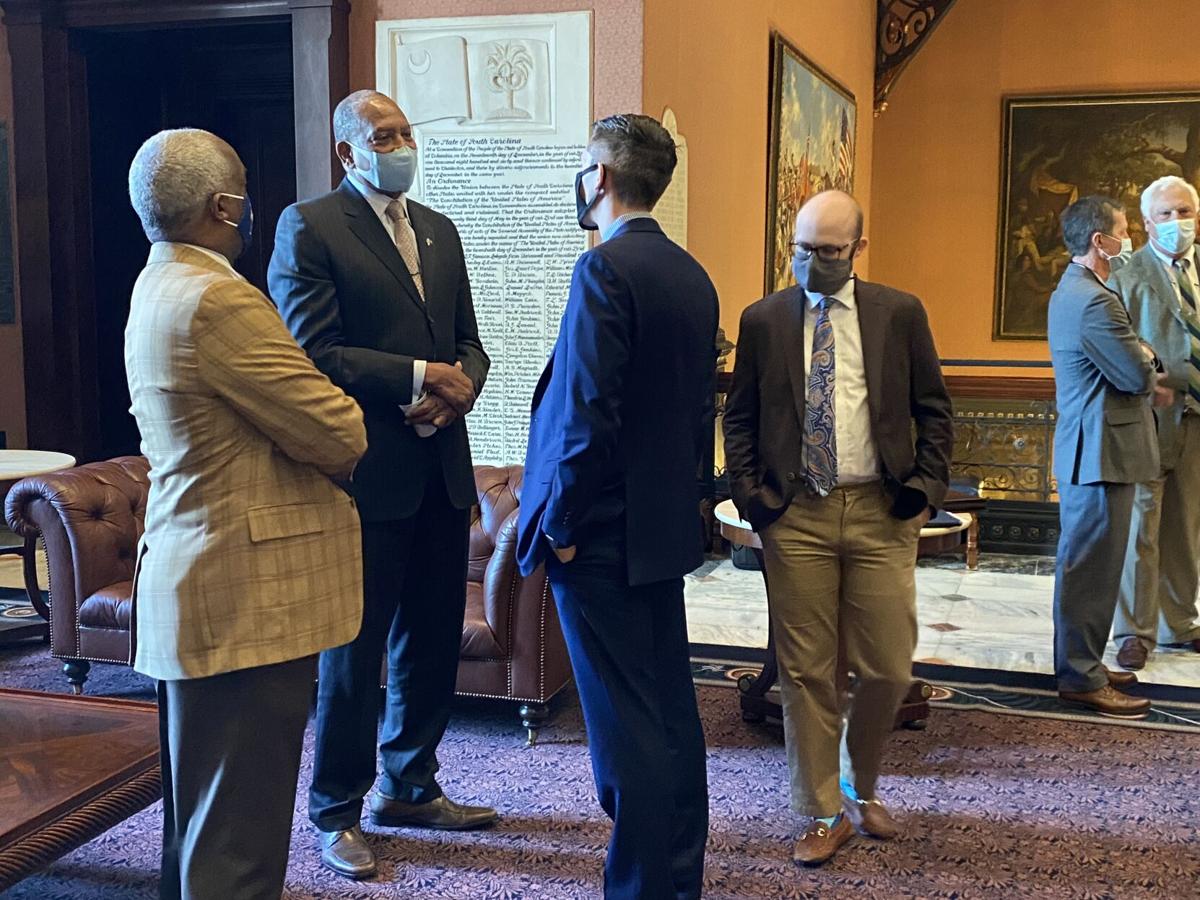 Alex English, a former NBA and University of South Carolina basketball star, talks to lawmakers in the S.C. Statehouse lobby on Feb. 25, 2021. English is seeking to hold on to his seat on the university's board of trustees. File/Jamie Lovegrove/Staff 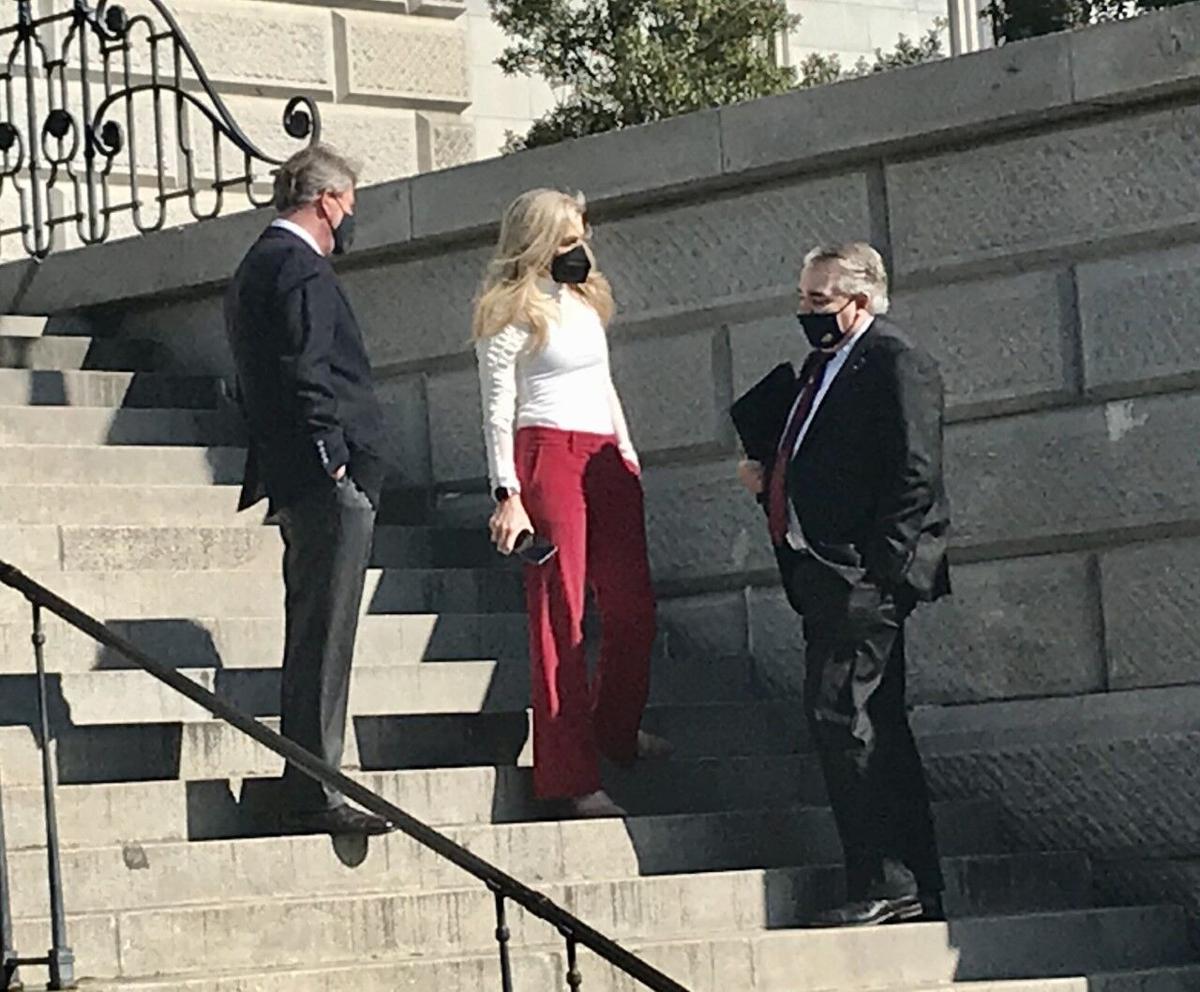 COLUMBIA — A few weeks after judicial elections inflamed racial tensions in the Statehouse, a contested race for a spot on the University of South Carolina's board of trustees threatens to exacerbate the issue, as some lawmakers have criticized efforts to oust one of the only Black trustees from his post.

Alex English, a Columbia native who became the Gamecocks' all-time leading scorer before a 15-year Hall of Fame career in the NBA, was appointed by Gov. Henry McMaster in June to fill the USC board seat representing Richland County held by William Hubbard, who left after being named dean of the law school.

English is seeking to finish the board term that runs through mid-2022 in legislative elections set for March 3, but faces competition from Robert Dozier, a top executive at First Reliance Bank.

The race became increasingly tense over the last week as some lawmakers fretted over the implications of removing English, one of only two Black trustees on the 20-member USC board along with Rock Hill attorney Leah Moody. Dozier is White.

While South Carolina’s population is 27 percent Black, the student body on USC’s main Columbia campus is less than 10 percent Black.

The USC board race comes just a few weeks after the only four Black candidates in the Legislature's two dozen judicial races all lost to White opponents, prompting outrage from Black lawmakers over the lack of diversity on the bench.

They were particularly upset over the defeat of Circuit Court Judge DeAndrea Benjamin, the wife of Columbia Mayor Steve Benjamin, in her bid for a promotion to the appeals court after the race became unusually partisan following attacks from a conservative group led by Republican and former gubernatorial candidate John Warren.

State Sen. Darrell Jackson, one of the legislators who expressed disappointment over the outcome of the judicial races, said English's defeat would be even worse because of how iconic he is in the USC community, particularly for Black students and alumni who have not always felt welcomed on campus.

"If he loses, it will be one of the most embarrassing things I've experienced since I've been up here," said Jackson, D-Columbia, who has served in the Senate for almost three decades.

To understand what English represents, Jackson said, lawmakers need to think about the significance of his 1972 decision to attend USC in the first place.

Jackson was a freshman at Columbia's Dreher High School at the time when English graduated from there amid race riots and concerns about how USC was treating Black students.

Like several other English supporters, Jackson said he likes Dozier and believes he would be a strong contender for a USC board seat in any other year but said he has told him that this race is "bigger than him."

English is on his second stint as a trustee after serving four years as an appointee of Gov. Jim Hodges from 1999 to 2003. He worked as an assistant coach in the NBA and as director of player programs for the National Basketball Players Association. He also operated Wendy's restaurants around Columbia.

Dozier also previously spent two years on the USC board as president of the school's alumni association. He voted against hiring Bob Caslen, a retired Army general who ran West Point, as president in 2019. Some trustees did not like how the search became focused on Caslen and included lobbying by Gov. Henry McMaster for the general.

In an interview with The Post and Courier, English said he does think lawmakers should take race into account in light of the university's struggles with diversity and recent efforts to address them.

"I think I bring a different perspective, I bring diversity, I bring a person who loves his university and wants to see them be the best that we can be, and I'm just excited about the future and what we can do," English said, adding that he's been impressed by Caslen's efforts at the university so far and wants to help him moving forward.

Part of the controversy in the race stems from efforts by some students on campus to rename the Strom Thurmond Wellness and Fitness Center on campus.

The building is named after South Carolina's former U.S. senator and governor who ran for president in 1948 on a platform opposed to civil rights for African Americans and continuously held up related legislation in Congress. Thurmond would later change his views on race.

English has expressed support for the effort, tweeting last year that he was signing a petition to rename the building. The effort has also won support from prominent figures like women's basketball coach Dawn Staley and the team's former star, A'ja Wilson.

English said he does not think that's an issue lawmakers should be taking into account because he's more focused on making bigger picture improvements to the university, like lowering tuition costs and bolstering diversity.

"Right now, that's not a priority for me and it's not a priority for the board of trustees," English said of renaming the Thurmond building. "It's an issue the students are having and that's something that when the time comes to have to talk about, I think we'll have a good debate about it. But I'm hoping it's nothing that affects me."

Even if the board of trustees does vote to rename the building, the change would still require legislative approval due to South Carolina’s Heritage Act, which requires a two-thirds vote in both the House and Senate to rename historical monuments, streets and buildings.

Dozier declined to weigh in on the issue.

"We are in the middle of a very defined legislative process," he said in a statement. "Out of respect to both the process and the members of the S.C. General Assembly that make the ultimate decision in Trustee races, it is best for me to decline comment at this time."

State Rep. Kirkman Finlay, the Columbia Republican who has been encouraging lawmakers to vote for Dozier, did not respond to requests for comment.

A third candidate initially in the race, Irmo businessman Kevin Hunter, told The Post and Courier he is no longer running.

During testimony before a legislative panel on Feb. 1, Dozier described himself as a "passionate Gamecock, 1990 graduate, who believes in the university."

"Having said that, I acknowledge that more work needs to be done so the University can reach its full potential in educating students and serving the state of South Carolina," he said.

Correction: The USC trustee election is for a term that ends in June 2022.