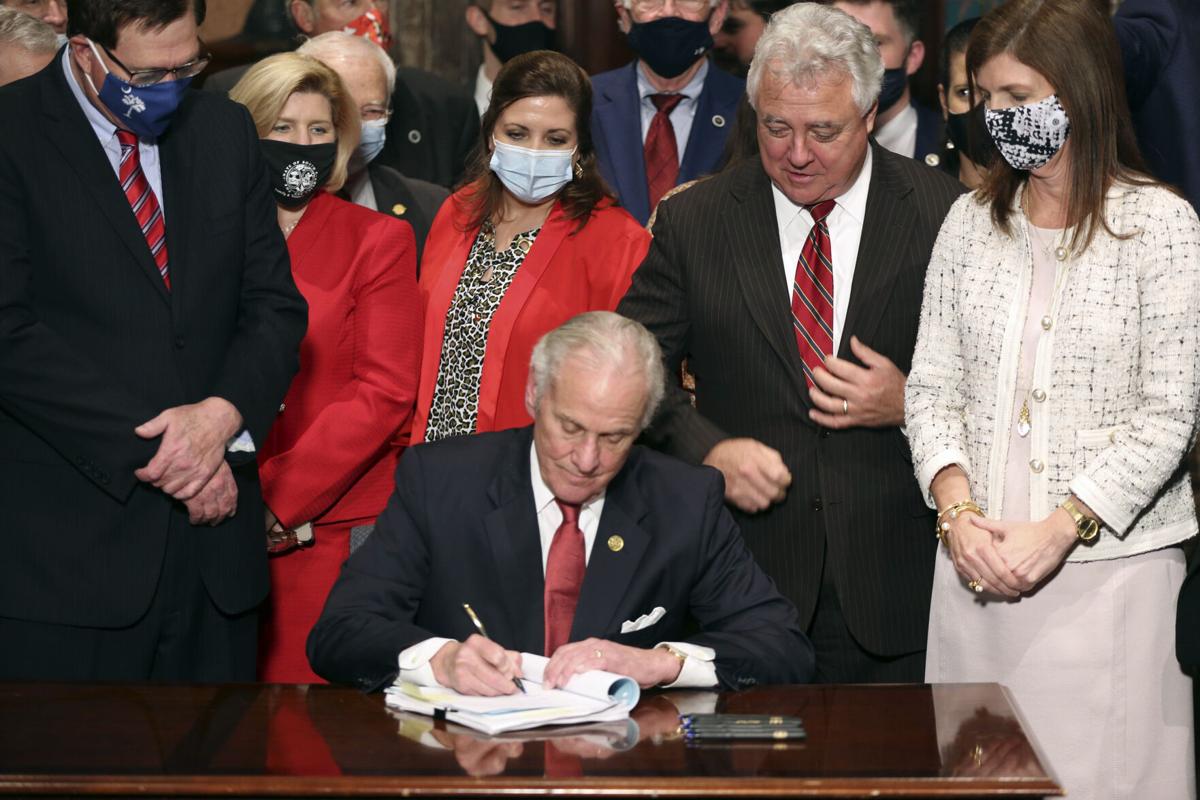 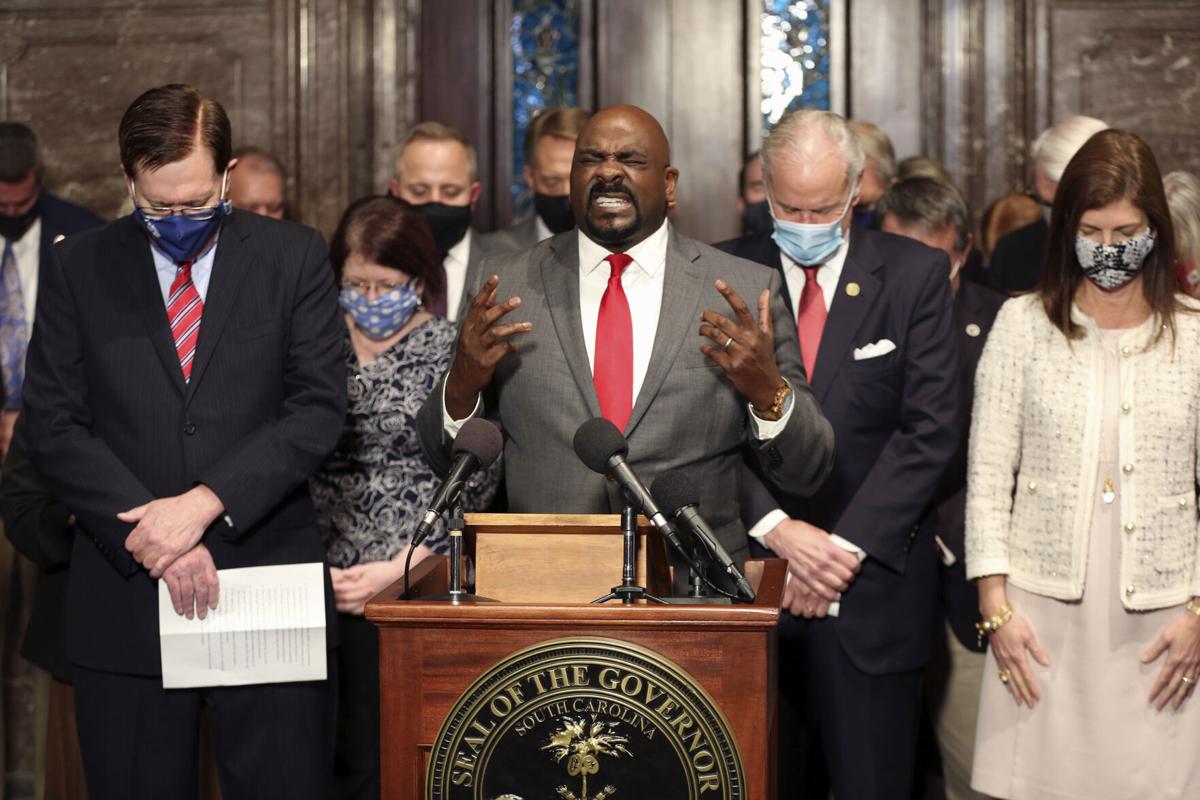 Greenwood pastor Tony Foster prays during a ceremony in which South Carolina Gov. Henry McMaster signed a bill banning almost all abortions in the state on Feb. 18, 2021, in Columbia. On the same day, Planned Parenthood filed a federal lawsuit to stop the measure from going into effect. Jeffrey Collins/AP

Even before McMaster signed the legislation, Planned Parenthood South Atlantic and the Greenville Women's Clinic announced they were already filing a federal lawsuit seeking to block it.

Those two organizations operate the only three abortion clinics in the state.

A hearing on the immediate request for a temporary restraining order to halt the bill is scheduled for 1 p.m. Feb. 19 at the federal courthouse in Columbia. Unless or until a court rules otherwise, the law is in effect, potentially putting scheduled abortion appointments in limbo.

State Attorney General Alan Wilson said his office "will vigorously defend this law in court because there is nothing more important than protecting life."

The legislation, known by supporters as the "fetal heartbeat" bill, bans abortions after around six to eight weeks of pregnancy. McMaster's signature adds South Carolina to close to a dozen other states that have approved similar bills, all of which have moved into court challenges.

Doctors who violate the law would be guilty of a felony, subject to a $10,000 fine and a maximum prison sentence of two years.

The House gave final approval to the bill on Feb. 18 by a vote of 74-39, almost entirely along party lines. Two Democrats voted for the bill and two Republicans voted against.

"This is a tremendous accomplishment for our state," Lucas said, adding that the bill will "save precious lives."

The governor's signing ceremony in the lobby of the Statehouse came just minutes after the bill was ratified by the Senate and House. It represented the culmination of a swift adoption process that took just over a month from the bill's first hearing this session.

In a broader sense, it capped a years-long effort by Republican lawmakers who had repeatedly been stymied by the Democratic minority in previous attempts to pass similar legislation. Republicans were able to move the bill through this year after expanding their Senate majority in the 2020 elections.

McMaster was flanked by dozens of lawmakers and other anti-abortion activists as he cheered the bill's passage.

"This day has been a long time coming," McMaster said. "Our battles are not over, yet I believe the dawn of victory is upon us."

The women's health care organizations that immediately filed suit will be represented in court by Planned Parenthood Federation of America, the Center for Reproductive Rights, and the Columbia law firm Burnette Shutt & McDaniel, according to a news release.

"This ban blatantly defies nearly 50 years of Supreme Court precedent protecting a person’s right to end a pregnancy," said Nancy Northrup, president and CEO of the Center for Reproductive Rights.

The groups requested an "urgently needed" temporary halt from the court while the case awaits a hearing.

The case was assigned to U.S. District Court Judge Mary Geiger Lewis, according to court records. Lewis was nominated by former President Barack Obama in 2011 and confirmed by the U.S. Senate in 2012.

In a news conference Feb. 17 shortly before the House passed the bill, McMaster acknowledged there would likely be lawsuits filed because of the bill, saying that often happens "for big steps forward like this."

"Whether someone challenges or not is up to them," McMaster said. "That's what the courts are for."

McMaster added he believes abortion opponents will eventually prevail, even if it takes some time for the case to get to the U.S. Supreme Court.

"Ultimately, it will stand because it is the right answer to a very serious question," McMaster said.

State Sen. Larry Grooms, the bill's primary sponsor, mourned the thousands of abortions around the world and said those unborn children would be "crying hallelujah" at the bill's passage.

"In just a few moments we're about to do something I spent a quarter of a century trying to do: that is to shut down the abortion industry in this state," said Grooms, R-Bonneau, as McMaster prepared to sign the bill.

The bill "will send a message to everybody that the pro-life movement is alive," said state Rep. John McCravy, R-Greenwood, who championed the measure in the House.

The U.S. Supreme Court has yet to take up a less extreme bill from Mississippi that would ban abortions after 15 weeks of pregnancy, but it did recently reinstate a federal requirement that women seeking to end their pregnancies using medications pick up a pill in person from a hospital or medical office.

Critics of the South Carolina bill note that many women may not even realize they are pregnant until after the six-week period, jeopardizing any chance they have of choosing whether to get an abortion. Supporters counter that an embryonic heartbeat is a sign of life, at which point abortions are tantamount in their eyes to murder.

"The beating hearts of unborn children should awaken the conscience of our nation to the tragedy and reality of abortion — which deprives innocent boys and girls of the fundamental right to life," said Marjorie Dannenfelser, president of national anti-abortion group Susan B. Anthony List.

About 55 percent of abortions in South Carolina are conducted after six weeks of gestation, according to 2019 data from the state’s health department. 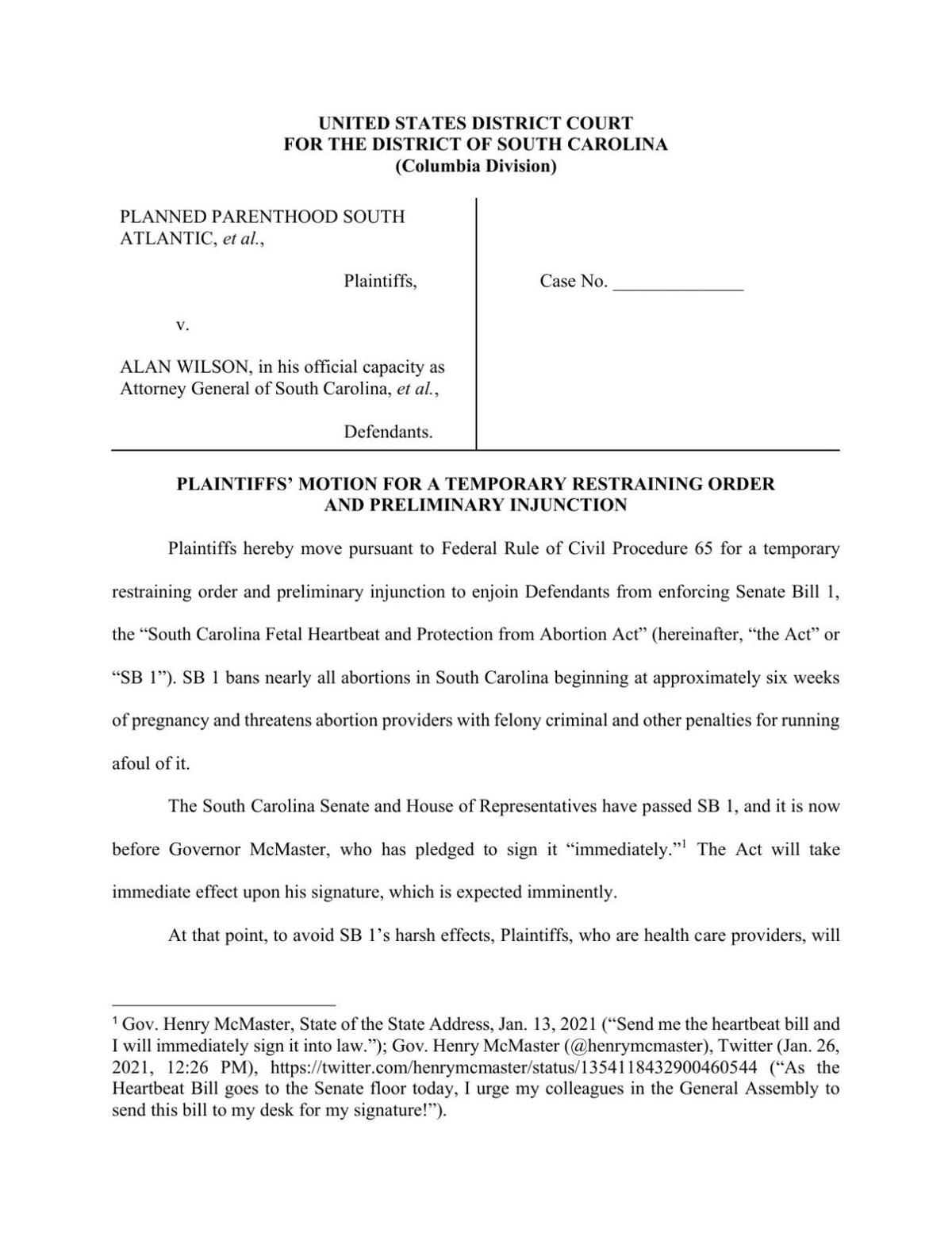 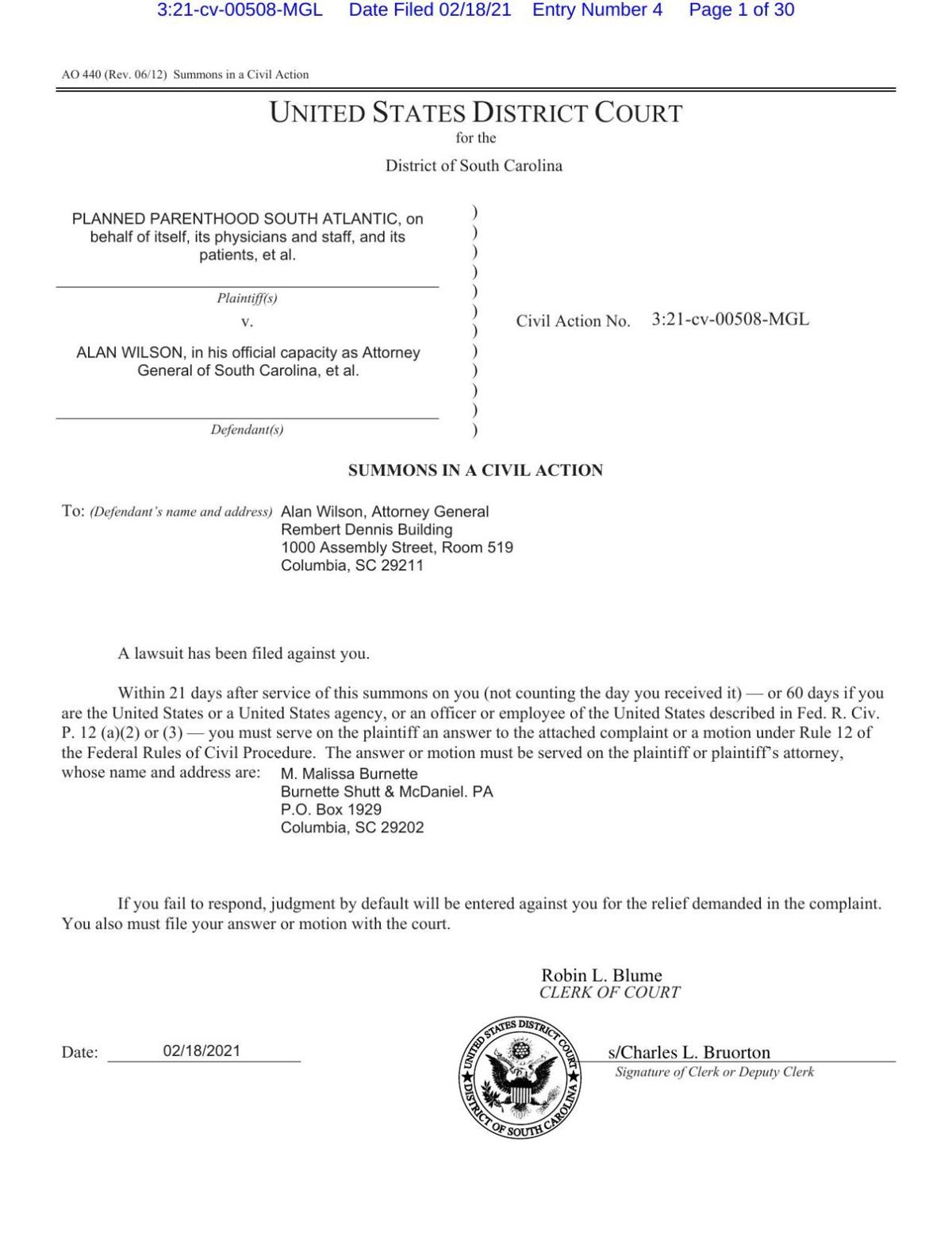 The South Carolina law includes a few exceptions for cases of rape or incest, if the life of the mother is in danger or if the fetus has a fatal anomaly that would render it nonviable outside the womb.

The rape or incest exception includes a provision that would require physicians to report those cases to the local sheriff and the state health agency, including the name and contact information of the woman.

The Greenville Women’s Clinic was open as usual Feb. 18, though no one inside was available for comment. The organization issued a statement saying most of its patients do not know they are pregnant until after six weeks, meaning the law would act as a total abortion ban for them.

Marianne and Richard Stoddard have stood vigil at the clinic, which provides abortions in addition to other women’s health services, during the season of Lent for at least a decade. Lent started Feb. 17.

It’s been a popular spot for demonstrators for years. Two years ago, a pro-life group built a new facility for the Piedmont Women’s Clinic across the street — a place where people from the prayer vigils try to direct women arriving for services at the abortion clinic.

"All life matters, from conception to natural death," said Marianne Stoddard, 72, who said she has been involved in the pro-life movement since she was 25.

Adam Benson contributed to this report from Columbia and Anna Mitchell contributed from Greenville. Follow Jamie Lovegrove on Twitter @jslovegrove.