COLUMBIA — The longtime leader of South Carolina's elections agency submitted her letter of resignation May 12, informing the commission's chairman that she will leave her post at the end of the year after almost two decades on the job.

In the letter submitted to chairman John Wells and obtained by The Post and Courier, S.C. Election Commission executive director Marci Andino did not specify a reason for her departure but referenced an undisclosed discussion she had with Wells last week.

"I have dedicated most of my life's work to ensuring my fellow South Carolinians had the opportunity to vote in fair and impartial elections," Andino wrote.

Charleston County has a $100,000 towable voting trailer. Some wonder if it can stay legal.

"As I near the fulfillment of the duties of my current post, I stand proud of my accomplishments," she added. "And as I plan for future opportunities, I will always remain steadfast in my dedication to the preservation of our democracy."

A spokesman for the agency declined to comment beyond the contents of the letter.

Wells, a Kershaw County attorney, also said he would not discuss his private conversations with Andino.

"All I can say is that Marci Andino was a very good executive director," Wells said. "She knows South Carolina elections probably better than anyone on the planet and she will be sorely missed."

Andino has served as the commission's executive director since 2003, managing the day-to-day operations of an agency tasked with overseeing the state's ballot box process.

But she came under fire from top Republicans last year after she recommended a series of changes to the state's election procedures that Democrats then used to file multiple lawsuits over the process.

Lawmakers adopted some of those proposals but rejected others. Democrats fought all the way to the U.S. Supreme Court to try to get the witness signature requirement dropped, but the high court ultimately sided with the Republicans who wanted that measure to remain in place.

In her resignation letter, Andino touted her agency's handling of the 2020 election as one of her top achievements, calling it the state's "best general election in history under the worst circumstances."

"Legislation and court decisions changed the rules frequently, but we adapted and stayed focused on making sure reasonable precautions were taken and every voter had the information they needed to cast their ballot," Andino wrote. "The results were extraordinary."

"This is a travesty and a blow to open and fair elections in S.C.," Robertson tweeted. "Director Andino has always been an honest broker and always spoken the truth."

State Sen. Chip Campsen, who chairs a subcommittee that oversees the election agency, said he disagreed with Andino's pandemic recommendations but did not want to see her go.

"I've really had a good relationship with her and worked with her on election law changes," said Campsen, R-Charleston. "But to me it was inappropriate (for Andino to suggest absentee voting expansions) because the Legislature is the policymakers." 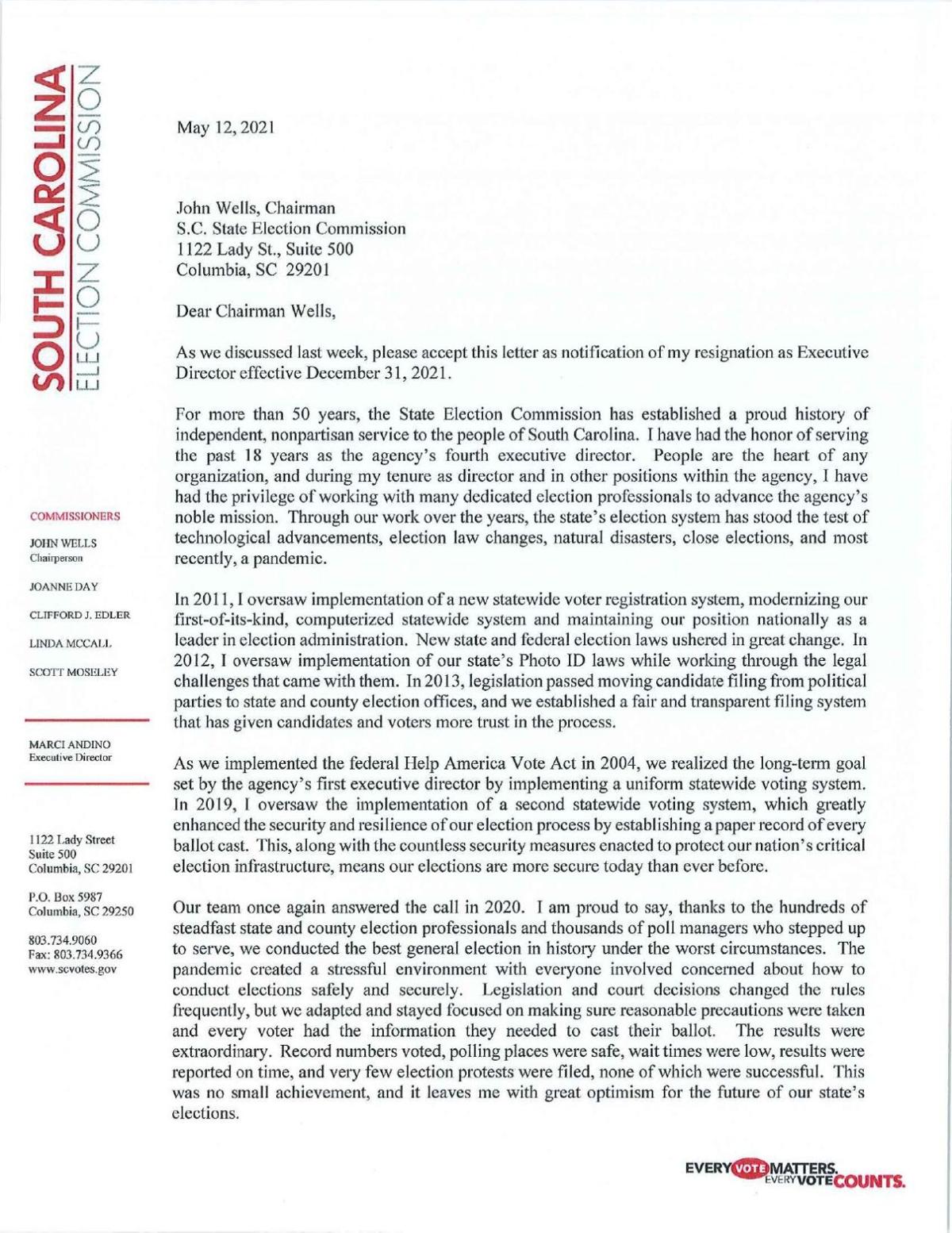 Andino's resignation comes as Republicans in the Statehouse have looked to give her agency more control over local election officials.

Powerful S.C. House Speaker Jay Lucas, R-Hartsville, proposed a bill this year that would empower the state Election Commission to "supervise and standardize the performance, conduct, and practices” of county election commissions."

That legislation passed the House but has not yet moved in the Senate, where lawmakers instead voted for a different bill that would add confirmation votes for the governor's Election Commission nominees but maintain county authority over the local process.

The five current members of the board, including Wells, were all appointed by Gov. Henry McMaster. The governor will be on the ballot himself in 2022 when he seeks reelection to a second full term in office.

Prior to her 2020 tussles with Republican politicians, Andino also drew scrutiny in 2019 for her relationship with the country's largest voting equipment company.

Andino served on an advisory board formed by Elections Systems and Software, known commonly as ES&S, and the state then later paid the company millions to purchase voting machines. She said her connection to the company played no role in the state's decision to give it the contract.