COLUMBIA — South Carolina's top election official is warning state lawmakers they need to take several critical steps as soon as possible to ensure November's general election can occur safely and efficiently during the coronavirus pandemic, including by expanding access to absentee voting as they did for the June primaries.

In a letter sent Friday and obtained by The Post and Courier, S.C. Election Commission Executive Director Marci Andino told S.C. Senate President Harvey Peeler and S.C. House Speaker Jay Lucas she has serious concerns about the state's ability to conduct what's expected to be a busy presidential election under current rules.

Among her concerns were that the absentee-by-mail voting process "will be overwhelmed and overrun" as social distancing at polling places will be either difficult or impossible, poll managers will be hard to recruit, wait times will rise and more people will seek curbside voting to avoid long lines.

"Even under normal circumstances, presidential elections are the ultimate test of any state’s election process," Andino wrote. "With the unique and unprecedented challenges of the pandemic, additional actions are necessary to ensure a safe and efficient election process in November."

Andino laid out six main recommendations that could help:

Andino floated a couple of other suggestions that included early voting and vote-by-mail that she acknowledged the state might not have enough time to start for the November election.

Lucas' spokeswoman confirmed the speaker received the letter and read it but did not immediately have further comment on whether the House would adopt Andino's recommendations. Peeler did not respond to a request for comment.

Several other key elected officials were copied on the letter, including Gov. Henry McMaster and legislative leaders in both chambers.

Andino asked that the Legislature take "immediate action," but lawmakers are not scheduled to return to the Statehouse until September.

Election officials already took a measure of their own to aid voter participation by providing prepaid postage for all mailed absentee ballots. South Carolina Democrats have filed lawsuits to force some of the changes Andino recommended, including expanding absentee voting and removing the witness signature requirement.

Under ordinary rules in South Carolina, voters are required to cite one of several possible reasons to cast an absentee ballot, including old age, physical disability, work requirements or being out of town on Election Day.

Some Democratic lawmakers attempted to expand absentee voting for the general election during a brief legislative session last month. But Republican leaders rebuffed the efforts, saying they could consider it when they return to the Statehouse again in September instead.

South Carolina is expecting a huge surge in absentee voting, which tripled in June compared to the 2016 primaries.

The June primaries were marred by confusion about where to vote when precincts were consolidated with shortages of volunteers. Richland County had long lines at several polling sites where voters did not cast ballots until after midnight. State election officials stepped in to help with the county's runoff races. 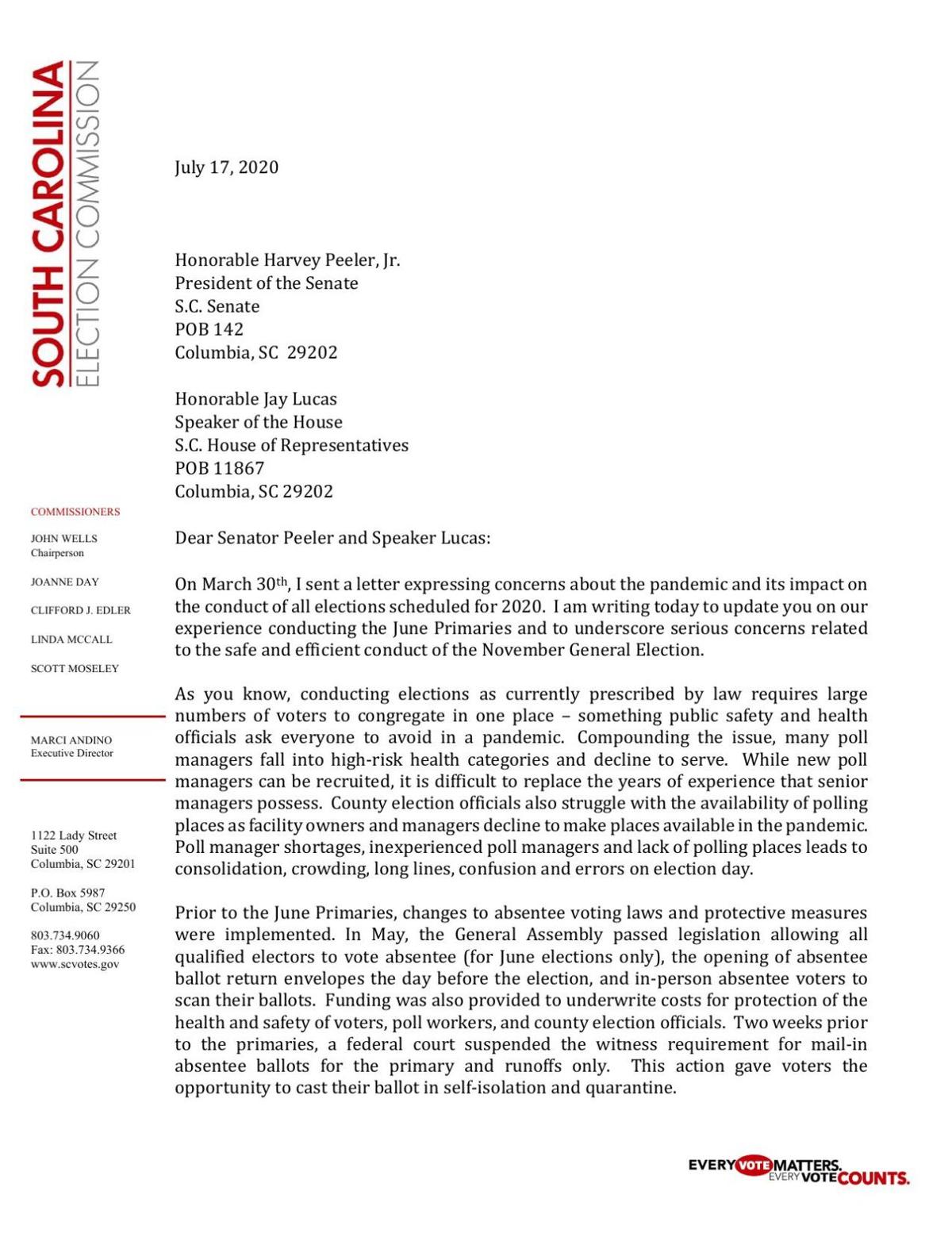