COLUMBIA — The board of South Carolina's disabilities agency fired its director for a second time, a day after a judge ruled she was illegally fired earlier this year via a script orchestrated in a secret meeting by its commissioners.

Mary Poole, director since fall 2018, was fired — again — by the Department of Disabilities and Special Needs' board Aug. 19, this time on a 5-2 vote, with former Chairman Gary Lemel repeating his dissent and criticism.

"The illegalities of the action taken, followed by this vote, can have nothing but a negative impact on morale, and I'll add that to the reasons I'll be voting no," said Lemel, the only commissioner to speak publicly on the decision.

The other "no" came from the newest commissioner, Gary Kocher, appointed in May.

It was a preliminary ruling on Poole's lawsuit filed in June. It accuses commissioners of conspiring to oust her and damage her reputation by using a false narrative — put in a letter and read publicly in a special meeting two weeks after her dismissal — that she mishandled a sexual harassment claim in November.

She says that claim was appropriately resolved and alleges the plot against her actually began several months earlier, after she refused to sign off on raises for several employees.

While McIntosh's order technically made Poole director again, the judge agreed that putting her in charge amid the ongoing lawsuit would be "disruptive." So he temporarily gave Poole her title back while not allowing her to resume the director's role, and he told the commission to vote lawfully within 60 days. 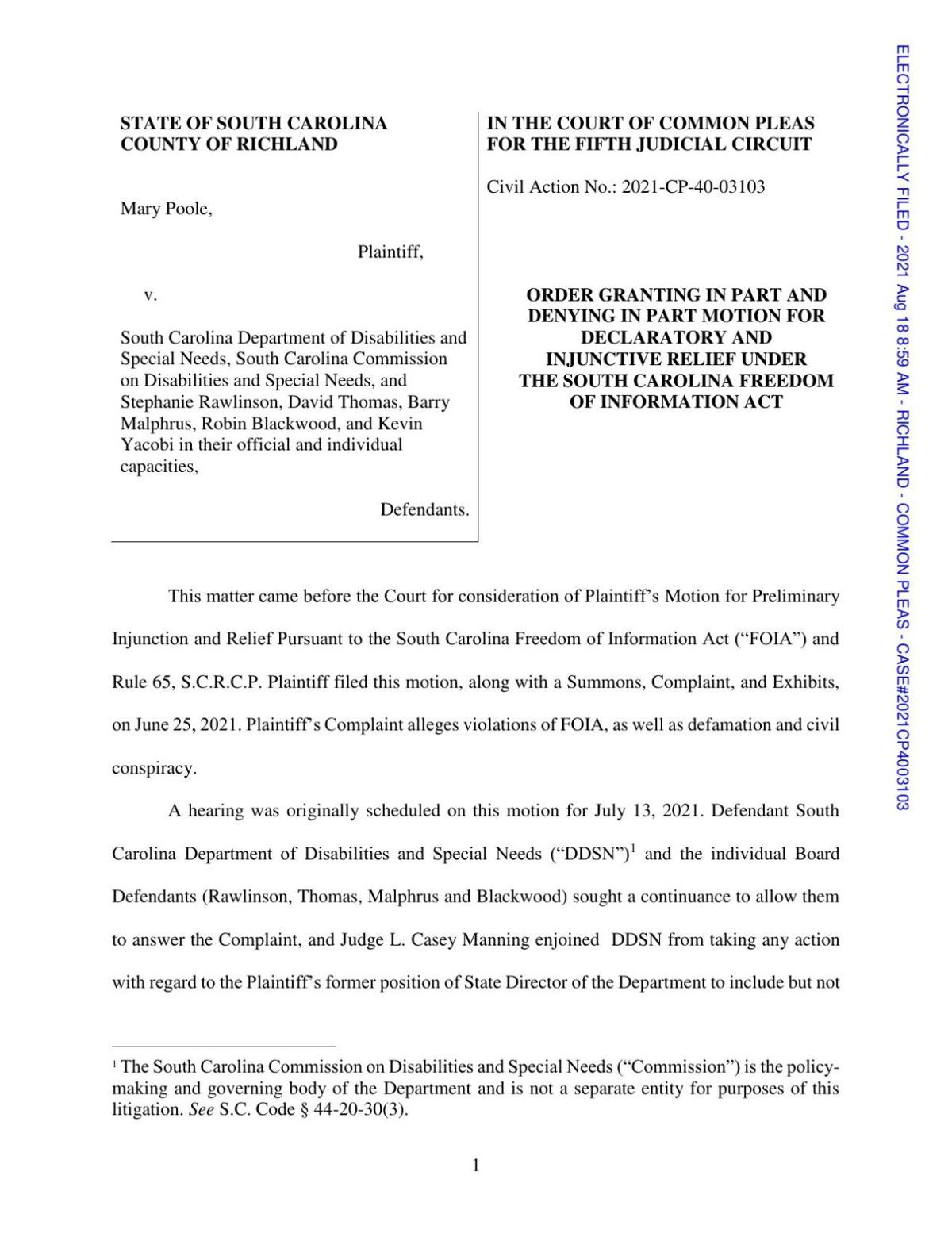 McIntosh also ordered the agency to pay Poole her back wages and benefits for six months, along with her attorney fees. The agency could not provide a total Aug. 19, but Poole's salary was $171,400.

The judge declared email exchanges Jan. 22 and Feb. 16 between four of the commission's six members to be illegal meetings.

"I made some edits, added some detail and tried to divide up the work a little," read the subject line of a Feb. 16 email from now-Chairwoman Stephanie Rawlinson to three other commissioners: Robin Blackwood, Barry Malphrus and former state Sen. David Thomas.

Attached to her email was a 14-part, five-page script for firing Poole, titled "Plan for 2/18/21 Exec Session," complete with contingency plans of what motions to make and what to say under various scenarios, such as if Poole refused to resign or asked to be heard.

Also included was what to do if Lemel, who wasn't part of the email exchange, refused to ask for Poole's resignation or let them end the closed-door meeting as planned. 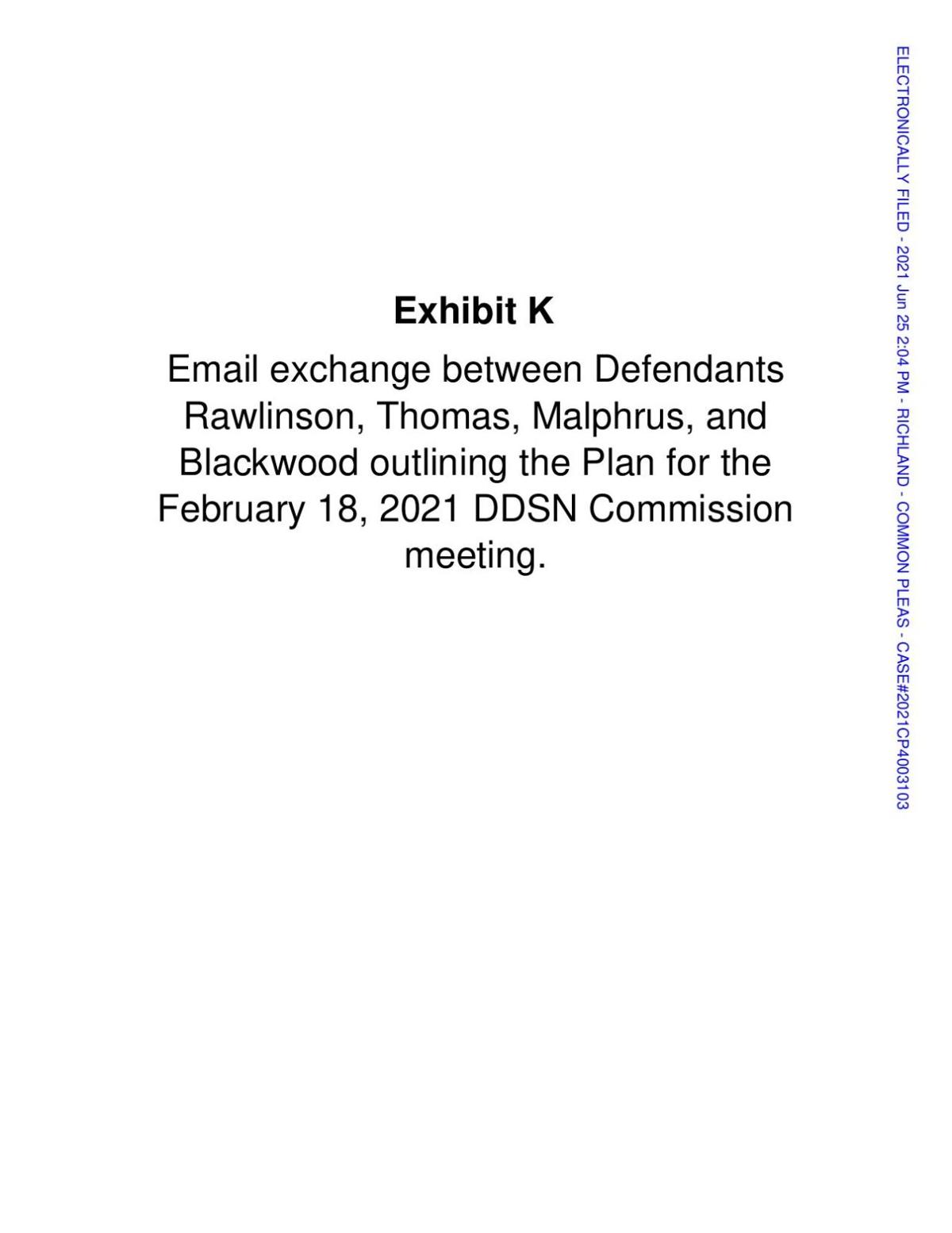 "Indisputably, a quorum plotted out this plan by email, and they followed the plan to the 'T' in terms of who would say what," Poole's attorney, Jack Cohoon, told The Post and Courier.

"It's a significant win. Hopefully it's a shot across the bow that FOIA has teeth, and the law needs to be followed," he said.

Since the lawsuit continues, the commission has no comment on the ruling, agency spokesman Tommy Windsor said after the vote.

Beyond back wages, her lawsuit also seeks money for harming her career and ability to get another job in the industry, as well as punitive damages to deter the agency from breaking FOIA law again.

Poole, who's worked in various disability roles over three decades, said she sued to bring what four commissioners did in secret "out into the daylight."

The agency and its board "are in dire need of more transparency," she said. "I believe the court's order will encourage positive reforms. I will continue to advocate for people with disabilities and look forward to restoring my reputation."

Editorial: We shouldn't have to ask why SC disabilities (or any) director was canned

He directed each of the four commissioners in the email exchanges to provide him sworn affidavits within 30 days, "under penalty of perjury," promising they've provided Poole's attorney every public document he's entitled to under his March 2 public records request. Any document not yet turned in, McIntosh said, should be attached to the affidavits.

All seven of the agency's governing board members are appointed by Gov. Henry McMaster, with the Senate's consent.

The agency's chief attorney, Constance Holloway, remains the interim director, earning a salary of $168,100. Interviews with candidates for a permanent replacement are being lined up, Windsor said.