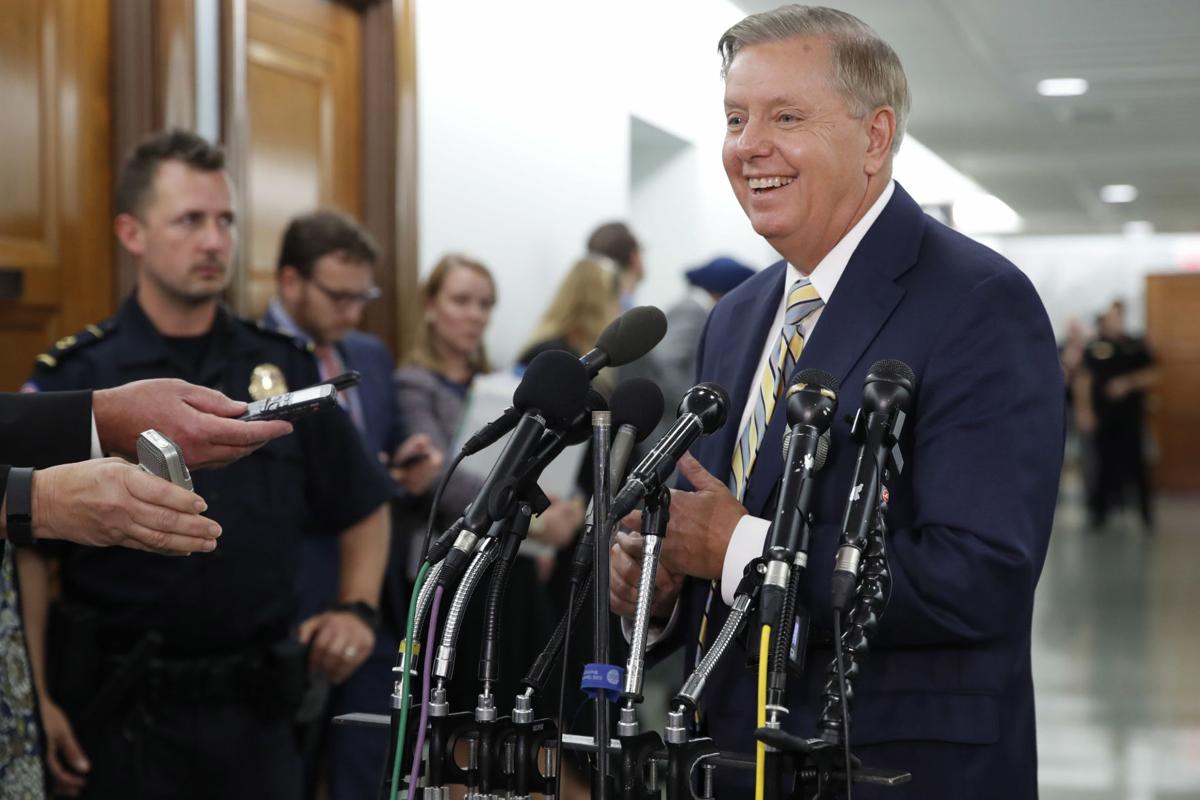 Sen. Lindsey Graham, R-S.C., answers questions from reporters at the end of the Senate Judiciary Committee meeting Sept. 28, 2018, on Capitol Hill in Washington. Graham has seen a bump up in his popularity in South Carolina because of the Brett Kavanaugh nomination hearings. AP Photo/Jacquelyn Martin 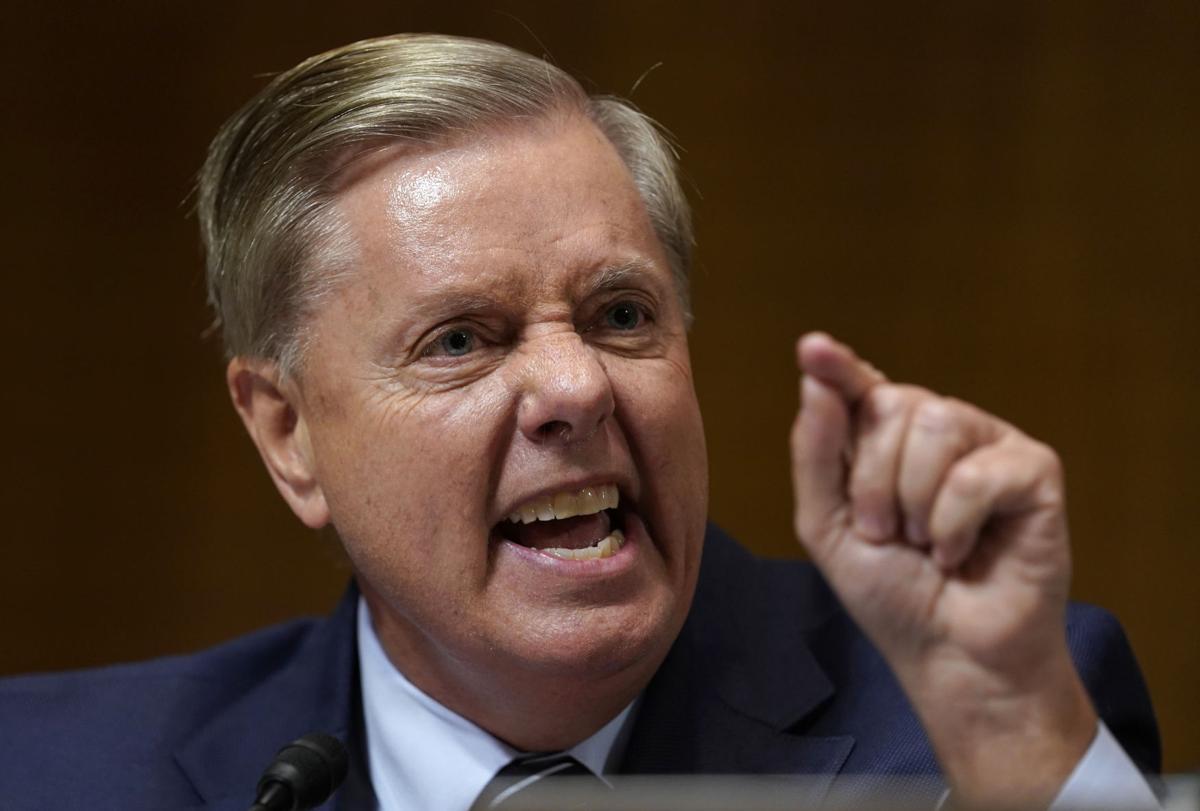 Sen. Lindsey Graham, R-S.C., answers questions from reporters at the end of the Senate Judiciary Committee meeting Sept. 28, 2018, on Capitol Hill in Washington. Graham has seen a bump up in his popularity in South Carolina because of the Brett Kavanaugh nomination hearings. AP Photo/Jacquelyn Martin

Graham, hours away from the high-stakes hearing about a sexual assault allegation against Supreme Court nominee Brett Kavanaugh, chuckled.

"But sure enough, he did give them hell," Stutts said Friday, reflecting on the senator's highly-pitched and well-publicized tirade over Kavanaugh's treatment the day before.

"Conservatives have had our disagreements with Sen. Graham in the past," he continued. "But my hope is he's coming to see the light. I think this has gone a long way in rehabilitating his reputation."

"Disagreements" may be putting it lightly.

Conservatives have grumbled about him publicly and privately for years. They have lambasted him in the most explicit of terms when he's taken more moderate positions. They have doggedly recruited GOP primary opponents to challenge him.

But on Friday, conservative activists across South Carolina found themselves expressing a rare new feeling about their often polarizing senator: total support. It's a feeling that could ease what was looking like another tough re-election fight for Graham in 2020.

“Lindsey was the hero of the Republican Party yesterday and of conservatives everywhere,” said Rick Tate, GOP chairman in ruby red Pickens County.

"Conservatives will not forget Lindsey standing up for Kavanaugh yesterday," Tate said. "It will be in the minds of conservatives as long as Lindsey is in public office. It will be one of the hallmarks of his career."

Among a crowd of Republicans defending Kavanaugh, who faced a sexual assault allegation against him from his high school days, Graham's explosive eruption in Thursday's hearing stood out and made him the instant hero of conservative media.

In less than five minutes, Graham appeared to absolve years of shortcomings in the eyes of right-wing purists. Republican foes old and new sang his praises.

Thursday's episode marked only the dramatic climax of Graham's extended turnaround largely tied to the new White House. During the past two years, he has transitioned from a vocal Donald Trump critic to one of his staunchest allies.

But even if Graham's recent behavior could have foreshadowed the vigorous Kavanaugh defense — and even in an era of seemingly constant political unpredictability — the moment still caught many South Carolina conservatives by surprise.

Known for his pursuit of compromise on issues like immigration, Graham has at times carved out a reputation for bipartisanship. As he noted repeatedly Thursday, he voted for two of President Barack Obama's Supreme Court nominees, Elena Kagan and Sonia Sotomayor.

As extreme as the response to Graham was on the right, it ignited an equally emotional recrimination from the left. Protestors took to Graham's multiple state offices Friday, an increasingly regular occurrence, to express their anger at him.

While Graham's tirade reunited him with parts of the GOP base, it likewise may have erased any lingering respect between him and Democrats.

"Like so many, years ago I was fooled into thinking that here's this guy who at key moments can be above the fray," former S.C. Democratic Party chairman Jaime Harrison said. "But I have quickly come to realize that all of that is an act... If the Senate is rotten, then he is at the core of helping it to get to that point."

Now an associate chairman of the Democratic National Committee, Harrison argued actions like Graham's will provide a boost to Democrats as they look to mobilize voters ahead of this fall's elections and beyond.

On a personal level, Harrison said the episode may even convince him to run against Graham in 2020.

"Either I will do it or I will work to find somebody of the caliber that I think could put up a challenge and win this Senate seat," Harrison said. "The days of just allowing people to take a pass... are over. I can't allow that. So he better prepare for a general election battle because he's going to get one."

To be sure, conservative doubts about Graham, built up over many years, won't disappear overnight.

“Yesterday was a great day for Lindsey Graham but it’s going to take more than one great day to change the minds of many folks who are out there," said Gerri McDaniel, a Tea Party activist in Myrtle Beach and a key South Carolina field organizer for Trump's 2016 campaign.

From just about the moment Graham defeated a half-dozen GOP primary challengers in 2014, arch conservatives have sworn they would be back for vengeance when he is up for reelection in 2020.

"It's no secret they had a big group coming after him, and it's no secret that a lot of us were being courted," said U.S. Rep. Ralph Norman, a hardline conservative from Rock Hill.

Now, though, Norman said his phone was "blowing up" with praise for Graham from friends who have long criticized him.

Norman, who created his own controversy a week ago by joking that Ruth Bader Ginsburg had been groped by Abraham Lincoln, wrote a personal note to Graham congratulating him on the hearing and vowing to go to bat for him in 2020.

"I'm going to do what I can to get him reelected and to dissuade anybody that maybe looking at getting involved," Norman said. "That one moment was a defining moment. He has taken a lot of heat for when he voted for Elena Kagan and Sotomayor. Now, he stepped up for the right man at the right time and he just won reelection."

Catherine Templeton, the Mount Pleasant attorney who lost to incumbent Gov. Henry McMaster in this year's GOP primary, said Graham's comments Thursday validated her refusal to entertain pleas from supporters to run for the Senate next.

"I'm sure that anyone who would take on Lindsey for this next election would be doing it solely for egotistical reasons at this point because it would only hurt this state if Lindsey wasn't up there," Templeton said. "He's proven again that he delivers for this state and for the Republican Party."

Even some of Graham's former rivals, including former state Sen. Lee Bright, acknowledged that Thursday was "definitely a step in the right direction."

"I was glad to see him stand up for conservatives," Bright said. "I'd hope he'd continue to do things like this."