A Columbia attorney on Tuesday filed a formal disciplinary complaint against S.C. Attorney General Alan Wilson, alleging the Lexington Republican knowingly supported a “false and frivolous” lawsuit that sought to overturn the results of the 2020 presidential election.

In the four-page filing, attorney Chris Kenney alleges Wilson and 16 other Republican attorneys general fanned the flame of insurrection, setting the stage for last week’s deadly riot at the U.S. Capitol when they cast doubt on the integrity of the 2020 presidential election won by Democrat Joe Biden.

“What is clear is that this attack on Congress was incited by the executive (President Donald Trump) with aid and comfort from many like Mr. Wilson who repeated and lent the credibility of their offices to the false claim that the presidential election was stolen from Trump,” wrote Kenney, who works in the law office of state Sen. Dick Harpootlian, D-Columbia.

In an emailed statement, Wilson spokesman Robert Kittle wrote, "This is pure partisan politics. We're not going to comment any further." 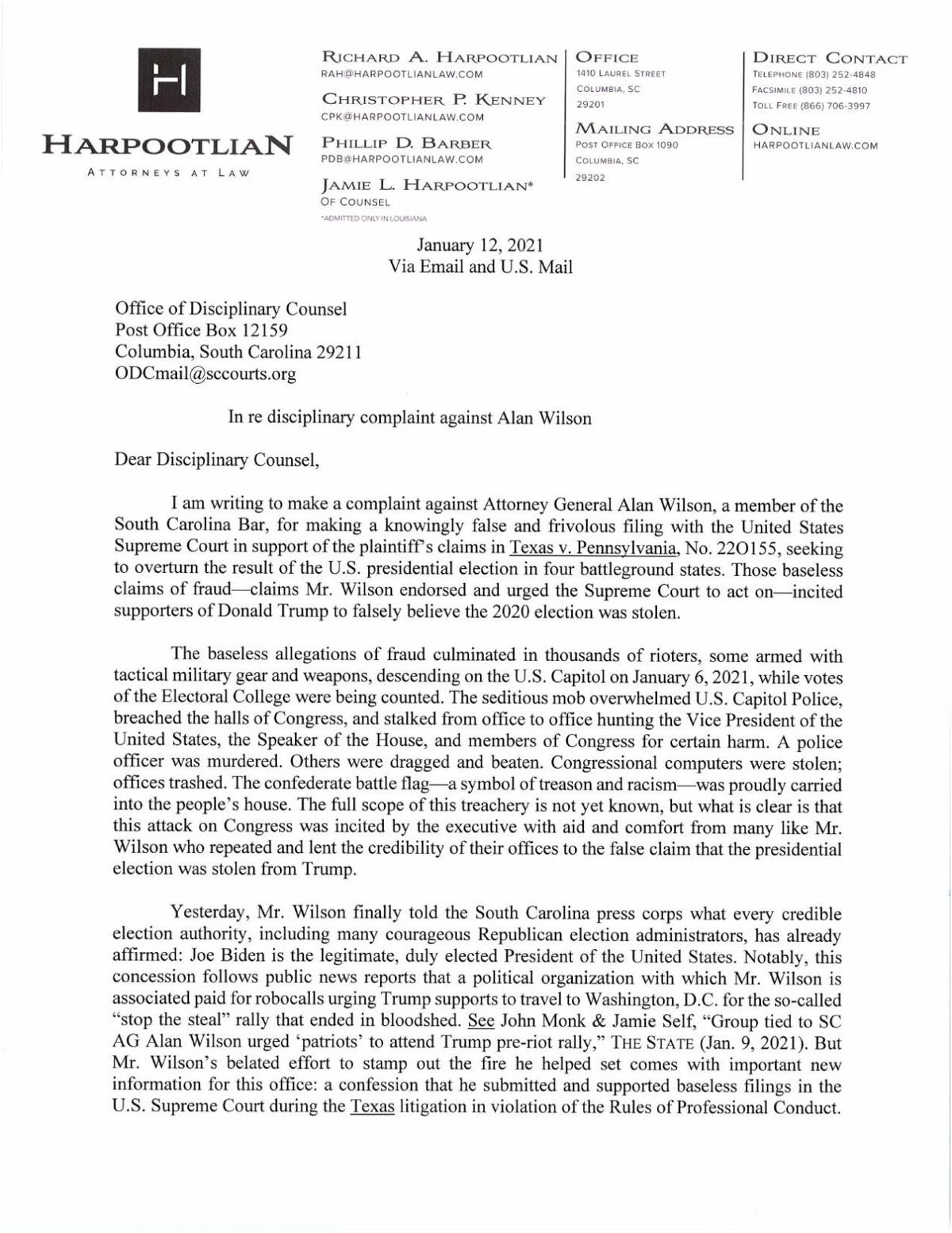 Kenney filed his complaint with the S.C. Office of Disciplinary Counsel, which investigates roughly 1,400 complaints of misconduct against attorneys and judges every year. The agency’s investigations and findings are typically shielded from public view.

He submitted the complaint as Wilson seeks to distance himself from the violence at the Capitol last week. The filing comes a day after Wilson’s former aide, Adam Piper, resigned as executive director of the Republican Attorneys General Association amid revelations the group sent a robocall encouraging "patriots" to march on the Capitol and demand Congress overturn the election results.

Wilson, who sits on RAGA’s leadership board, has repeatedly said the RAGA staff sent the robocall without his knowledge or consent.

The protest in Washington, D.C., devolved into mayhem last Wednesday as hundreds of Trump supporters attacked police as they swept into the U.S. Capitol building, sending Congress into lockdown. The mob delayed the certification of the presidential election results.

John Freeman, a University of South Carolina School of Law professor emeritus, read Kenney's complaint and said it appears to have merit. Attorneys, and especially the top law enforcement official in South Carolina, are supposed to have proof and evidence to back up serious claims they make in legal filings, Freeman said.

"You can't bring frivolous lawsuits," Freeman said. "You can't use the courts to just go out and try to hurt somebody or make a political point. You've got to have legal facts, evidence. You've got to have a legal right to be there, not just because it feels good or you want to score points with your base."

Kenney’s filing notes that in recent days Wilson has acknowledged Biden is the legitimate winner of the 2020 election and that he is unaware of any evidence presented in court to substantiate allegations of election fraud.

But just a month ago, Wilson made a Dec. 9 filing that encouraged the U.S. Supreme Court to consider a lawsuit brought by the Texas attorney general that challenged the election results in four key battleground states that Biden won, Kenney wrote.

“Mr. Wilson now concedes there is no evidence for what he urged the U.S. Supreme Court to find and hold just one month ago,” Kenney wrote. “This amounts to a confession he violated his obligations as a member of the bar and warrants punishment, particularly in light of the harm he helped cause.”

The Supreme Court voted 9-0 to reject the Texas lawsuit, which sought to invalidate the votes in Georgia, Wisconsin, Michigan and Pennsylvania.

Still, Wilson using his official position to raise doubts about the integrity of the 2020 election “was reckless and anti-democratic with ruinous consequences,” Kenney wrote.

From here, the Office of Disciplinary Counsel will decide whether to toss out Kenney's complaint or investigate it further. The agency often metes out discipline in the form of private warnings or reprimands. There is little assurance the office's findings will ever be released publicly.