Santee Cooper’s defenders in the South Carolina Senate went on the offensive Thursday, offering a preview of next year’s contentious debate in the Statehouse over whether to sell the embattled power and water utility to Florida-based NextEra Energy.

A bipartisan pair of senators called for more scrutiny of NextEra, one of the country’s largest power companies, as it seeks to gain a major foothold in the Palmetto State by purchasing Santee Cooper.

In response, a panel of the Senate Judiciary Committee agreed to request a trove of documents from NextEra that would detail the power giant’s behind-the-scenes efforts to acquire South Carolina's public utility.

“I want to know what I’m voting on, and we can’t get there until these questions are answered,” said state Sen. Dick Harpootlian, D-Columbia.

A NextEra spokesman did not immediately respond to requests for comment Thursday.

The push for more scrutiny of NextEra comes just before the General Assembly reconvenes in Columbia in January and returns to a years-long debate about Santee Cooper’s future.

The 86-year-old utility has been on the state’s chopping block since 2017, when the public learned Santee Cooper lost $4 billion of its ratepayers’ money on the failed expansion of the V.C. Summer nuclear power plant in Fairfield County. 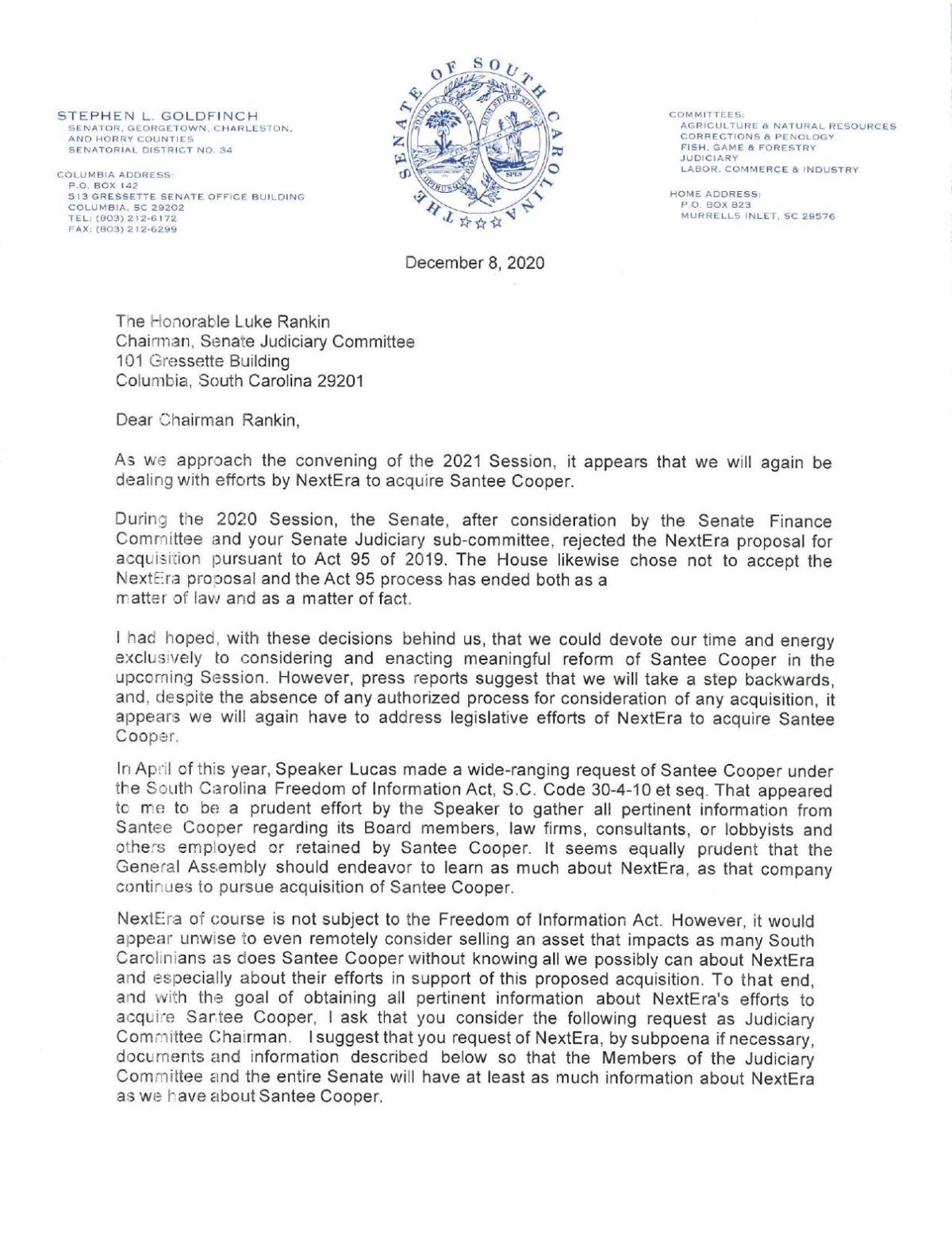 A number of top political leaders, including Gov. Henry McMaster, say selling the utility to NextEra is the best way to ensure ratepayers don’t have to pay off that $4 billion debt on their power bills. But Santee Cooper supporters, backed by a state analysis of the NextEra bid, contend that a sale to NextEra would actually cause power bills to rise.

For the past three years, most of the debate has focused on Santee Cooper, highlighting the Moncks Corner-based agency’s recent history of political mistakes and poor business deals.

But at Thursday’s hearing, supporters of Santee Cooper sought to shift that spotlight back onto NextEra, a Fortune 500 company that has aggressively sought to expand by purchasing smaller power companies across the United States.

Republican state Sen. Stephen Goldfinch of Murrells Inlet asked the Senate committee to request a host of documents from NextEra, dating back to July 2017, that would shed light onto how the Juno Beach-based company has sought to persuade South Carolina leaders to sell Santee Cooper.

The documents include communications between NextEra lobbyists and state lawmakers; a listing of NextEra’s recent political donations in South Carolina; and records of any NextEra efforts to build public support for the deal by paying political bloggers, business groups and social media influencers.

The committee agreed to request the records and raised the possibility of formally demanding them with a subpoena if NextEra doesn’t voluntarily comply by Jan. 15.

Meanwhile, Harpootlian called for senators to investigate NextEra’s failed takeover of the city of Jacksonville’s electric utility, an aborted business deal that has been the target of several investigations over the past year.

In a Dec. 10 letter to the Senate Judiciary Committee that was unveiled Thursday, Harpootlian accused NextEra of failing to comply with the rules as S.C. lawmakers sought offers to purchase Santee Cooper in 2019.

The power company was required to detail all of its recent efforts to purchase other utilities, Harpootlian said, but it left out its controversial and unsuccessful attempt to take over the Jacksonville Electric Authority. 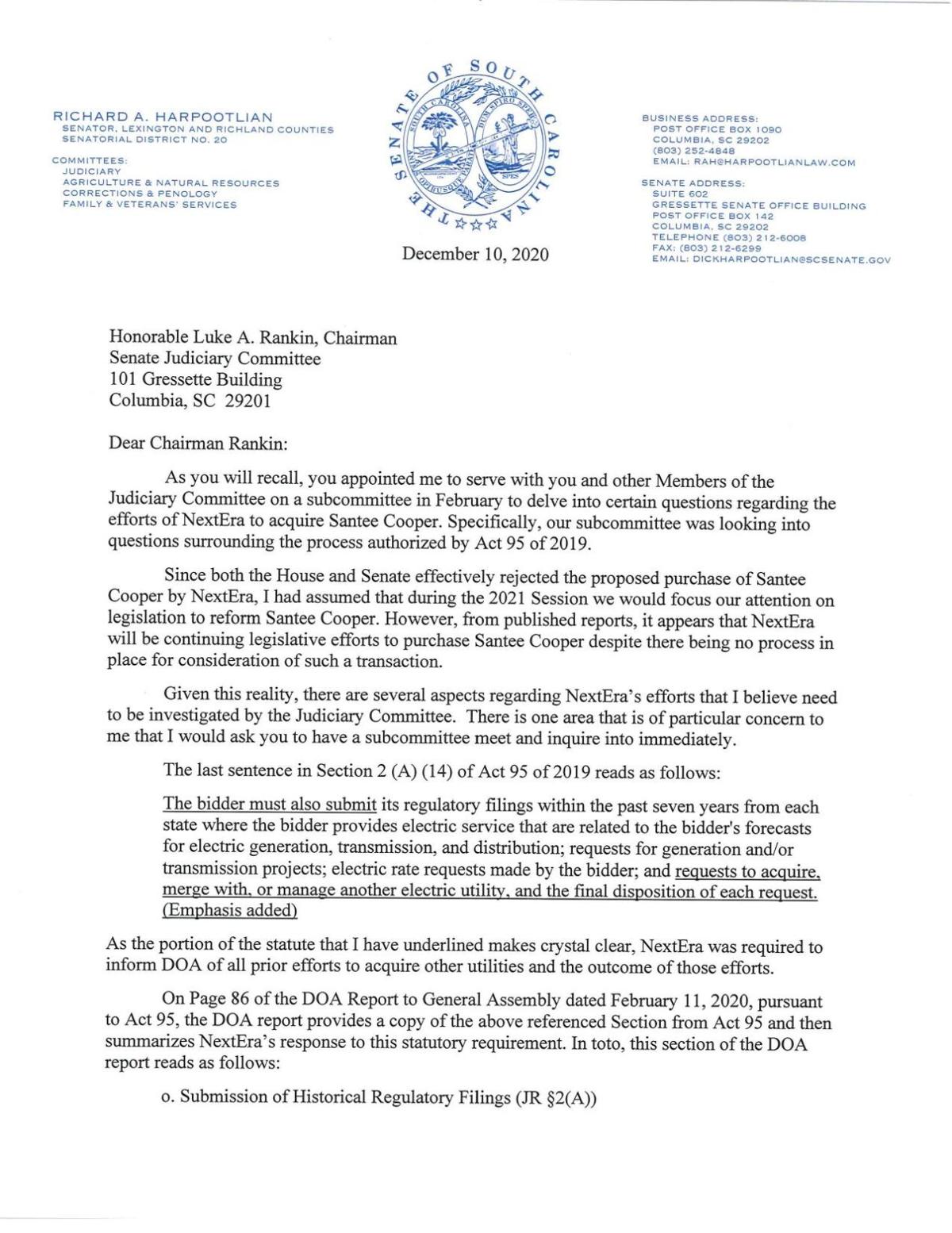 Authorities in Florida are looking into whether NextEra lobbyists were also advising the city of Jacksonville during the attempted privatization, a potential conflict of interest, Harpootlian said.

The senator said the investigation also seeks to determine whether the bid process in Jacksonville was rigged to favor NextEra.

“I think it is imperative that we look very seriously at NextEra’s failure to comply,” Harpootlian said.

The senators stressed they haven't made up their minds about whether Santee Cooper should be sold. But the panel included some of the most vocal opponents to a sale in previous Statehouse debates.