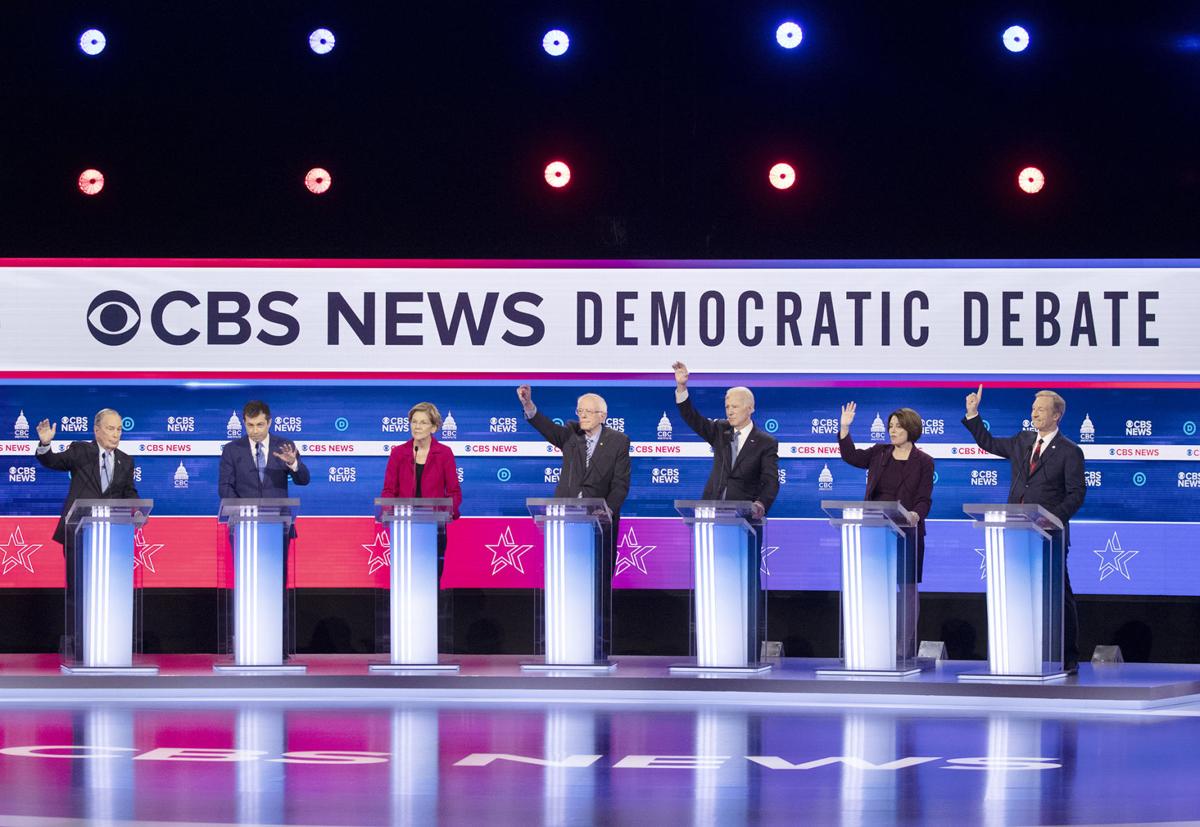 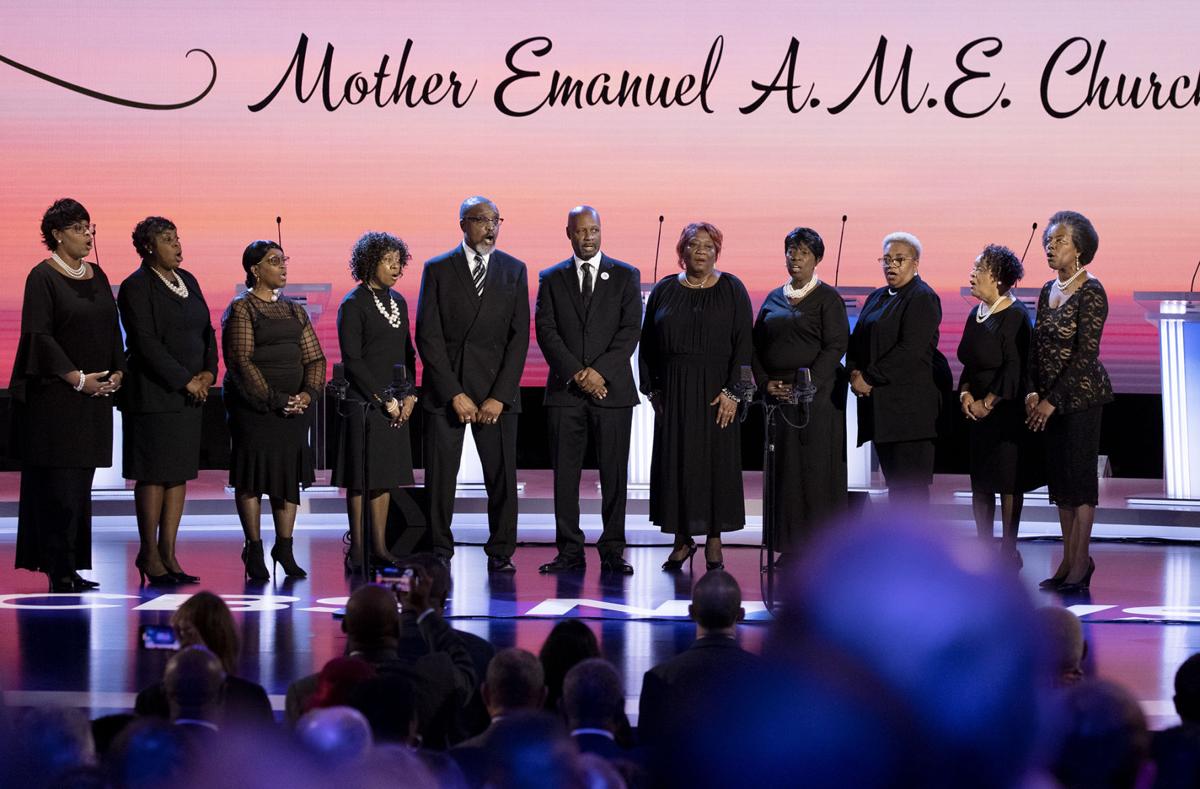 The Emanuel AME Church choir sings prior to the Democratic presidential primary debate at the Gaillard Center in Charleston on Tuesday, February 25, 2020. Lauren Petracca/Staff 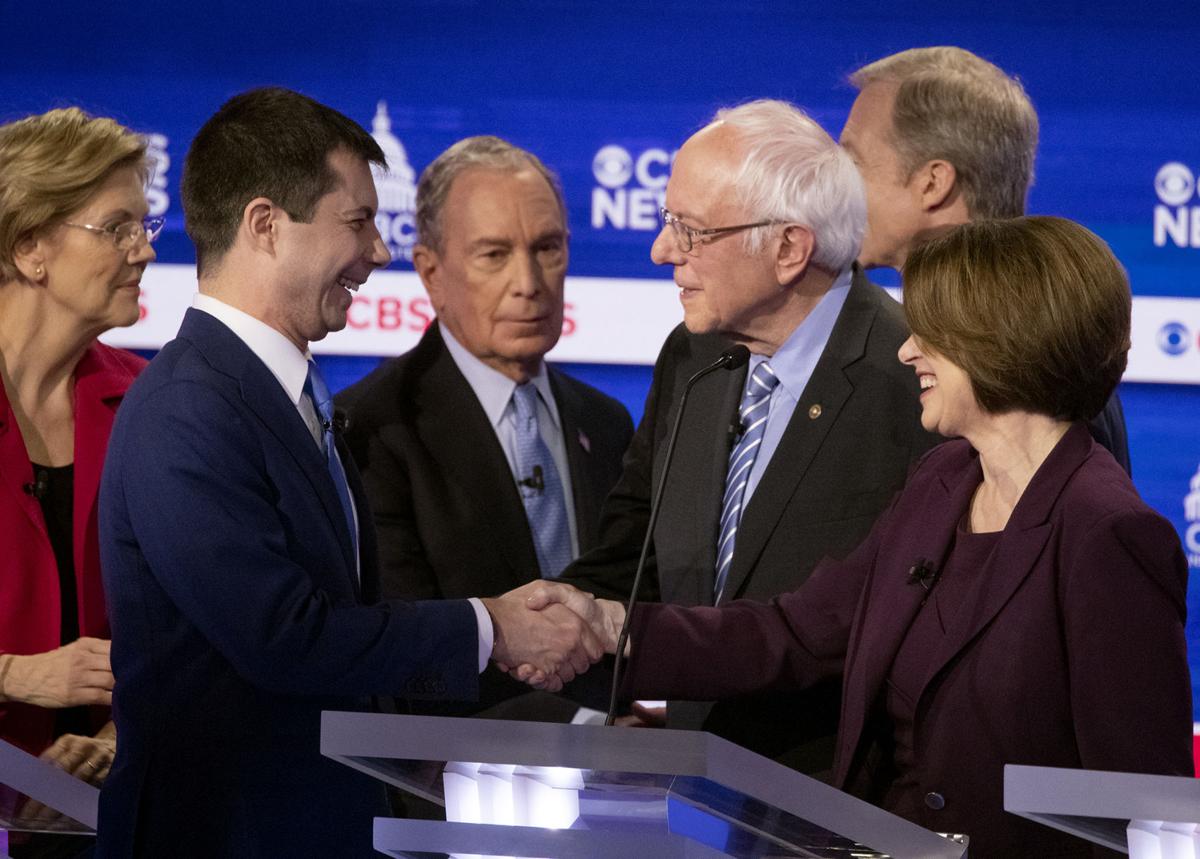 In a cacophonous two-hour debate Tuesday night in Charleston, seven 2020 Democratic presidential candidates sparred over gun control, healthcare, their voting records and which of them would be most likely to defeat President Donald Trump.

The combative contest, which at many times was overrun by crosstalk as the contenders yelled over each other, underscored the high stakes in South Carolina’s “First in the South” primary this Saturday, with several campaigns on the ropes.

Though held in Charleston’s Gaillard Center, it was also the final debate before voters head to the polls in 14 other states on Super Tuesday, a pivotal juncture in the race.

While former vice president Joe Biden has led polls in South Carolina, the candidate who took the most incoming fire was U.S. Sen. Bernie Sanders, who has emerged as the frontrunner in the overall race after strong performances in Iowa, New Hampshire and Nevada.

After facing repeated hits from Biden for voting against major gun control bills and former mayor Pete Buttigieg of South Bend, Ind., on his electability, Sanders took note of the fact that he had suddenly become the center of attention.

“I’m hearing my name mentioned a bit tonight,” Sanders said. “I wonder why that is.”

In a move that had been telegraphed in recent days by his campaign speeches, Biden hit Sanders on his gun control record, specifically his votes against the Brady Bill, a 1994 law that mandated federal background checks and waiting periods on gun purchases.

Biden noted that Emanuel AME Church, site of the 2015 mass shooting, was walking distance from the debate site.

The circus outside the 2020 Democratic debate in SC: Bernie Bros, Uncle Sam and onlookers

"I'm not saying he's responsible for nine deaths, but that man would not have been able to get that weapon if he had supported this bill," Biden said.

South Carolina issues grabbed a spotlight despite the debate being the last chance for 2020 hopefuls to address voters in Super Tuesday states who go to the polls in a week.

Asked about the state's poor performing public schools, Sanders said he does not want a teacher to earn less than $60,000 a year while Massachusetts Sen. Elizabeth Warren called for an end to "high-stake" testing.

Biden touted, "I’ve taken on the (National Rifle Association) twice and won." Minnesota Sen. Amy Klobuchar said she has backed a bill to close the "Charleston loophole," which would tightened background check regulations.

Sanders responded by noting that Biden had voted for the Iraq war, arguing that they all had made some decisions that may now regret.

“I have cast thousands of votes including bad votes, Sanders said. “That was a bad vote.”

U.S. Sen. Elizabeth Warren of Massachusetts continued to take former New York City mayor Michael Bloomberg to task over allegations from women who worked for him that he made inappropriate comments, extending a feud that began at the previous debate in Nevada.

Warren also sought to contrast herself with Sanders, viewed as her closest competition for more progressive voters, arguing she would be more likely to achieve their shared goals.

“Getting a progressive agenda enacted is going to be really hard, and it’s going to take someone who digs into the details to make it happen,” she said, citing her role in creating a consumer watchdog agency after the 2008 financial crisis as an example.

On a night when several candidates, particularly Biden, were counting on a decisive debate victory to propel them forward, the sheer messiness of the fighting on stage created little opportunity for any of them to emerge from the pack.

The candidates often appeared exasperated as they sought to land a powerful punch only to be cut off before they could finish their points by their rivals or the moderators.

As Biden seeks to ward off Sanders and a surging businessman Tom Steyer in South Carolina, the debate did not feature any moments that might have knocked either of his top foes off their recent momentum.

At one point, Biden appeared so bemused by the way other candidates kept jumping in to talk over each other that he questioned whether anyone would enforce the rules.

“Can we just speak up when we want to?” he asked.

After the CBS debate moderators noted the historically low rankings of South Carolina’s education system, many of the candidates agreed on the need to increase teacher salaries, improve mental health aid for students, boost funding for schools in historically impoverished areas and replace U.S. Education Secretary Betsy DeVos with an official who has experience teaching in public schools.

Despite the debate’s location in Charleston, no questions were raised about climate change, a topic of significant importance in the area as increasing flooding imperils the city.

Several candidates questioned Sanders’ chances of winning back the White House and warned he could have a damaging impact down-ballot on Democratic candidates in other races.

Bloomberg, who is not on the ballot in South Carolina’s Saturday primary, claimed that both Trump and the Russian government want Sanders to become the nominee

“Bernie will lose to Donald Trump,” Bloomberg said, a claim repeated by several other candidates. “The House, the Senate and some of the Statehouses will all go red.” Earlier in the debate, Bloomberg told Sanders, “That is why Russia is helping you get elected so you lose to him."

Buttigieg pointed out that moderate Democratic candidates have sought to distance themselves from Sanders. Charleston’s U.S. Rep. Joe Cunningham, for example, has said he believes “South Carolinians don’t want socialism.”

“They are running away from your platform as fast as they possibly can,” Buttigieg said. “I want to send those Democrats back to the United States House. Let’s listen to them.”

Warren hit Bloomberg for helping to fund U.S. Sen. Lindsey Graham’s 2014 campaign, using it as an example of why she argued he would be a risky nominee.

“The core of the Democratic Party will never trust him,” she said.

Biden notably did not spend extensive time attacking Steyer, who has chipped into his lead in South Carolina polls, particularly among black voters.

But they did have one contentious back-and-forth early on in which Biden noted that Steyer’s hedge fund had invested in private prisons, to which Steyer responded by arguing he thought “they would do a better job” before later selling the stock.

Steyer said he later pushed to end the use of private prisons in his home state of California, prompting Biden to call him “Tommy Come Lately.”

Steyer then hit back at Biden for his role in authoring the 1994 crime bill, saying it “put hundreds of thousands of young black and Latino men in prison.

Asked if he would continue running if he does not win the South Carolina primary, Biden rejected the premise of the question.

“I will win South Carolina,” he said.

Just how important is winning SC to the 2020 candidates? We rated them.

Later in the debate, Biden said he would appoint a black woman to the U.S. Supreme Court.

“I’ve worked like the devil to earn the vote of the African American community, not just here but across the country,” Biden said. ”I’ve been coming here for years and years. The people know me.”