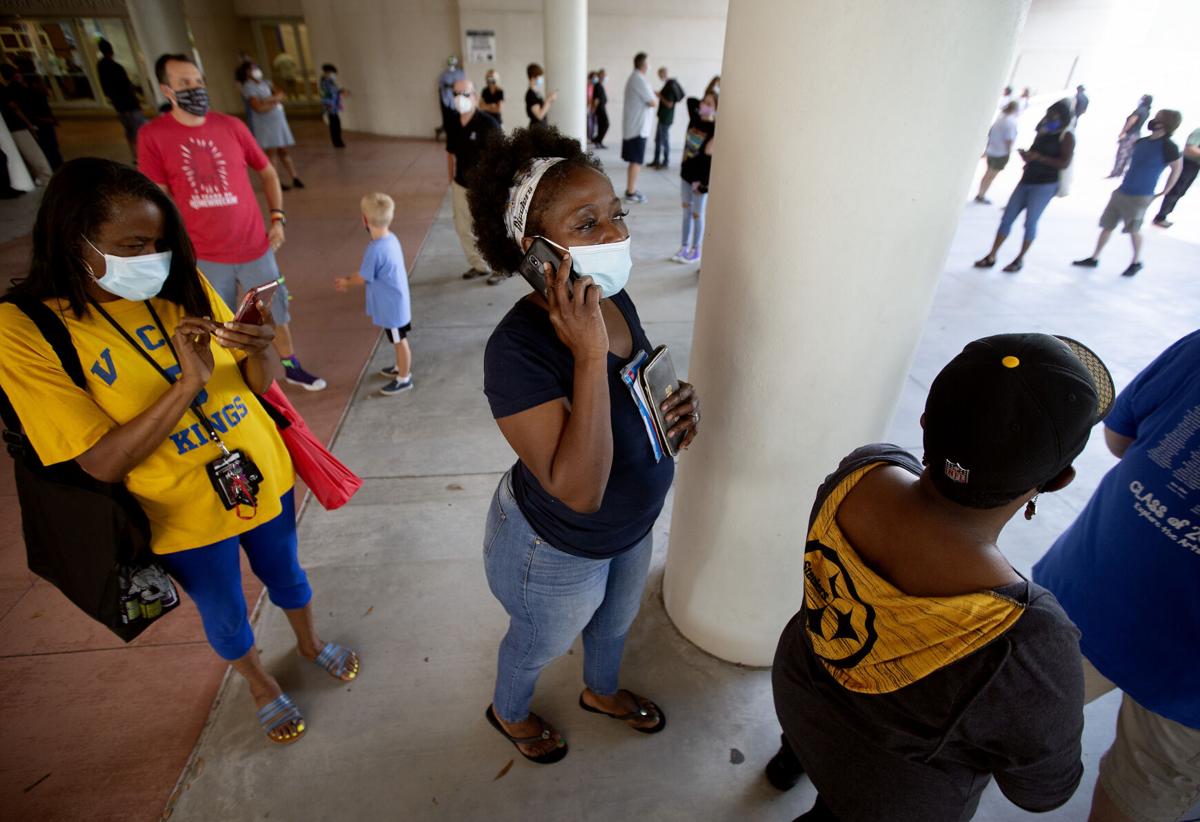 Deshawn Goss, waits on the phone in line with her sister-in-law, Vee Goss (right), to vote absentee at the North Charleston Coliseum on Friday, Oct. 16, 2020. The Goss family, which lives all over the Lowcountry, rallied seven members of their family to vote on the same day. Grace Beahm Alford/Staff 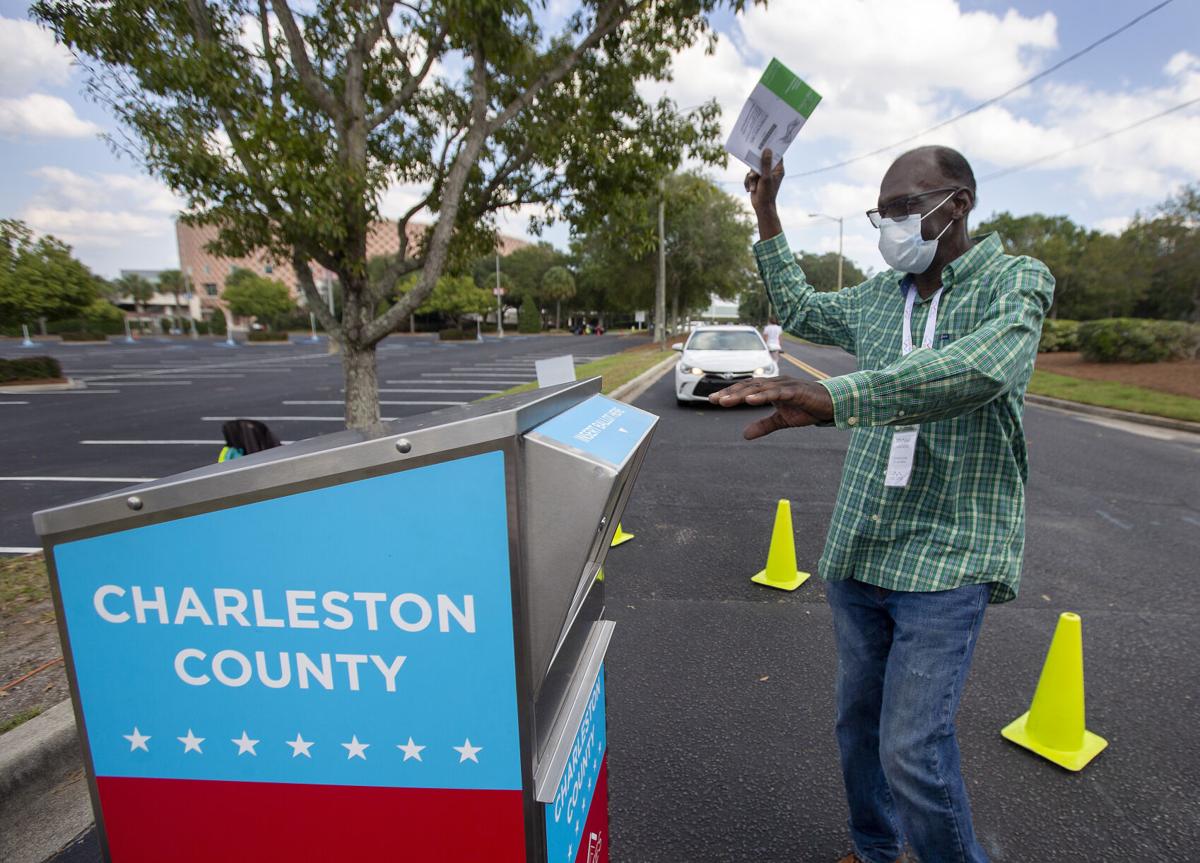 Poll worker Johnnie Hargrove Jr., holds up absentee ballots above his head as voters watch, from their cars, as he places the ballots into the secure box at the North Charleston Coliseum on Friday, Oct. 16, 2020. Grace Beahm Alford/Staff 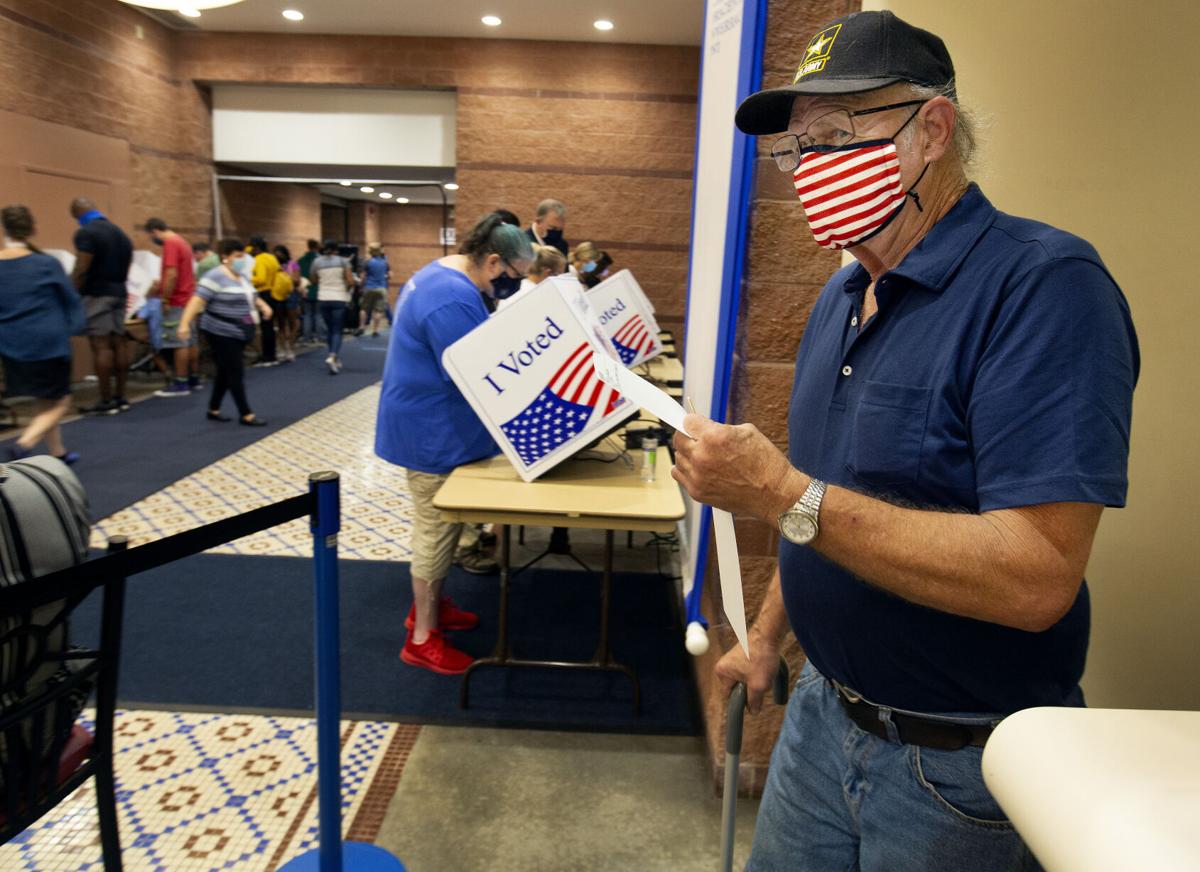 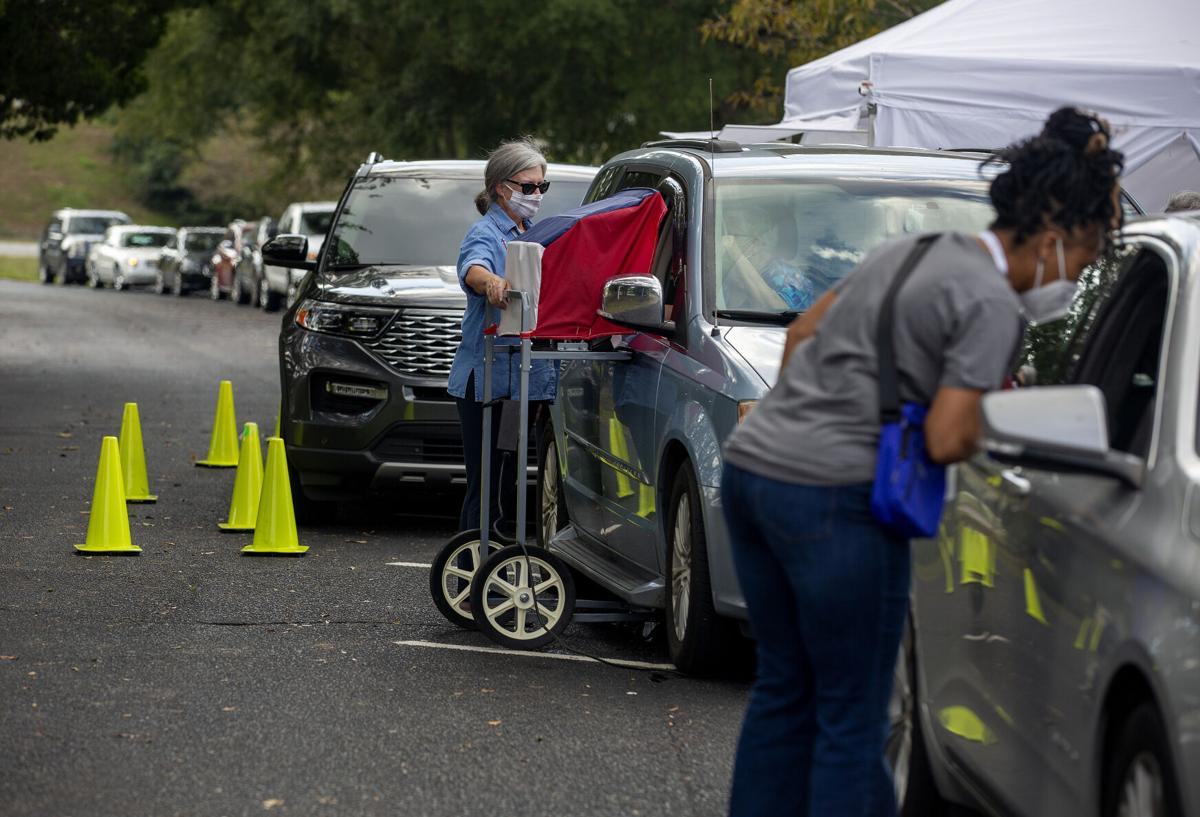 With tens of thousands of South Carolinians heading to the polls early, 2020 is proving to be a historic election even before the first results are counted.

The most votes ever cast in an election in South Carolina was in the 2016 General Election when 2.1 million votes were tallied.

At this pace, election officials expect to surpass that number too as lines to vote early are growing longer all across the state, seemingly spiking daily as Nov. 3 grows near.

For instance, last week at a Berkeley County satellite voting site in the Hanahan Library, the line to vote was still full at the close of business, but those in the queue were allowed to finish and cast a ballot after dark.

Car traffic has been so heavy in the adjacent neighborhood that a shuttle service is being used.

Joe Debney, director of the Charleston County Board of Elections and Voter Registration, said in his 10-year career he's never seen enthusiasm for an election like this.

"Just with the turnout this year alone, there is nothing to compare it to," Debney said. "You can see the energy just in the numbers."

The COVID-19 pandemic and the high-stakes election between President Donald Trump and former Vice President Joe Biden is at the forefront of Americans' minds. High-profile Senate and House races in the state are dominating the news cycle. These three factors help explain the record-breaking number.

But the process hasn't been without problems.

Earlier this month, Charleston County mailed 1,324 incorrect ballots to voters that affected two County Council races in West Ashley. Some party leaders are discussing possible legal challenges to the races that may have been affected.

Various complaints about residents not receiving their ballots, long lines or miscommunication have all sprung up as well, though no allegations of organized fraud have surfaced, which Trump played up in the election build up.

Aiken County residents show up in droves for absentee voting, including at satellite locations

But even with those headaches, some political experts believe 2020 will set a new standard for voting access for future elections in South Carolina and the nation.

Trump faced an impeachment trial in the Senate. The COVID-19 pandemic came to America. Protests and riots relating to racial injustice and police brutality filled cities across the nation, including Charleston and Columbia.

With all of that at the forefront of voters' minds, this year has brought more people to the polls than ever before.

Nearly 50 million Americans have already cast ballots in the 2020 vote, according to the U.S. Elections Project with less than two weeks to go until the general election. More than 772,000 have been returned and collected in the Palmetto State as of Oct. 23.

Andrew Campbell waited at Seacoast Church in Mount Pleasant on the opening day of the satellite polling location. He waited an hour in the long line that stretched across the building's parking lot. But the wait didn't bother him. He was ready to cast his ballot for change, he said, expressing concern about Trump’s hostility and vitriol.

We need someone who will “treat people like people,” he said.

Demetria Stevenson, a Summerville resident, said she hopes that after the election more is done to address concerns around Black people dying at the hands of police.

“I think that’s an important issue in our country regardless of who’s president,” she said.

She was relieved that early voting was offered this year. Her husband’s birthday is on Nov. 2, and they had plans to be out of town.

Trying to make it back in time to vote would’ve been a stressful and rushed process. Her husband cast his vote earlier, and she was making sure that all of her children voted early, too.

She said she’s happy some states are recognizing it’s more about a person voting than when they cast that vote.

Of about 14.1 million returned mail ballots across the nation tracked by the U.S. Elections Project, registered Democrats have sent in 54.5 percent, compared with 23.5 percent by Republicans and 21.5 percent by voters with no party affiliation.

But GOP supporters are slowly closing the gap with in-person absentee voting every day.

Republican Gov. Henry McMaster said he hasn't been to the polls yet and plans to walk down the street from his Columbia home with his wife to vote on Election Day. The avid Trump supporter said that was his preference, but was happy to see the record number of people voting absentee.

He didn't express worries for widespread voter fraud or error and was optimistic to see so many people engaged with the election.

"It's always good when people are getting out and voting," McMaster told The Post and Courier. "There's always concerns ... but I think the technology is such now that I don't believe that will happen. I encourage citizens, if they see something, to say something."

In September, South Carolina sample ballots were publicly posted and excluded the Democratic presidential ticket. When The Post and Courier brought the omission to light, Biden and vice presidential candidate Kamala Harris were added.

The Charleston County error involving the errant mailed ballots was quickly remedied with new ones issued but some damage was already done. According to the county, 225 people received the wrong ballot for Districts 6 and 7, which affected two Charleston County Council races and voted in-person. State law does not allow those votes to be replaced.

"We may be in a position to get into requiring a repeat election," Colleen Condon, chair of the Charleston County Democratic Party, said in a statement after the error was discovered. "If for some reason a Democrat loses by less than 700 votes, it’s something we’d have to look at."

Other complaints have come from long lines at in-person absentee voting locations.

Berkeley County poll worker Alfred Seabrook pulled into the parking lot of the Hanahan Library on the opening day of the satellite polling location and the line to vote had already extended out to Murray Drive.

Seabrook arrived 30 minutes early for the 9 a.m. opening. He said he wasn’t sure what to expect during the first day of early voting in Hanahan.

“I thought there would be a line, just wasn’t sure how long it would be,” Seabrook said. “I think everyone was just trying to vote and get into work.”

Debney encouraged voters to expect to wait in line and to vote in-person absentee if there seems to be a delay in the mail for a ballot.

“Just be patient,” Debney said. “Every staff person is working as hard as they can to make sure every vote is counted. They’re energetic and excited to be a part of it."

Debney said making voting efficient through mail-in ballots and more absentee voting locations may be a part of the norm for future elections if state and national lawmakers make it a priority in the future.

And while worries about foreign influence were rampant during the 2016 general elections, additional safeguards have been put in to stop any possible interference with the vote.

Voting equipment was tested and certified by a testing laboratory approved by the U.S. Election Assistance Commission. Cyber and physical security assessments and penetration tests are performed to identify any vulnerabilities.

"We want voters to know that we recognize our country’s elections face numerous threats," said Chris Whitmire, a spokesman for the S.C. Election Commission. "We have made it our top priority to take all reasonable measures to improve and protect the security and resilience of our state’s election infrastructure."