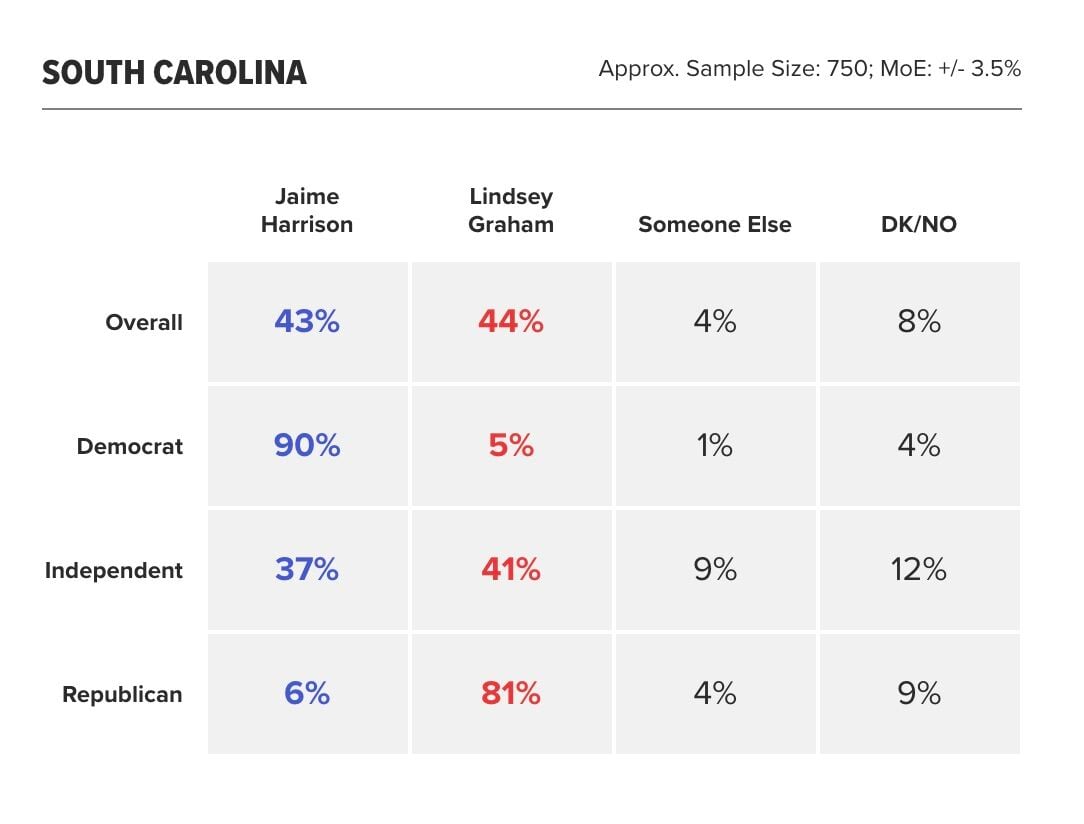 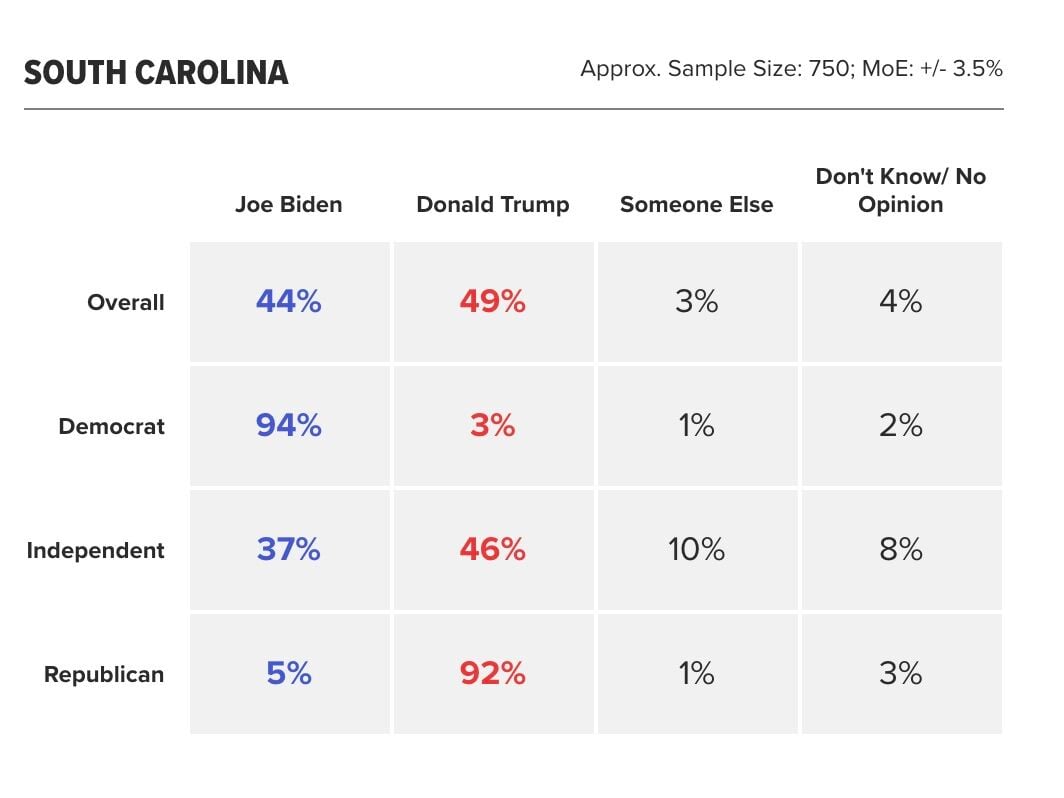 Graham led Harrison by just a single percentage point, 44 percent to 43 percent, in the poll conducted by data intelligence firm Morning Consult, well within the survey's 3.5-point margin of error.

The survey of 750 likely voters in South Carolina, which was conducted online from July 24 to Aug. 2, offers one of the first snapshots of the Palmetto State races from a nonpartisan, independent pollster, appearing to confirm Democratic claims that the contests are growing tighter.

The discrepancy between Trump and Graham's numbers can largely be attributed to independent and Republican-identifying voters.

While Trump had support from 46 percent of independents and 92 percent of Republicans, Graham only garnered 41 percent and 81 percent from those two groups, respectively.

More Republican voters — a total of 13 percent — said they either didn't know who they would vote for or would vote for "someone else" in the Senate race compared to the presidential, where that number was just 4 percent.

Though Graham has become one of Trump's most loyal congressional allies in recent years, he has previously battled skepticism from some Republican voters who felt he was insufficiently conservative due to his willingness to strike compromises with Democrats on issues like immigration and his criticism of Trump during the 2016 campaign.

Graham won his Republican primary in June with 68 percent of the vote over three little-known challengers. There will be Libertarian Party and Constitution Party candidates on the ballot in November, a factor Harrison has cited as a potential draw for Republican voters to split their tickets.

No Democrat has won a U.S. Senate race in South Carolina since 1998. Trump defeated 2016 Democratic nominee Hillary Clinton by 14 percentage points in the state.

But Harrison, a former S.C. Democratic Party chairman and aide for U.S. Rep. Jim Clyburn, D-Columbia, has been a remarkably formidable fundraiser, harnessing national animosity towards Graham on the left to break state records with massive hauls that have mitigated the incumbent's initial advantage.

Harrison's millions have allowed him to blitz the TV airwaves in South Carolina months in advance of the election, bolstering his name recognition among voters and hitting Graham for his allegiance to Trump. Graham's campaign has recently ramped up its own ad spending, highlighting how much of Harrison's funds come from out of state.

Graham's campaign downplayed the poll, with spokesman T.W. Arrighi saying an online survey "excludes the opinions of numerous voters" and the results "are far different than what our internal polling shows."

"But one thing is consistent in all polling," Arrighi added: "The more voters find out about how radically liberal Jaime Harrison is, the less they support him."

"Lindsey Graham should be feeling the heat this summer, and he can no longer take the people of South Carolina for granted," King said. "As senator, Jaime will fight to bring strong character and values back to Washington, where politicians, like Lindsey Graham, are playing political games instead of fighting for us."

In other polls released Tuesday by the same firm, Republican U.S. Senate candidates held sizable leads in the Texas, Alabama and Kentucky, suggesting South Carolina was unique among that group of traditionally conservative states. Morning Consult was among the most accurate national pollsters in the 2016 presidential election.