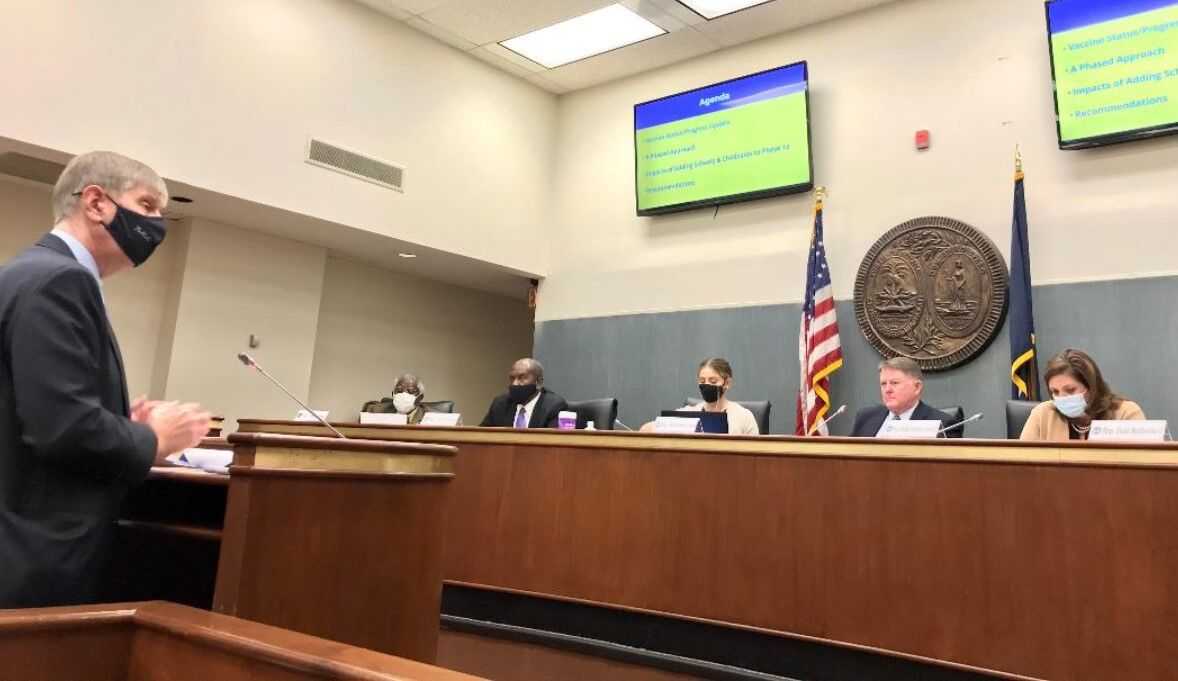 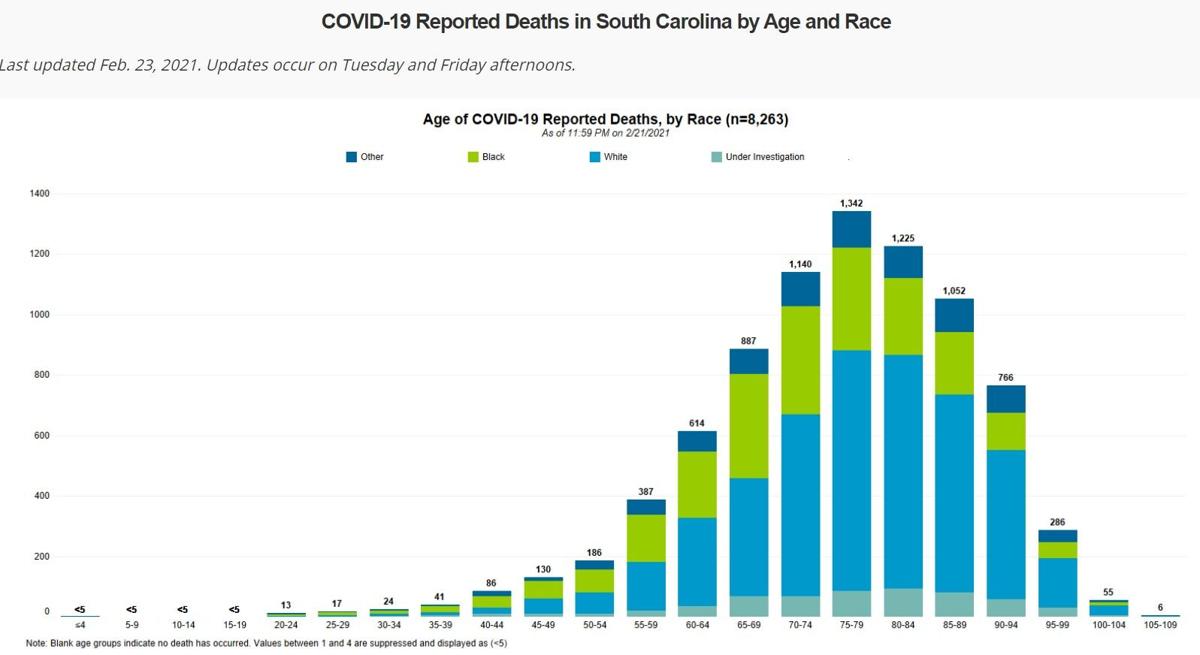 This DHEC bar graph, updated twice weekly, shows the age ranges of South Carolinians who have died from COVID-19. This screenshot shows the latest update, as of midnight Feb. 21. DHEC/Provided

COLUMBIA — Unless South Carolina's public health agency is forced to change the rules, teachers and other essential workers could become eligible for COVID-19 vaccines in mid-March, the department director told legislators Feb. 23.

The state Department of Health and Environmental Control plans to move to the second eligibility phase once residents 65 and older no longer fill available appointments.

"My goal is no open appointments," DHEC Director Edward Simmer told a House panel. "We estimate we’re at least two to three weeks away from having open appointments because there are still that many seniors in line who want this vaccine and can’t get it right now because we don’t have enough."

Summer is the earliest that South Carolinians who are not listed as essential workers or have underlying health conditions could become eligible for the vaccine, DHEC has said.

At Simmer's urging, the House panel delayed voting on measures that would force DHEC to make K-12 school employees immediately eligible. It's unclear when — or if — the panel will consider the legislation again. It is unlikely to advance any further. The bill, passed by the Senate two weeks ago, probably couldn't become law until mid-March anyway.

The meeting came a week after the proposal to prioritize educators brought a parade of advocates for other groups before the panel to ask that they get priority status, too.

The 1.3 million South Carolinians currently eligible for a shot as part of the initial Phase 1A include anyone 65 and older, health care workers, and medical first responders. Nearly 560,000 residents had gotten at least their first shot by Feb. 23, according to DHEC.

They include people who weren't supposed to get one yet, though how many is unclear.

For example, law enforcement officers and firefighters who are not directly involved in emergency medical care are supposed to wait until the next phase, though many have already been vaccinated. DHEC officials have acknowledged confusion over the eligibility categories. But they're clamping down on rule-breakers. On Feb. 23, Horry County Fire Rescue became the first vaccine provider to have its future allocations withheld.

Beyond teachers and day care workers, the next phase, dubbed 1B, is also set to include bus drivers, grocery store clerks, and manufacturing employees — an estimated 573,500 people in all.

"There’s nothing to ensure we’ll get the first appointments. We’ll be ready to go and knocking on your door but there’s no priority set in that 1B group," she told Simmer. "Everybody’s going to be chomping at the bits together. I’d like for us to have some priority."

The panel's chairman, Bluffton Republican Rep. Bill Herbkersman, asked Spearman and Simmer to work together on a plan.

As a visible argument for vaccinating seniors first, Simmer pointed to a bar graph showing that 82 percent of the more than 8,000 South Carolinians who have died with COVID-19 were 65 and older. It's a statistic that Gov. Henry McMaster, who has the last say in vaccine eligibility rules, has cited repeatedly in refusing calls to add educators to Phase 1A.

The average age of a teacher in South Carolina is 43, according to the state Education Department.

Certainly, people younger than 65 "can get COVID and die from COVID," Simmer said. "There is risk there, but it’s much lower risk than for our seniors. That’s why it’s very important to us and we’re recommending we do seniors first."

The legislation passed by the Senate would add about 150,000 people to the eligibility list, as it includes all K-12 public and private school employees, as well as day care workers.

But less than 60 percent of public K-12 employees, or roughly 71,000, are currently willing to roll up a sleeve, Spearman said.

Every school district has partnered with a vaccine provider to get shots in arms as soon as their employees are eligible, she said, noting 30 states have already put teachers on the list.

"I never intended to pit one group against the other. My intent is to take away any excuse of a school person saying, 'We can’t open up.' They need to be open," Spearman said. "If something doesn’t happen pretty soon, school’s going to be out. We’re running out of time."

Even while recognizing the legislation wouldn't require it, Simmer gave a scenario for what could happen if the state halted all appointments and designated two weeks' allotment to K-12 employees, to cover first and second doses.

"We estimate we'd have an extra over 400 hospitalizations among seniors just by that two-week delay, an extra 3,500 cases among seniors," he said. "Let's vaccinate the folks at highest risk first, help save their lives as much as we can."

Before all South Carolinians are eligible for the vaccine, the state has phase 1C that includes anyone 16 and older with a specific set of underlying health conditions including cancer and kidney disease, and essential employees working in transportation and logistics, food service, housing construction, information technology, the legal field and the media. Phase 1C is estimated to start in late spring.