One week after testing positive for COVID-19, South Carolina Republican congressional candidate Nancy Mace has sent a cease-and-desist letter to Facebook, demanding the social media giant stop running an ad that urges people to get tested if they have come into contact with her within the past two weeks.

The ad was created by 314 Action, a national political action committee that spent more than half a million dollars on advertising to help get Democrat Joe Cunningham elected in 2018.

The Washington, D.C.-based super PAC has long promised to be a heavy player in South Carolina's 1st Congressional District race, where Cunningham is trying to defend his seat in one of the top U.S. House races in the country.

The ad in question started running on Friday, some three days after Mace announced she had tested positive for the novel coronavirus.

The digital spot labels itself as a "health alert."

It also claims Mace cast a ballot on June 23 "without a mask" and was "shaking hands with South Carolina voters" one day after learning "she had been in close contact with someone diagnosed with COVID-19."

It calls the congressional candidate's actions "irresponsible," and states her choices "may have put you and your family in danger."

Reached for additional comment on Monday, the Mace campaign confirmed their candidate did not vote curbside and physically entered the polling place to cast a ballot. Poll workers wore gloves, masks and a plastic divider separated poll workers from voters.

The campaign also said Mace was tested after she voted, not before. 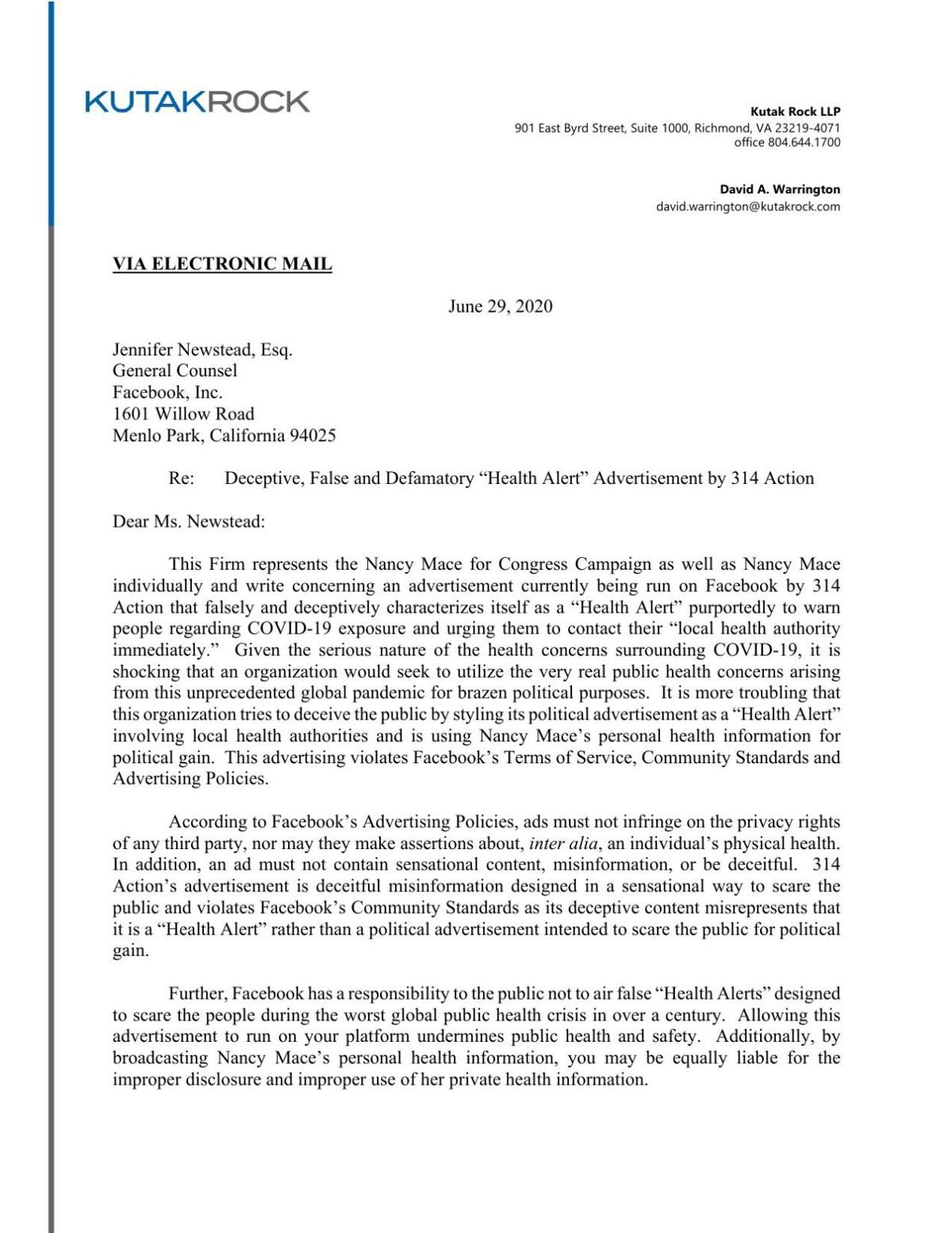 A letter from the campaign's general counsel, David A. Warrington, calls the ad from 314 Action "false and deceptive in all respects," saying it was "designed to scare South Carolina voters" by calling itself a "health alert." 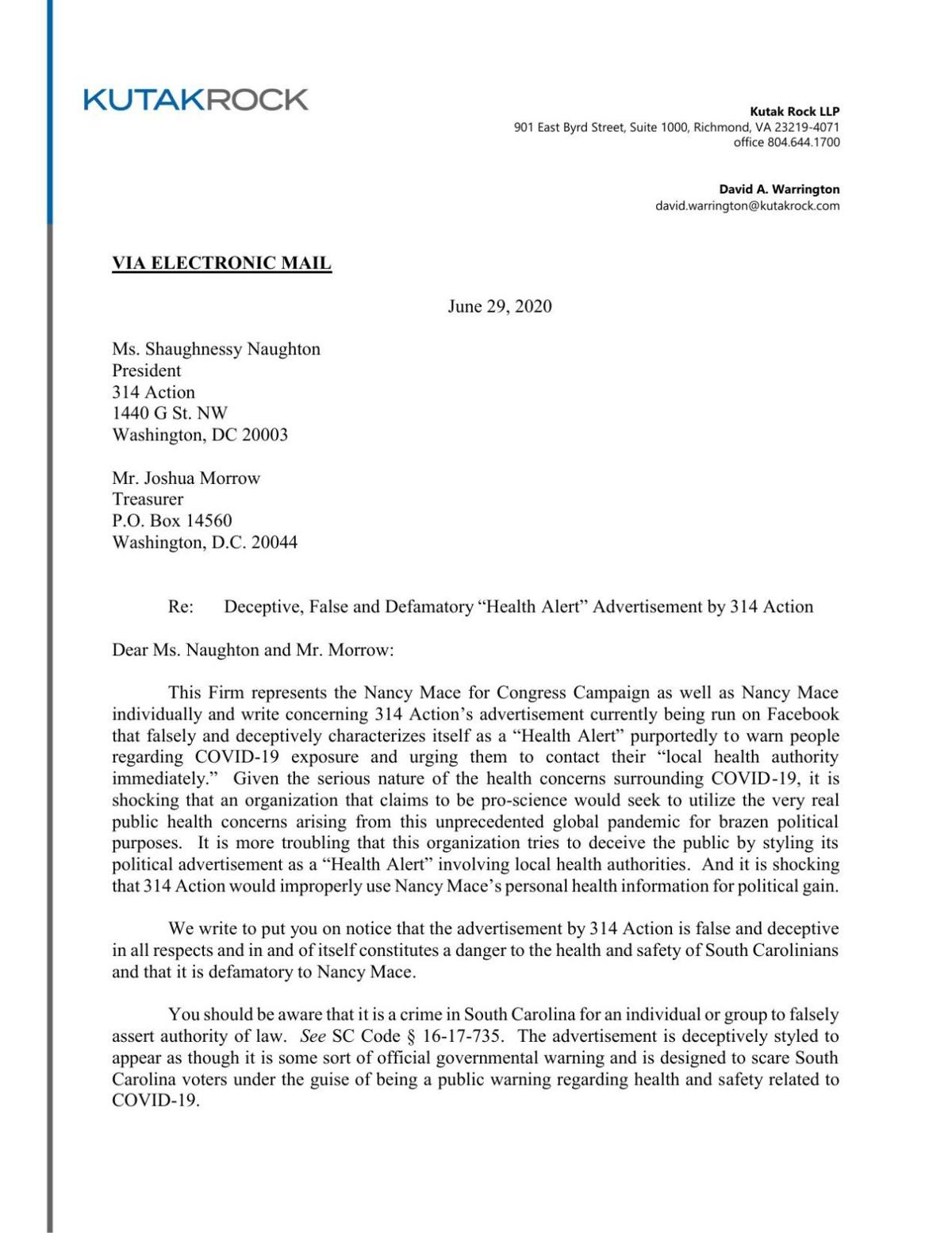 A separate letter was also sent to 314 Action, the organization responsible for the political ad. That letter also demanded the ad stop running.

"Public debate about policies and issues are fair game. Lies, deception and defamation are not," the letter to 314 Action stated.

Both letters also seek to set the record straight about whether Mace knowingly put voters at risk when she voted in-person for the June 23 Republican primary runoff elections.

"Nancy Mace wore a mask when she visited her polling place on June 23rd and she did not shake hands with any voters. In fact, when she arrived at the polling place to vote at 7:15 a.m. that day, she was the only voter there," the letter from Warrington states.

Warrington is a Richmond-based attorney who is also the president of the Republican National Lawyers Association.

Brooke Bainum, a spokeswoman for 314 Action, said the ad will not be taken down.

"The facts are clear and indisputable and they're all from Nancy Mace herself: On Monday night, Mace was informed she had potentially been exposed to COVID-19. She woke up Tuesday morning — after exhibiting symptoms over the weekend and knowing she might have COVID-19 — and still chose to go to a public polling place. Nancy Mace recklessly put other people's health at risk," Banium said in a statement provided to The Post and Courier. "The real question for South Carolina voters is, would you have wanted to be the next voter in the booth after Nancy Mace?"

Both Mace and Cunningham, who will face each other in the November general election, have experienced the virus.

Cunningham tested positive in March and has since recovered. Mace remains in quarantine for another week, or until she tests negative.

"Right now, all I care about is making sure my family gets better," Mace said in a media statement Monday.

In recent days, Cunningham has been calling for a statewide mask mandate. So far, more than 30,000 people in the Palmetto State have tested positive for the virus.