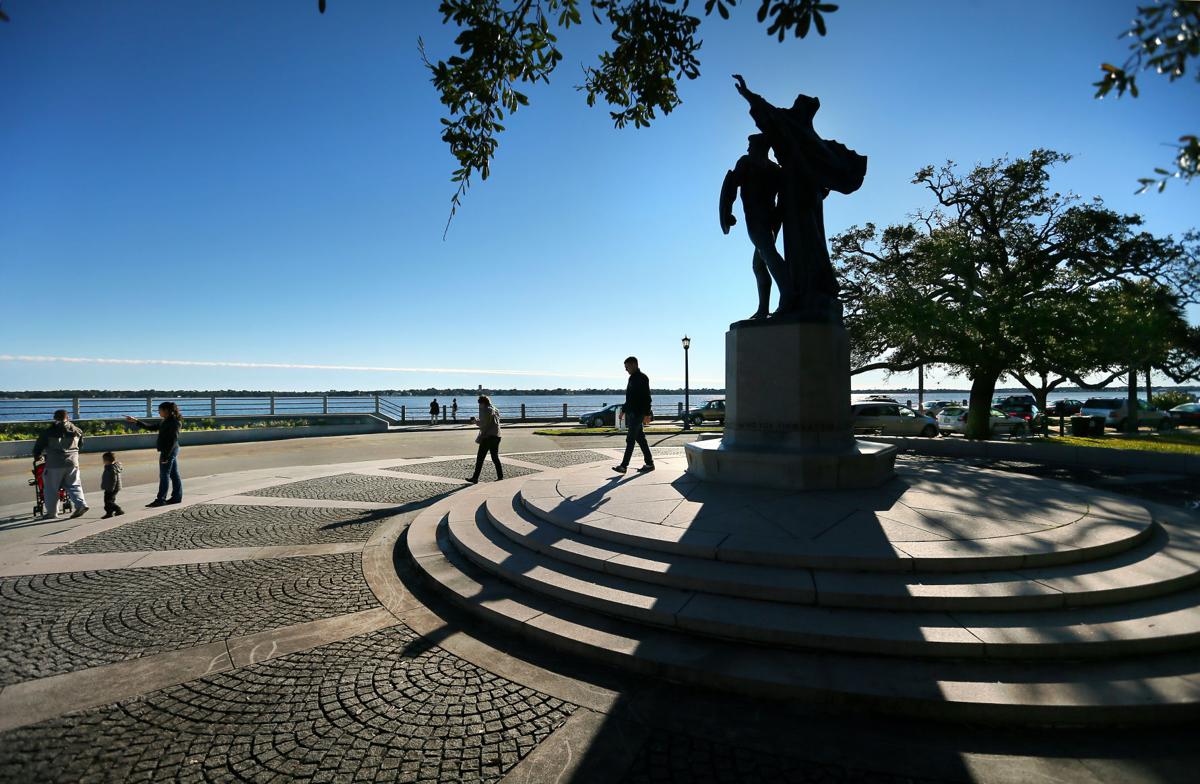 A family from Belgium stopped by this Confederate monument on their walk around The Battery Monday, Dec. 17, 2018. Wade Spees/Staff 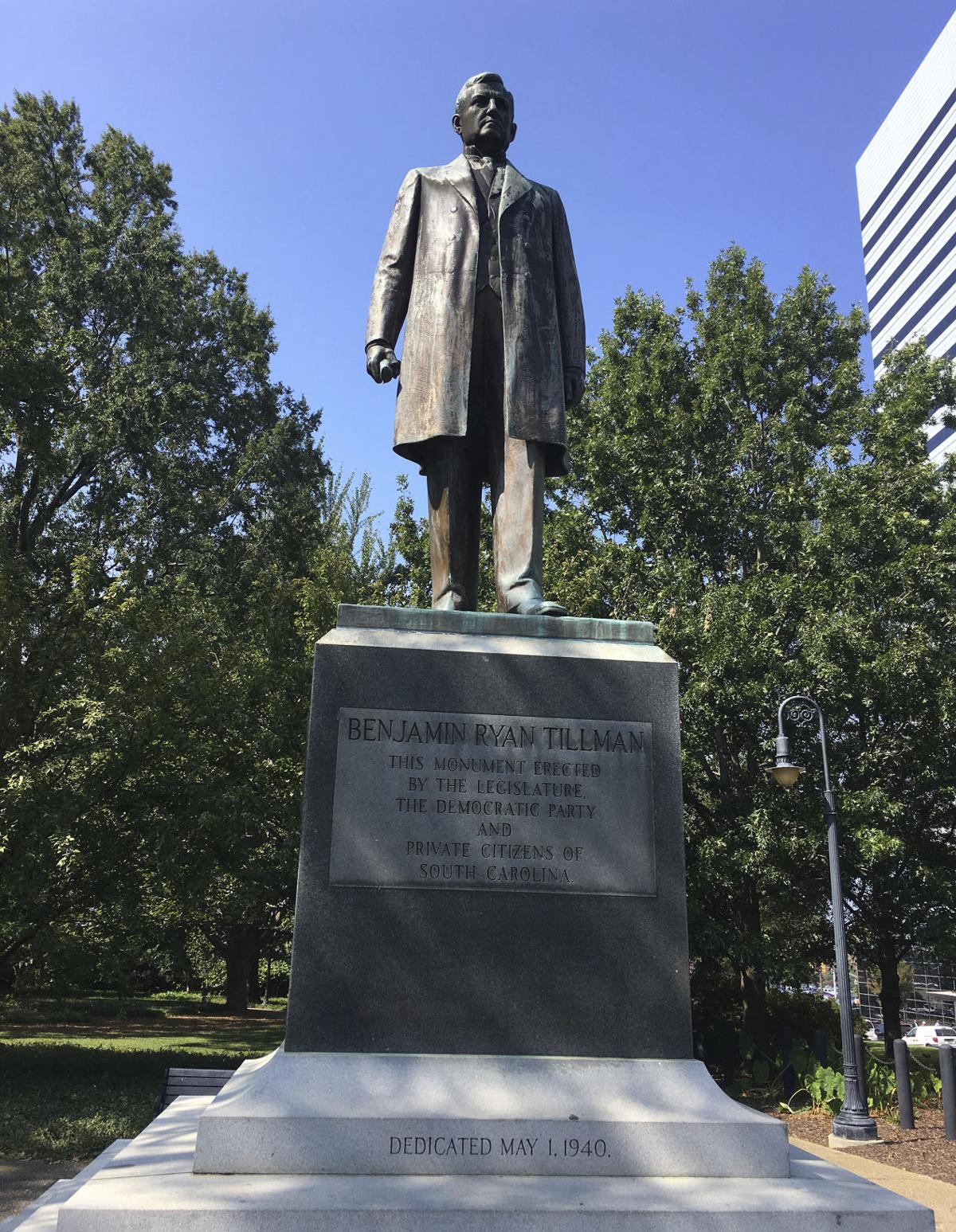 A statue of Ben Tillman stands on the S.C. Statehouse grounds. File/Seanna Adcox/Staff 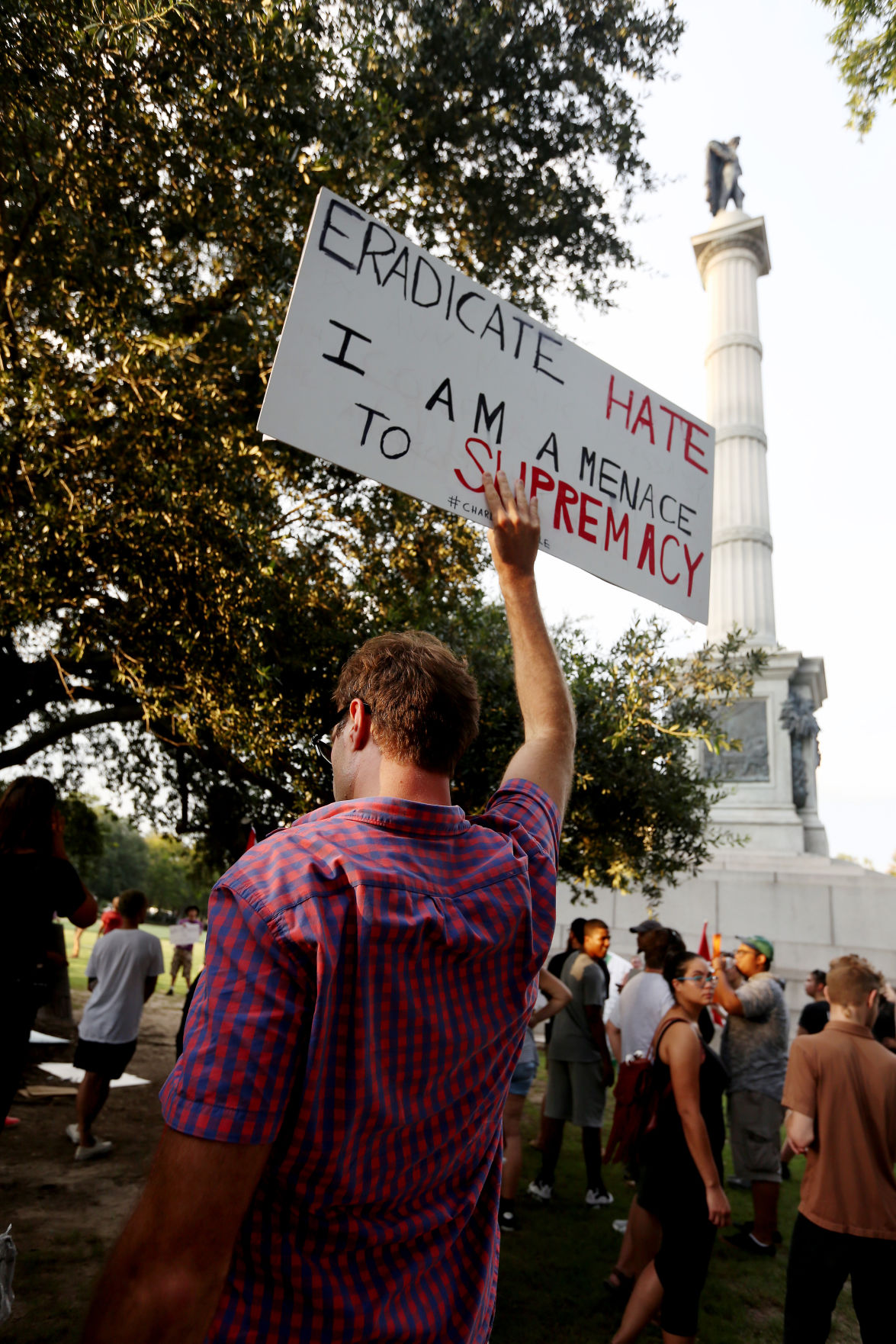 Activists gathered in Marion Square at a planned rally calling for the removal of the Calhoun and Confederate monuments on Wednesday, Aug. 16, 2017. File/Grace Beahm Alford/Staff

A family from Belgium stopped by this Confederate monument on their walk around The Battery Monday, Dec. 17, 2018. Wade Spees/Staff

A statue of Ben Tillman stands on the S.C. Statehouse grounds. File/Seanna Adcox/Staff

Activists gathered in Marion Square at a planned rally calling for the removal of the Calhoun and Confederate monuments on Wednesday, Aug. 16, 2017. File/Grace Beahm Alford/Staff

Southerners are still reckoning with how Civil War dead and segregation-era figures should be honored in public spaces, and a new poll has found divided opinions over what these symbols mean.

A Winthrop University poll of 969 residents in the 11 Southern states that seceded from the Union has found a majority of respondents want some action taken regarding Confederate monuments, but they aren't united as far as what they'd like to see happen.

"All told, 56 percent want to do something other than simply leave the monuments and statues as they are, but these folks are very divided on what should be done," said poll director Scott Huffmon. "A strong plurality advocate leaving them as they are."

The results carry an error margin of plus or minus 3.15 percent. Winthrop University is the most consistent surveyor of voter moods in South Carolina, issuing its polls several times a year.

Forty-two percent of the Southerners surveyed said Civil War memorials should be left alone, but 28 percent said they'd like to see them modified with a new plaque that adds historical context.

About a quarter want to move the statutes to museums, while only 5 percent want to remove them completely.

When it comes to memorials that honor politicians and leaders who supported racial segregation, Southerners were less sympathetic.

Another 26 percent said such statues should be put in a museum, while 13 percent wanted them removed completely.

Along racial lines, the splits are even greater. Thirty-seven percent of African Americans polled said statutes of known segregationists should be put in a museum while 25 percent said they'd like them removed. Meanwhile, 30 percent of whites said the statues should stay, compared to 34 percent who would like to see a marker added.

The complexities of the debate played out in Charleston City Hall earlier this year, when some City Council members tried and failed add a plaque to the towering John C. Calhoun monument in Marion Square.

The effort stalled when members couldn't agree on the language.

In response, South Carolina legislators in July 2015 voted to remove the Confederate battle flag from its spot next to the Confederate soldier's monument on the Statehouse grounds.

For any historic monument to be removed in South Carolina, the Heritage Act requires a two-thirds vote by members of the Statehouse. The law has been in place since 2000.

Keeping the monuments in place does have supporters outside the Statehouse Dome. The American Heritage Association of South Carolina, a recently formed nonprofit, has been fighting to keep the state law in place as part of a larger effort to preserve monuments.

A group spokesman said the plaque and context addition idea, though it may sound simple, can create issues.

Barry reiterated that his group believes monuments of all kinds should not be decided by what he called “mob rule.”

Additionally, the group has also called on lawmakers to add a provision to the Heritage Act to allow illegally removed monuments to be put back in place within 90 days.

During his gubernatorial campaign, Gov. Henry McMaster stated he supported the Heritage Act "as it is."

That has not stopped state lawmakers from challenging the law. State Sen. John Scott, D-Richland, has pre-filed a bill for the legislative session that begins in January that would eliminate the Heritage Act.

The efforts to remove Confederate symbols were renewed again after last year's violent Unite the Right rally in Charlottesville, Va., where one person was killed and dozens were injured after a man drove his car into a crowd of anti-racist marchers.

In North Carolina, the state's flagship university is in turmoil over what should be done with "Silent Sam," a bronze Confederate statue seen by some as a symbol of racism and seen by others as a historical monument.

Protesters pulled down Silent Sam down in August, damaging it and forcing University of North Carolina officials to determine its fate. No consensus has been reached.

Behind 'Silent Sam's' toppling at UNC, a lesson for South Carolina, historians say

The toppling of a Confederate monument in Chapel Hill, North Carolina was fueled in part by overt white supremacy voiced during its 1913 dedication. Some also feel the state' restrictive heritage law played a big role.

The Southern Poverty Law Center earlier this year reported some 110 monuments and other symbols of the Confederacy have been removed nationwide since the summer of 2015, but it also found 1,740 Confederate monuments, street names and other symbols still stand in public spaces.

The list, which has been continuously updated since its release, counts 195 symbols in South Carolina, including 13 in Charleston County, where nine are streets named after Confederate leaders.

With 38, Richland County has the most Confederate symbols in the state, where 29 are roads and highways, according to the count.

The SPLC began tracking the symbols after the 2015 shooting in Charleston. Its first "Whose Heritage?" report in 2016 found 1,853 Confederate symbols nationwide.

What these symbols even mean to Southerners is up for debate.

Southern attitudes toward Confederate monuments weren't the only issues polled by Winthrop University. Here are some additional findings of note:

Was America founded as an explicitly Christian Nation?

Fifty-one percent of residents in the 11 Southern states polled said they either agree or strongly agree that America was founded as an explicitly Christian nation.

Poll director Scott Huffmon said this viewpoint is a crux of so-called "Christian Nationalism," where individuals believe the United States should be governed as as an explicitly Christian nation.

Of the Southern white evangelicals polled, 66 percent said they agreed or strongly agreed this was how America was founded.

“Research has shown that increases in Christian Nationalist beliefs lead to more exclusionary views on immigration and more negative views of multiculturalism in America,” Huffmon said.

“Those who hold these views care more about whether they have a strong leader who will protect their religious and cultural values than whether a leader is individually pious,” he said.

The poll found 80 percent of Republican or Republican-leaning Southerners approve of how President Donald Trump is doing his job.

Overall, Trump holds a 44 percent approval rating among all respondents.

What was the main cause of the Civil War?

The Civil War ended in 1865 but even now the cause of the war continues to be debated in the South. Twenty-five percent of respondents said the war was caused by slavery, while 21 percent said it was about states’ rights.

About half, or 49 percent, said both were equal causes of the war.

Among African-Americans, 30 percent of respondents said slavery was the main reason for the war while 58 percent said both states’ rights and slavery were the cause.

Does "political correctness" threaten our liberty?

More than two-thirds of respondents said they agree or strongly agree that political correctness threatens  the liberty of Americans to speak their minds. However, Southern Republicans seem to be more concerned than their Democratic counterparts. An overwhelming 84 percent of Republicans responded that they saw political correctness as a threat at some level compared to nearly half of Democrats.

To see the complete Winthrop Poll findings, visit www.winthrop.edu/winthroppoll and click "Current findings" on the left side of the screen.