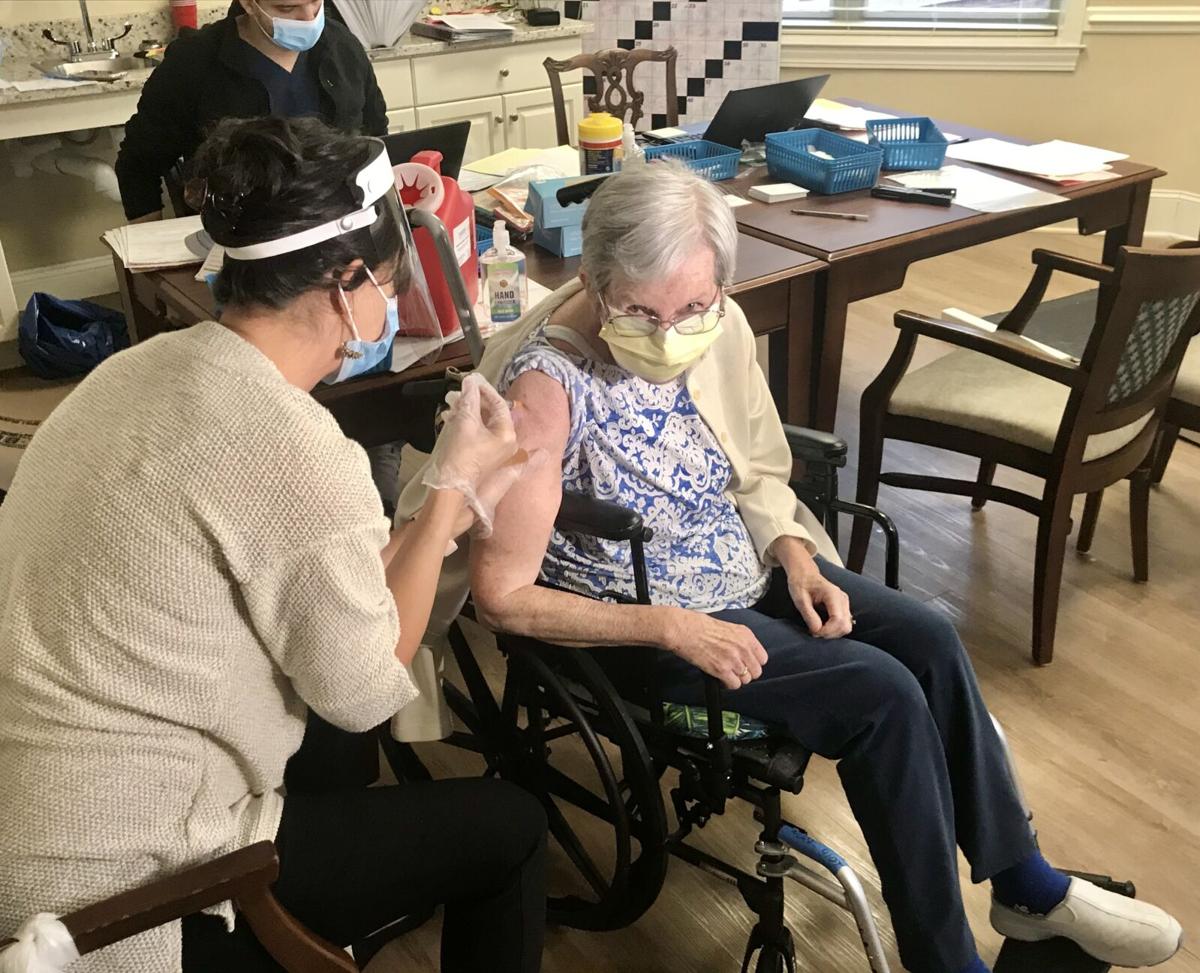 Nora Schafer, 84, receives the Moderna-made COVID-19 vaccine at Wellmore of Lexington on Wednesday, Dec. 30. 2020. The facility was among the first long-term care centers in the Midlands to administer the shots. Vaccines will not be available to many South Carolinians until spring, according to the state's public health director. File/Jessica Holdman/Staff 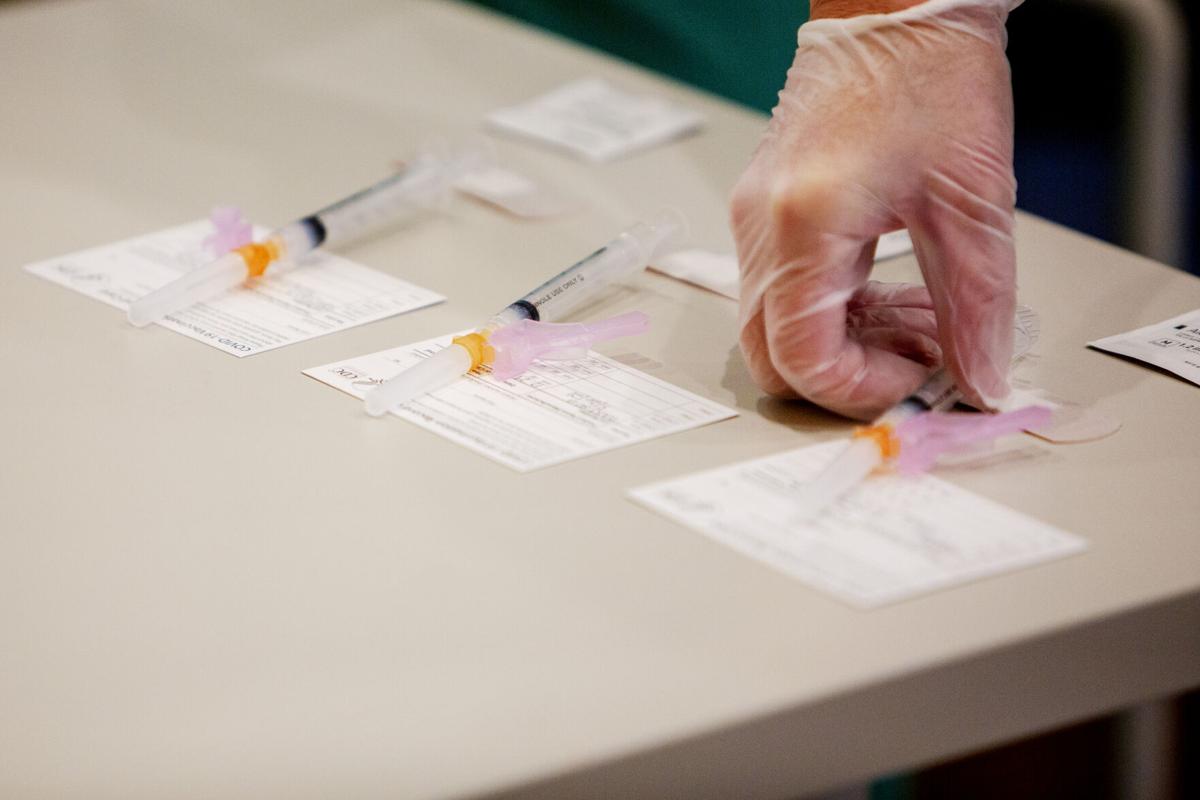 Liliana Shklyar, a pharmacist with CVS, sets aside Moderna COVID-19 vaccine doses Tuesday, Dec. 29, 2020, for staff at the Bishop Gadsden retirement community on James Island. Vaccine appointments are now available to South Carolinians age 70 and older, but availability was low with supply only trickling in. File/Gavin McIntyre/Staff

COLUMBIA — Most South Carolinians will have to wait until at least late spring for the COVID-19 vaccine, the state's public health director said Monday.

With the slow rollout, the first rounds of vaccines being given to front-line health care workers and nursing home residents won't end until sometime in February, said Dr. Brannon Traxler, public health director for the state Department of Health and Environmental Control.

People over age 74, as well as school employees, bus drivers, grocery workers and other critical workers are up next.

South Carolinians who aren't in high-risk categories won't be eligible until at least the spring, Traxler said.

"The phase that includes the general population and vast majority of people is expected to begin in late spring and continue into summer and early fall," she said.

But having large gatherings, such as spring festivals and fall football, won't necessarily require the bulk of the population to be vaccinated, Traxler said.

When people can again fill a stadium or concert venue will depend on a combination of vaccination rates and community spread. People can "step up" by getting a shot when it's their turn and, while they wait, following mask-wearing and social-distancing guidance, she said.

In the last month, there's been a big surge in both newly diagnosed COVID-19 patients and the percent positive among everyone getting a test, an indicator of how quickly the virus is spreading.

"Avoid those large groups so we can get those numbers down to much more reasonable levels," Traxler said. "Combined with increasing vaccination rates, I think the advice for large gatherings would begin to evolve or change."

South Carolina's vaccine rollout remains in Phase 1A, which focuses on front-line medical workers and nursing home residents and staff.

The state won't transition to the next group until 70 percent of those eligible in Phase 1A have been vaccinated, expected in February, Traxler said.

Lawmakers are becoming increasingly vocal about their frustrations with the vaccine's rollout.

By 2020's end, SC has the doses of vaccine it hoped for. Less than a third have been given.

The state has received nearly 130,000 first-round doses of the Pfizer vaccine since mid-December. As of Monday, 33 percent of those had been given. But that reflects only one of the two federally authorized vaccines, meaning the actual vaccination rate could be much lower.

Last week, an additional 84,500 doses of the Moderna vaccine arrived for use in nursing homes and assisted living centers. But DHEC is not yet able to track how many of those have been given. Those dosages are handled through an agreement between the federal government and pharmacists with CVS and Walgreens, who are traveling to long-term care facilities statewide.

Sen. Marlon Kimpson, D-Charleston, told The Post and Courier last Wednesday that at this rate, "we’re going to be having the same conversation this time next year."

Gov. Henry McMaster then directed DHEC to provide public updates on the status of both vaccines.

On Monday, Sen. Tom Davis, R-Beaufort, called on the governor to end DHEC's "restrictive and bureaucratic" rules and open eligibility to more people, including those over age 65, in more places. Currently, the Pfizer vaccine is provided to hospitals only. And the Moderna vaccine is given only at long-term care facilities.

The rollout could move faster if hospitals weren't so overwhelmed by COVID-19 patients, Traxler said.

Hospitals are short-staffed, both by the number of patients filling beds and employees in quarantine themselves. Tamping down community spread could free up hospital workers to vaccinate their colleagues, she said.

Nearly 2,160 people were hospitalized Monday across South Carolina with COVID-19, representing one of every four hospital patients, and 419 of those were in the ICU, according to DHEC.

Also slowing the process are the unprecedented logistics involved in distributing Pfizer's vaccine, which must be stored in ultra-cold freezing temperatures of -70 degrees Celsius, and on such a massive scale. Planning for it and practicing can be different than reality, she said.

But she expects the pace to pick up.

"Rolling out the vaccines to millions and millions of people absolutely as fast as we can is taking a few weeks to get into a smooth rhythm," she said. "I fully anticipate in the next couple weeks we’ll see the vaccine utilization rate really increasing as we get into a familiar cadence."

Who's eligible for vaccination and when shifted some Thursday when DHEC released new eligibility rules that included a new subset of Phase 1.

The changes mean some people who thought their health issues made them eligible next will have to wait longer, while others, including teachers, will be eligible sooner.

Phase 1A expanded to add more health care workers, including dentists, as well as autopsy room and funeral home staff.

Added to Phase 1B's list for critical service jobs, which already included food-processing employees and bus drivers, are employees of schools, day cares and grocery stores, and postal workers. Anyone over 74, regardless of their health condition, also qualifies.

SC residents still have COVID-19 vaccine and antibody questions. Here are some answers.

Phase 1C will wrap in other essential workers, including restaurant and construction employees. It's also when people with preexisting conditions qualify, as long as they're at least 16 years old. People who are at least 65 qualify whether or not they have health problems.

It's not until Phase 2 that the vaccine will be available to people who don't meet age, health or work qualifications. That could take start in the spring, Traxler said.