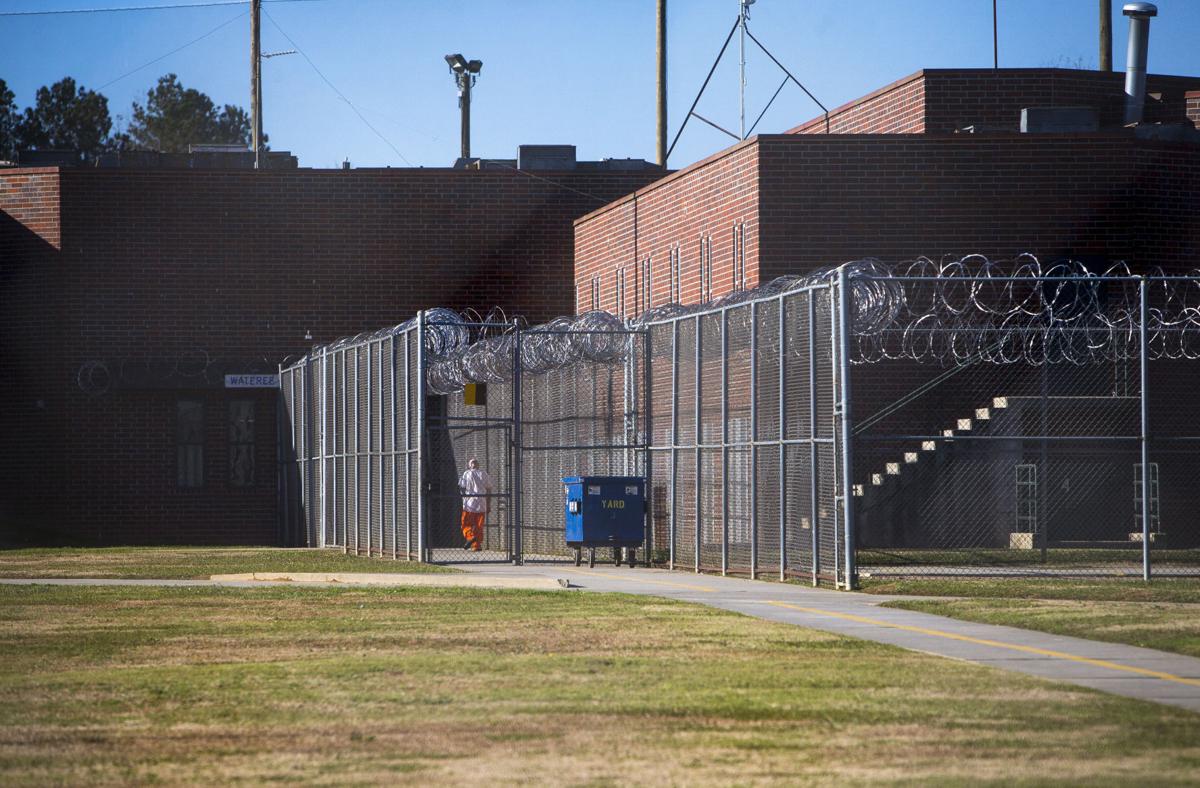 An inmate walks along a fenced area in Broad River Correctional on Tuesday, Dec. 11, 2018 in Columbia. Andrew J. Whitaker/Staff 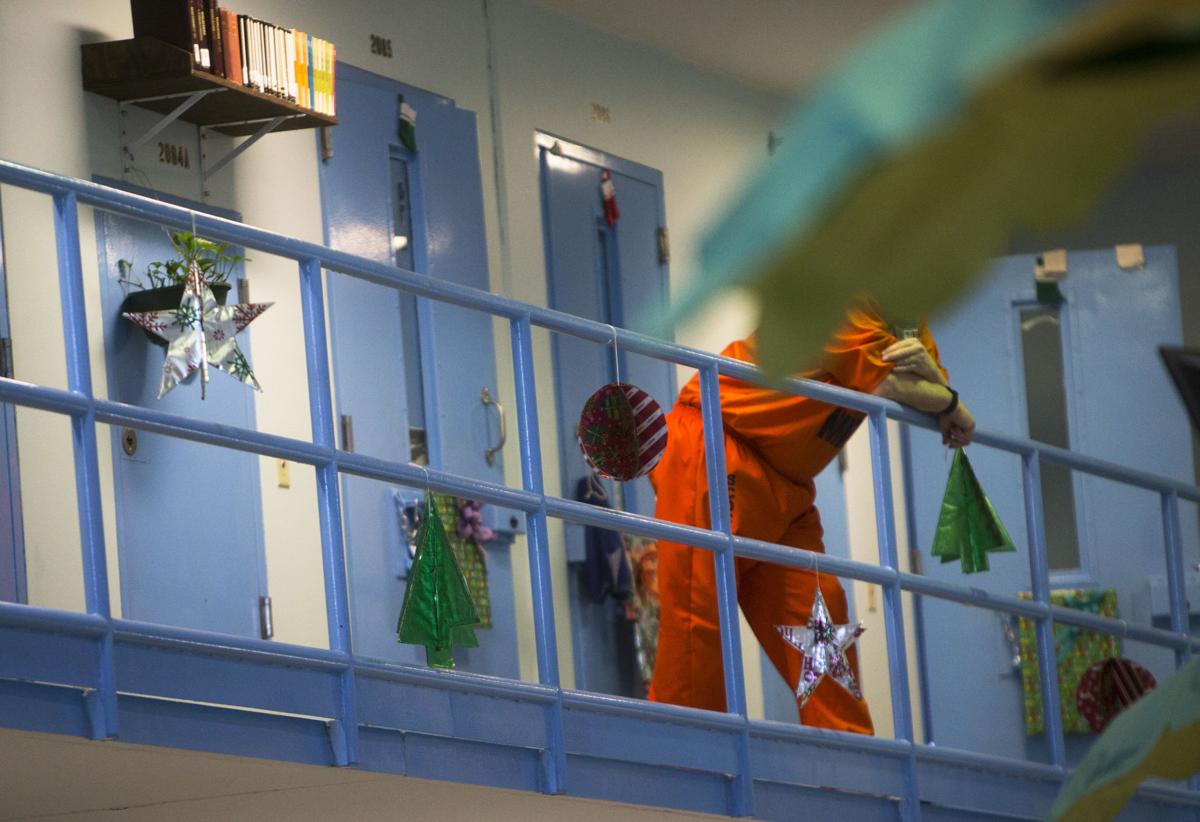 An inmate leans against a railing in Broad River Correctional on Tuesday, Dec. 11, 2018 in Columbia. The agency replaced inmates' tan uniforms with orange ones last June, at a cost of $780,000, so officers can better spot them on recreation yards. The sand-colored uniforms made it harder to detect inmates sneaking to spots to retrieve contraband. Andrew J. Whitaker/Staff

Anticipating the opposition, the Spartanburg Republican quickly added, "We wouldn't dare think of doing that without paying the county."

By law, anyone punished with a sentence of more than three months must be sent to a state prison. That's the lowest minimum sentence in the nation for imprisonment.

Only five other states admit inmates into a state prison on less than a year sentence. Indiana and Ohio are closest to South Carolina, with six-month minimums, according to the Legislative Audit Council's lengthy review of the state prisons agency, released Monday.

Improving operations will require either more staff or fewer inmates, the report noted. It recommended increasing the minimum sentence as one way to accomplish the latter, since South Carolina prisons have struggled for years to hire and keep officers. While vacancy rates are improved from the high three years ago, about a third of the 2,350 officer positions across 21 state prisons were vacant as of Aug. 1. Over the last fiscal year alone, 335 employees resigned, according to the agency.

On average, prisoners spend their first 41 days of state lock-up being processed in Columbia, where they undergo a series of physical and mental screenings that determine where they're sent and their medications, according to the agency.

SC prisons changing the way inmates are classfied and housed

That means people with short sentences can spend the bulk of their incarceration in those reception and evaluation centers, where housing is more expensive because of the testing, auditors said in their 173-page report.

"(Processing) takes a long time. It doesn't make sense to me to take them from where they're from, uproot them and turn them back around," said state Corrections Director Bryan Stirling, who supports the change.

He said he recognizes that counties would need to be compensated for keeping prisoners with short sentences.

No one has proposed a figure. It's unknown what it would take for counties to break even.

During fiscal year 2017-18, state prisons housed 893 inmates on sentences of less than a year.

Inmates coming from Greenville County accounted for the biggest chunk of those, at 153 admitted over the course of the year, followed by 71 from Spartanburg County and 64 from York County.

Lexington County's 50 inmates ranked sixth with Richland County next at 39. Berkeley County sent 27 inmates sentenced to less than a year and Charleston County sent 23, ranking 11th and 12th among the state's 46 counties, according to the prisons agency.

But those are year-long tallies. According to the audit, there are far less on any given day. A single-day snapshot shows there were 124 inmates in prison on June 30, 2018, with sentences of up to a year.

The state Association of Counties has also historically opposed the idea but wants to see more details. The concern is that legislators could push a state problem down to the counties, exacerbating local staffing vacancies and space shortages.

"Who's going to pay for it?" asked Joshua Rhodes, an attorney with the county association. "It's one of those things that sound good, but I don't know how you would make it happen.

"The county jails in several counties are already bursting at the seams as is. They're outdated. They need new facilities," he said, adding that county jails aren't built to provide health care and other services that prisons do.

Some counties may have the space while others don't, Rhodes said.

In North Carolina, a 2011 state law allows anyone convicted of a misdemeanor to serve their time in county jails where the sheriff volunteers the space. The state reimburses the county for keeping the inmate, according to the North Carolina Sheriff's Association, which manages the program.

Tallon has asked a representative of the group to brief his panel later this fall.

"If we can figure out a way to solve those issues," Rhodes said. "Right now, it raises more questions than answers."

Inmates serving less than a year in prison

During fiscal year 2017-18, state prisons housed 893 inmates on sentences of less than a year. The following lists the top 15 counties that sent them:

Eight former South Carolina prison employees, including six correctional officers, have pleaded guilty to federal offenses as part of an investigation into contraband in prisons around the state.

There could be 4,000 fewer inmates in maximum-security prisons in South Carolina a year from now, after they're reclassified under a new system that rewards good behavior

Not sending parolees back to prison on technicalities could boost safety amid South Carolina's chronic staffing shortages, an attorney who has represented inmates told legislators Monday.

The misreading of a judge's handwriting, miscalculations and simple typos have kept at least 40 inmates imprisoned in South Carolina days and even years past when they should have been released