COLUMBIA — In September 2017, then-state Rep. Peter McCoy was listening to SCANA ratepayers from across South Carolina rail against the company's high energy prices during a Statehouse committee hearing when a notification popped up on his phone with some pertinent news.

Investigators were launching a criminal probe into the cancelled construction of two nuclear power reactors — a $9 billion boondoggle considered the biggest business failure in state history — right as McCoy was leading the legislative response as chairman of the panel tasked with addressing the crisis.

Three and a half years later, it will be McCoy in court on Feb. 24 representing the federal government as South Carolina's U.S. attorney when former SCANA CEO Kevin Marsh formally enters his guilty plea for covering up major flaws in the V.C. Summer project while the utility continued bilking ratepayers for the costs.

Marsh's guilty plea will provide a fitting bookend to McCoy's tenure as the state's top federal prosecutor, capping his yearslong effort to hold what used to be one of South Carolina's most powerful companies accountable for their role in the scandal — first in the Statehouse and now in the courthouse.

"It has really come full circle," McCoy told The Post and Courier in an exit interview. "There's a sense of completion and satisfaction in protecting the South Carolina ratepayer and seeing it through to the finish line."

As is customary at the start of any new administration, the U.S. Department of Justice under President Joe Biden asked almost all Trump-appointed U.S. attorneys to step down by the end of the month.

McCoy complied with the request and submitted his letter of resignation to Biden this week, effective Feb. 28, writing that serving in the role was "the honor of my lifetime."

"Working daily with the dedicated public servants of this office to impartially enforce the rule of law, defend our Constitution, and make our communities safer is a privilege for which I will forever be grateful," McCoy wrote.

That means McCoy will be moving on after a little less than a year in the role, with plans to return to private practice. Before becoming U.S. attorney in March 2020, McCoy was a partner at McCoy & Stokes, a small criminal and family law firm based in Charleston. He said he will now be working at a different firm but did not disclose details.

Beyond his legal work, South Carolina Republican circles have been buzzing with speculation about whether McCoy, 42, could soon return to electoral politics. When he became U.S. attorney, McCoy gave up his role as chairman of the S.C. House Judiciary Committee that he'd ascended to a little over a year earlier.

"The sky's the limit for him and his future," said House Majority Leader Gary Simrill. "He is very even-tempered, very pragmatic, very intelligent, and so you saw him rise through the ranks quickly because of that acumen. He's still young and already an accomplished attorney."

The Charleston Statehouse seat he vacated flipped to Democrats in 2020 with the victory of Spencer Wetmore, prompting S.C. GOP Chairman Drew McKissick to say he hopes to persuade McCoy to run for the seat again.

"I think he was very representative of that district and he was a very hard-working candidate, and I think that makes a tremendous difference," McKissick said.

But others expect McCoy to aim higher than that, touting him as a top contender to replace the state's Republican Attorney General Alan Wilson, either in 2022 or 2026. Wilson has yet to announce whether he will run for reelection next year to seek a fourth term in office.

"He's a smart guy, wise beyond his years, politically savvy, and he won in a district that's now proven to be one of those that's not just a Republican slam dunk district," said veteran S.C. Republican strategist Walter Whetsell. "That's the kind of candidate you're looking for as a party."

Even Democrats who have worked closely with McCoy say he's the type of figure they would like to see in a higher profile role, extolling his willingness to work across the aisle.

"If I was a betting man, I'd certainly bet that you're going to see Peter McCoy's name on a ballot again somewhere in the future, and I hope that's the case," said state Rep. Russell Ott, D-St. Matthews, who co-chaired McCoy's special House committee that worked to reform South Carolina's utility laws after the V.C. Summer debacle.

McCoy acknowledged that he has thought a lot about a return to the political arena, though not about any specific positions.

"Public service is very important to me," McCoy said. "I think giving back to the state is one of the highest honors anyone can do. So, absolutely, that will definitely be on my mind and something that the door will always be open for."

"Peter McCoy did a good job as U.S. attorney and is qualified for all sorts of positions," McMaster said. "He is a highly regarded man, lawyer, with a fine family. I don't know what he's going to do, but I wish him well because we have an enormous amount of talent in South Carolina and he's certainly part of it." 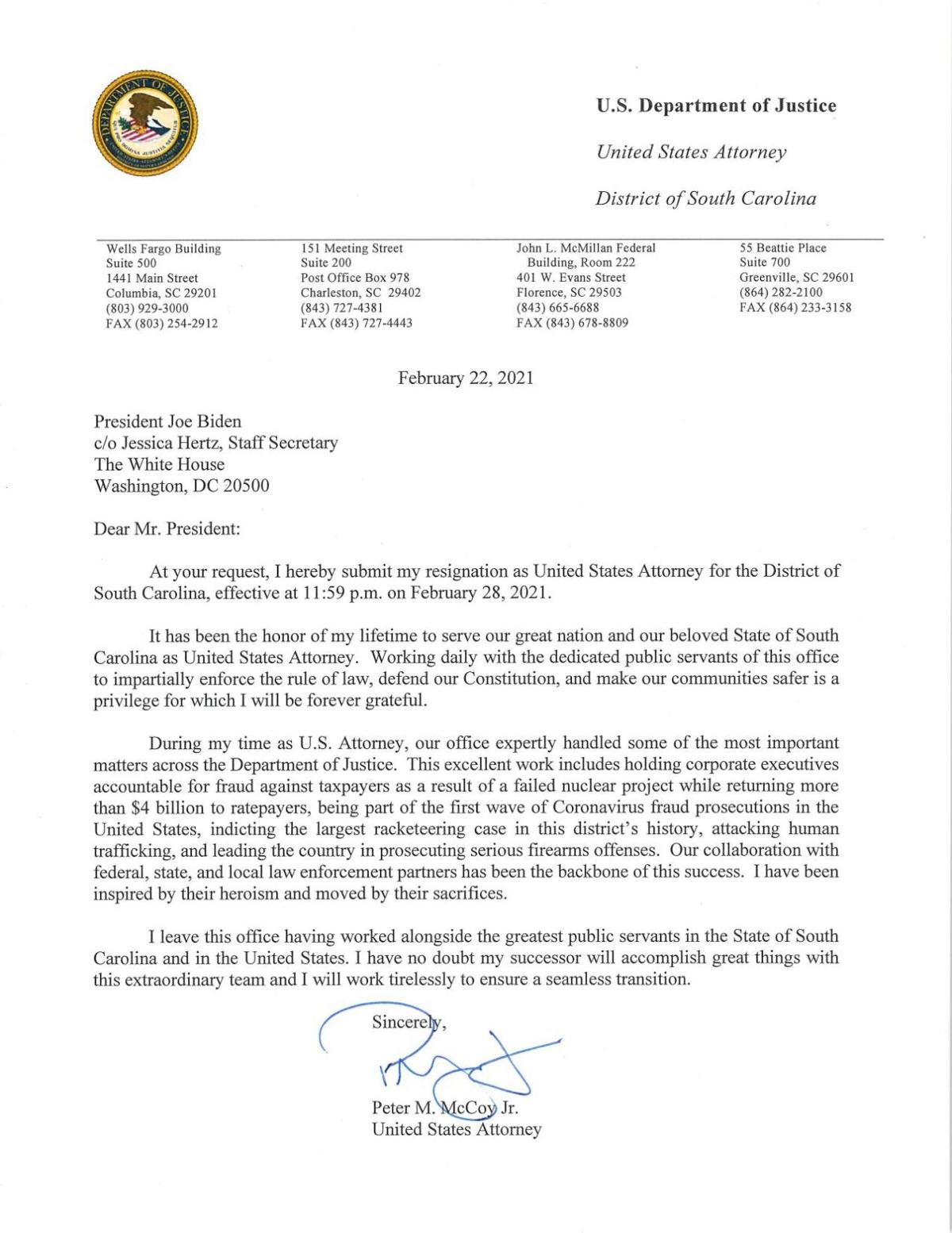 McCoy's extensive record in his short span as U.S. attorney could provide a formidable platform on which to base a campaign to become the state's top lawyer.

Along with the 62 assistant U.S. attorneys he oversaw, McCoy prosecuted hundreds of criminals, netting more than $54 million for the state from convictions in 2020 alone, according to his office.

Soon after getting sworn in amid a burgeoning pandemic, McCoy created a "COVID Strike Team" to investigate coronavirus fraud schemes, hoarding and price gouging.

In one particularly notable case of the more than 150 they reviewed, seven people were charged with laundering over $750,000 in fraudulently obtained funds, including over $390,000 from a Paycheck Protection Program loan.

In what McCoy touted as the largest federal racketeering conspiracy in South Carolina history, he charged 40 defendants in December for building a vast criminal enterprise in state prisons.

He also intensified the office's focus on human trafficking, prosecuting 50 defendants over the last year, and helped with the legal response to riots in Columbia and Charleston last summer and in Washington, D.C., on Jan. 6.

"Peter took this job under difficult circumstances — and there was a pandemic," Nettles said. "And I think he has done a really good job at navigating all of those situations."

But Nettles added that McCoy may find moving on from the job to be easier than he expects.

"I'm one of the few who thinks it's actually better to be a former U.S. attorney than a U.S. attorney," Nettles said.

McCoy said that the guilty pleas of Marsh and former SCANA Vice President Steve Byrne stand out as highlights of his time in office.

Ott recalls talking to cynical constituents as the SCANA investigations began who questioned whether anything would happen, noting those types of high-powered executives at powerful companies often find a way to escape punishment.

"I wanted to say at that time, 'No, we're not going to let that happen,' " Ott said. "But then I thought to myself, they might, yeah, because that really is what people have grown to expect."

So, Ott said, it's "refreshing" to see Marsh and Byrne face accountability — and poetic that McCoy was the one who delivered it to them.

"I'm sure he hates having to leave but I'm glad that he got to see that one through," Ott said. "I'm glad Peter McCoy was there at the very beginning and I'm glad he's there at the end."