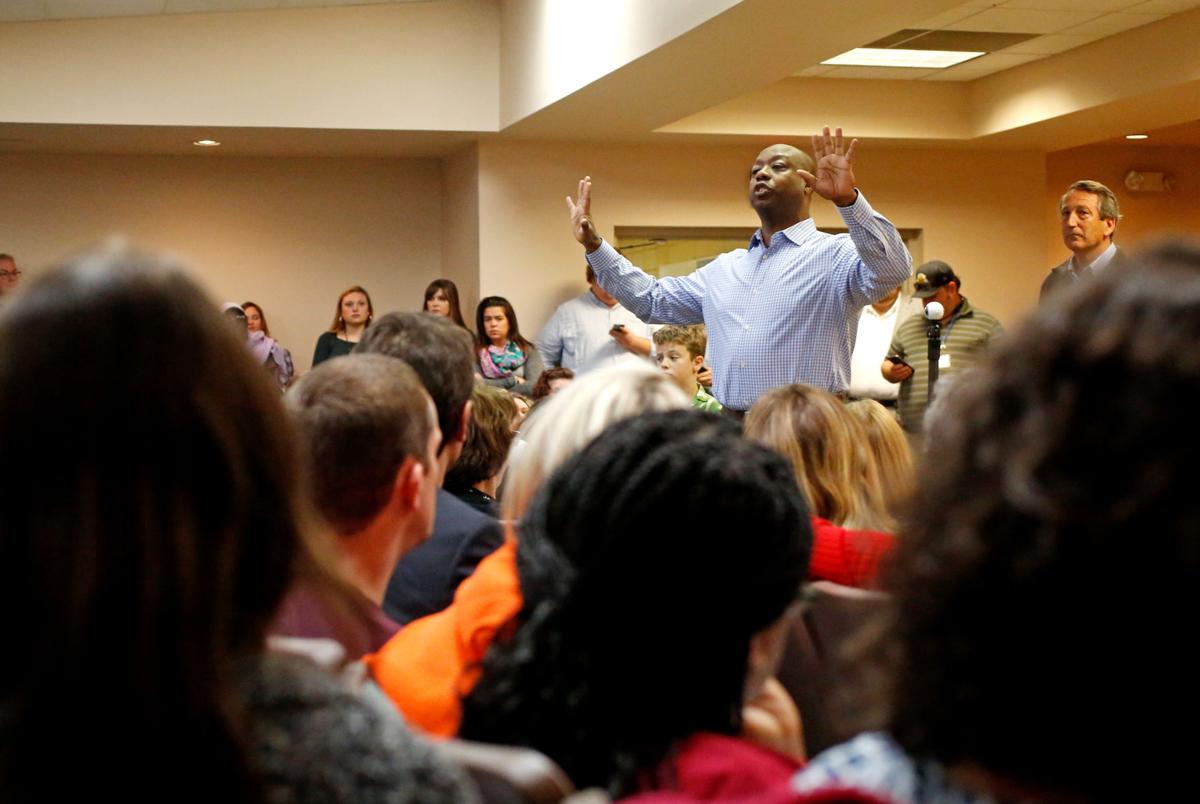 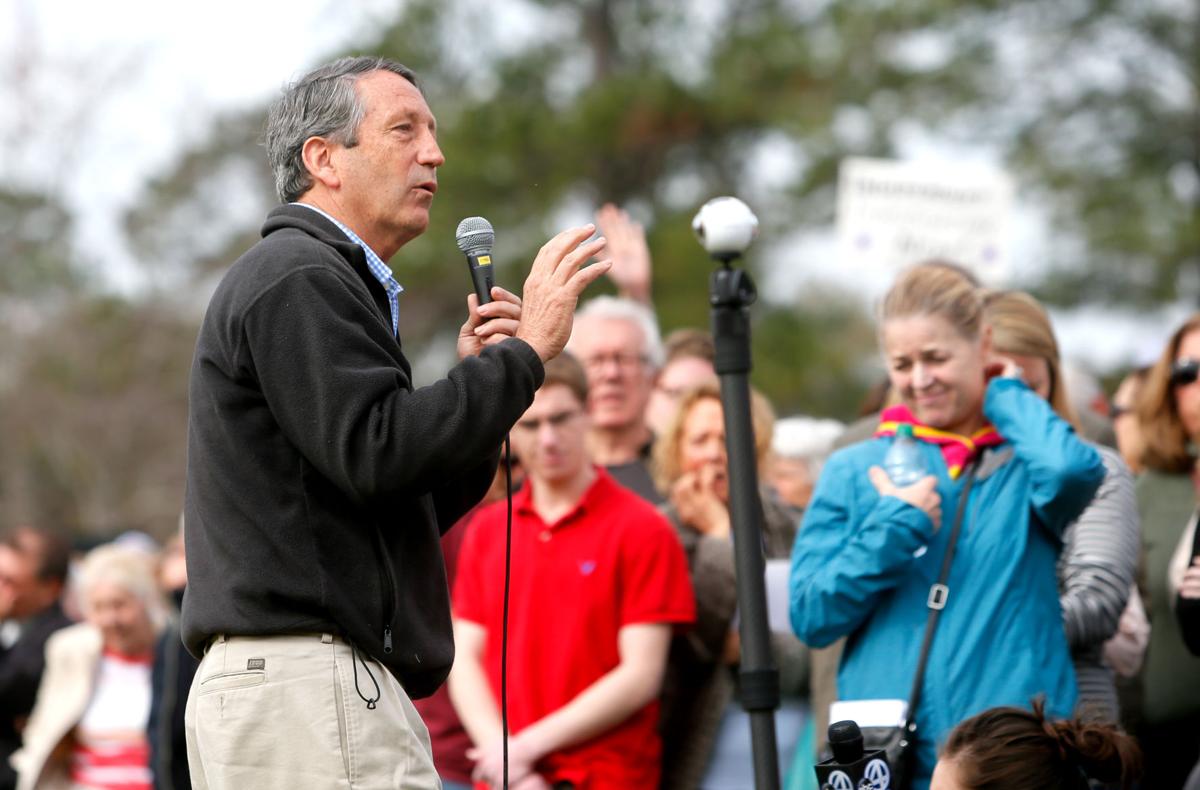 Rep. Mark Sanford addresses the crowd during the town hall in Mount Pleasant on Saturday, Feb. 18, 2017. After the initial meeting inside, Rep. Mark Sanford answered questions in front of few hundred people outside. Michael Pronzato/ Staff 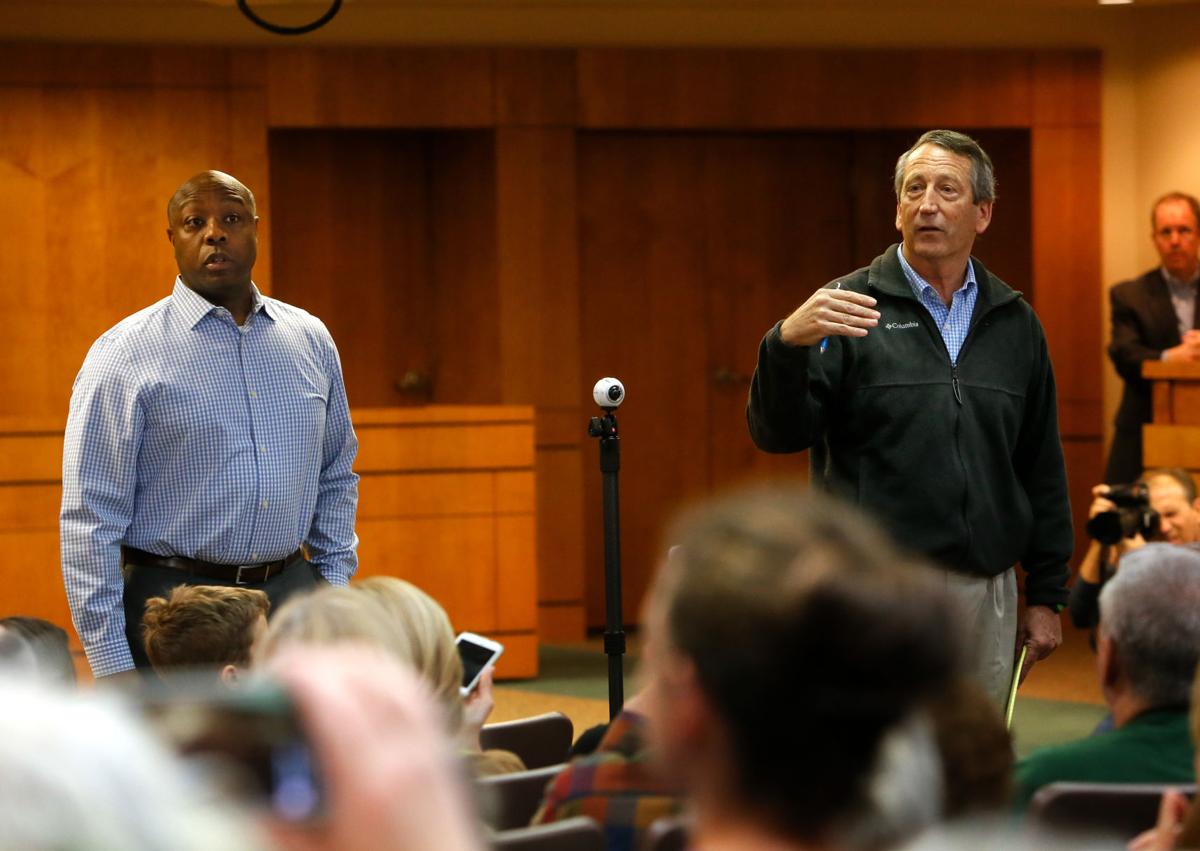 Rep. Mark Sanford addresses the crowd during the town hall in Mount Pleasant on Saturday, Feb. 18, 2017. After the initial meeting inside, Rep. Mark Sanford answered questions in front of few hundred people outside. Michael Pronzato/ Staff

The Republican lawmakers from South Carolina could not get a word in from the start.

Almost every answer U.S. Rep. Mark Sanford and Sen. Tim Scott gave Saturday was deemed unacceptable to the more than 200 people who made their dissent known with boos, interruptions and by holding pieces of paper with the word "disagree" printed on them.

"Agree" was printed on the other side, but few people turned that face over.

The first question set the tone as Scott and Sanford repeatedly found themselves on the defensive on their home turf.

"I don't mean to sound flippant," Ernest Fava began, before referencing President Donald Trump. "But are you personally proud to have this person representing our country?”

The overcrowded room cheered in response.

"Given the two choices I had, I am thankful that Trump is our president," Scott said, as people booed him.

Then, Sanford tried. "I think we're all struggling with it," he said.

So began the 3 ½ hour constituent town hall hosted by Sanford and Indivisible Charleston in Mount Pleasant that was originally scheduled to last one hour. The event drew such an overflow crowd the event had to be broken into two parts.

The first 45-minute session was held inside the town's council chambers while an overflow crowd waited — and sometimes chanted "This is what democracy looks like!"— outside. The second session happened on the football field behind town hall.

In both parts, health care came up again and again. Concerns ranged widely, from an entrepreneur asking what would happen for those with pre-existing conditions, to a tearful mother begging Sanford to think about insurance companies' powers to put lifetime caps on an individual as she held her sick baby.

Sanford introduced a bill this week to replace the 2010 Affordable Care Act known as Obamacare. It was crafted alongside U.S. Sen. Rand Paul, R-Ky., and has the blessing of the House Freedom Caucus, a contingent of about 40 conservative hardliners.

Sanford told one attendee he would not vote to repeal the federal health care law without a replacement.

While Sanford was grilled on health care, the brunt of questions lobbed at Scott were about a decision that has already been made: the confirmation of Education Secretary Betsy DeVos.

"School choice is important. I think when we have failing schools, we should find a way to improve them," Scott said.

A teacher stood up, her voice shaking. "You never once came to my school and asked me what I thought!"

That feeling of not being heard came up repeatedly.

Gray Somerville, 51, from Summerville, who called himself a left-leaning independent who wasn't normally interested in politics, said he'd had it.

"Ever since the election, I have felt like a passenger in a car that’s being driven by a drunk driver," he said, prompting the largest applause of the morning.

In many ways both South Carolina lawmakers expected the vitriol was coming. When U.S. Rep. Jason Chaffetz, held a similar town hall earlier this month outside Salt Lake City, the Utah Republican faced a booing crowd in his home district. Even ahead of Saturday’s event in Mount Pleasant, Sanford and Scott told the media they had clues about what they might face.

“We’ve probably gotten more calls, emails, letters — and whatnot — on the issue of the Affordable Care Act than any issue since I’ve been back in Congress,” Sanford told reporters before the town hall began.

Scott, whose phones were so jammed ahead of the eventual confirmation of DeVos that constituents complained of getting a busy signal, said he's had more calls in the first five weeks of this year than any other five-week period combined.

Some disagreement remained about the best ways to engage with constituents and the overall effectiveness of these town halls.

Scott suggested to a small group afterwards that there might be a better way.

“That (town hall) is not necessarily the most productive and constructive ways for us to engage and disagree,” he told them. “If we’re going to have a chance to disagree, then we should be able to ask a question, and speak my answer. You can hate my answer and not vote for me.”

At the end of the two-part event, Sanford told the crowd he would stick around. People swarmed him immediately, itching for more time and asking him more questions.

Sanford walked past the bleachers, where two posters had been left behind. One said "SAVE THE ACA!" The other said "Truth Matters Hold Trump Accountable!"

Sanford kept walking, and his constituents followed. Then, Sanford leaned against his car and listened.