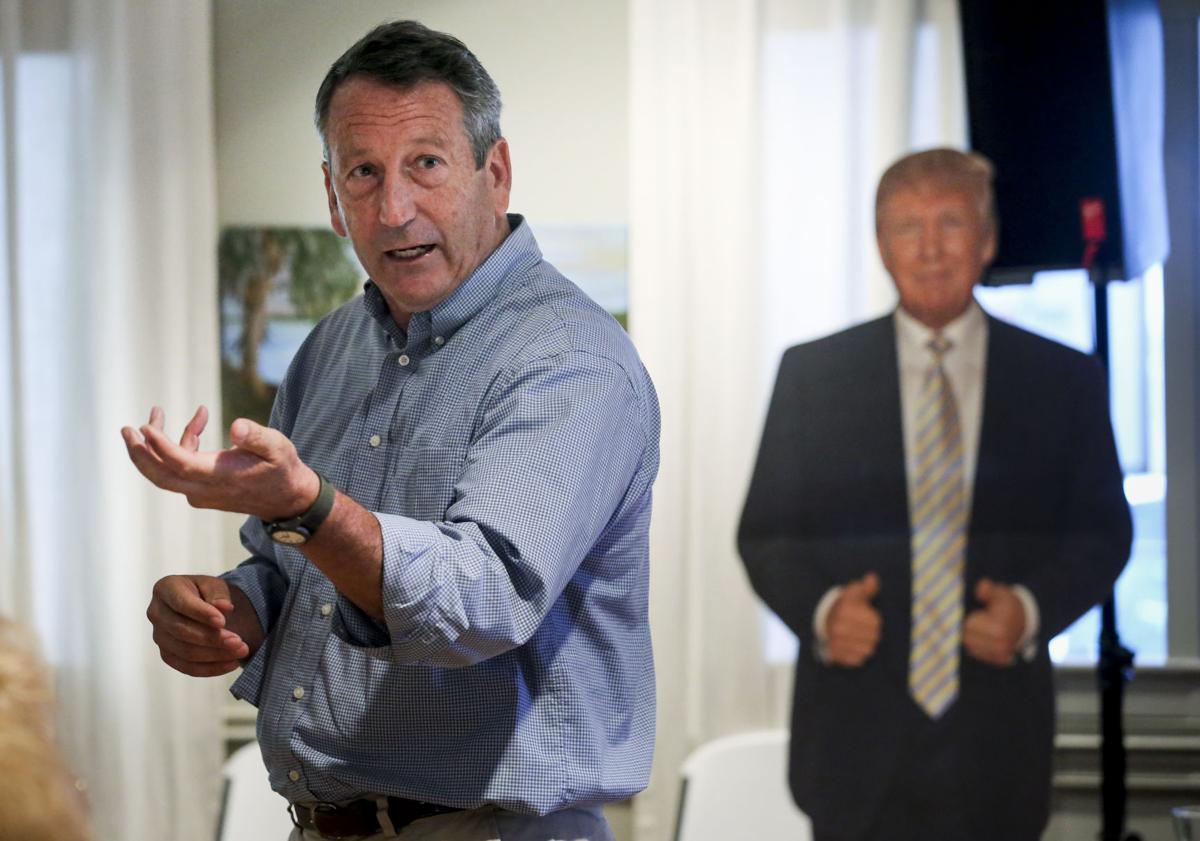 Mark Sanford speaks at a 2018 candidate's forum in Mount Pleasant which featured a cutout of President Donald Trump. Sanford is considering a run for president. File/Grace Beahm Alford/ Staff 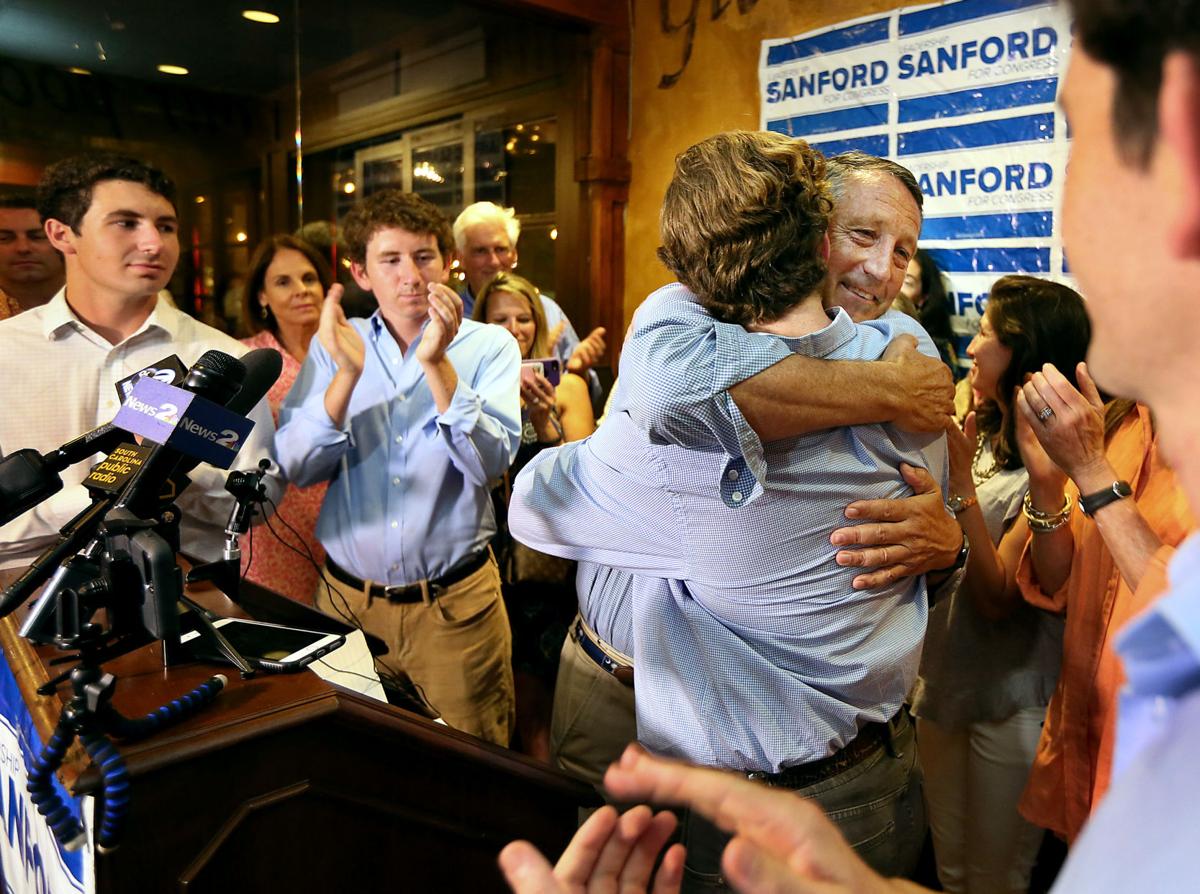 Mark Sanford hugged his sons after addressing his supporters at Liberty Tap Room in Mount Pleasant on the night of the 2018 primary in which Katie Arrington defeated Sanford. File/Staff 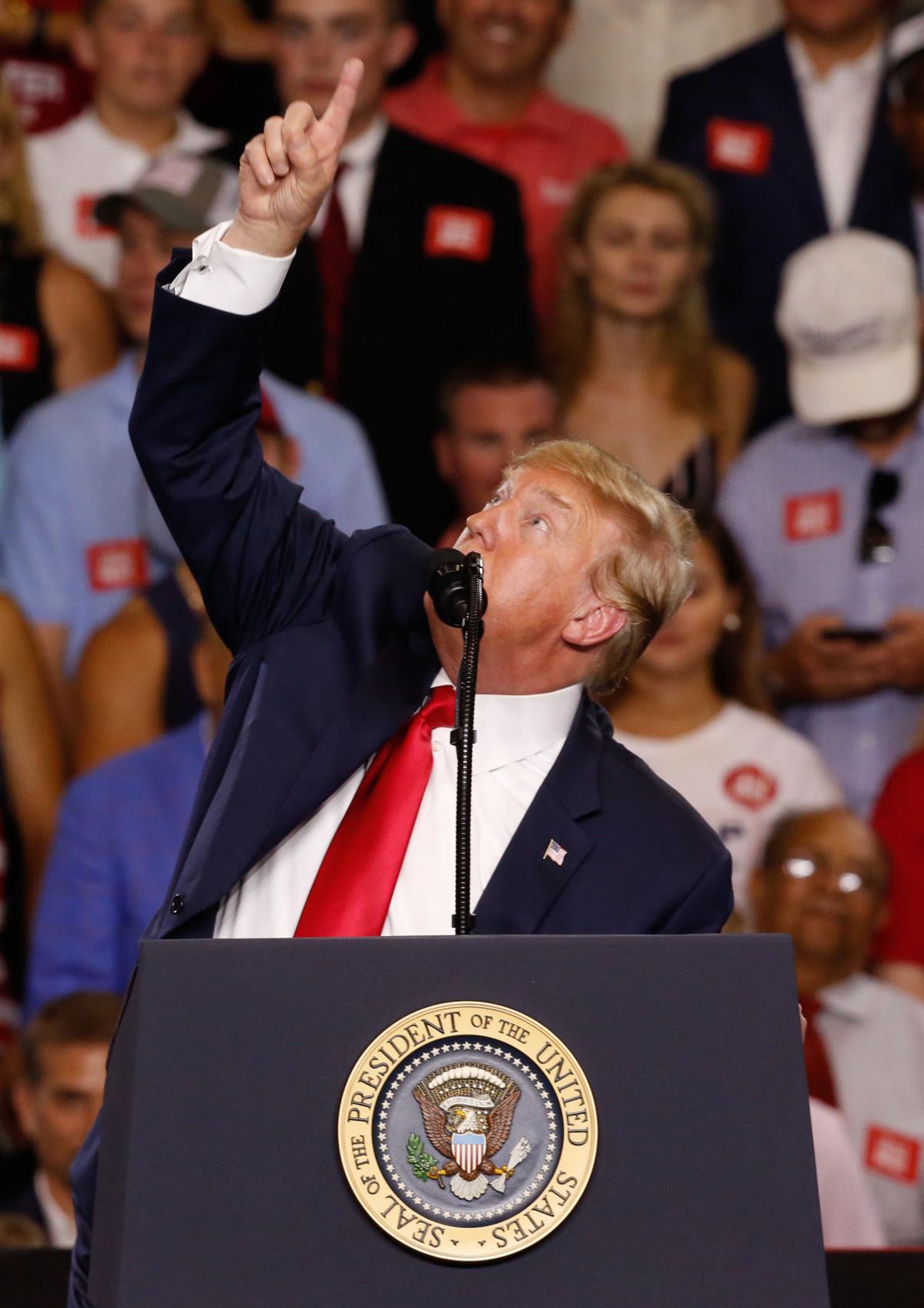 Almost a year after President Donald Trump urged voters to reject Mark Sanford, the former South Carolina congressman is considering a Republican presidential run of his own against Trump in 2020.

Sanford, in an interview Tuesday with The Post and Courier, confirmed he will take the next month to formulate a potential run against Trump as a way of pushing a national debate about America's mounting debt, deficit and government spending.

He would run as a Republican.

Does Mark Sanford have a chance if he runs for president against Trump?

If he does get in the race, Sanford faces mammoth odds against getting any traction within the Republican Party. Hours after news broke of Sanford's possible presidential bid, he faced blunt condemnation from his own South Carolina Republican Party.

"The last time Mark Sanford had an idea this dumb, it killed his Governorship. This makes about as much sense as that trip up the Appalachian Trail," S.C. GOP Chairman Drew McKissick said in an emailed statement. The comment was later shared on the S.C. GOP Twitter account, which features a banner image of a Trump-Pence campaign logo.

The S.C. Democratic Party also weighed in on the news, welcoming a Sanford run while also taking a jab at Trump.

"Always nice to see a candidate with fewer extra marital affairs than the president," the S.C. Democratic Party tweeted.

Republicans in South Carolina would have to agree to hold a primary for Sanford to be on the ballot, but the path is much easier for Sanford to be considered in Iowa, which holds an open caucus, and New Hampshire where there's just a $1,000 filing fee to get on the 2020 GOP ballot.

Mark Sanford at Post and Courier Pints and Politics

Mark Sanford will appear July 25 at The Post and Courier's Pints and Politics gathering.

For tickets go to: postandcourier.com/pintsandpolitics

So far, only former Massachusetts Gov. William Weld has formally announced a challenge versus Trump.

Sabato said Sanford would come to the challenge with relatively high name identification both in South Carolina and nationwide.

"Never Trump" Republicans have been trying to recruit a candidate to challenge the president but have had no success.

Since leaving office in January, Sanford said he has been privately mulling whether to run for the nation's highest office. He described the internal debate as a drumbeat that never went away.

"I'm a Republican. I think the Republican Party has lost its way on debt, spending and financial matters," he said.

'It's like emotional torture': The day Mark Sanford lost it all

Sanford, who most recently had been teaching as a fellow at University of Chicago’s Institute of Politics, conceded he had been waiting to see if any other high-profile Republicans, such as former Ohio Gov. John Kasich, would primary the president.

U.S. Rep. Justin Amash of Michigan, who earlier this month publicly left the Republican Party, has not ruled out a presidential run himself.

Amash, who worked with Sanford in the conservative House Freedom Caucus, shared the news of Sanford's potential bid on Twitter with the “100” symbol emoji.

If he finds a presidential run is not viable, Sanford said he might pursue setting up a think tank aimed at addressing the deficit. Sanford also said he has no interest in running for his former 1st Congressional District seat anchored around Charleston, a post he held from 1995 to 2001, and again from 2013 until 2018.

Hicks: From Appalachia to Tallahassee, this land was made for Sanford's candidacy

Sanford’s announcement comes as Trump faces renewed fire, even from some Republicans, over racist comments directed at four Democratic congresswomen who are minorities.

Sanford did not address that latest controversy until a televised interview on CNN Tuesday afternoon.

"I think that they're noxious and they're weird," Sanford said of the president's comments, who later described it as "more inflammatory rhetoric from the president."

Sanford and Trump's acrimonious relationship goes back more than a year. In a late-afternoon tweet on the day of Sanford's 2018 Republican primary loss, Trump asked state voters to replace Sanford with Katie Arrington, going so far as to say Sanford is "better off in Argentina," a reference to his extramarital affair when he was governor in 2009.

The message was delivered less than three hours before the polls closed, illustrating Trump’s willingness to take out one of the few Republican congressmen who had called out the president for his sometimes crude behavior.

During his concession speech in the 2018 midterm election, Sanford told his supporters, "I stand by every one of those decisions to disagree with the president."

The feud between the two Republicans didn't stop there.

A week after Sanford lost his GOP primary race, Trump reportedly made fun of the Charleston Republican in a closed-door meeting with House Republicans, where some members of Congress reportedly booed the president for his comments.

Trump denied the reports, tweeting the following day that Republicans "applauded and laughed loudly" when he picked on Sanford.

Trump then took the ridicule into Sanford's home state. While campaigning for Gov. Henry McMaster, Trump knocked then-Gov. Sanford's 2009 extramarital affair, an incident forever tied to Sanford’s lie that he was "hiking the Appalachian Trail" when he was on a trip to Argentina to see his mistress.

"The Tallahassee Trail – must be a beautiful place. Unfortunately, he didn’t go there," Trump said, mixing up the reference, at a rally in Cayce.

In a deep dive into Sanford's background and career, The Post and Courier described his spectacular political collapse and his drive for redemption in the 2013 congressional race, which he won. A presidential bid would certainly add a next chapter to that story.

A presidential bid had been speculated once before in Sanford's political career. While governor, he was considered a conservative favorite for the presidency based on his rising profile as chairman of the Republican Governors Association. He became a household name when he rejected President Barack Obama’s stimulus funding in 2009.

If Sanford's run does progress to the primary stage, he could find a friendly reception in South Carolina, which is third in line in the calendar behind Iowa and New Hampshire.

McMaster told The Post and Courier in March he would support the state holding a primary if a legitimate challenger against Trump came forward.

Even though McMaster remains one of Trump’s staunchest allies, he said he’d welcome Republicans hosting a primary as a means of growing the state's GOP majority and protecting South Carolina’s first-in-the-South voting status.

The S.C. GOP’s Executive Committee will meet Sept. 7 to discuss the chance of holding a 2020 presidential primary. They have to inform the Republican National Committee of their intent by Oct. 1, as do all the states holding GOP primary votes.

Schuyler Kropf and Robert Behre contributed to this report.

1994: Mark Sanford, who has no prior political experience, wins the 1st Congressional District seat largely on a Republican message of fighting government spending.

2002: After serving three terms in Congress, Sanford makes his first political return by being elected governor.

2009: After winning his second term, Sanford's tenure as South Carolina governor implodes when he is caught returning from Argentina visiting his mistress. His marriage breaks up and he survives the rest of his term but is politically wounded.

2013: Sanford marks another political comeback, winning his former seat in Congress after a succession of vacancies. Jim DeMint quits his Senate seat and U.S. Rep. Tim Scott is picked by Gov. Nikki Haley to fill the vacancy, leaving the door open for Sanford to return.

2019: Sanford fuels more comeback speculation after announcing he may run for president against Trump also as a Republican. Decision to come in the next 30 days.