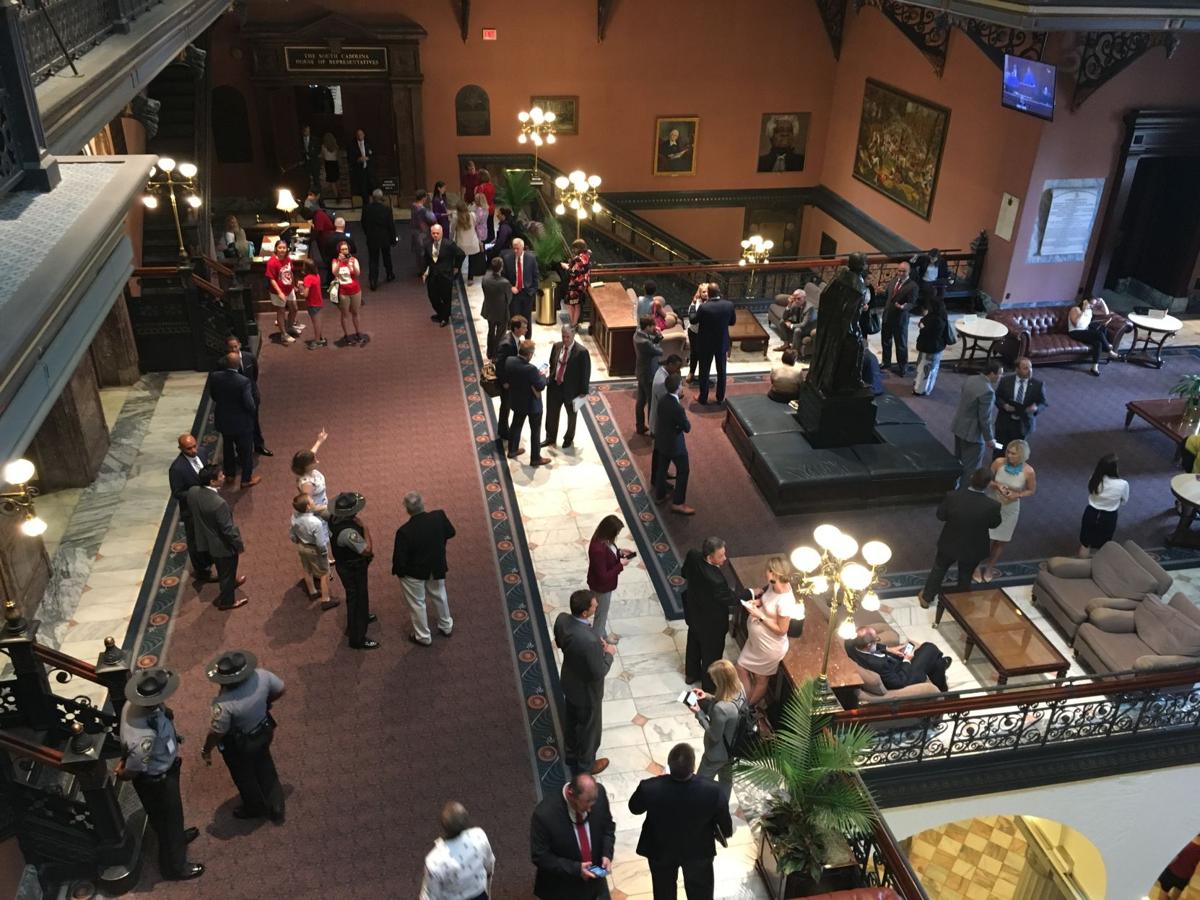 While an estimated 10,000 protestors rallied outside the Statehouse on Wednesday, May 1, it was business as usual inside. Teachers and other protestors wearing red wandered inside periodically in small groups but did not disrupt the session. Seanna Adcox/Staff 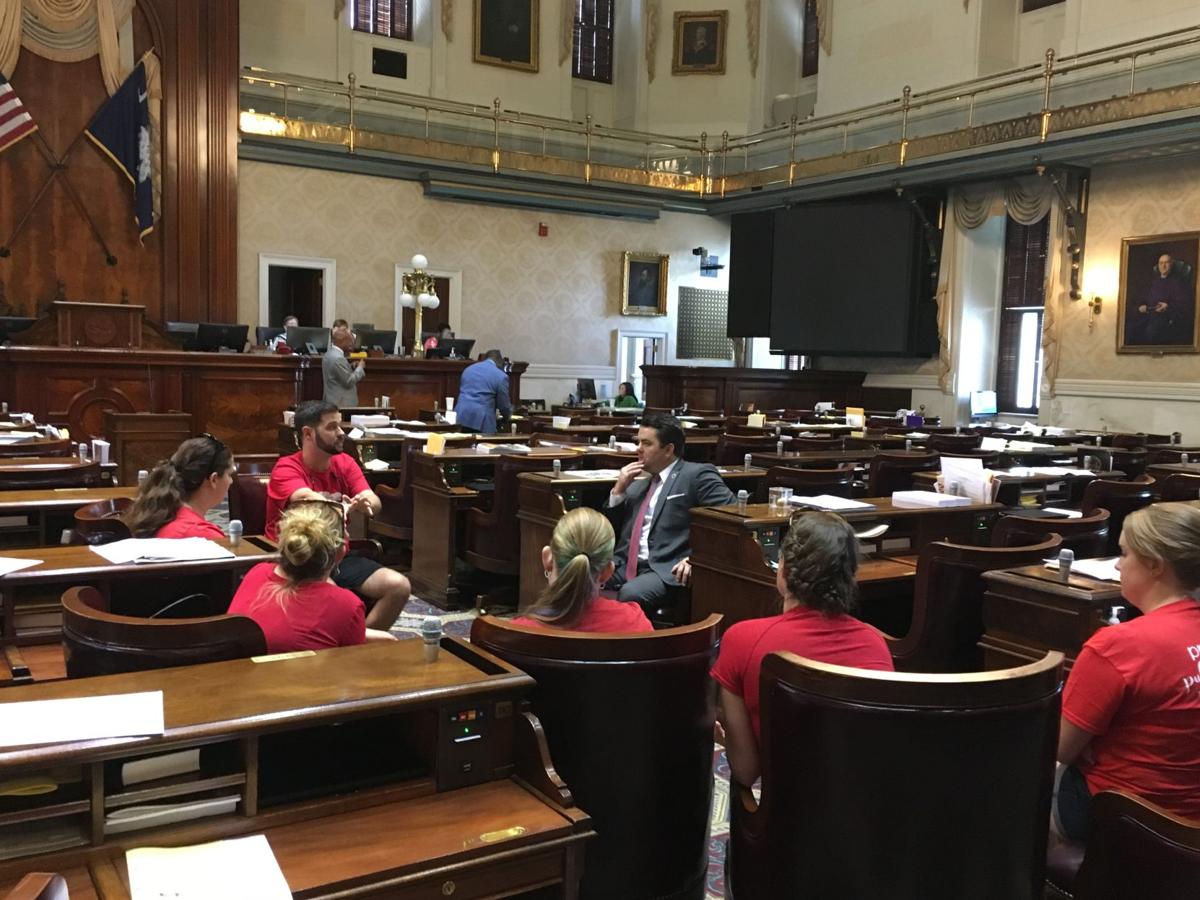 Rep. Micah Caskey, R-West Columbia, met with a small group of Lexington 2 teachers inside House chambers on Wednesday, May 1, after the rally ended outside the Statehouse. Seanna Adcox/Staff 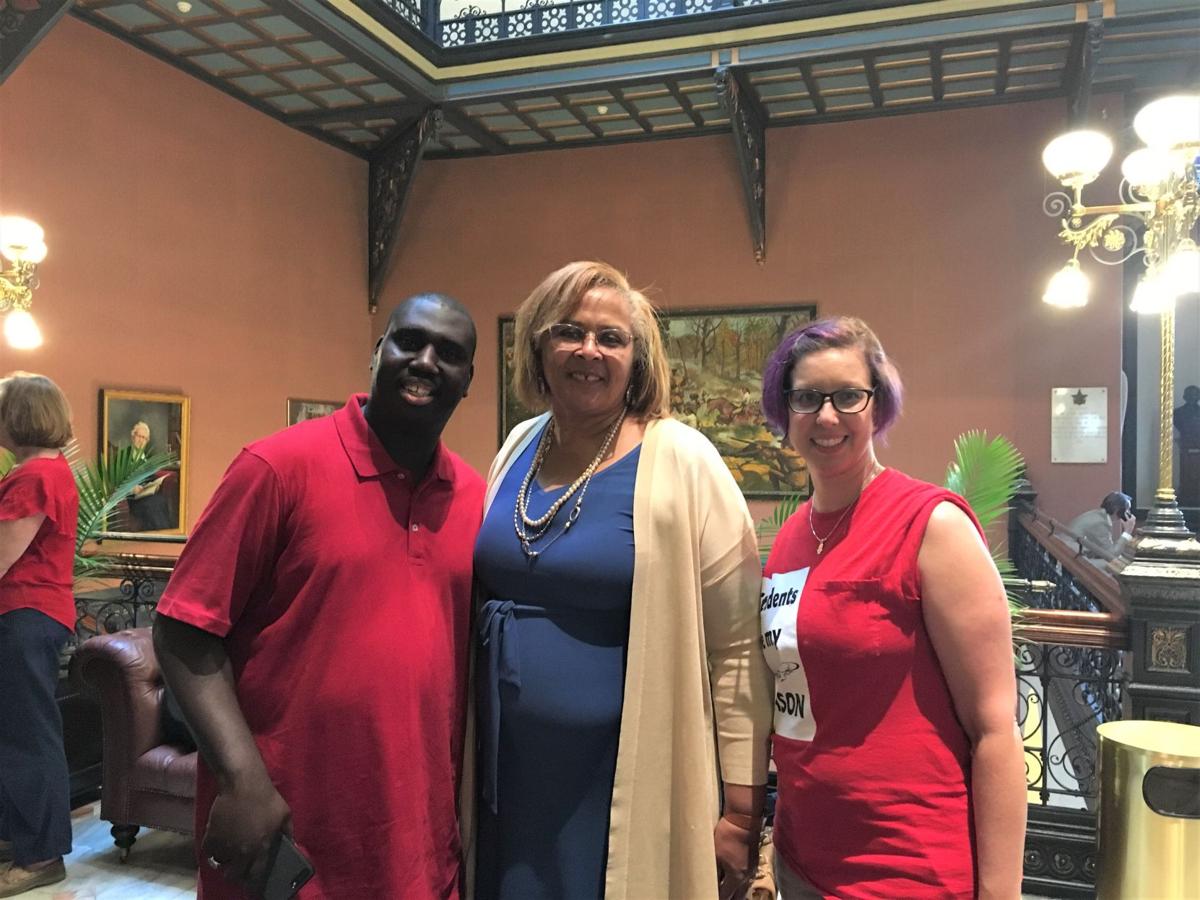 Sen. Margie Bright Matthews, D-Walterboro, stops in the lobby to pose with Davaron Edwards and Christina Randall, band directors in Jasper County schools. The two were among teachers who temporarily came inside the Statehouse as the rally continued outside Wednesday, May 1. Seanna Adcox/Staff

While an estimated 10,000 protestors rallied outside the Statehouse on Wednesday, May 1, it was business as usual inside. Teachers and other protestors wearing red wandered inside periodically in small groups but did not disrupt the session. Seanna Adcox/Staff

Rep. Micah Caskey, R-West Columbia, met with a small group of Lexington 2 teachers inside House chambers on Wednesday, May 1, after the rally ended outside the Statehouse. Seanna Adcox/Staff

Sen. Margie Bright Matthews, D-Walterboro, stops in the lobby to pose with Davaron Edwards and Christina Randall, band directors in Jasper County schools. The two were among teachers who temporarily came inside the Statehouse as the rally continued outside Wednesday, May 1. Seanna Adcox/Staff

COLUMBIA — Many Republican legislators applauded teachers for exercising their free speech rights Wednesday in an unprecedented showing outside the Statehouse, though their voices could scarcely be heard inside, where it was business as usual.

But for some, the quiet inside masked a growing sense of frustration — frustration about the state of public education, about an education reform bill that appears stalled for the year and about whether the protest outside would do any good.

Gov. Henry McMaster felt the frustration. "Everybody’s frustrated,” he told The Post and Courier in his Statehouse office during the rally. “I think everybody knows we have to fix our weak spots in education or we risk losing a lot.”

The muffled roar of 10,000 teachers, parents and activists drifted into the second-floor lobby in short bursts whenever the door swung open for curious legislators to walk outside and gawk or, in the case of a few invited Democrats, address the crowd.

"I feel strongly our teachers definitely should have the opportunity to express their voices," said House Education Chairwoman Rita Allison, R-Lyman.

But she and other Republicans said the teachers' energy could be better spent voicing their concerns individually with legislators — as some did after the shouting died down outside.

"It's sad that it's come to this," said Rep. Micah Caskey, R-West Columbia, who met with a group of Lexington 2 school district teachers in House chambers. "It was great to see teachers have their voice heard. They certainly made their presence known. We hear you. What do you want specifically?"

Inside the Statehouse, there was no shouting.

Small groups of teachers trickled in to use the bathroom — something many complain they don't have time to do during the school day. Some wandered upstairs and posed with legislators.

But all used their inside voice. Asked why, some said being polite is just part of being Southern.

Even though we're protesting, "we also know how to be professionals," said Christina Randall, a middle school band director in Jasper County.

Legislators of both parties don't expect the protest to impact this year's budget or spur movement on a massive reform bill — which has stalled in the Senate — in the remaining four days before the session's scheduled end.

Sen. Tom Davis, who mingled with the crowd, said he found his conversations illuminating. The Beaufort Republican said despite the shouts for higher pay, which teachers deserve, in his one-on-one conversations, their primary concern was to have the ability to do what they love — teach — without excessive paperwork, testing and discipline disruptions.

"That was important to hear," said Davis, who wants to cut districts' administrative costs to put more toward teachers' salaries. "It's on us to make sure dollars get to the classroom."

He said he does expect education reform legislation to pass next year.

Rep. J.A. Moore, who donned a red shirt to address the crowd, said Wednesday's protest was "exactly what we needed to make systemic, generational change."

"Now, we are all listening. The theme is, 'What now?'" said the North Charleston Democrat. "You have to lobby over the summer. You need to meet with your legislators multiple times and build relationships, and next year, we need to make education our top priority again."

But House Speaker Jay Lucas, R-Hartsville, worried the rally would backfire, eroding support in the Republican-controlled House that has led on reform efforts since the state Supreme Court declared in 2014 that the state fails to provide poor, rural students the opportunity for even a minimally adequate education.

He noted that Chief Justice Don Beatty, who disagreed with his colleagues in 2017 in lifting the court's oversight of the ruling, did credit the House for trying. In his dissent, Beatty commended the chamber for "leading the other defendants toward a promising new approach to education in our state."

Lucas said he really felt coming into 2019 the Legislature would finally pass bold improvements to education, as he, McMaster and Senate leaders all pledged this would be the year. But the bill he filed in January toward that effort was immediately opposed by SC for Ed, a teachers' group that organized Wednesday's protest. After the House passed the bill overwhelmingly, the Senate slowed down the process, as the group demanded.

"I'm frustrated because the process seems to be grinding to a halt. We can't lose an additional generation of students because of our systemic problems," Lucas said. "I don't see the momentum continuing."

As to teachers' complaints that he filed his bill without their input, he said the measure was the product of years' worth of study and listening that included meetings at schools across the state throughout 2015 by a House panel he put together.

And he noted changes were made at teachers' request, including 30 minutes of duty-free time daily and striking the ability for high-performing schools to fill up to 25 percent of their staff with non-certified teachers considered experts in their field — something he now regrets. Doing that could go a long way toward meeting teachers' demands for smaller class sizes, he said.

"We can't address class sizes until we get more teachers in the profession," Lucas said.

Lucas blamed much of the opposition to misinformation spread by groups he declined to name, adding he doesn't fault teachers for that, as they're busy and rely on others to tell them what's in it.

He encouraged teachers to delve into it for themselves and help come up with solutions. While fixing the system requires more quality teachers and stemming the growing shortage, he said, the measure is not meant to be only about teachers.

"We are desperate for input from anybody who can help us with these issues," he said. "The teachers are the backbone of our education system, but at the end of the day, it's about students receiving the kind of education they deserve."

What's in the state budget for K-12 schools?

House leaders stress that, even while the major education reform bill is stalled in the Senate, many of the demands teachers rallied for Wednesday are at least partly addressed in the state budget for the fiscal year beginning July 1. Differences between the House and Senate budget plans have yet to be worked out. But here’s a look at what’s in legislators’ 2019-20 proposals for K-12 schools:

_$159 million to give teachers with fewer than five years of experience raises of up to 10 percent, while guaranteeing other teachers 4 percent. That represents the largest single-year raise for teachers since 1982. House Speaker Jay Lucas reiterated Wednesday his goal is to bring teachers' average pay up to the national average over several years.

_$2.2 million additional for mental health counselors, to hire 90 who can roam from school to school as needed. It represents the third consecutive increase toward the goal of having one in every school by 2020.

_The Senate plan suspends three end-of-year state-standardized tests next year — social studies tests in fifth and seventh grades, as well as the eighth-grade science test — to help ease concerns over incessant testing. That is a piece of the major reform legislation.

_The House plan sends Commerce $85 million to spend on infrastructure needed to recruit businesses to the poorest school districts, which can include schools. The Senate plan sends $50 million.

_$20 million for textbooks and other instructional materials